Charles and Sarah sitting in a tree, m-a-t-i-n-g.

Sunday, November 27, 2011
Amazing. Charles and Sarah mated last night. In the rain and four days earlier than I have ever seen them mate. Incredible.
I got to the park just around sunset and it was already quite dark due to the rainy skies. The rain was steady but it was warm out with temperatures in the high50s to low 60s. Thankfully, I had received a helpful text from my friend and owl mentee, Brenda Hente. Brenda had gone to the park in the morning before the rain hit. She let me know that Charles was in his favorite conifer and Sarah was in her autumnal perch. Thank you, Brenda!
Sure enough, as I approached their territory I could hear Charles hooting and he was still in his favorite conifer. Due to the rain, I just had my point-and-shoot camera and my binos on me (under my umbrella) so my picture/video quality is decent but not as good as it would be on a non-rainy day. Here's Charles captured in mid-hoot: 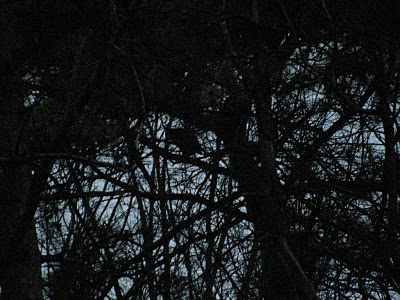 I went looking for Sarah and she soon hooted in reply. Judging from her call, I was confident that she was no longer in her autumnal perch and may have sought a tree offering greater protection from the rain. I heard her again and determined that she was in The Overlook Hotel Tree. Just as I was approaching this tree, she flew out and landed, as she had for the previous three nights, in The Jungle Gym Tree near The Archy Tree. Here she is, also in mid-hoot: 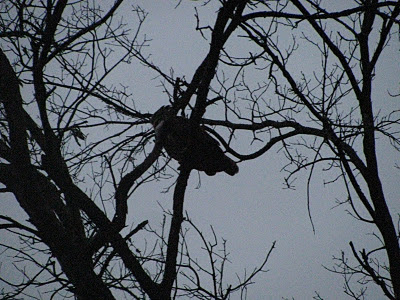 She was completely exposed to the rain and I made a prescient but inadvertent and innocently innuendo-filled pun by saying, "Sarah's gonna get pretty wet." Ah, thankyouverymuch.
The duet increased in tempo, frequency and yes, intimacy. Charles began his intimate hoots that have a purring quality and also sound like he's practicing rolling his Spanish by rolling his Rs. More "hurr hurr" then "hoo hoo." That said, they had done exactly this type of duetting over the last three nights in the same spots and each night the duet was cut short. Charles would leave to go to nest hollow of The 2008 Nest Tree. Sarah would remain in this jungle tree and hoot a few times before flying east. I would reacquire Charles and he would begin to hoot again but the duet was over.
This was not to be the case on this night. Charles flew out a short distance and landed in a deciduous tree near The Cut-In. Upon landing he hooted loudly and also hooted some one syllable hoots in short succession. I've heard him make such calls after mating and after hearing them tonight I dubbed them "Choo-Choo Hoots" as they are reminiscent of a steam train. Sarah flew and landed close to Charles. The duet continued intensely. Sarah flew past Charles a little waya but the duet continued and he flew to her and they mated. Check it out and crank your volume:

Just incredible. Last year, I first saw them mate on November 30. Prior to that the earliest I saw them mate was in 2009 on December 6. And now in 2011, mating on November 26. I saw them mate on Xmas Eve last year as it snowed but never before in the rain. I called Wendy, my girlfriend, to tell her the news and she was thrilled.
The night continued to amaze. Charles had flown towards The Middle Conifers and after a brief pause, Sarah followed in that direction. I didn't find either of them in this glade but I found Sarah nearby in The Mixed Glade just before she flew north. I reacquired her in a glade of conifers on the south bank of the lake before she continued north. ESL (Experience, Skill, Luck) was flowing last night and I found her just north of The Right Hand Tree. She stayed there for a while and then I heard Charles hoot, first from the east and then from the north.
In a flash, Sarah flew off and I lost her in the horizon line but she not gone far but had gone to a fascinating spot. She had landed on the cable of the bridge just north of The Right Hand Tree. I had never seen one of the owls on this bridge before and it was wild that she was not on the bridge structure but on the cable. Also unlike her previous perches which were sheltered, she was wide open to the rain, which increased in tempo and volume.
Charles' hooting ceased. Sarah remained on the bridge for many minutes. I saw her look east, bob her head from side-to-side for greater depth perception and then fly east along the waterway. I found her just as she flew further east and I'm reasonably certain that I flushed her. I pride myself on a stealthy, cautious approach but there are times when one approaches too close too fast and they fly away. As always when this happened, I apologized and cursed my lapse in stealth. I found her roughly parallel west of The 2008 Nest Tree.
As Wendy and I had dinner reservations I took my leave but my night with the owls was still not done. I heard Charles hoot twice more from the south bank of the lake. I smiled and bade the owls good night and good luck. Wendy and I had a great meal at the superb restaurant Harvest in Richmond Heights. We've dined there several times before and it is always tremendous. I commented to Wendy that it was an especially appropriate choice of restaurant on this night. I saw the owls sowing seeds and we went to Harvest. Thanks for reading!
Posted by Mark at 4:25 AM 2 comments: