A big day-Mo no longer MIA!

After the cold and grey of the day before, this day's clear and warm weather were most welcome. Initially I had my ears uncovered (hat on, of course) and I wore lighter gloves. I headed to the south side of The Wooded Area and found Edward Crim and Mark (whose last name I can't recall) across the road from the Trio Conifers. Edward was borrowing Don Love's monster lens. It is a heavy lens but it takes amazingly close photos. 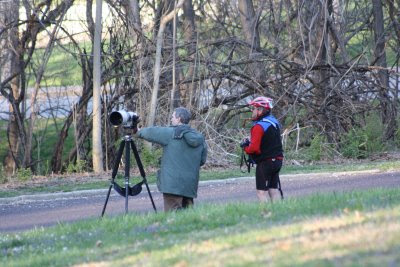 As I made my way down the hill I saw Charles in his Favorite Conifer. Edward and Mark had staked out a spot that gave them a good view of Sarah in one of the big deciduous trees east of the Trio Conifers. Charles hooted twice in quick succession for his first hoots of the day. It is unusual for him to hoot like that so early in the evening. Usually rapid hooting occurs after "warming up" at a more gradual rate. In my observations, Charles' average high rate of hooting is 3 hoots a minute. Sarah took off and relocated deeper into The Wooded Area.

Charles flew off, south/southwest towards The Second Catalpa, landing possibly in The Feeding Tree. We heard some begging cheeps and we went to relocate Charles and the source of the begging cheeps when Sarah landed above us in the December 17th Tree. Just then, Charles flew back and landed in a deciduous tree just east of his favorite conifer. We could see both owls easily, Sarah in the foreground and Charles in the background, a rare and gorgeous sight to behold. 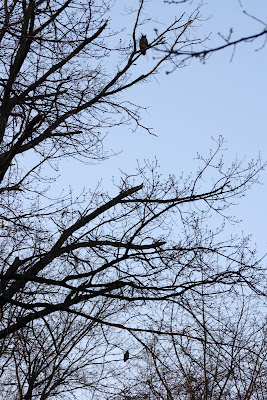 Sarah did some what I call vampire grooming of her left wing. In vampire grooming, the owl grooms the interior of its wing and surrounding areas in a way that looks like a Dracula character lurking behind its cape. 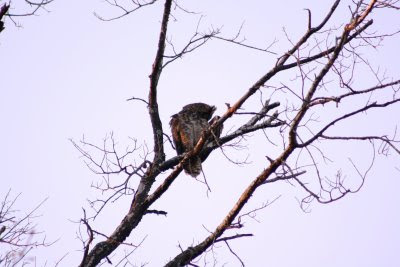 Sarah then flew off past Charles and landed near/in The Quintet Conifers. She continued eastward with a blazing flight which took her, as I guessed correctly, to The Eastern Tree. We headed out to follow her and Edward pointed out the gorgeous, nearly full moon. We reacquired Sarah in The Eastern Tree and enjoyed seeing her perched on one of the tree's highest points.

With Mo unfound and Sarah departed, we began to discuss where to go next when Edward had an unpleasant realization; the binoculars he had carried were no longer with him! We went through the drill of where he had last used them/seen them. He was pretty confident that he had used them on the north bank of Post-Dispatch Lake and around the Suspension Bridge, so we agreed to head out to these destinations.


To say that going in this direction turned out to be serendipitous is an understatement. We had just started heading north when I spotted an owlet midway up a large deciduous tree close to the water way-it was Mo!! I could tell it was Mo and not Art by Mo's smaller size and less developed plumage. We marveled at finding him and wondering how he got there. He fledged about the same distance that Art had. However, whereas Art fledged to The Wooded Area to be with his parents, Mo had gone the same distance from the nest tree but in the completely wrong direction. How did he get over? Was it a mistake on his part, an independent streak or was there some precipitating incident (threat of a predator, owlet curiosity and foolishness) that led him to be so close but so far from the protective eyes of Charles and Sarah?

Unfortunately, we were not the only ones to have found Mo. Several American Robins were mobbing him with loud warning calls and close fly-bys. Mo dodged them as best as he could all the while emitting begging cheeps. It was a hard sight to take in and while I had decent confidence that Charles and Sarah would hear Mo's begging cheeps; I couldn't help but fear that Mo might come to an all too premature end. This is a very vulnerable stage for owlets both from predators and injuries incurred when flying and landing. At the same time, their food demands are still quite high and if Charles and Sarah lost track of him, starvation would be a very real danger. 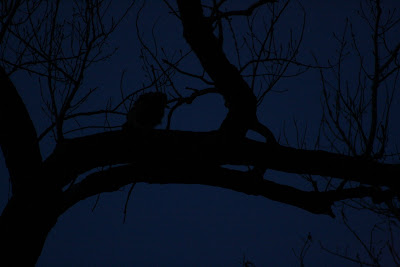 We reluctantly left Mo to continue our search for Edward's binoculars. Our search failed to turn up the binos so with additional reasons for concern we headed back to reacquire Mo before heading home.

Just as we approached Mo's tree, one of the adult owls, most likely Sarah, went flying off east from the same tree, just a short distance from where Mo was perched! This sight heartened us immensely! At least one of the parents knew where Mo was and they could feed him and keep some watch on him. I think it was Sarah judging by the size of the owl and that female Great Horned Owls take the lead in the feeding and protection of owlets. The male Great Horned is focused on obtaining food for the family.

While we were thrilled to see one of the parents close to Mo, I reminded myself that Mo's position away from his parents' roosting sites still put him in a pernicious situation. Luckily the good turn of events did not end with the owls as Edward found his binoculars. They were in his jacket or backpack the whole time! We had a good laugh about that and I gladly accepted Edward's kind offer of a ride back home. I couldn't wait to get home and tell Wendy about Mo and everything else.

I received a call on this day from my friend, colleague and fellow owl/park fan Chad Henry. He was making his way through the park and saw some work taking place in the waterway besides the nest tree. A work crew from the City of St. Louis Forestry Division was there and from Chad's perspective, it looked like they were working on removing the portion of the branch that had been ripped off of the the nest tree and fallen in the waterway. Knowing and sharing my concern for both the fallen portion of the branch and the rest of the tree, he kindly dialed me immediately. Getting my voicemail, he left a message but later stopped by my office to clarify what he saw.

I then called Chris Gerli to ask him if he was aware of the work being done. While Chris hadn't been by that area yet and did not anticipate getting over there any time soon, he was curious and anxious about what might happen to the tree.

I made a call to a contact of mine on staff with Forest Park Forever. My contact had seen the tree crew by the tree earlier but did not know exactly what they were going to do. I asked him if he could:

c) If by any chance, could I have the portion of the hollow as a relic of this important site in the lives of Charles and Sarah and their offspring.

My contact was extremely gracious and stated he would do everything possible to safeguard the tree and that he would update me later that day. True to form he e-mailed me and let me know that:

c) he, my contact, would let me know as he learned more about the tree and its prospects.

This assuaged my fears about the immediate and long-term prospects for this tree and for that and more, I am very grateful to my contact and his colleagues! Many thanks also to Chad Henry and Chris Gerli for their assistance and leads during this episode!

Still, it was sad to hear that the remains of the hollow were no more and I wish I had taken more photos and videos of the fallen portion of the hollow. Sadder still was the initial damage to the hollow. This hollow has been an important site for the owls and it is such a unique hollow. When conducting an owl prowl I have always shown people this hollow, even when the owls have not been using it, it was that unique and special.

I am curious and optimistic about what happens in the future with this tree but I know that a key aspect of it and its interaction with the owls is over completely.
Posted by Mark at 1:09 PM No comments:

Friday, June 5, 2009
I was out of town for a few days during the middle of this week when a brief but intense thunderstorm rolled through the area on Tuesday. The following night I received a phone call from Edward Crim and he told me that the nest tree hollow was damaged in the storm! He said that the top portion of the branch containing the hollow (and many smaller sub-branches) had fallen into the waterway below! I was saddened to get this news but grateful for the heads up from Edward. Even though I was in the middle of a nice jaunt to Lake of the Ozarks where I saw some cool wildlife (Red-headed Woodpecker, many Turkey Vultures, two Eastern Chimpmunks and a Map Turtle-uncertain of the exact species), the news of the damaged hollow kept coming back to my mind. This hollow was the site of this year's nest and the nest in 2006. It is one of the key sites of the owls lives and history. One of the few items of consolation was that this damage did not occur when Sarah was on eggs or owlets were in residence.
After a longer than expected drive home, I needed some down time. Once I had dined and rested, I grabbed my gear and headed for the park. Even though I was prepared for it, the absence of so much of the hollow was startling. Here are a few shots: 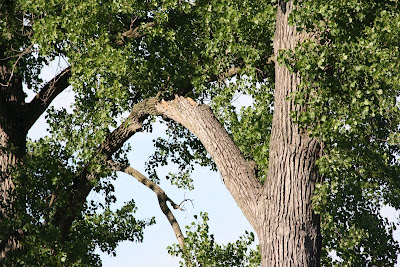 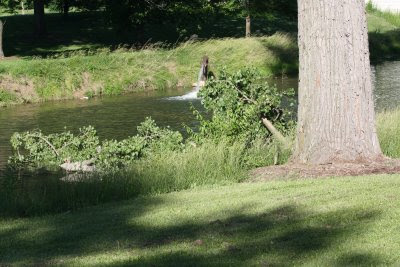 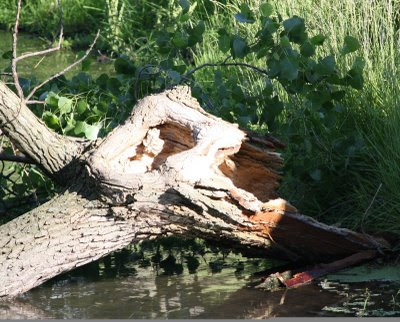 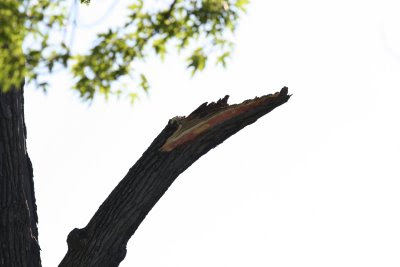 I will be sure to write more but I wanted to get this information out there. Thanks for reading!
Posted by Mark at 1:00 PM No comments:

Extra! Extra! Friend of The Owl Man Gets Great Press!

My friend, Edward Crim, just got a great write up in the new issue (June 2009) of Popular Photography (http://www.popphoto.com/) about his amazing photography project Forest Park 365, http://web.me.com/edwardcrim/FP365/FP365/FP365.html

It's a great article that does a superb job of describing him and his project. Edward is a superb photographer of animals, plants, people, architecture, landscape, you name it. His dedication to the park and to his project of photographing the park every day is beyond reproach.

Edward mentioned the owls and even made reference to me in the interview-thanks, Edward!
Posted by Mark at 1:06 PM No comments: