The second piece on the owls and my work with them on the radio program, Missouri Environment, on KBIA 91.3 Mid-Missouri Public in Columbia, Missouri aired this morning. This piece focused on an owl prowl itself.  The show's host and producer, Gary Grigsby, and KBIA did yet another great job and you can hear it here:

A great thrill and honor to have two superb stories done on this prowl.  Thank you, Gary and KBIA!

With Sarah nesting, Charles is doing all that he can to bring home the bacon.  On Saturday, January 10 he made two attempts on a Great Blue Heron in the space of about twenty-thirty minutes.  Predatory attempts are always amazing to see but attempts on this species is something else given that they are twice the size of the owls.  Watch the two attempts below:


He did not catch the heron on either attempt but there was no doubt that the heron was terrified and flying for its very life.

Sarah has been nesting for twenty-two days.  By now she has almost certainly laid all of her eggs after her ten-fourteen day pre-laying period of rest/preparation. She is well into the nesting routine of spending more than twenty-three hours a day on the nest with only a few breaks for stretching, grooming, eating and bodily functions.  I managed to film her, not especially well, flying out of the nest yesterday.  It is hard to do so because she does not linger at the hollow's opening and she comes out after sunset, the vast majority of the time.

You can hear Charles hooting as she comes out of the nest.  They had a great duet last night with her landing right next to him at one point.

On Saturday, January 17 I gave a talk for the staff and volunteers of Wild Bird Rehabilitation  on the owls' hunting and feeding behavior.  It was my first talk of 2015 and my second talk for this excellent organization that does great and important work.  The talk went well and I took some of these folks out for an owl prowl that night.  I explained to them how I find the owls using my interpretation of ESL, which translates to: Experience, Skill and Luck.  ESL was working well that night as I reacquired Charles out hunting at the edge of a prairie about a half mile (as the owl flies) from where he had been perched.

ESL was in good form the next night too as I was leading another owl prowl.  We had been watching Charles, who began to hoot regularly, when I suggested we head closer to the nest to look for Sarah emerging from it.  As we started down a hill I heard Charles hoot and then, just a second or two later, hoot again.  Knowing that a hoot from Charles quickly following another is often a sign that he sees Sarah, I turned around to see her alighting close to him.  Something made her change her spot quickly and we were treated with a close view of a powerful, graceful flight with her arching past us and heading to The Four Trees.

ESL continued as Charles was found over a half mile away that night.  Here are some pictures of Charles from last night. (Be sure to double click on each one to see a larger image) 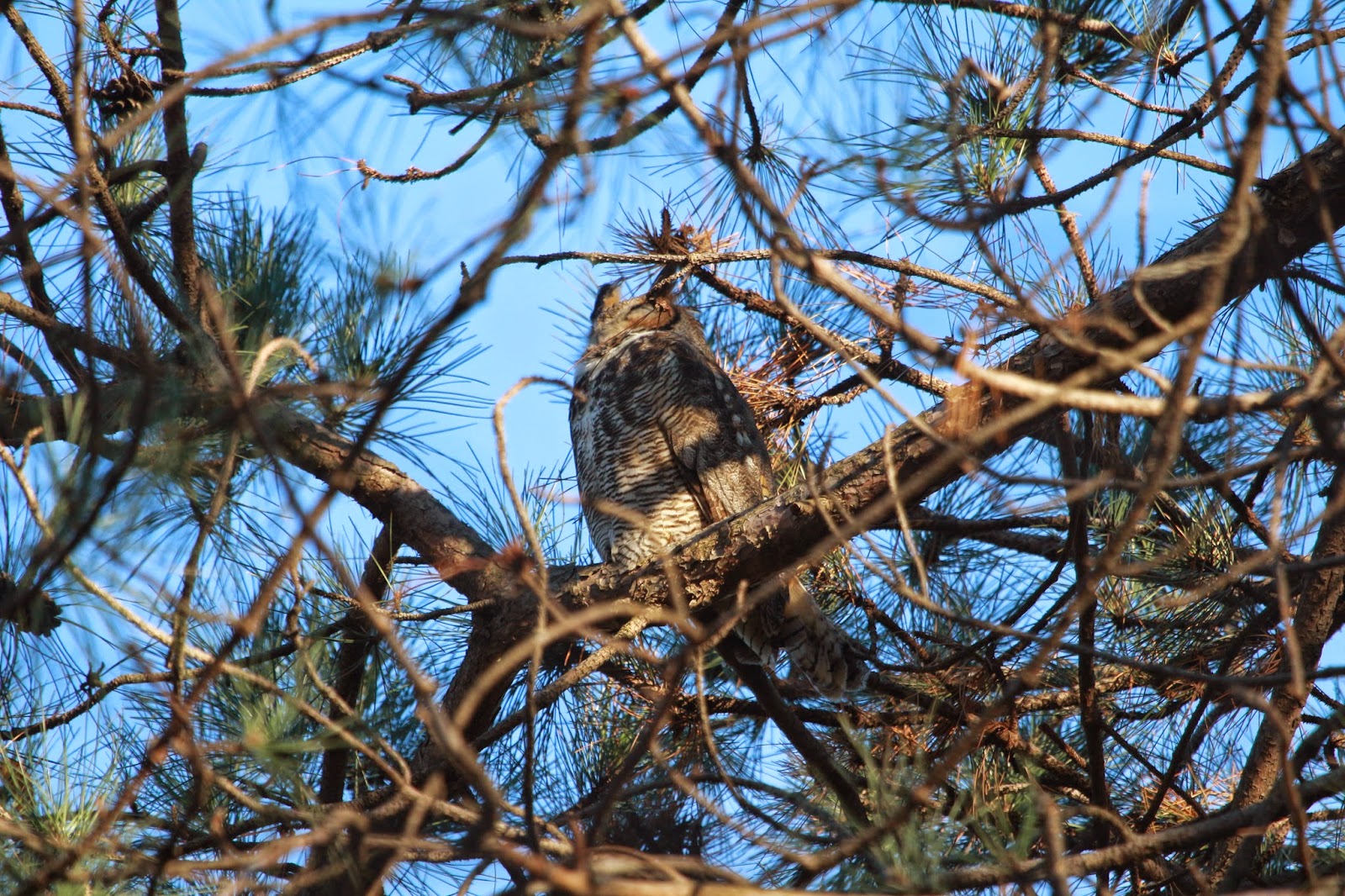 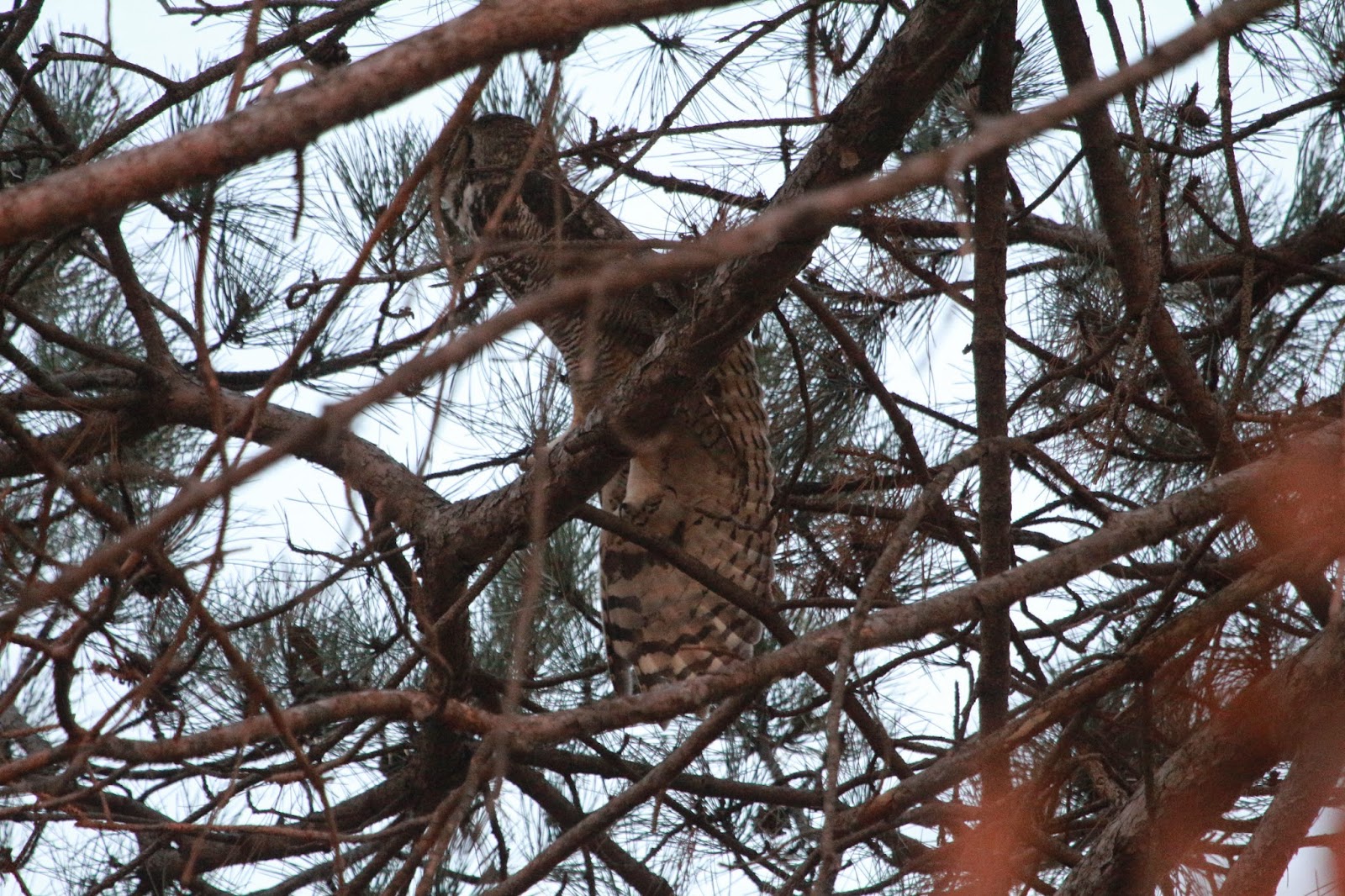 Doing a Fluff Up 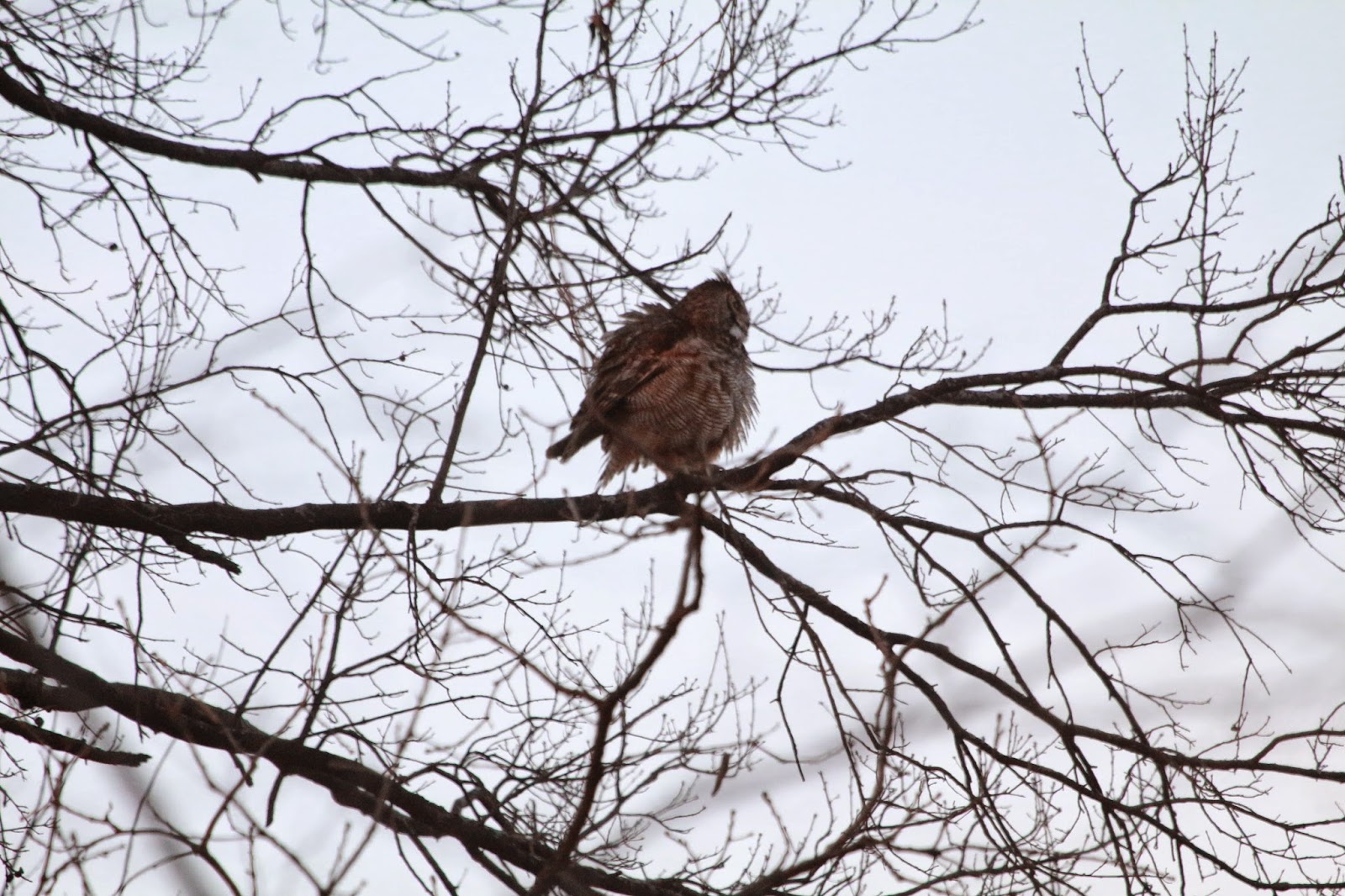 Owls On The Radio and Owlet Update

The first piece on the owls and my work with them on the radio program, Missouri Environment, on KBIA 91.3 Mid-Missouri Public in Columbia, Missouri aired this morning.  The show's host and producer, Gary Grigsby, and KBIA did a great job and you can hear it here:

It is a thrill and honor to have the owls and my work featured and shared in this way.  The second piece will air in two weeks on Tuesday, January 20.  I cannot wait!

Some readers have asked about the youngest owlet and I realized I forgot to include the latest about the youngest owlet in my last post.  The most recent night I saw the owlet was on Friday, December 26. No one has reported to me that they have seen or heard it since then either.  I hope the owl has dispersed safely and successfully.  Should it return I will be sure to let you all know.

In the meantime, Sarah continues to nest.  It has been a week since she started to nest. Here are two highlights with Charles from last night.  He perched in Charles' Xmas Tree and began his wake up process by ejecting a pellet and doing an Escalator Stretch:

Later on while he was in The First of Three Trees, a Great Blue Heron flew passed. It circled back towards The 06/09/11/13/14/15 Nest Tree and Charles went for it. Listen at the 24 second mark for the croaking distress calls of this massive bird as it evades Charles.

This was possibly the second attack made by Charles last night on a bird of this species. Earlier I heard similar distress calls by a Great Blue Heron and turned to see Charles pulling up to land in a tree near the heron. Amazing to see the owls go after a bird twice its size!

Thank you for reading and listening!
Posted by Mark at 10:11 AM No comments:

It is amazing that Sarah is nesting again in this hollow and nesting again, period. This is the tenth consecutive nesting by Sarah of which I know.  In re-reading some of the literature today, it was again striking to read that many Great Horned Owls do not nest every year. This fact is in marked contrast with the amazing consistency of Sarah and Charles. This consistency speaks highly of their fitness, both as individuals and as a mated pair. 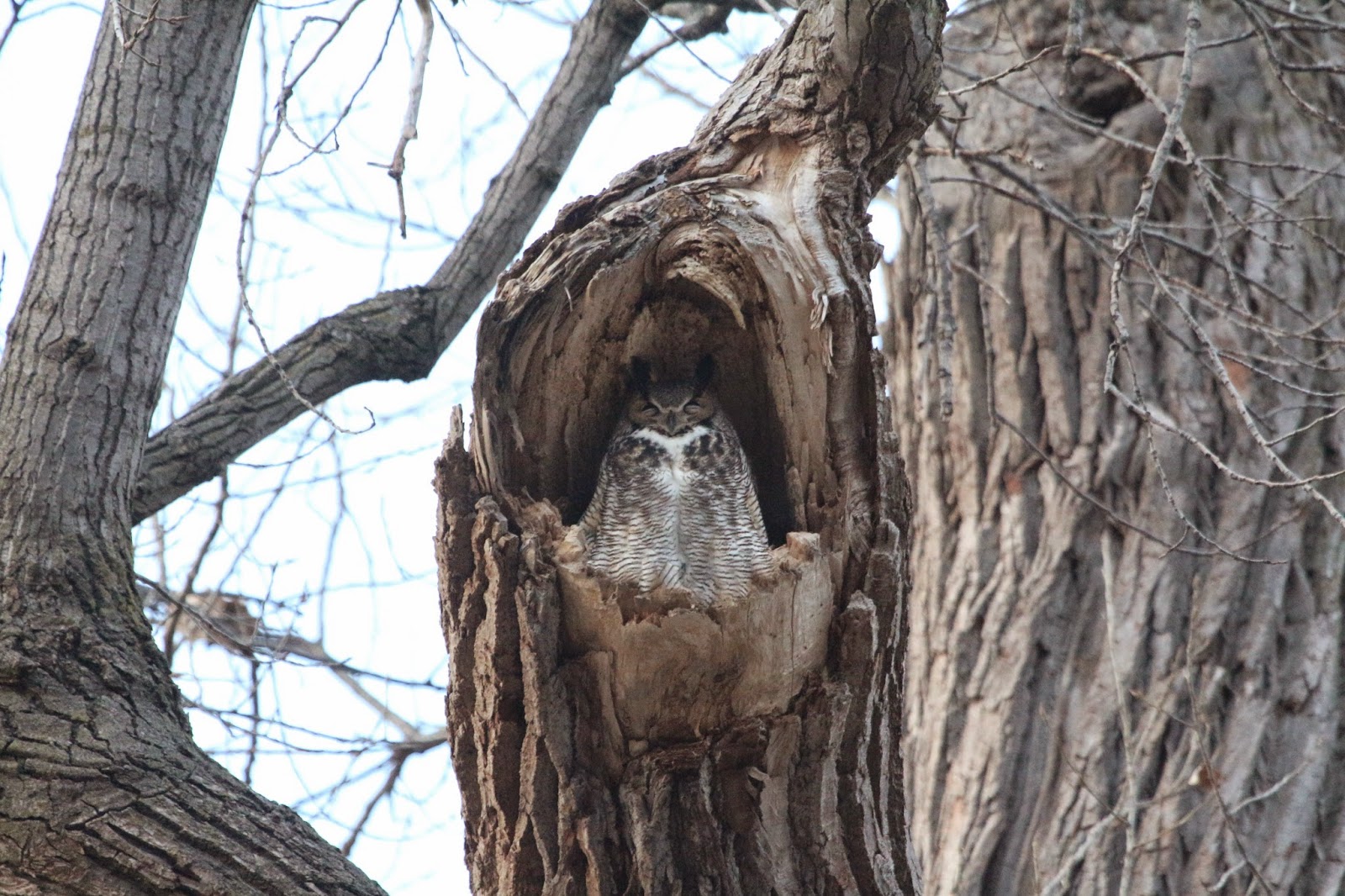 Here is Sarah flying out of the hollow tonight, which she did especially early. More to say about that but time is limited. Gorgeous owl, gorgeous flight.

Since Sarah has begun to nest, there have been many highlights of note. One was last night when she followed Charles out east/southeast and they mated in an area of great importance to and of much work by my cohorts in the Great Rivers Chapter of the Missouri Master Naturalist Program.

Another recent highlight was seeing Sarah from the waterway drink on Friday, January 2.  Sarah has regularly drunk early in her nesting period.  It is likely that the forming eggs require additional liquid input beyond the owls usual supply of liquid that comes from their prey.  You can read about Sarah quaffing previously here, here, and here.  Here is Sarah drinking on Friday.  Note the care and caution with which she drinks.

The commencement of Sarah nesting and the time just before and after were not observed and documented by me.  I was happily ensconced in New Hampshire at the home of my brother, Peter, and his family for several days with 19 of the 24 members of my large immediate family.  Living in four states and two countries it is hard to get many of us together but we did so this year, our biggest gathering since 2010 and 2005.  My friend and owl mentee, Brenda Hente, did yeoman's work keeping an eye, two actually, on the owls and documenting their doings AND keeping me appraised. Huge thank yous to her and an appropriate thank you gift is on its way.

The new year also happily brings along new media coverage on the owls an my work with them. This coverage will be on the public radio station of Columbia, Missouri, KBIA 91.3 FM as part of a bi-weekly program called Missouri Environment produced by Gary Grigsby.  In addition to producing this program, Gary is an Associate Professor at the University of Missouri, Columbia.  I first heard from Gary a few years back and we have been in touch since then.  He came out in September 2014 on an owl prowl I led for the 2014 St. Louis Bioblitz a project of the Academy of Science - St. Louis. Happily, Gary enjoyed the prowl immensely. I was quite chuffed when he told that he was so taken by the owls and my work with them that the one story he planned would now be two stories.

The first story airs this Tuesday, January 6th at 7:04am CST.  It will be on the station's main page at
that day and anytime on the page for the show Missouri Environment.   The second story will be two weeks later on Tuesday January 20th at 7:04am and on the same links as above.  If you want to hear the story live on the air you can at some distance.  According to KBIA's FAQ:

"KBIA has a repeater station, KKTR, at 89.7 FM, broadcasting from the campus of Truman State University in Kirksville, Missouri, and covering all of Kirksville and most of Adair County. The KBIA 91.3 FM signal broadcasts from the KOMU-TV tower, located six miles south of Columbia. The primary signal radius of KBIA is about 60 miles; KBIA's digital-only side channels are available in a somewhat more concentrated area. All three KBIA channels are available worldwide in live streaming audio."

Thank you to Gary for his interest, dedication and enthusiasm. I cannot wait to hear the stories and I hope you feel the same!

Last but not least, while I was in New Hampshire, I reached my ninth owliversary.  I began to see the owls consistently on December 29, 2005.  Every time that this date rolls around is a time of much reflection and gratitude. I never imagined that I would get to know any owls. never mind this amazing pair in as much depth as I have. Their impact on my life is beyond estimation and I am overjoyed and ever-amazed how they impact the lives of others.

I have not had time to do my usual data crunching that I do when I reach an owliversary but I am confident that I maintained my average of watching Charles, Sarah and their offspring 260-300 nights a year.  Outreach efforts continued to grow and flourish with 40 talks given and 68 owl prowls led in 2014 up from 28 and 57, respectively in 2013. I gave my first talks in Illinois, three in all, and my first in Kansas City. Many talks, both in and out of town, were for new institutions and ones that kindly had me back for subsequent presentations. I have over 10 talks booked for 2015 and including ones in Edwardsville, Carbondale and Springfield, Illinois and in Union and Neosha, Missouri.  If you work with a organization that would like to host one of my talks, please contact me at: mglenshaw@gmail.com

Thank you for reading and Happy New Year!
Posted by Mark at 9:10 PM 2 comments: