The owlets continue to grow in their abilities and they are close to full-grown physically. One of the amazing paradoxes of Great Horned Owls is how fast the owlets grow physically and how slow they take to mature and become independent in every other sense. When leading prowls or otherwise discussing the owls, I often tell people that the owlets, physically, are on par with a seventeen year-old human. In all other senses they are on par with a human toddler. That said, it is thrilling to see their gradual development. Every flight, landing, predatory gesture (to call them attempts at this stage is not quite accurate) is a building block to their independence. This year's owlets, Dalton and Monica, are flying (and landing) better than their previous siblings that I have seen at this age and stage. In recent weeks they have made significant progress towards their full maturation but that's a topic for a future post.

Let's take a little trip back to March 31 to see them being fed by Sarah. On this day I arrived and found the owlets, Sarah and Charles, in that order, pretty quickly. It was a lightly overcast day but I had arrived well before sunset. As I watched Sarah and the owlets from one side of The Wooded Area, Sarah suddenly flew off towards The Middle Conifers on the opposite side of The Wooded Area. I walked around quickly but quietly hoping to find Sarah. I got to the Middle Conifers but I could not find her anywhere in the vicinity. I finally turned around to look at the owlets and there was Sarah in The Big Dead Tree with prey in her talons! In the time it had taken me to walk the roughly 100 yards around to the Middle Conifers, she had caught something and flown back to The Wooded Area. She had already begun to dine. 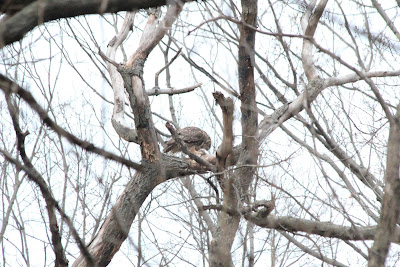 I knew that if I went back to my original vantage point that I would have a great view of her eating on her own and then feeding the owlets. Not for the first time or the last, I wish I could teleport so that I could get there faster. I hurried back around and was amazed by what I saw. She had caught an Eastern Cottontail Rabbit and within moments, the owlets came over to be fed by her. Since it was still quite some time prior to sunset I was able to use the available light and get some dramatic photos and video. You can double-click on each photo to get a bigger image. The footage might be overly graphic for some people but this is the day-to-day reality of life and death in nature. 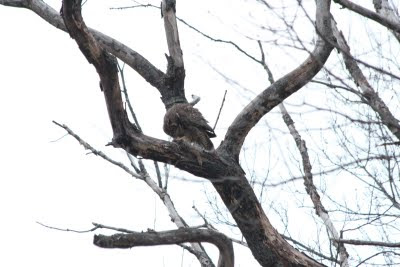 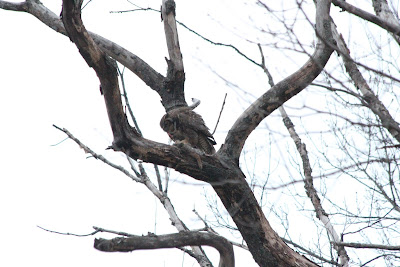 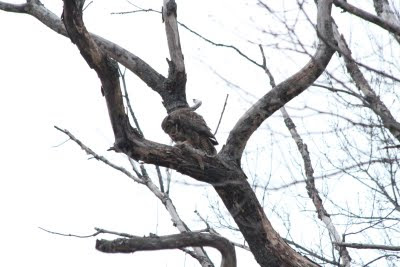 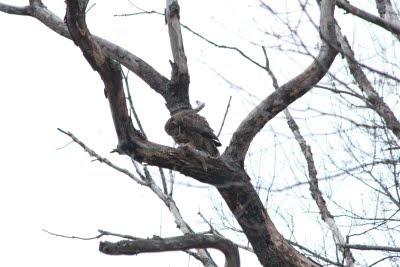 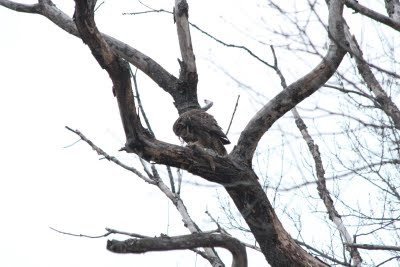 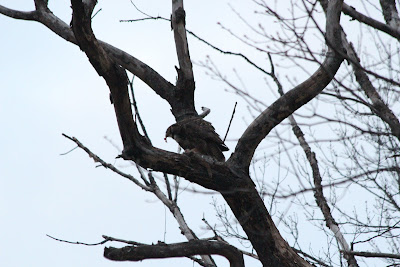 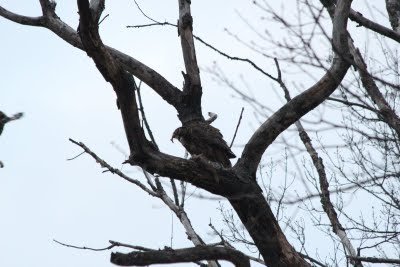 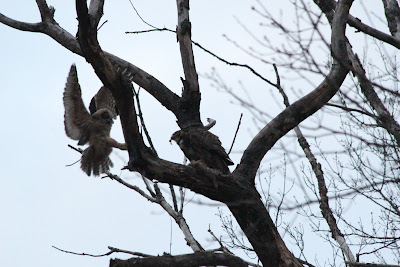 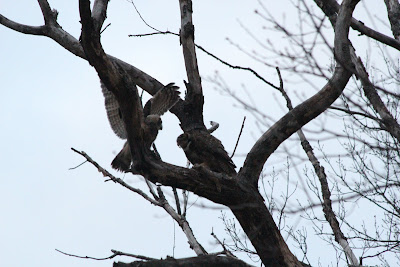 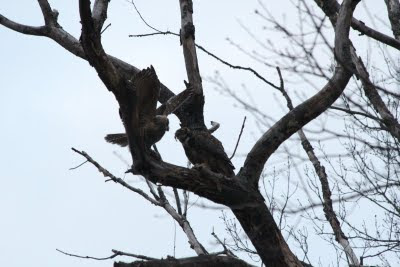 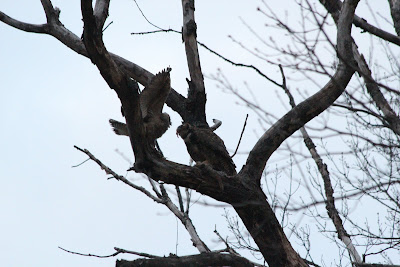 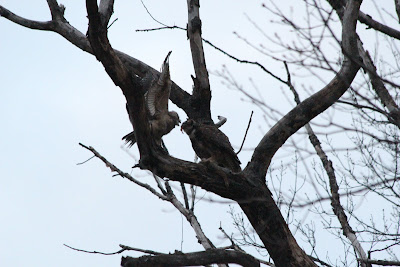 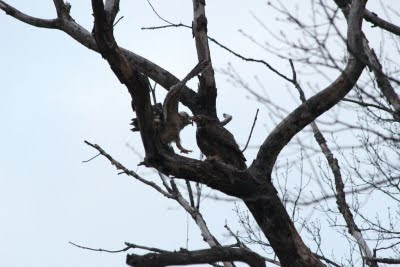 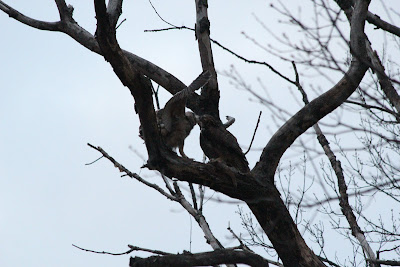 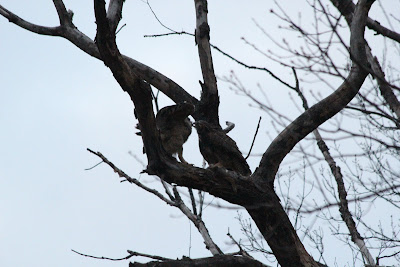 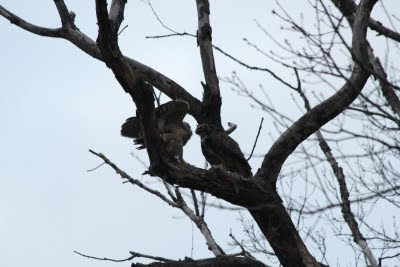 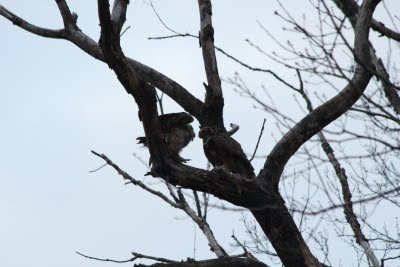 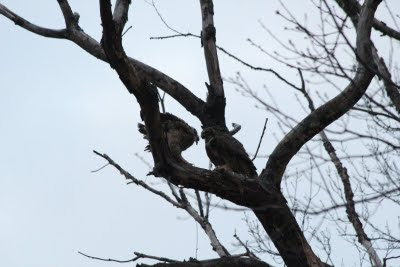 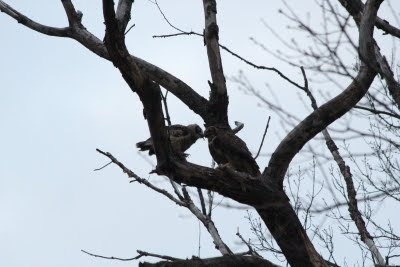 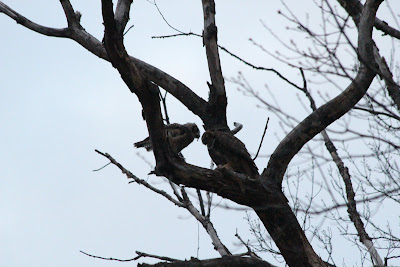 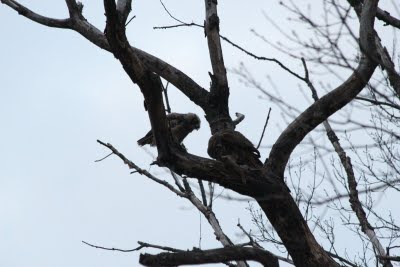 Now for some video:


Now that you have looked at the photos and video, let's go back and check out a few key points. Notice how when Sarah feeds the owlet, she keeps her eyes closed. She does this to protect her eyes from the owlet's sharp bill and less than precise movements. Sarah's feeding technique is fascinating as she holds down the rabbit with her massive and powerful talons and tears the prey with her bill. The fact that Sarah caught the rabbit so early underscores the Great Horned Owl's deserved reputation as an opportunistic hunter.

Sarah continued to feed the owlets for a while before flying off with the last leg of the rabbit. And there's more to tell about that...