Upcoming Talk On The Owls

I’m excited about this post. A few months ago I received a great honor. I was asked to give the keynote note address at the annual awards dinner for the St. Louis Audubon Society. I eagerly accepted and now the announcement has been made in the March issue of the Society’s newsletter, Tail Feathers. The dinner is on Saturday, April 14. All of the details and registration information can be seen here as well as a picture of Sarah taken by your humble speaker. Registration ends on April 1, so register soon and avoid becoming an April fool. I hope to see as many owl friends, old and new, as possible at this august occasion.

This will be the second time I have given a talk for St. Louis Audubon Society. The first talk was held in January 2011 at the Dennis & Judith Jones Visitor and Education Center in Forest Park. The audience of around eighty people was a keen and supportive group and the talk went splendidly.

Like my first talk I will talk about Great Horned Owls both in general and Charles and Sarah in particular. I will again show pictures and videos to illustrate some of the different behaviors I have seen. The talk will differ slightly as I will conclude with a bit of a call to arms. One thing that my work with the owls and the sharing thereof continuously demonstrates to me is that people want to connect more with nature. It is up those knowledgeable about nature, be they birders, naturalists, gardeners, to help other people connect more with with nature. I will offer methods, suggestions and advice on how to help people achieve this greater connection with the natural world.

Thank you to Jim Wilson, Chris Ferree, David Rogles, Mitch Leachman and everyone in St. Louis Audubon for their gracious invitation and support. I will do my utmost to deliver a compelling and educational talk. At the very least it will be an opportunity for me to prove that I do not always wear outdoor clothes, carry a backpack and have cameras and binoculars hanging from my neck. As a tease/incentive to attend the talk, below you will find two pictures that I will likely use for my talk. Be sure to double click on them to see a larger image. Thank you for reading and I look forward to seeing you on April 14! 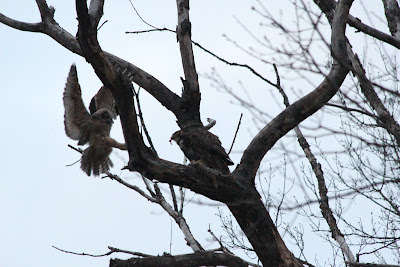 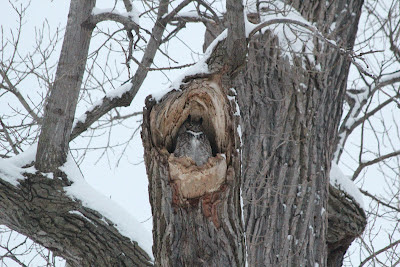 After watching for further signs of three owlets for over a week I made the call that there are two owlets this year. These two owlets are the fourteenth and fifteenth owlets that I have seen Charles and Sarah have in the over six years and seven breeding seasons I have been privileged to have seen.

As in recent years when the owlets have numbered two, I have picked names belonging to recently deceased beings as an in memoriam tribute and homage. The older, larger owlet further distinguished at this point by its larger facial disc is named Christopher after the late writer Christopher Hitchens. Christopher Hitchens died at the age of 62 on December 15, 2011. An elegant, penetrating, erudite and prolific writer on a vast array of topics. These qualities combined with his strongly voiced and often iconoclastic opinions made him many admirers and detractors. I certainly disagree with many of his conclusions and opinions but I admire many of them as well as his conviction and candor.

I had not thought of naming an owlet after him until I was reading his memoir Hitch-22: A Memoir in January. On pages 333-335 he submits himself to "The Proust Questionnaire" to offer some insights on himself. When asked what his favorite bird is his response of "The owl" elicited a stunning but pleasant "Eureka" moment from me. Sarah was already nesting. I thought that, depending on the number of owlets she and Charles had, I would name of of them Christopher.

The younger, smaller owlet currently with the smaller facial disk is named Velvet after my mom's late female black Labrador retriever mix. After nineteen years of loyal companionship and a tough last few months of life, Velvet was put down on October 14, 2011. It was the best decision for her but it was still a tough one and a sad day for my mom and the rest of my family. My girlfriend Wendy had the great idea to name one of the owlets Velvet as a way to remember Velvet the sweet, soft-furred dog and to connect the name with the velvety softness of owl feathers. I asked my mom her thoughts and for her blessing on the idea and my mom gave it an enthusiastic green light. Thanks, Wendy and Mom!

Now for some pictures of these beauties with and without Sarah. Be sure to double-click on the to see a bigger image.

On February 20, 2012 from left to right: Velvet, Christopher and Sarah. 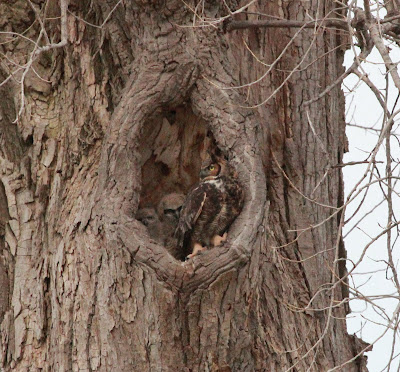 On February 21, Velvet on left, Christopher on right, Sarah swooping out of the nest. 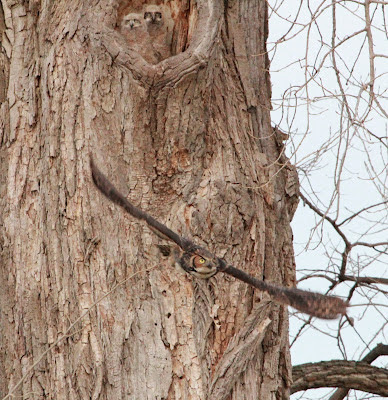 With Sarah out of the nest the owlets have more room to move. Yawning, head bobbing and first feather grooming that I have seen this year.

On February 25 with Sarah in the background Christopher yawns while Velvet does an Escalator Stretch (the stretching of a wing and leg on the same side of the body). 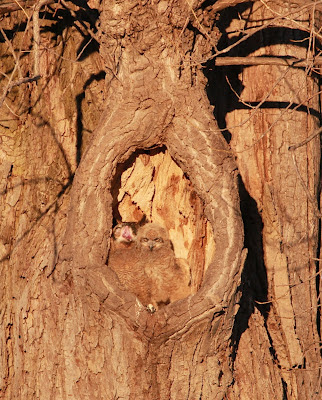 To conclude on February 29, Sarah is again in the background but Velvet is now on the left and Christopher on the right. It's amazing how fast they grow. Thanks for reading! 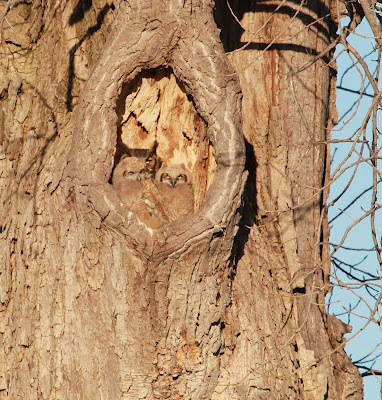