After many days of seeing hints that hatching occurred (Sarah sitting higher in the hollow by the day and looking down within the hollow), tonight we saw two owlets!

After a day whose beginning was certainly "a case of the Mondays", arriving at the park was especially welcome. Sarah was even higher in the nest than Sunday but despite looking from several different angles and altitudes no owlets were visible. Charles was in his favorite conifer; one of the the three perch spots he has employed the most this nesting season.

I soon ran into several owl friends, new and old, including Kim and Anna Rois, Terry Bond and my great owl friends and mentees, Brenda Hente, Barb Brownell and Chris Gerli. Today marks a special day for Brenda: it is the one year anniversary of the first time she came to Forest Park for an owl prowl to see Charles and Sarah. Adapting from my term "owliversary", Brenda has dubbed this day her "prowliversary."

Charles began to hoot and we all watched Sarah carefully. Barb and Chris departed to check on another pair of GHOs that they have been focusing on now for several weeks and others of us have checked out regularly.

Sarah emerged from the nest and flew to The Fleur de lis Tree. All attention went to the nest and we soon saw a small, young owlet's white/grey downy body rising up above the bottom lip of the hollow. Watch at about the 5-6 second mark:

Amazing! Here's the first still I snapped. Be sure to double click on it to see a larger image. 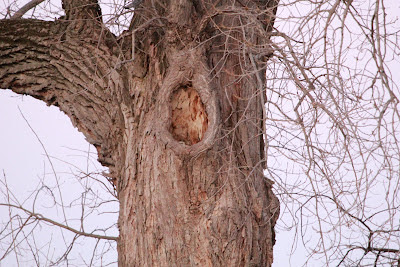 Sweet! It's an owlet at least week old and maybe as much as three weeks old. Sarah started nesting on December 17. The average incubation period for Great Horned Owls is 33 days. In addition, Sarah seems to have a one-two week period before she lays the eggs when she is in the nest and settling down to nesting while building up to it simultaneously.

We kept looking and we all saw a second owlet. Unfortunately, I did not get a good photo/video evidence of the second owlet tonight. But here is some more video of the first owlet:

Sarah returned to the nest and I got a shot of her at the nest with the owlet looking up at her. 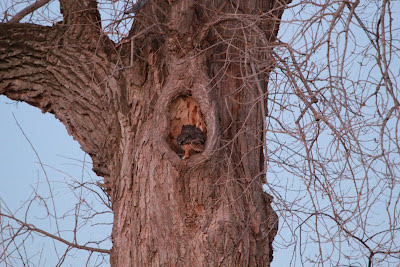 Charles went flying off east and I reacquired him. 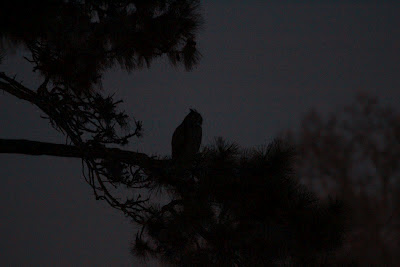 He moved to a softball backstop and I was able to get some pictures of him with a St. Louis landmark and my favorite building in town, in the background. 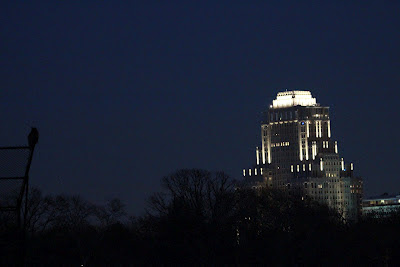 He eventually flew off east and I headed for home. What a night!

Thanks for reading!
Posted by Mark at 8:12 PM 6 comments: