Today I had the honor and pleasure of returning to the radio program St. Louis on the Air on KWMU, St. Louis Public Radio 90.7FM to discuss the owls and my work with them.  As with my first appearance in December 2013, I was warmly welcomed by the show's producers, staff and host; Don Marsh.  Don did another great job of guiding the discussion with excellent questions both from himself and from phone calls, tweets and e-mails.  I had a great time and I hope I can return again. Thank you St. Louis on the Air and KWMU!  You can listen to today's show here:
http://news.stlpublicradio.org/post/meet-angelina-jolie-and-brad-pitt-birds-forest-park


Just three nights ago, I had the great fortune to see Sarah uncache some prey, most likely from The Middle Conifers, and feed the owlets before sunset.  I shot many pictures and videos of the feeding. Together the pictures and the videos tell the story of the feeding.  For now here are the videos in the order in which I shot them.  You can see how hungry the owlets are and how carefully Sarah feeds them. Also lots of The Fluff!

Thank you for reading, listening and watching!

Sorry for the lack of updates!  I have been traveling a fair amount in recent weeks and when not traveling, spending time with, on and for the owls. So let us catch up now!

The second owlet fledged between Thursday, April 2 and Friday, April 3.  This was just one day shy of a week after the first owlet fledged.  I was out of town during these and other days but was kept up to speed via text and e-mail by my friends and owl mentees, Brenda Hente and Rusty Wandell. Aaron Hampton, a biologist/ecologist/science teacher/wildlife photographer, found the now second fledgling early in the morning of Friday, April 3.  You can see his photos of the then nestlings and the nowfledglings on his website.   Many thanks to Brenda, Rusty and Aaron for their massive and most appreciated observation and documentation!

The owlets are close to each other in age and challenging to tell apart.  It is beautiful to see them and like their siblings before, they often perch close together. Here they are from Saturday, April 11. Much of The Fluff visible! 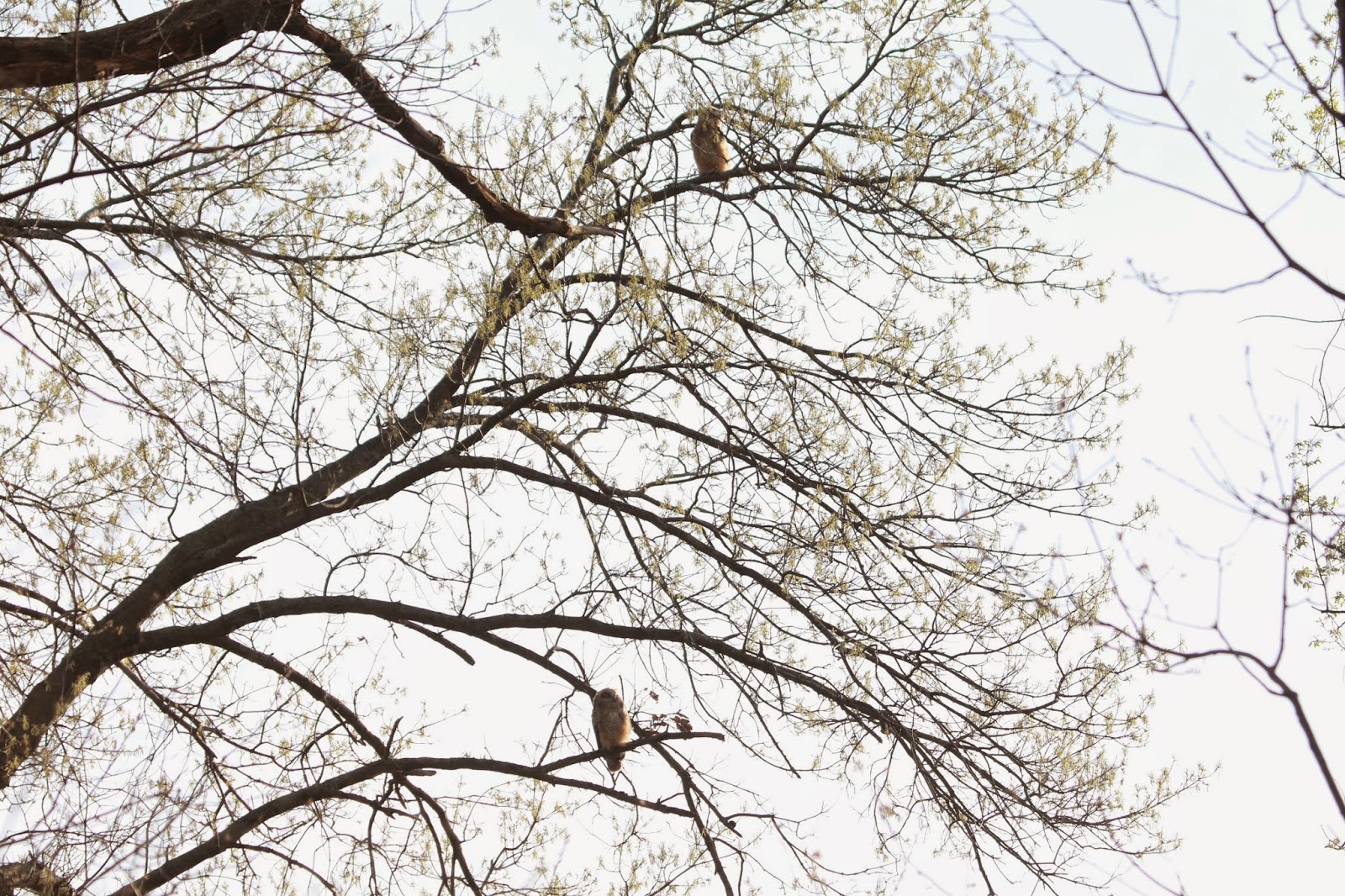 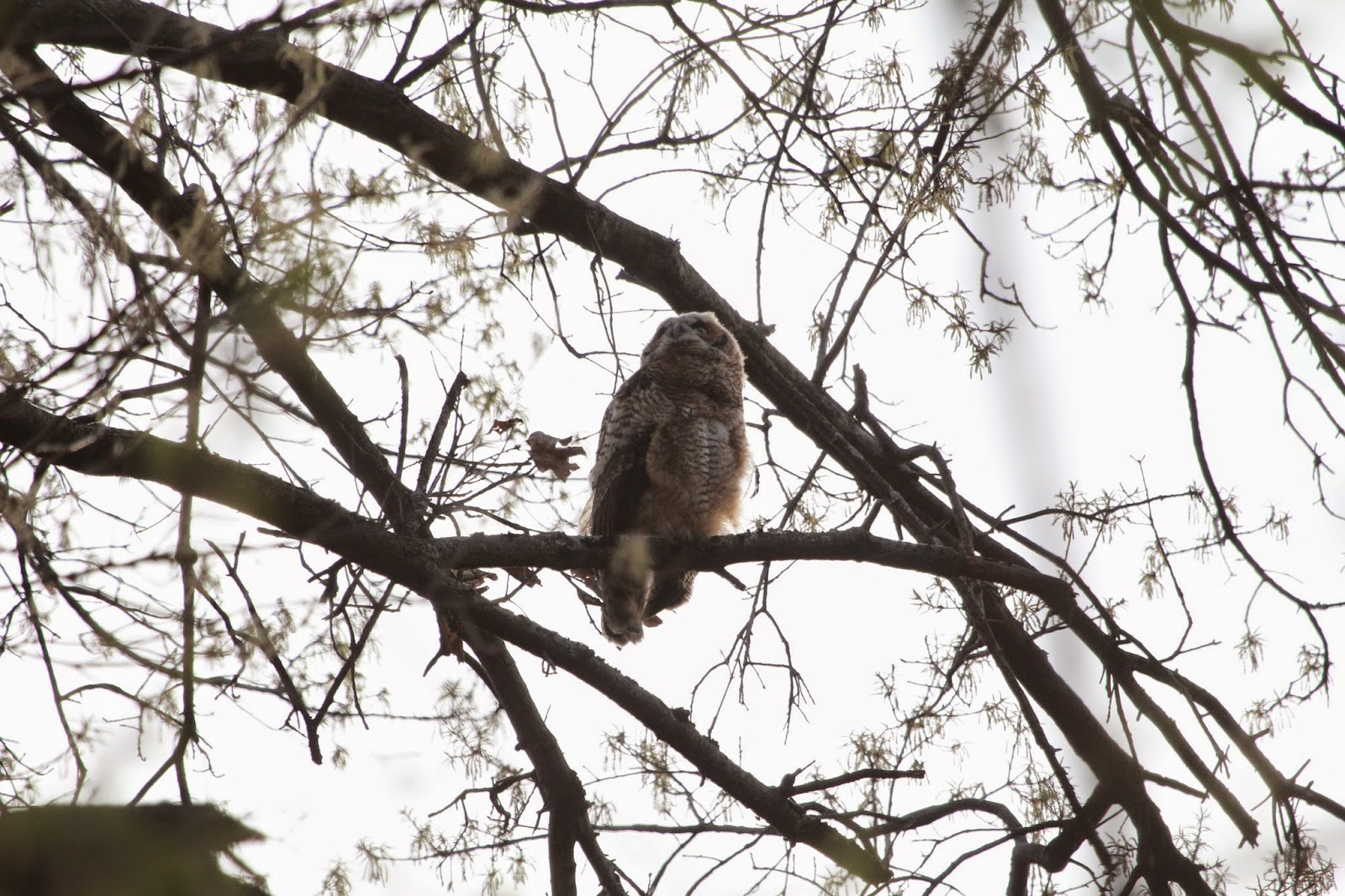 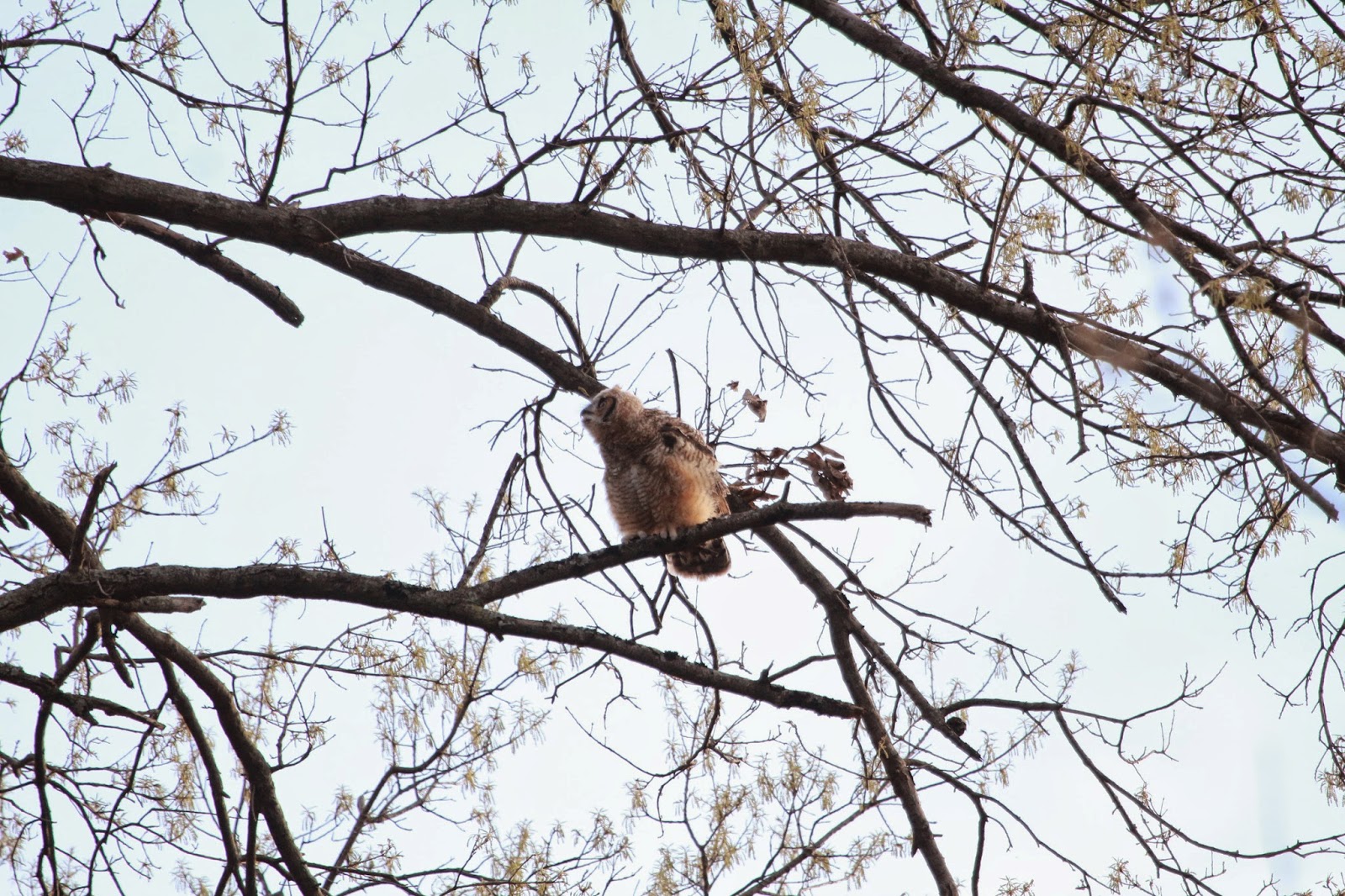 Names for the owlets are forthcoming and will be announced soon.  Thank you for your patience!

I am thrilled and honored to be returning to radio program "St. Louis on the Air" on St. Louis Public Radio on KWMU 90.7 FM.  I'll be on the show this Thursday, April 16 and the program begins at 12noon CST and runs for an hour. As of now, I do not know if I will be on the 12:00pm segment or the 12:30 one.  You can listen live both on the radio in the St. Louis area and online anywhere you have an Internet connection via the station's website. I was first on this excellent show on December 30, 2013 . It went well for all involved and generated much interest in the owls and my work with them.  I am beyond grateful for the invitation to return! I hope you can all listen in on Thursday!

Despite the closeness in age and size between the owlets, some behavioral differences remain.  The older owlet is more adept at flying and landing.  This was highlighted on Tuesday, April 7.  Sarah disappeared on me as sunset approached. I did not know where she went but I thought it was likely that she went to un-cache some prey.  A few minutes later she confirmed my deduction as she reappeared with the headless remains of an Eastern Cottontail Rabbit; a perennial favorite prey item.  The older owlet quickly flew to her and Sarah began to feed the owlet. 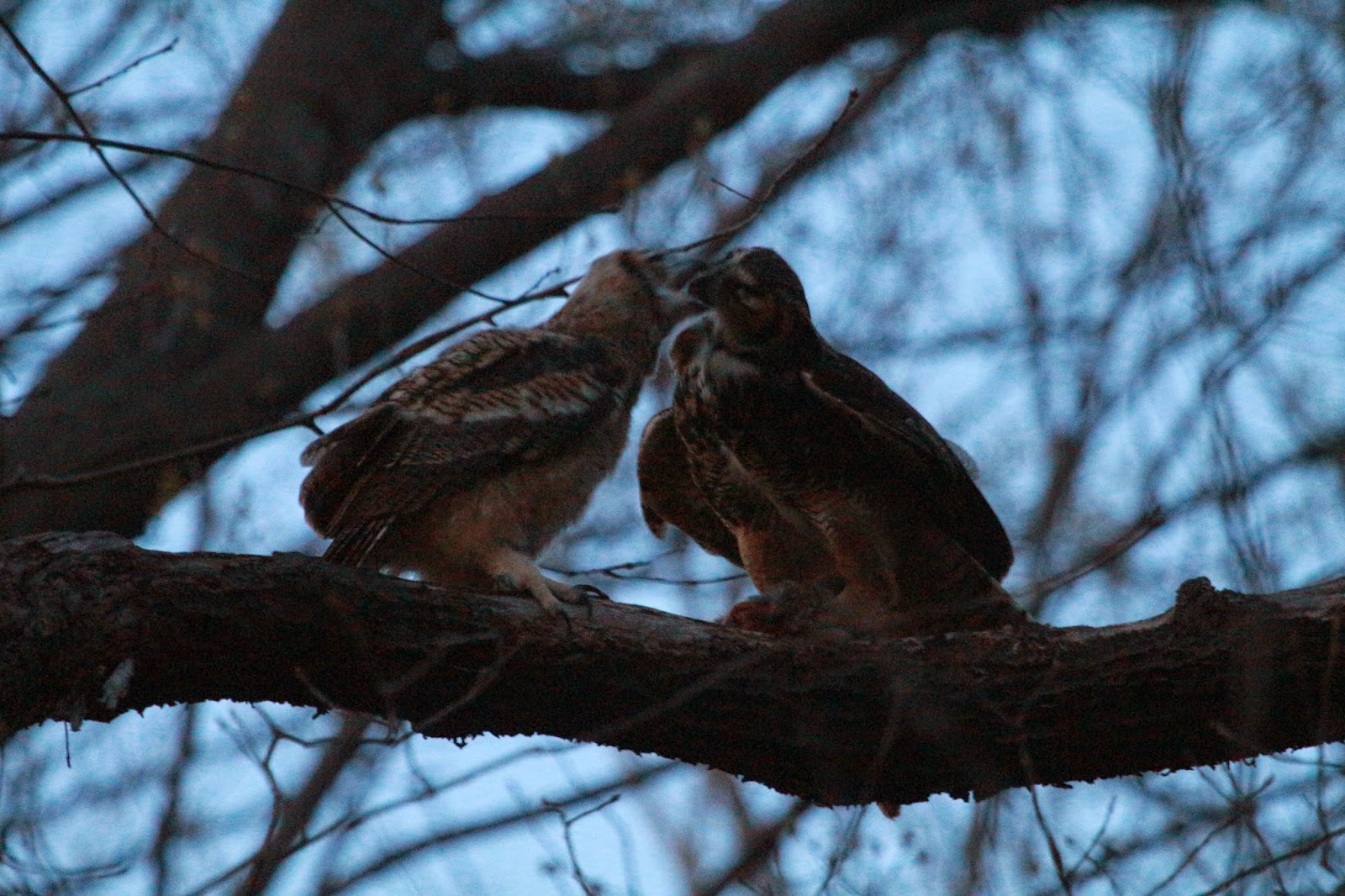 The younger owlet moved closer but still had thirty-forty feet to fly to get to Sarah and the prey. This owlet watched with literally hungry eyes and rasping begging cheeps. 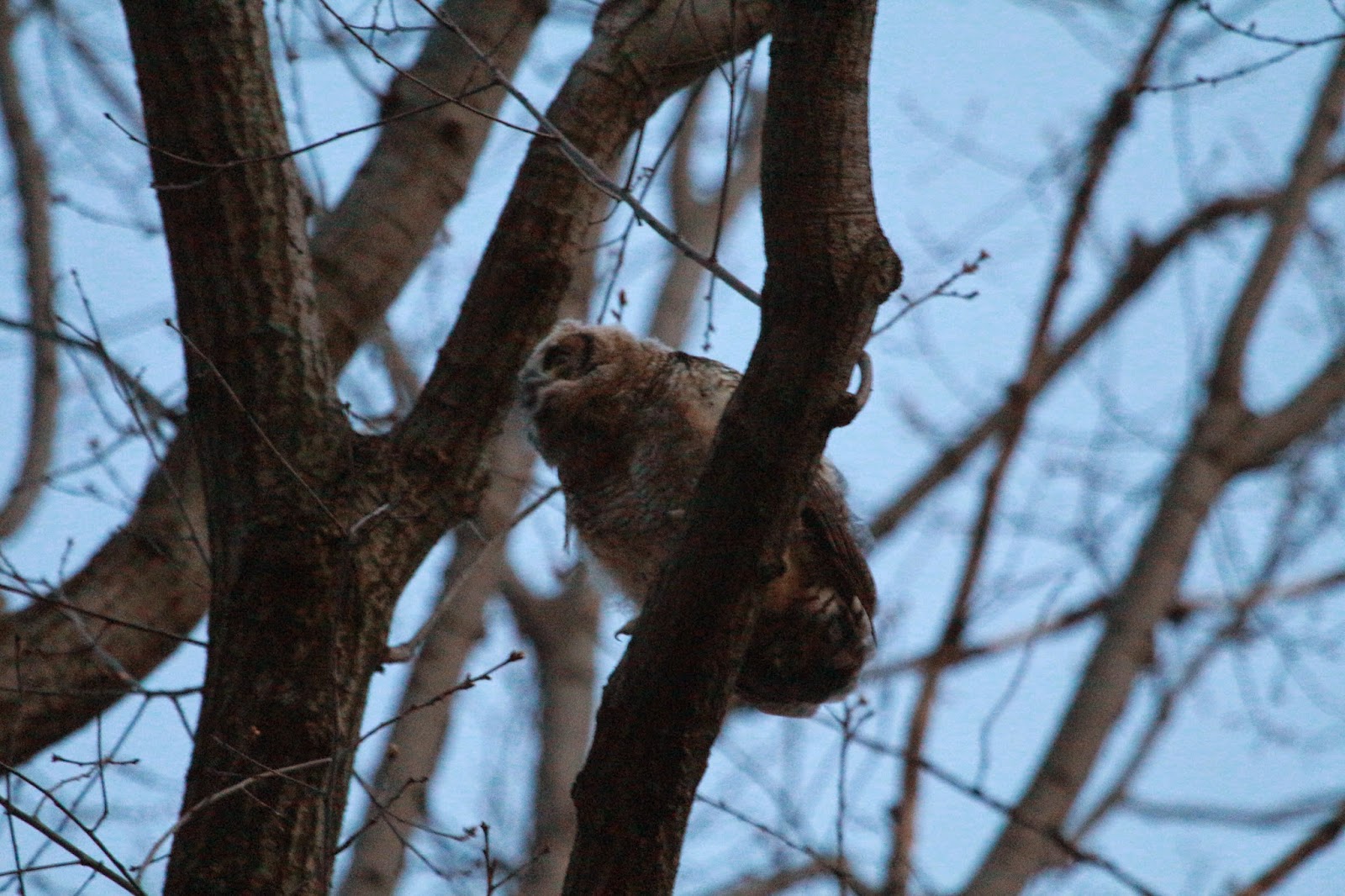 After several minutes, it flew over and landed on the same branch as Sarah and the still-feeding older owlet.  The younger owlet was still some distance from mom and meal and it begged non-stop.  As you will see below, Sarah pivoted the prey away from the older owlet making it accessible to the younger owlet who maked his/her way over to Sarah and feeding occured!

Words like joy, honor, privilege and delight barely begin to describe what it is like to observe moments like this.  As I often say, there are so many aspects of the owls' lives and behavior that never get old.