Where Is Charles While Sarah Nests?

Sarah continues to nest as she has for just shy of eight weeks.  We have had some indications that hatching has occurred: Charles bringing prey directly to the nest one night and then this past Sunday, Sarah returned to the nest with prey.  Like 2011, given the height and lack of visibility into the nest, if all has gone well and owlets have hatched, we will not be able to see the owlets until they are a few weeks old.  I  have to keep reminding myself to be patient!

As in years past Sarah continues to be a paragon of parenthood; spending over twenty-three hours a day on the nest.  She takes only brief breaks to stretch and attend to her toilet. Some breaks are longer than others.  Last night she was out of the nest for over forty minutes even though temps were in the low-twenties with the wind chill in the teens, a fact I can attest to having spent two-plus hours in said temps! It seemed odd for her to be out so long on such a cold night but when I begin to question the rightness of the owls' behavior, I try to remind myself that they know more about being a Great Horned Owl than I ever will.

So what is Charles doing?  I always reassure people that while Sarah is dedication owlsonifed, Charles is no slouch himself.  He stays active feeding Sarah and himself and as owlets hatch, his hunting duty doubles down in volume and urgency.  Before he heads out to hunt he perches and rests during the day.  He has favored a couple of spots while simultaneously mixing it up a decent amount.  During the main part of the day he is often in the nest hollow itself. Here are a few shots of him from February 2.  Be sure to double click on the photo to see a larger version. 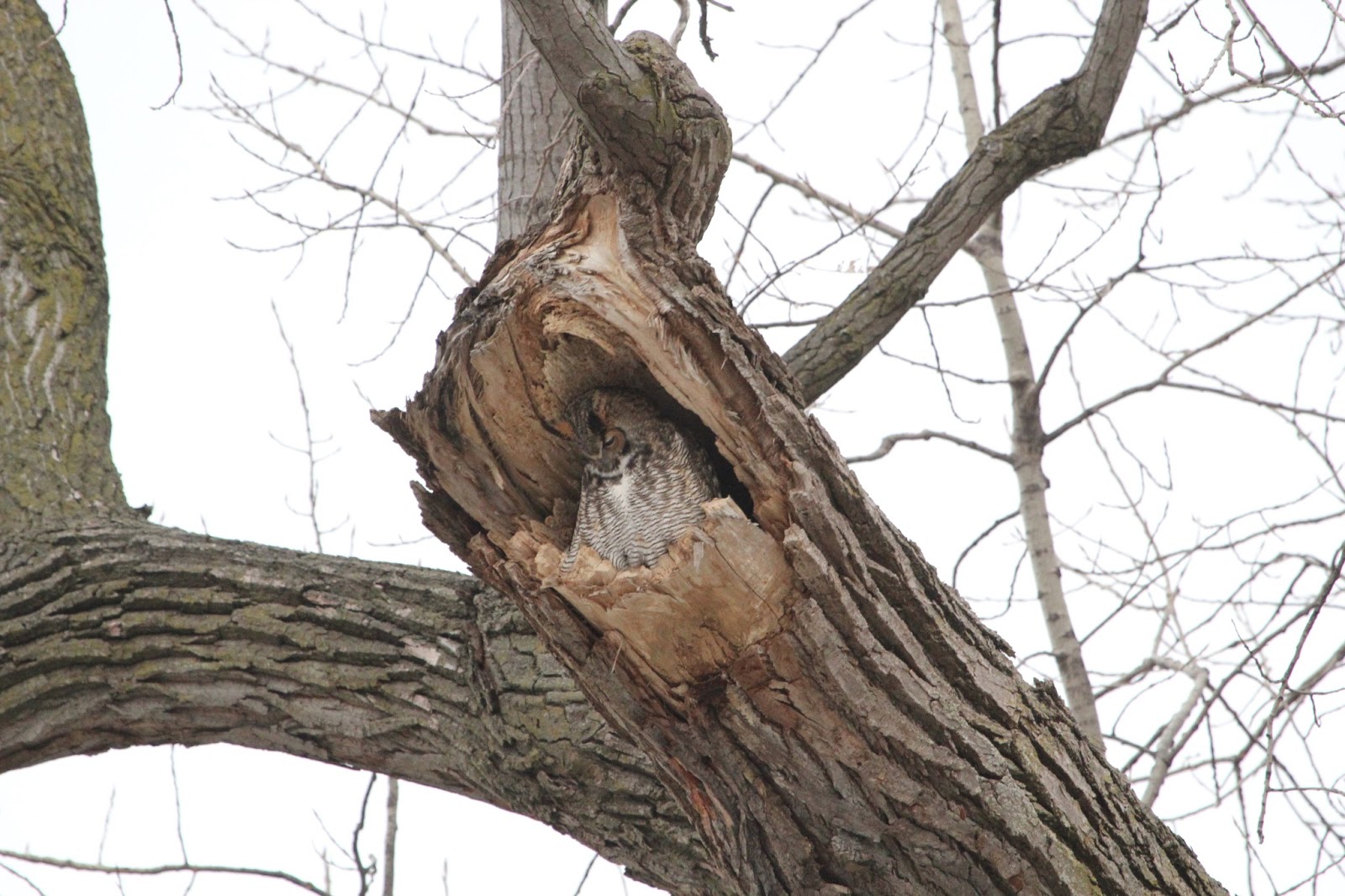 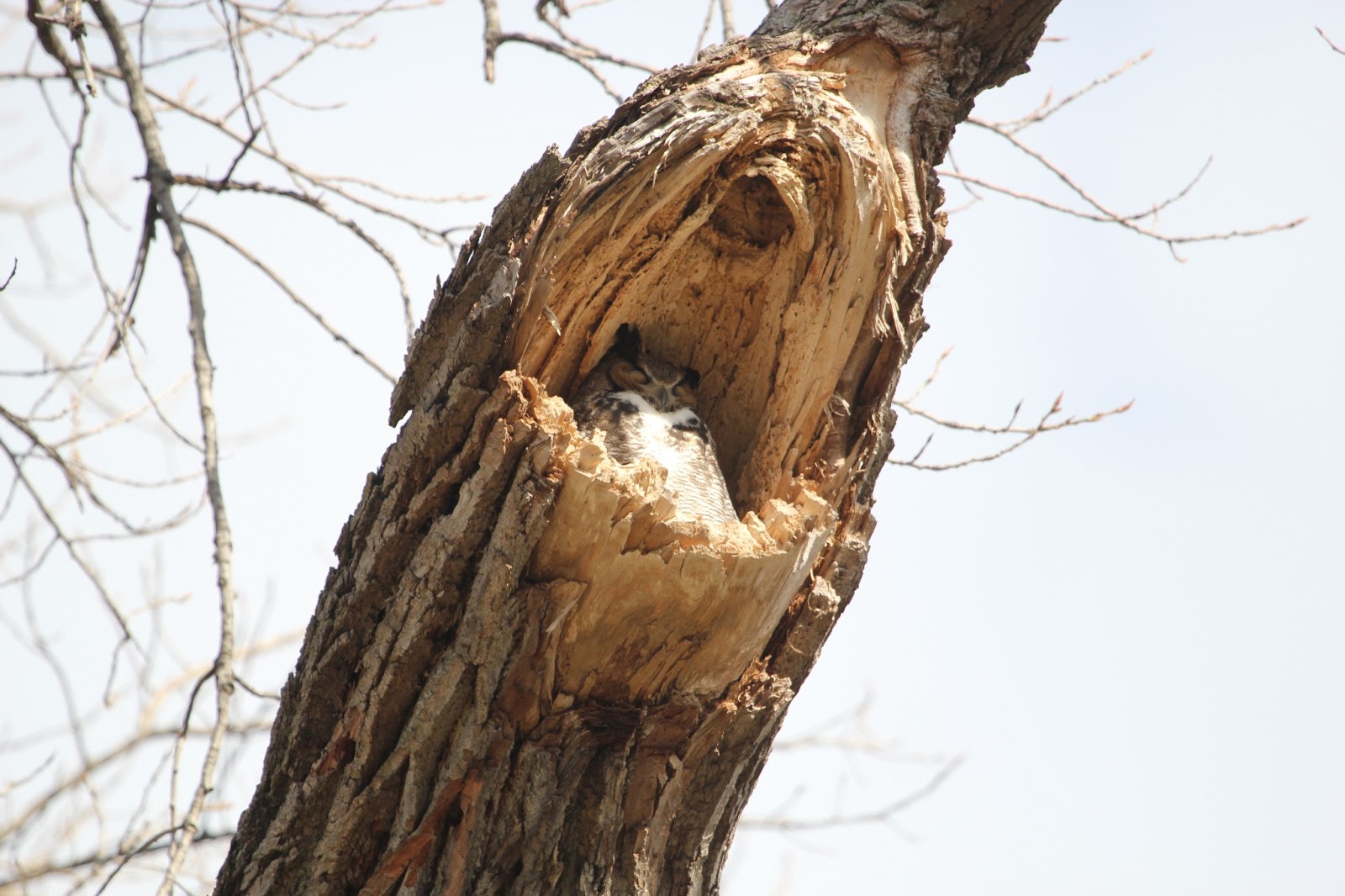 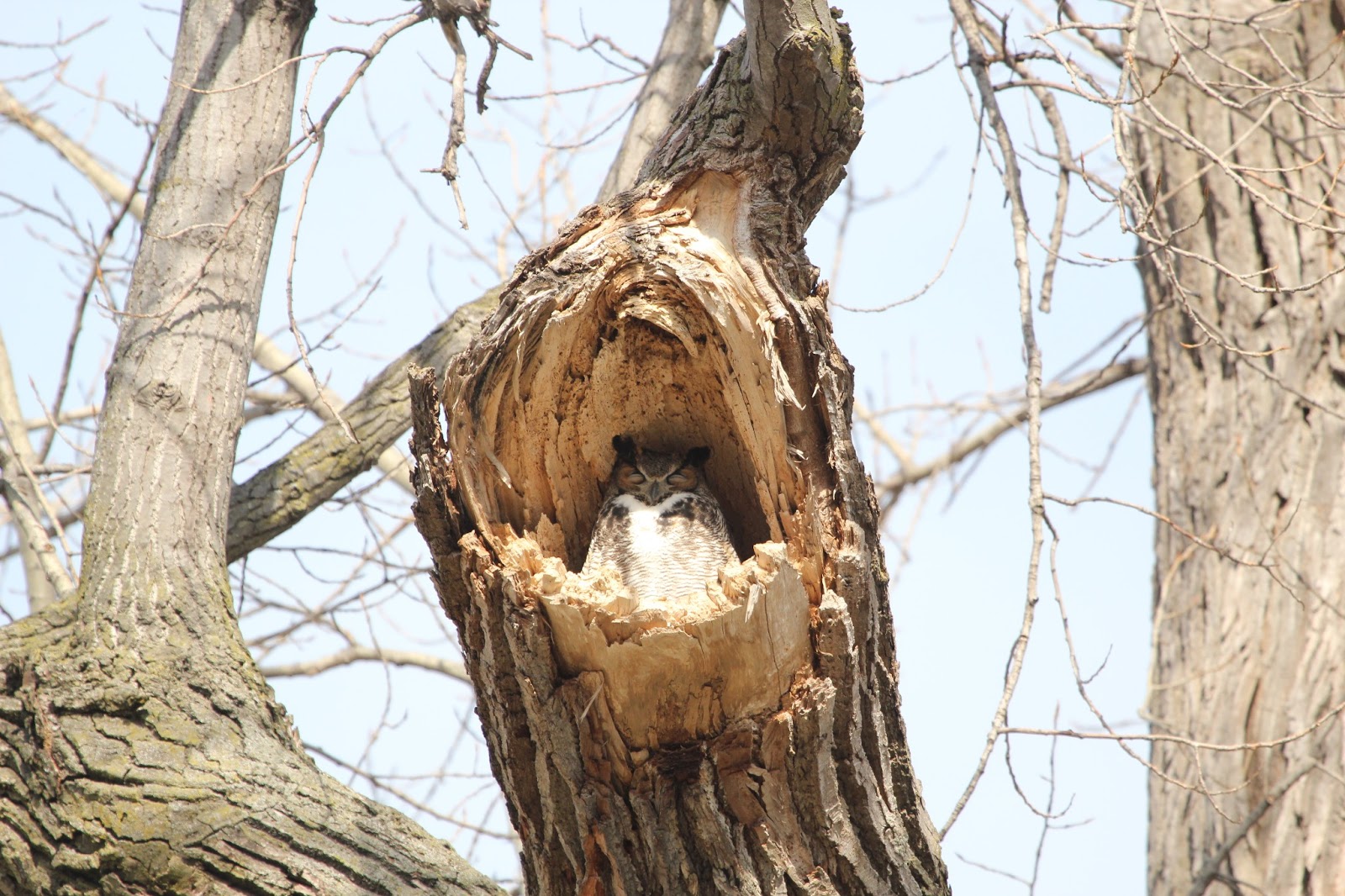 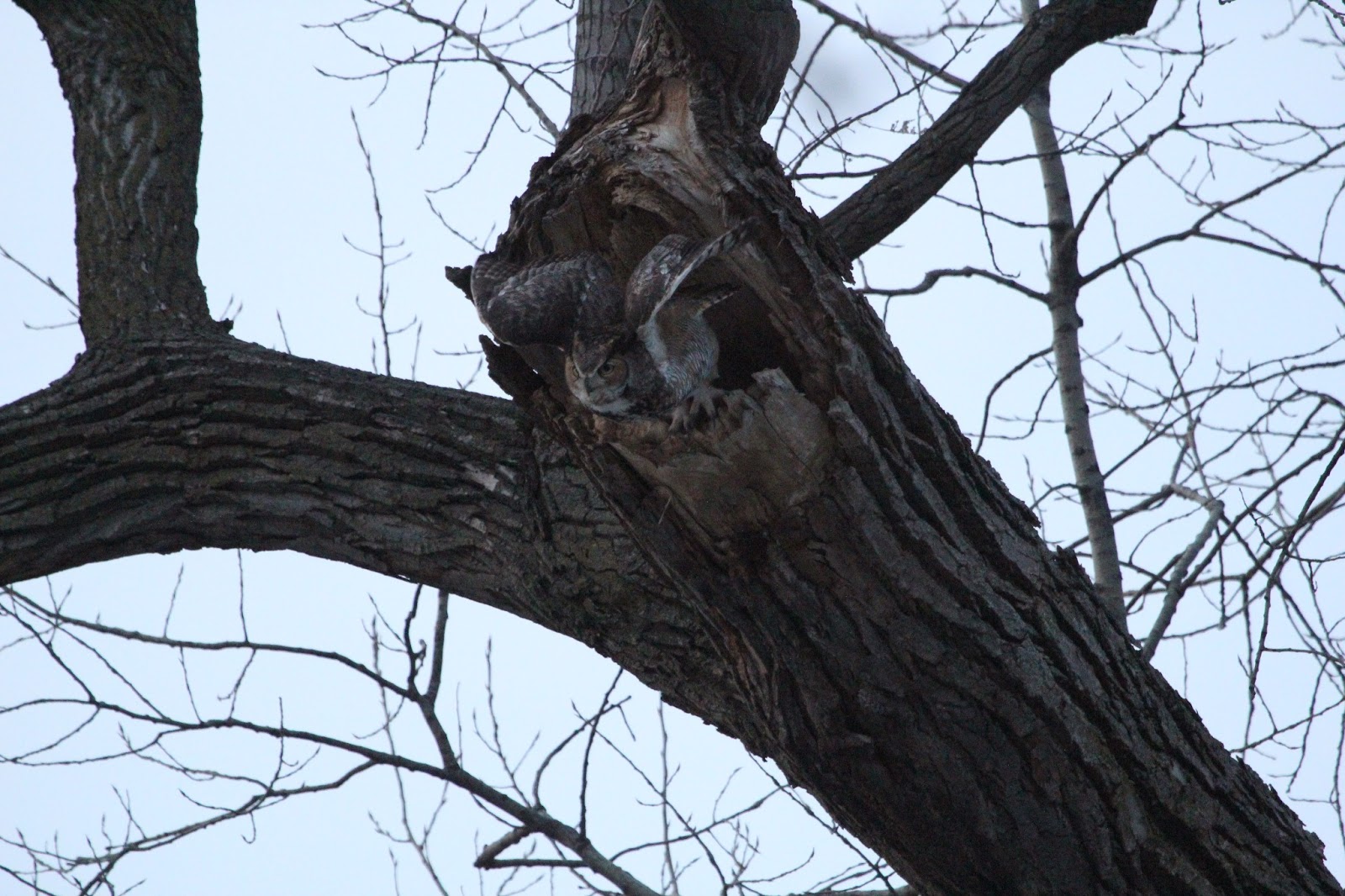 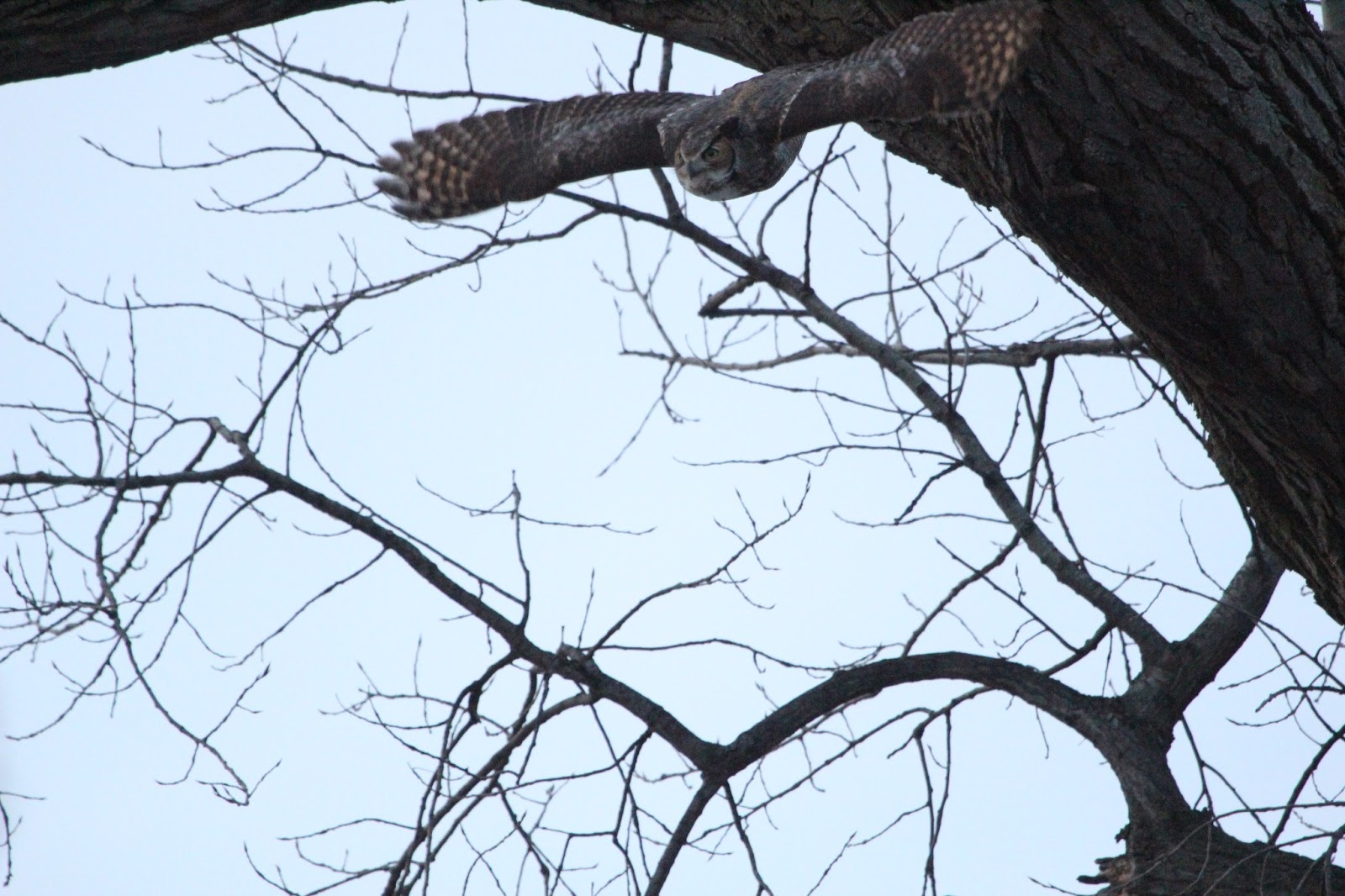 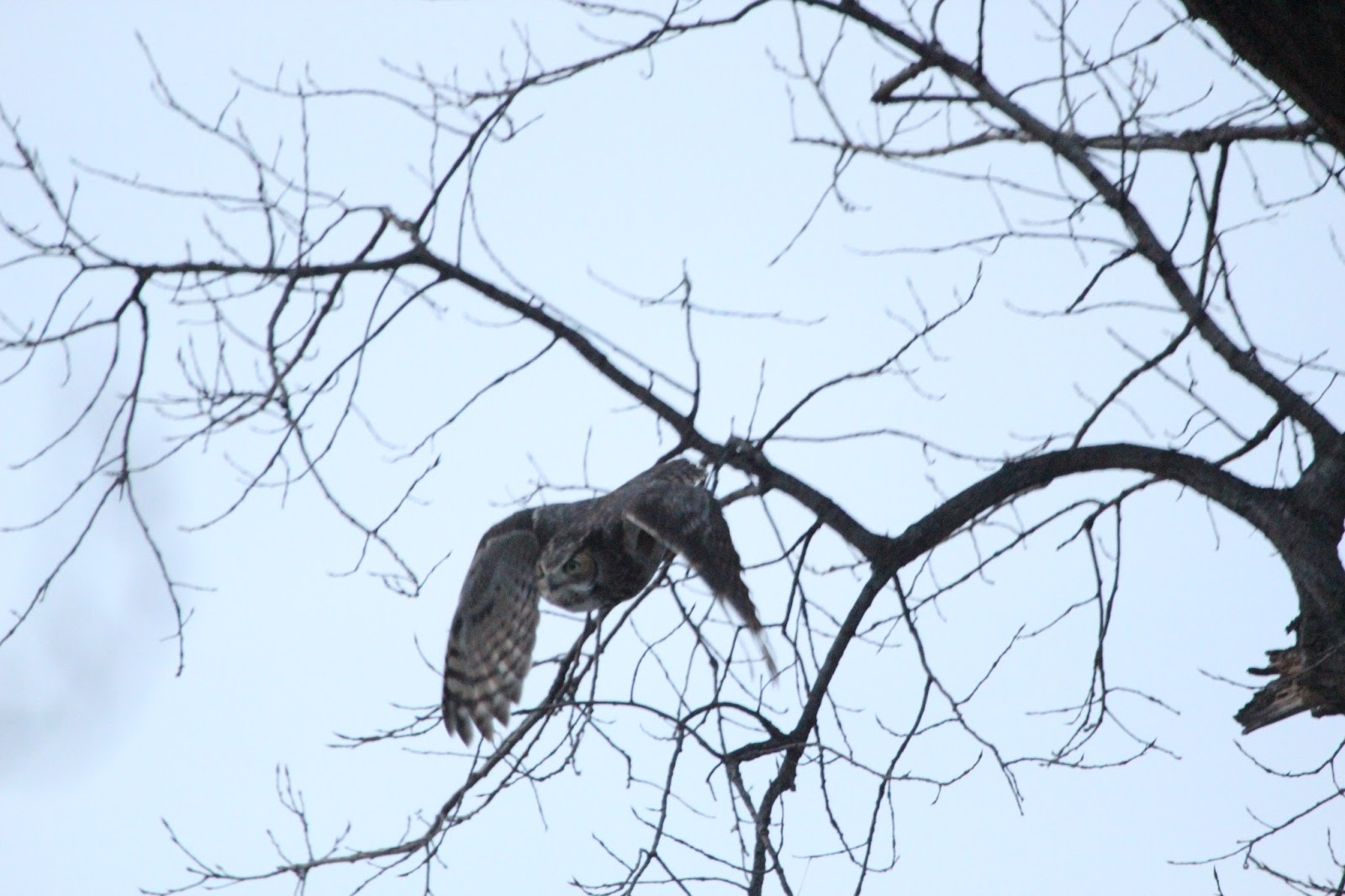 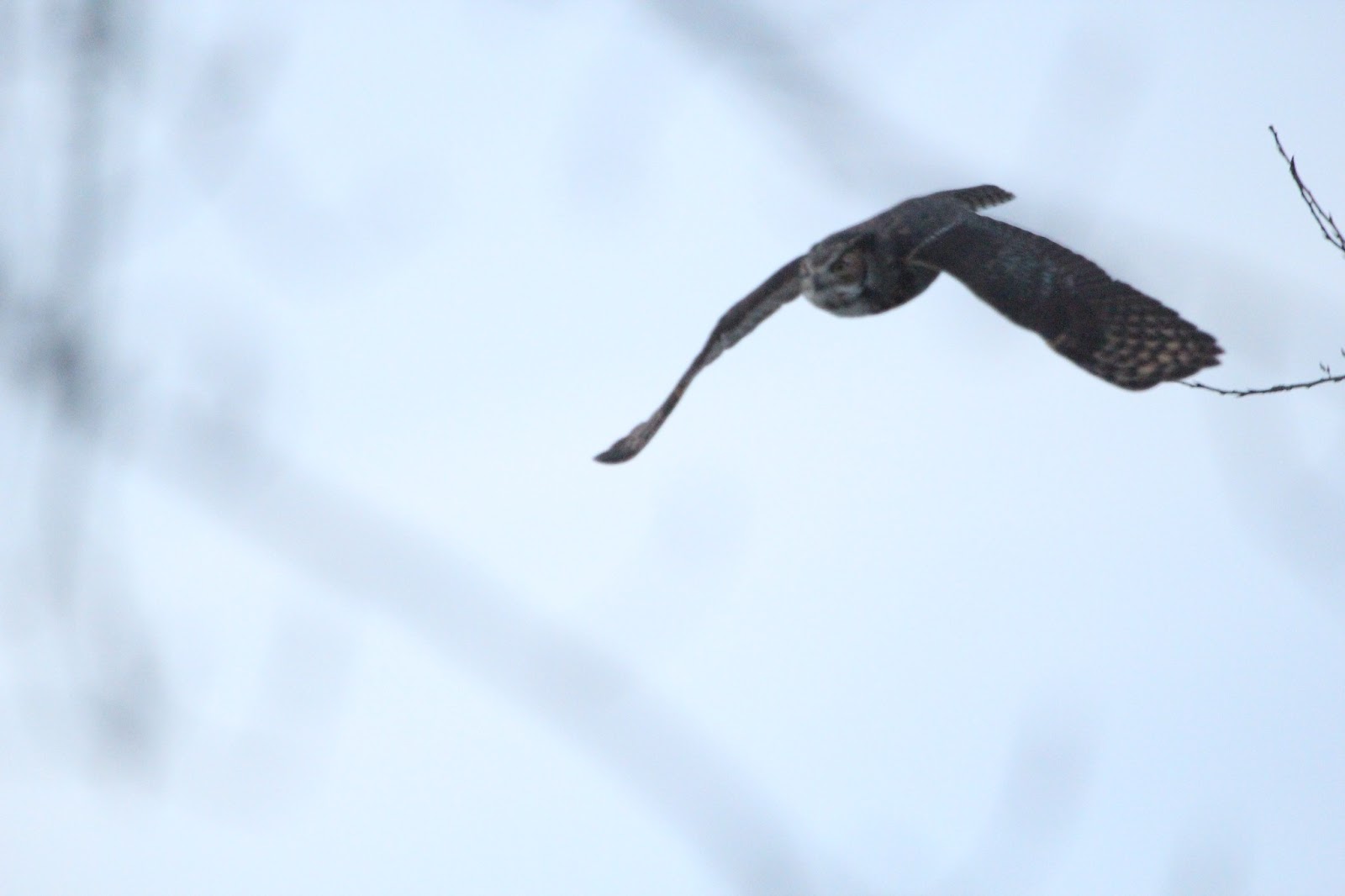 Once in The Fleur de lis Tree, he can often crash back to sleep. Here he is deep sleep on February 10.  Notice how high his lower eye lids are, this is indicative of said sleep. 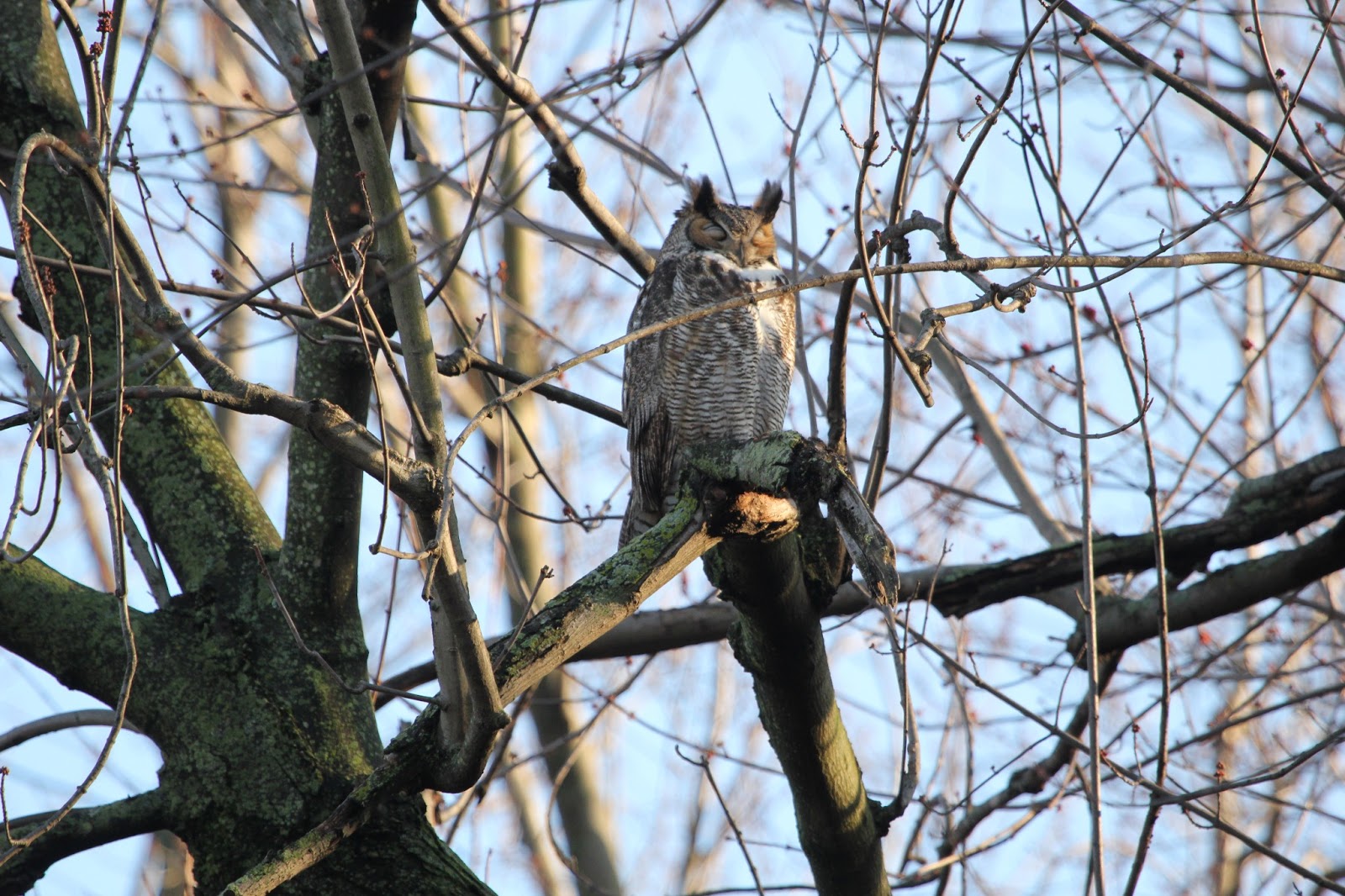 Eventually he will wake up and begin to groom, stretch and hoot. From last night, here is Charles in mid-hoot. 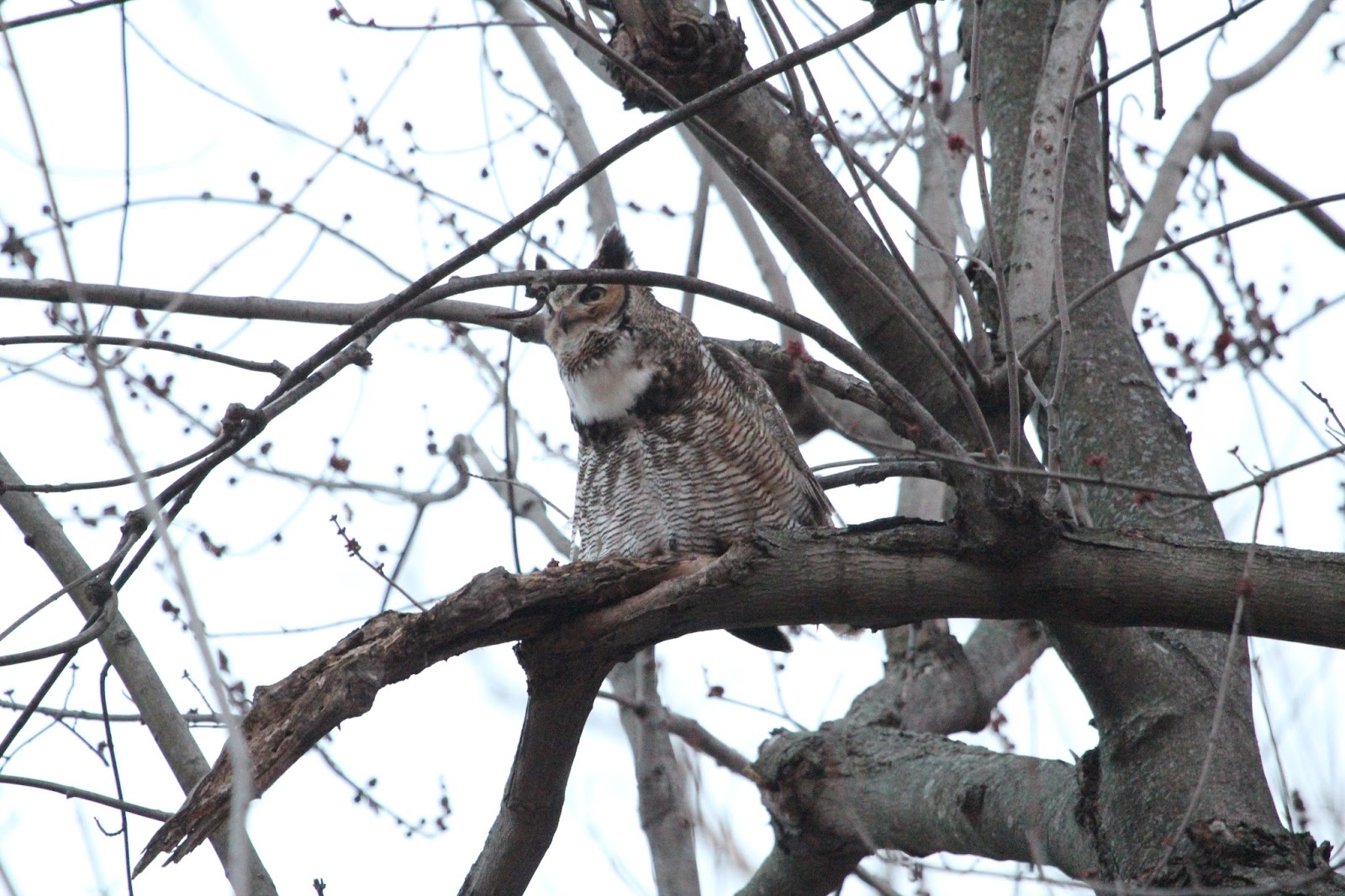 I have been able to get some nice HD video footage doing stretches and ejecting pellets as you can see below.

Charles has also mixed up his perch spots.  On a few rainy days and even on a clear night he has perched in a tree I call The Rain Tree.  A large arching branch has a few small branches coming off of it.  The small branches acts as a perch and the large branch acts as a shelter.  Historically, Charles uses this tree more than Sarah.  Here is a rare sequence of him yawning (and a bonus shot) taken while he was in this tree on February 11. 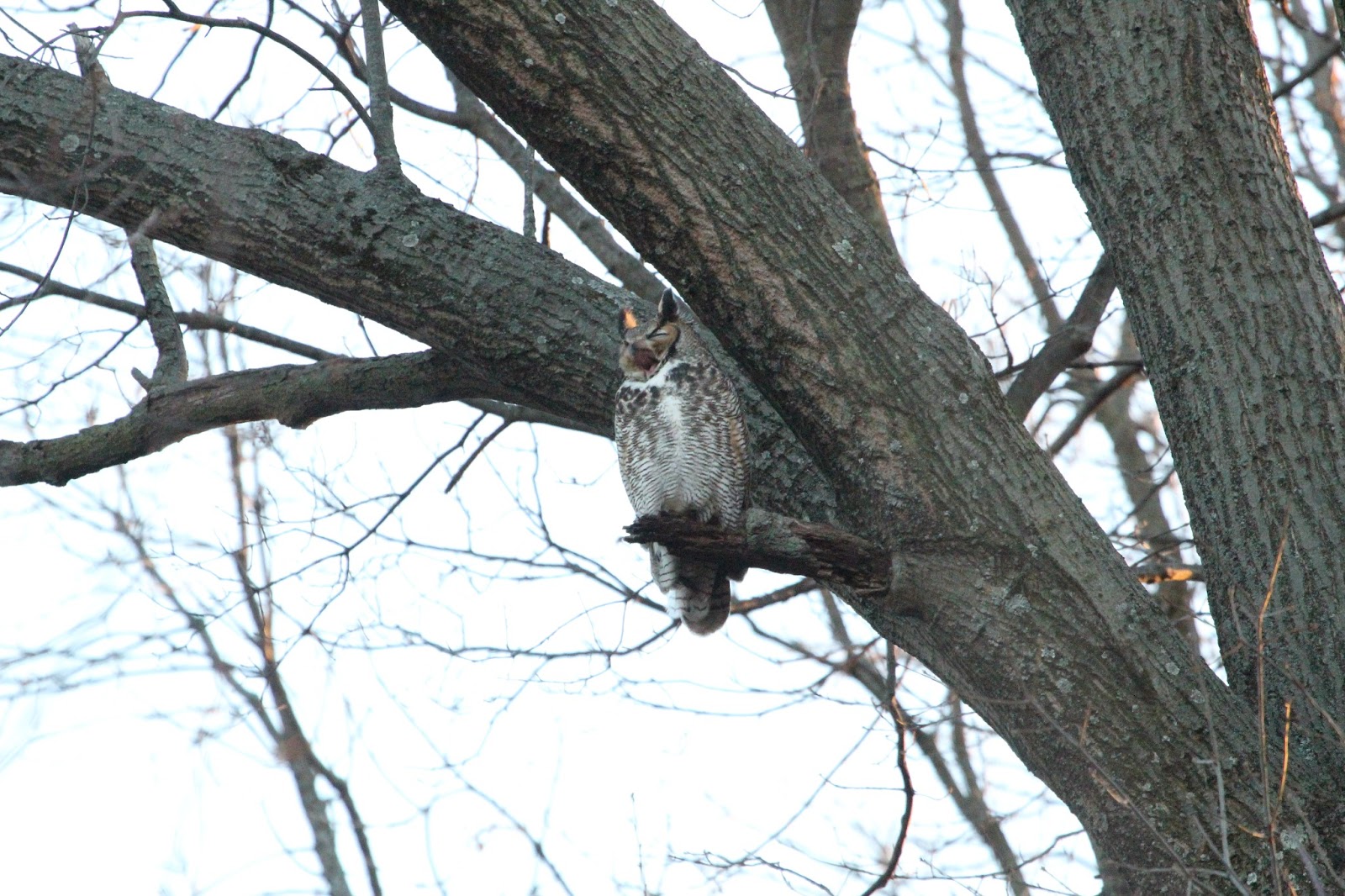 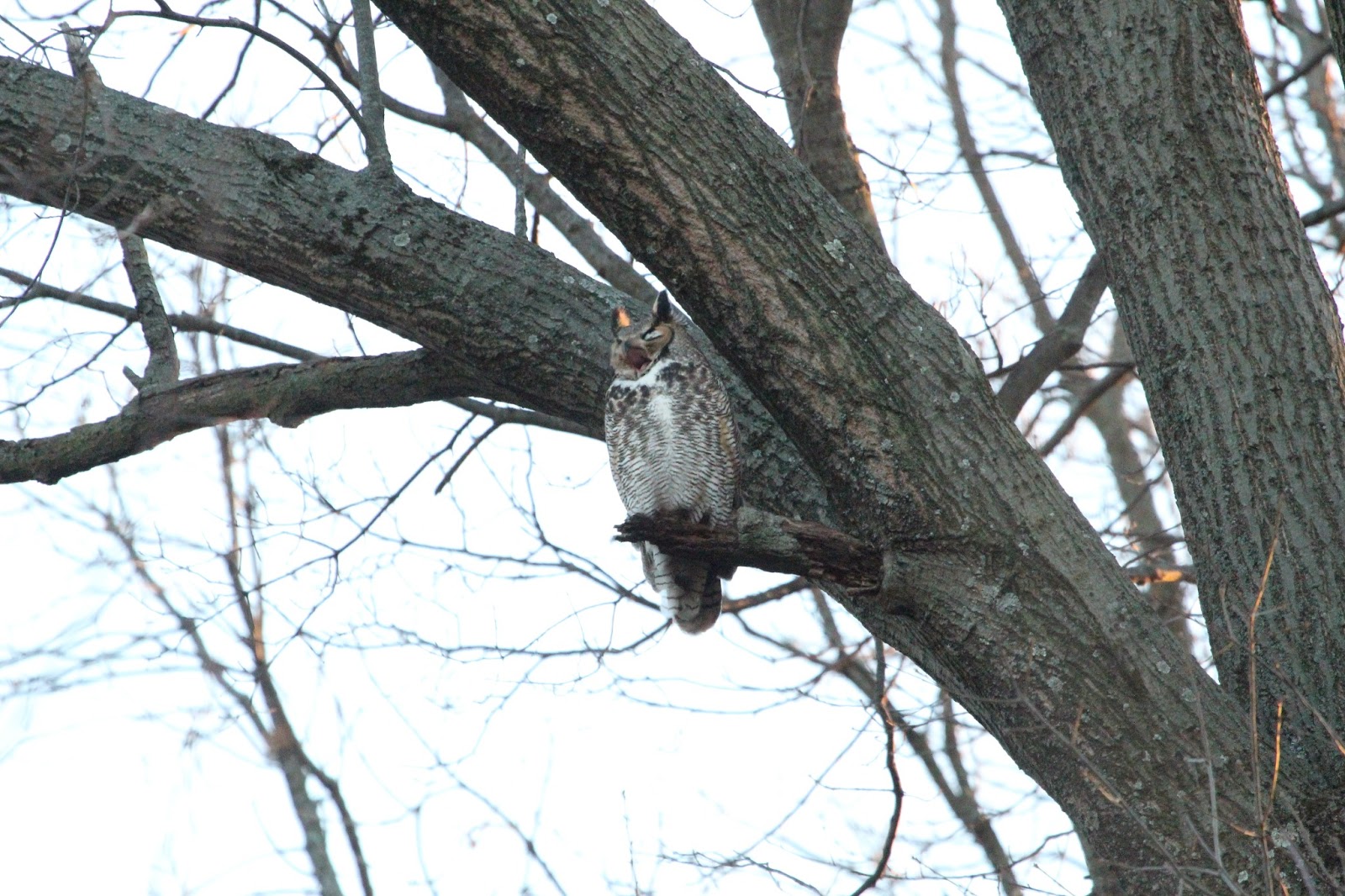 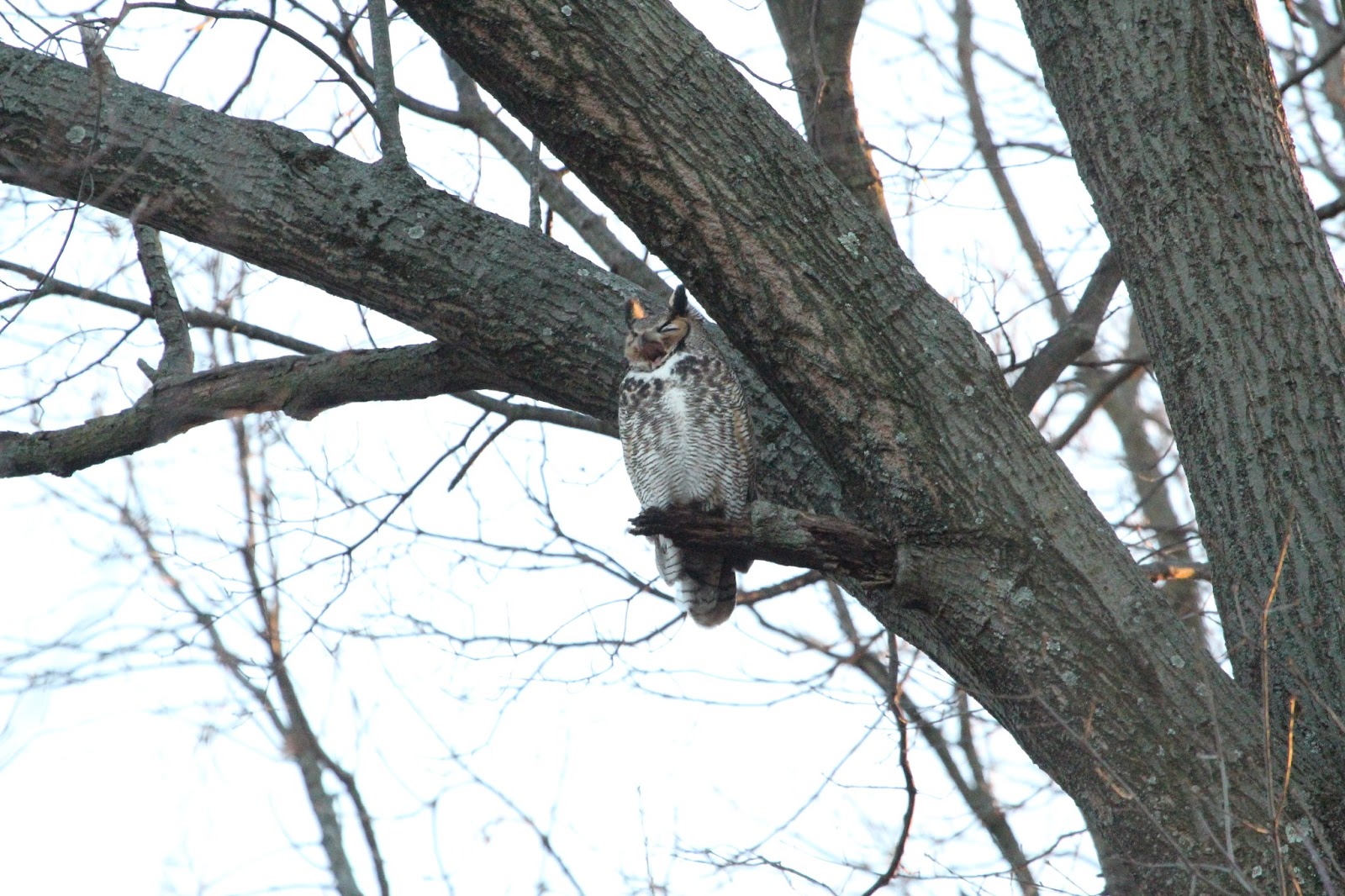 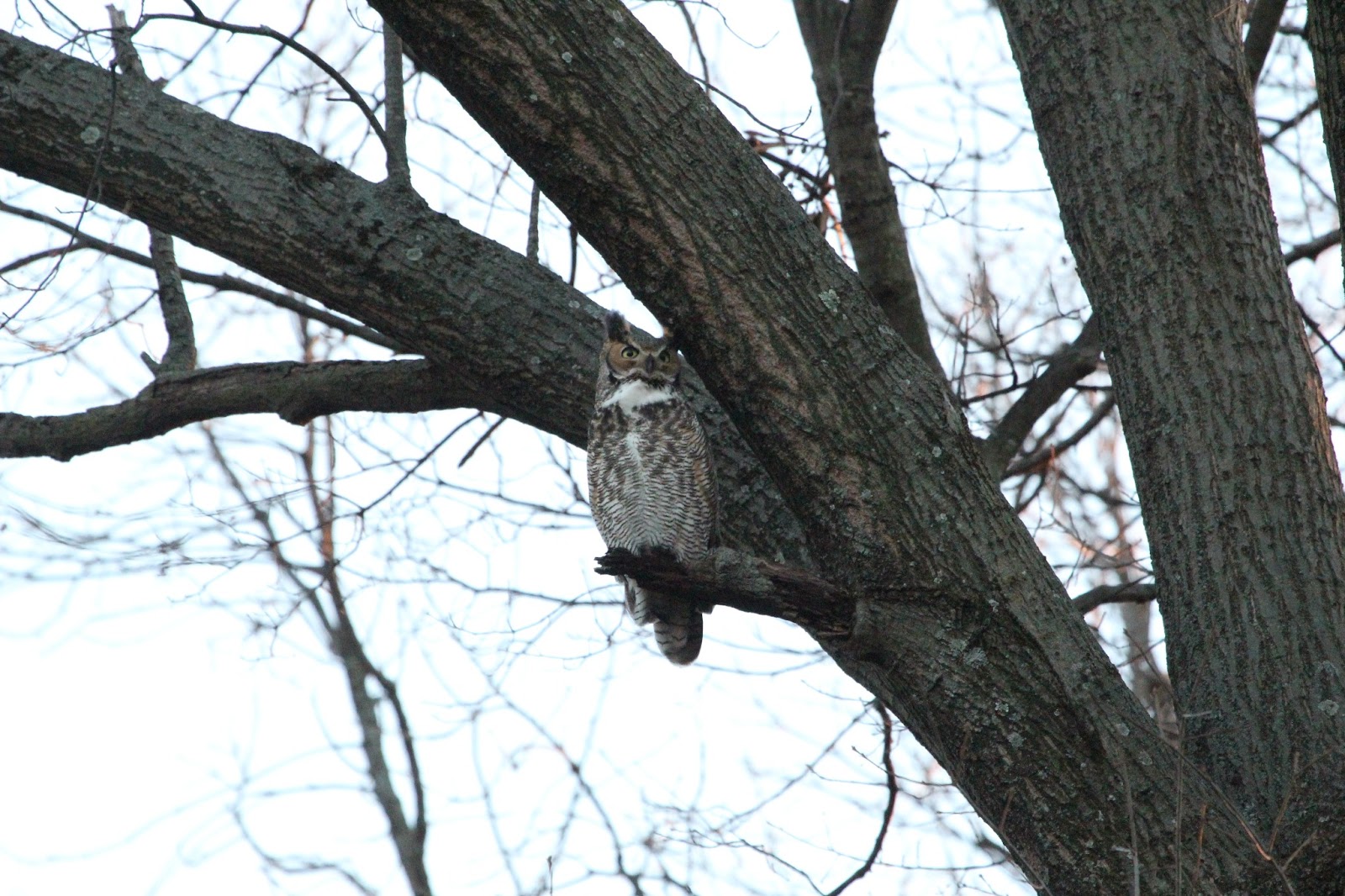 Other perches are used even less frequently. January 8 was unseasonably warm and he was perched in a favorite warm weather perch, The First of The Three Trees. 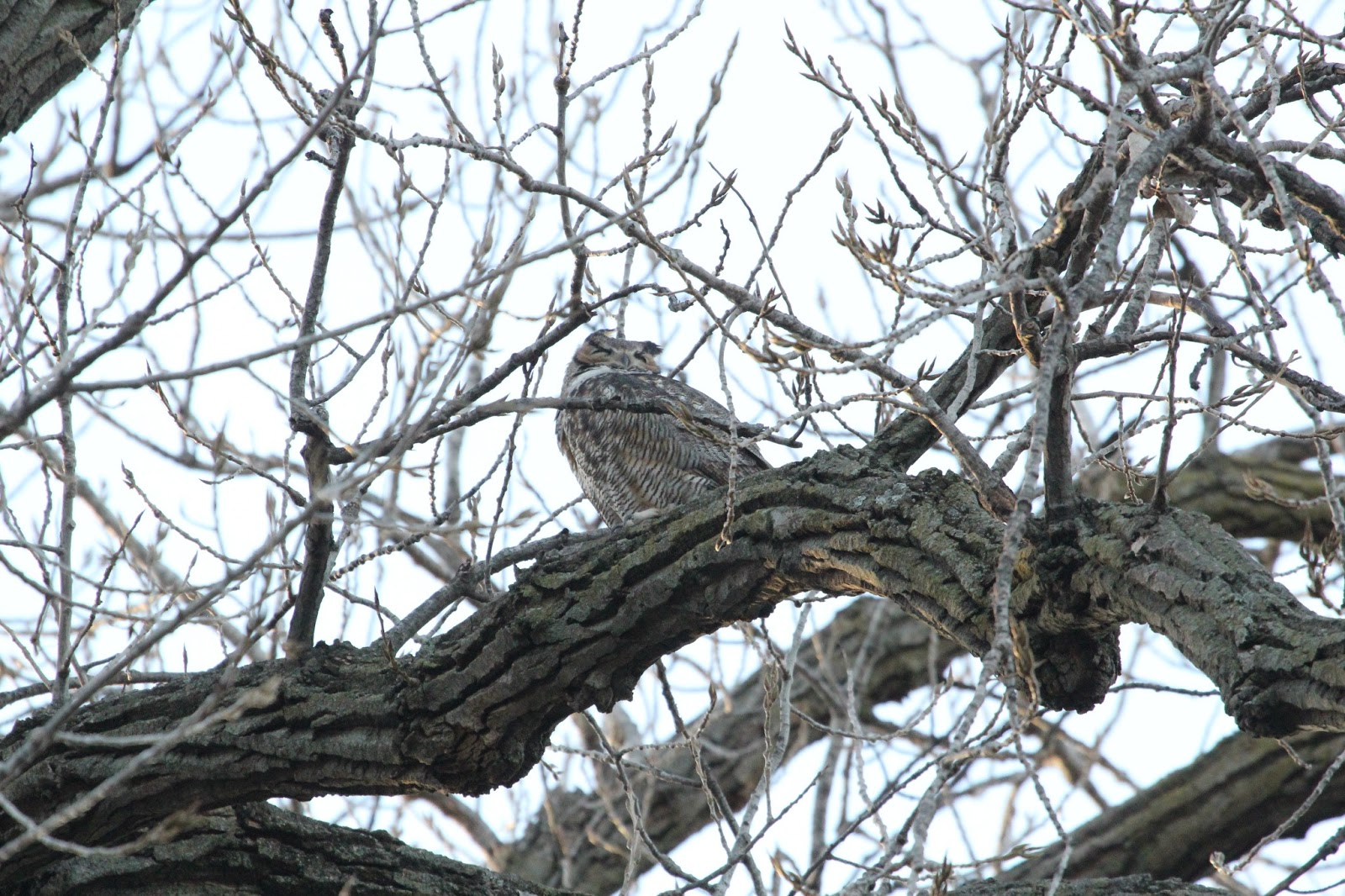 Charles' Favorite Conifer suffered greatly from last summer's drought.  Its needles are few and brown/red instead of deep, rich green. Generally this is one of his favorite perches from November/December through March/April.  However this year, so far I have only seen him in there a few times.  One of them was today during the nasty storm we had, in which every type of precipitation came down for hours on end.  Charles was in a less typical spot in his preferred pine palace but one that offered him good protection from the storm. 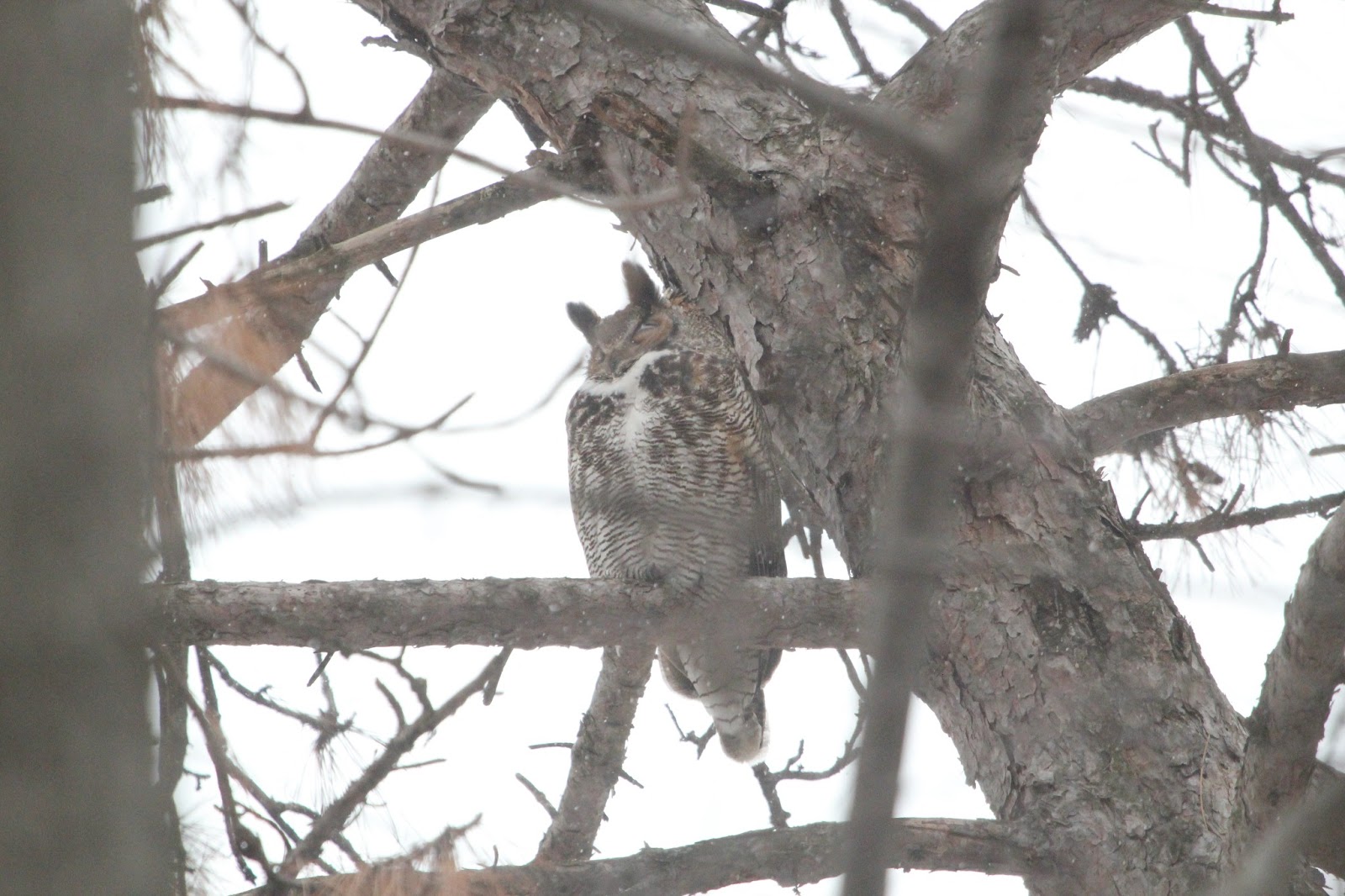 Thankfully this conifer is one of a small glade of four dubbed The Quartet Conifer and Charles has used another one of them on several nights.  We have dubbed this tree Charles' New Favorite Conifer.  Here he is bathed in the setting sun in this tree on January 18. 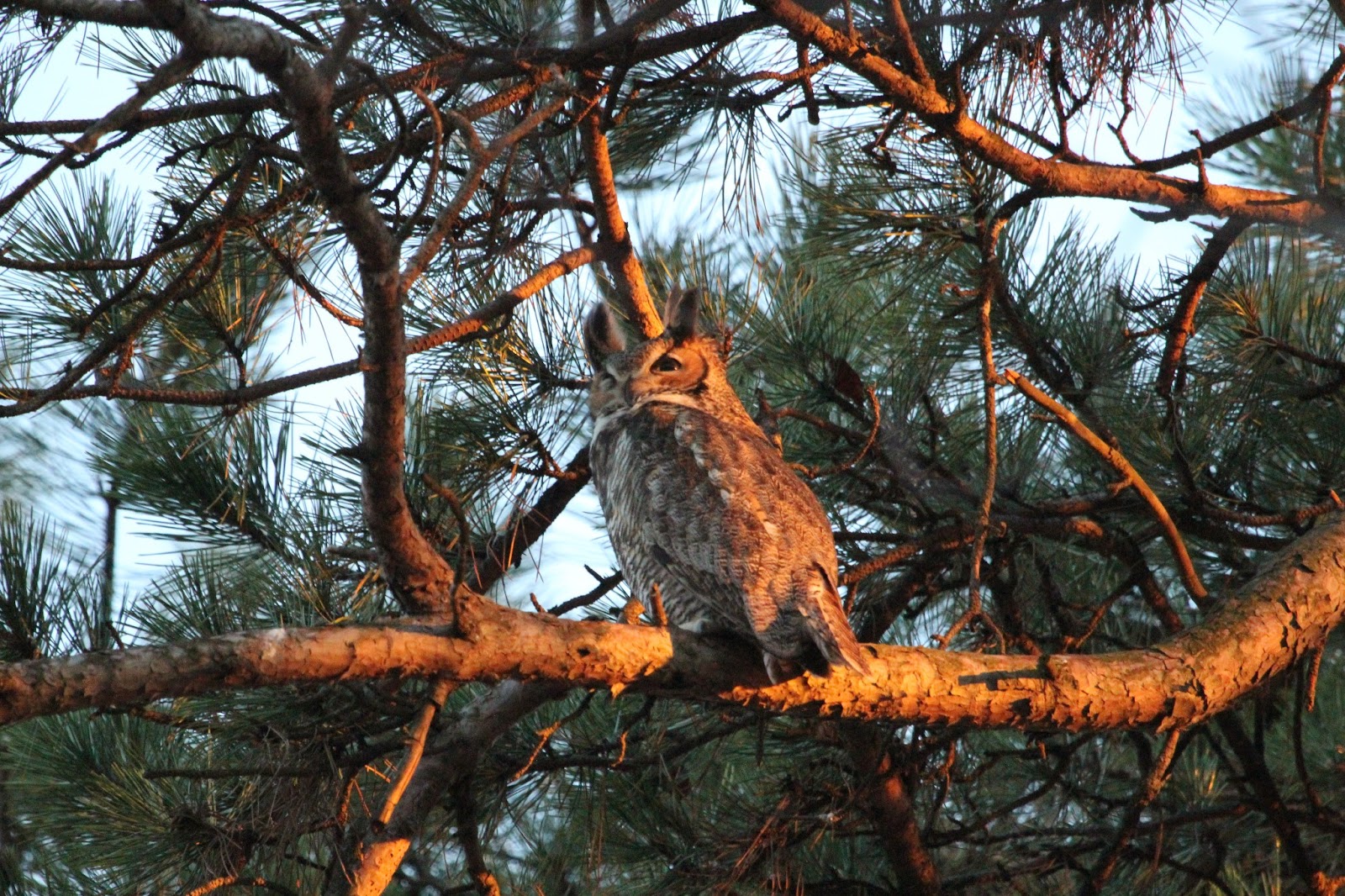 Check him out on January 23 ejecting a pellet and doing an Escalator Stretch.

As you see, Charles like to keep me and his many other admirers on his toes.  I'll have to do a whole other post about his hunting efforts now.  Thanks for reading!
Posted by Mark at 6:03 PM 8 comments:

Sarah Is In The New Issue Of "Missouri Conservationist"

Sarah continues to nest and although she is all but impossible to see in the high steep nest except when she takes short breaks out of the nest, she has recently been seen by thousands of people in Missouri and even beyond.  There is a gorgeous photo of Sarah and one of the 2012 owlets (Christopher or Velvet) in the new (February 2013) of Missouri Conservationist, the superb monthly magazine of the Missouri Department of Conservation.  The picture of Sarah is in an article on Short-Eared Owls written by and with accompanying photographs by Noppadol  "Nop" Paothang, one of the magazine's superb photographer.  You can see the article here and at the top of the article are nine separate photos.  The photo of Sarah is fifth of the nine photos. Check out her talons!  When people see with my camera equipment they often ask if I am a photographer.  I respond that I am a naturalist who takes photos.  Furthermore, I have friends and acquaintances who are professional or semi-professional photographer and to call me a photographer is to insult them!  Photos like these by Nop are abundant proof of the difference.

If you are not already a subscriber to Missouri Conservationist, I highly recommend that you subscribe to it immediately.  I look forward to its informative articles and superb photography every month.   A subscription to it is free to all Missouri households.  I am embarrassed to say that I have only been a subscriber for a few years but it is never to late. This link provides subscription information.

I was tipped off about Sarah's appearance in this issue a few weeks ago by Nop himself, which just made my day.  I had the great honor and pleasure to meet Nop last year, another day making event itself.   I had always admired his work and had heard great things about him but to meet and chat with him took it to another level. His work speaks volumes but to converse with him revealed his copious knowledge of wildlife and a warm, welcoming and modest personality.

In addition to his work for MDC, Nop has his own photography site/business, which you can check out here.   In summer 2012 Nop and the writer Joel M. Vance put out a brilliant book about the grouse species that inhabit North American prairies entitled Save The Last Dance: A Story of North American Grassland Grouse.  This most recent Xmas I received a copy of this book as a gift from my friend and owl mentee Brenda Hente.  Brenda and Nop had corresponded and Nop kindly inscribed the book to me.  I have only had time to take a few looks at the book but trust me when I say it is superb.  It is also inspiring as a model of how to put together a book on a focused wildlife topic.  I hope to write a book or several books on Charles and Sarah and my work with them, their offspring and the wildlife of Forest Park. Thanks for reading!
Posted by Mark at 4:26 PM 1 comment: