The Owlets Have Dispersed

Sunday, August 7, 2011
After a week of not seeing this year's owlets, Dalton and Monica, I am "making the call": the owlets have left the territory and are out on their own. This is always a bittersweet time. I miss seeing the owlets and their gradual growth and progression. At the same time I am excited that they are heading out to the big wide world and I wish them well with all the many challenges they face. It is also nice to see Charles and Sarah again just as a couple. Great Horned Owls have the longest breeding/offspring rearing season of any owl in North America. The parents only have a short time each year that is not leading up to or directly involved with having and taking care of youngsters. They are now truly empty nesters!
Dalton and Monica hatched sometime in late January to early February so they are six months old. This is the regular age and stage for owlets of the species to disperse. They are large, powerful owls and they have been well taken care of by their devoted parents.

The dispersal process is a natural one and though it can appear tough, it is an important process for several reasons. The owlets are encouraged to disperse by the parents. The parents stop bringing food to the owlets, who are already doing some hunting on their own. This food stoppage forces the owlets to head out and hunt and even disperse. If the owlets continue to remain in the parents' territory they can be chased away by the parents.

On Friday, July 29 I saw what I am 90% certain was Charles chasing one of the owlets away from the territory. I had found one of the owlets and both Charles and Sarah. Charles and Sarah have been duetting a lot recently to re-proclaim their territory and cement their pair bond and this night was no different. As the duet came to a conclusion I reacquired Charles in The Middle Conifers. I was showing him to a few passersby (I'm always keen to do some owl/park ambassadorship) when he flew to the top of a small conifer in The Mixed Glade. Moments later he flew further into the glade and then I saw another owl. It headed out of the glade at great speed followed by Charles. I don't think this was one adult following the other out to hunt, which I have seen before but Charles chasing the owlet out of the territory. Watch for yourself:

It's understandable to feel sympathy for the owlet but this is a natural and important process. If the owlets remained on the parents territory, the impact on the population of prey animals would be intense and in some cases, near catastrophic. Great Horned Owls require a great deal of food to survive and their presence makes a large impact on prey populations and even other predators, some of whom can be eaten by Great Horned Owls. If the owlets stayed and there were now 4-5 GHOs instead of 2, even the abundant prey populations of Forest Park would be severely impacted. Dispersal by the owlets also helps spread out and deepen the genetic pool, which is vital for the health of the species as a whole.

I have more to write about Dalton and Monica and what I observed of them this spring and summer. They were special owlets. One of the most amazing things I experienced with them was getting very close to them on several occasions this summer as you can see in the below photos: 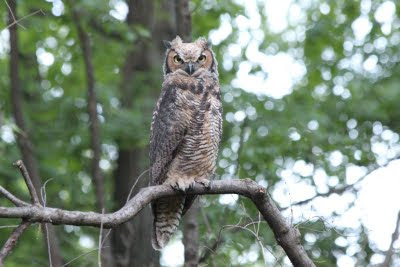 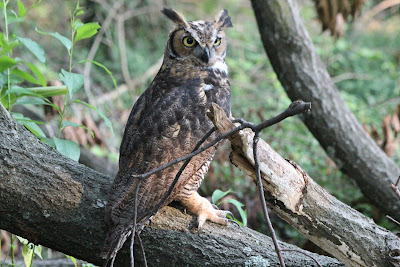 Be safe and good luck, Dalton and Monica! Thanks for reading!
Posted by Mark at 8:14 AM