Upcoming Talk At The Maplewood Public Library on January 24, 2013

Hello and Happy New Year, everyone!  I hope the New Year is going well for you all.  I am happy to say that it going well for the owls and my work with them.  Sarah is now past the two week point of nesting and it is likely, if all has gone well, that she has laid her eggs.  Here she is flying out of the 11/13 Nest Hollow on January 7, 2013. 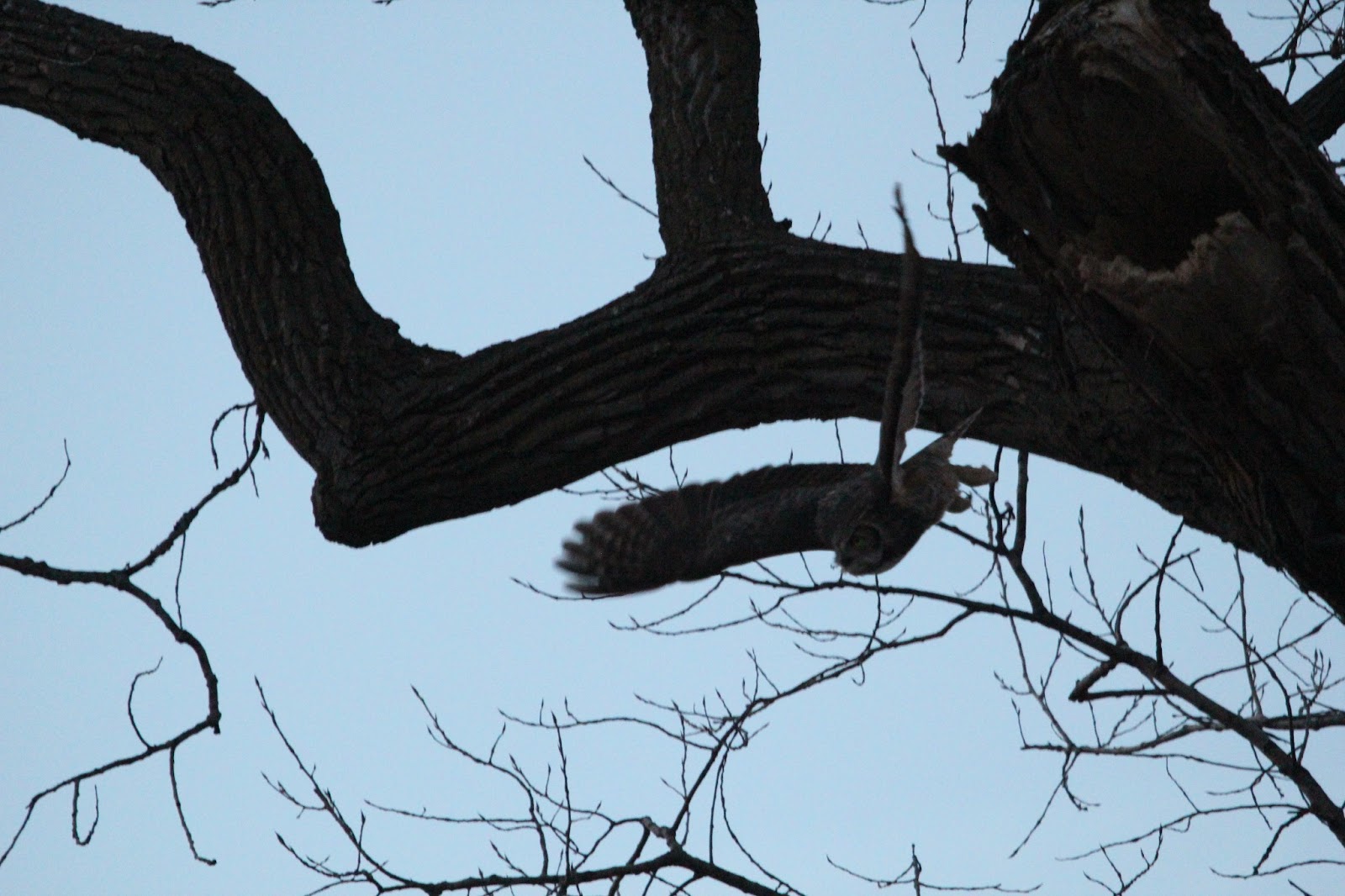 Charles continues to fulfill his role of food provider and nest sentry. Here is Charles (right) giving Sarah (left) some prey that he had just caught and partially eaten on January 5, 2013. 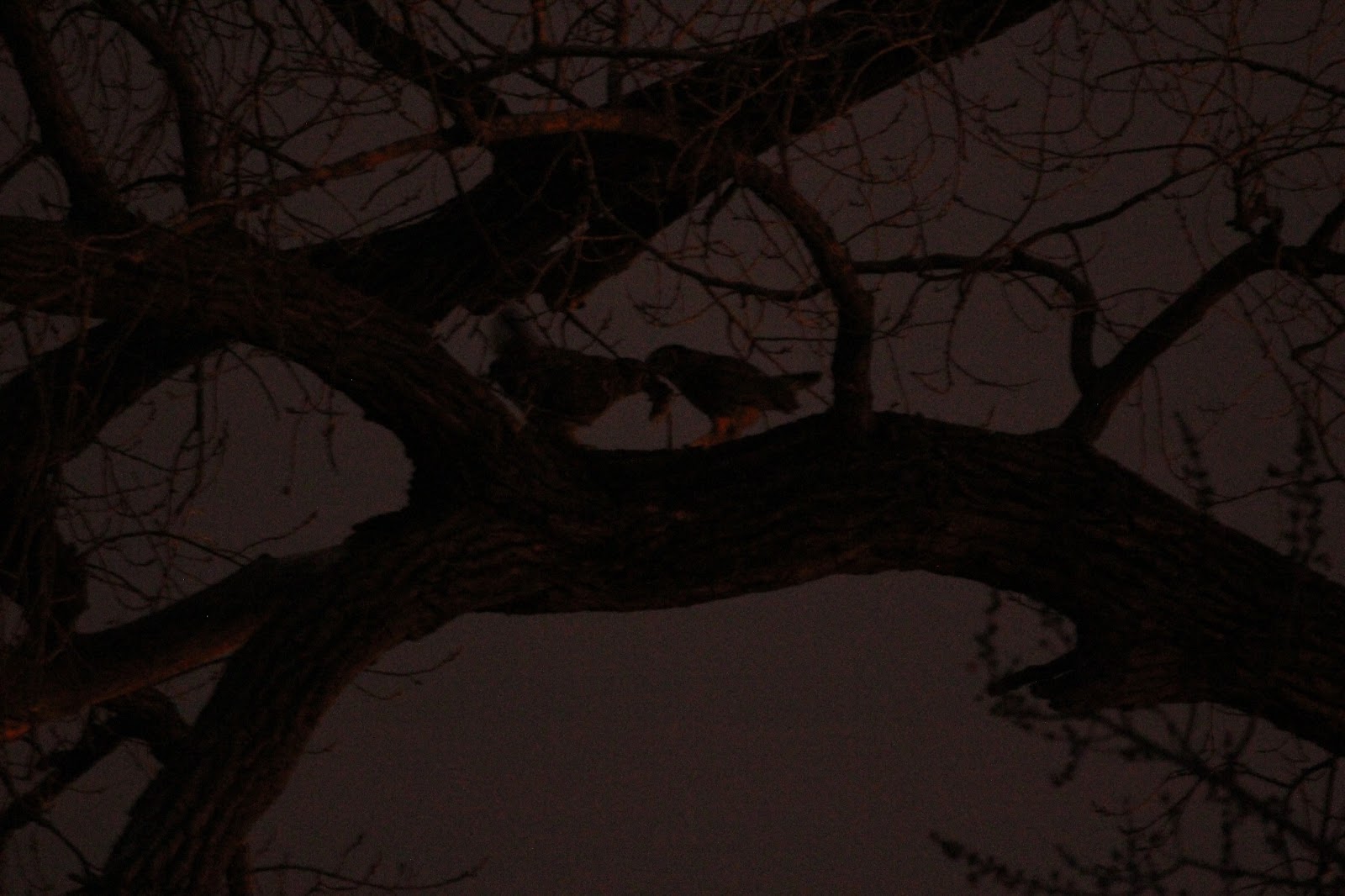 In my recent post about reaching my seventh year of owl observation and documentation, I mentioned that in 2012 I gave seven talks on the owls and my work them to a variety of organizations and audiences.  I am happy to say that I already have three planned for 2013 and hopefully more to come.  The first talk will be next week, Thursday, January 24, 2013 from 7:00-8:00pm at the Maplewood Public Library in nearby Maplewood, Missouri.  I would be honored to see you there!  Here are links to the library's FAQ with directions to the library (it is both easy and tricky to get there!) and a brochure for the talk itself. 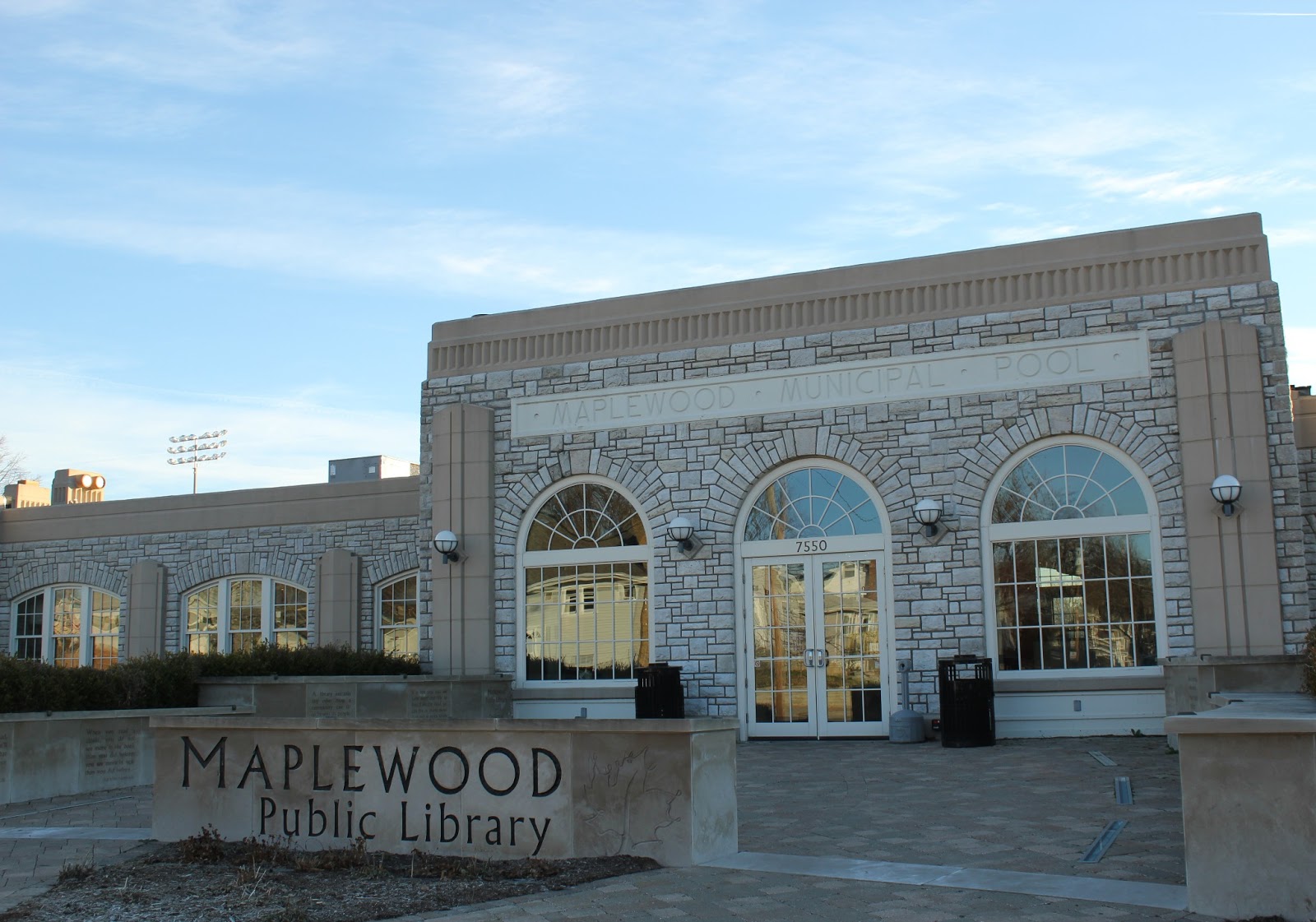 The genesis of the talk was a phone call from this library's Program Director, Dawn Yourtee.  She called me in the summer of 2012 and asked me if I would be interested in giving a talk at the library in the new year..  I immediately and enthusiastically accepted her offer.  After we discussed details such as format, AV equipment and the like I asked how she had heard of the owls and my work them.  Dawn graciously explained that one of the library's patrons had been to one of my talks and generously raved about it to Dawn.  It is always heartening to hear that one opportunity generates a subsequent one. I thanked Dawn and we agreed to stay in touch as the months went by before the talk.

During this time, she contacted me with the above flyer to which I made a few corrections and suggestions, which she kindly approved.  Later on she asked me if I had any items that might be suitable for a display case at the library.  I replied that thanks to a solid and consistent number of appearances in a variety of publications along with thank you notes, pictures and other ephemera that I had good and appropriate content for a display case.  With Dawn's help I set up the materials in the case in December and here's what it looks like. The case is immediately to the right of the library's doors. 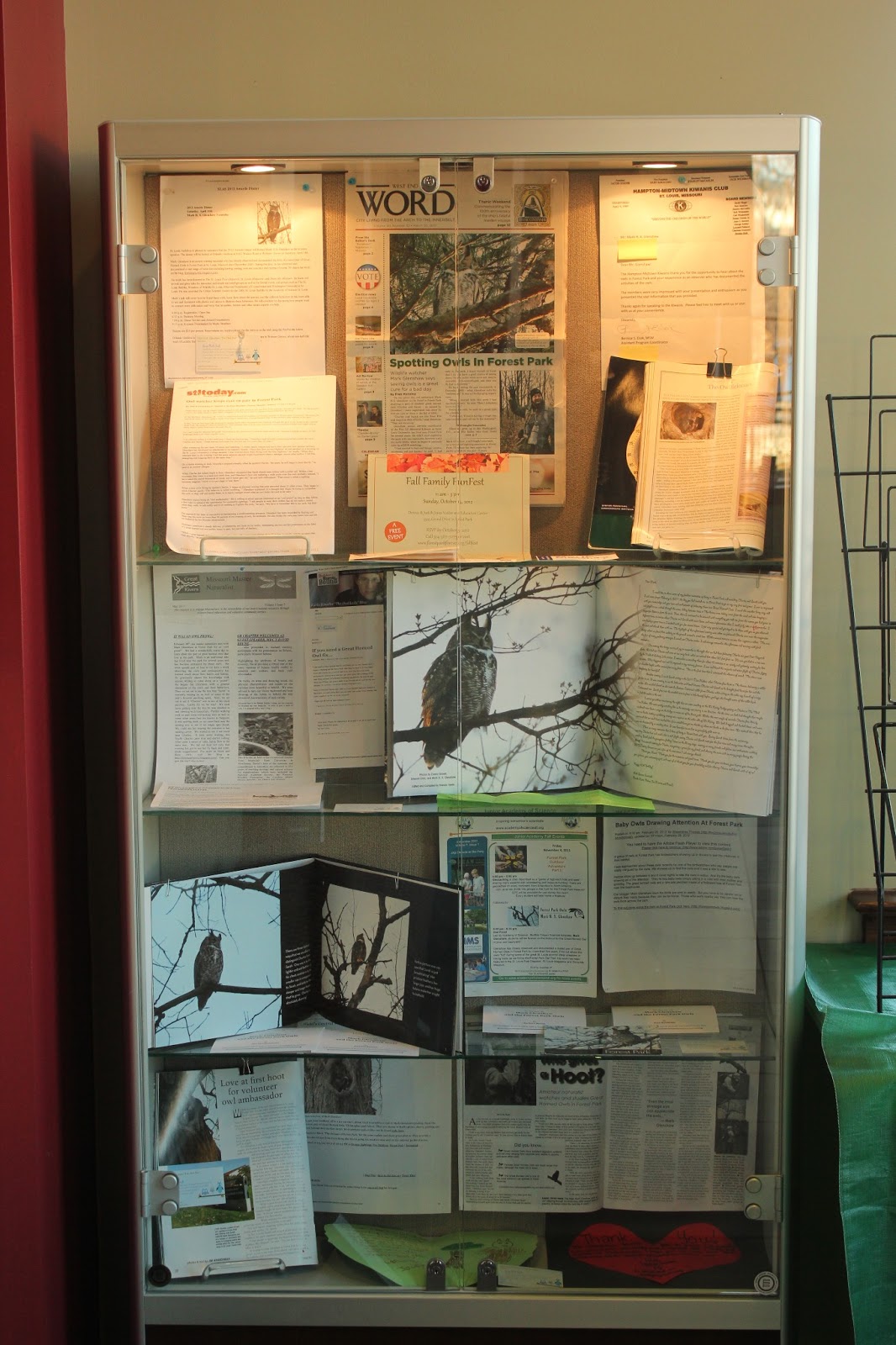 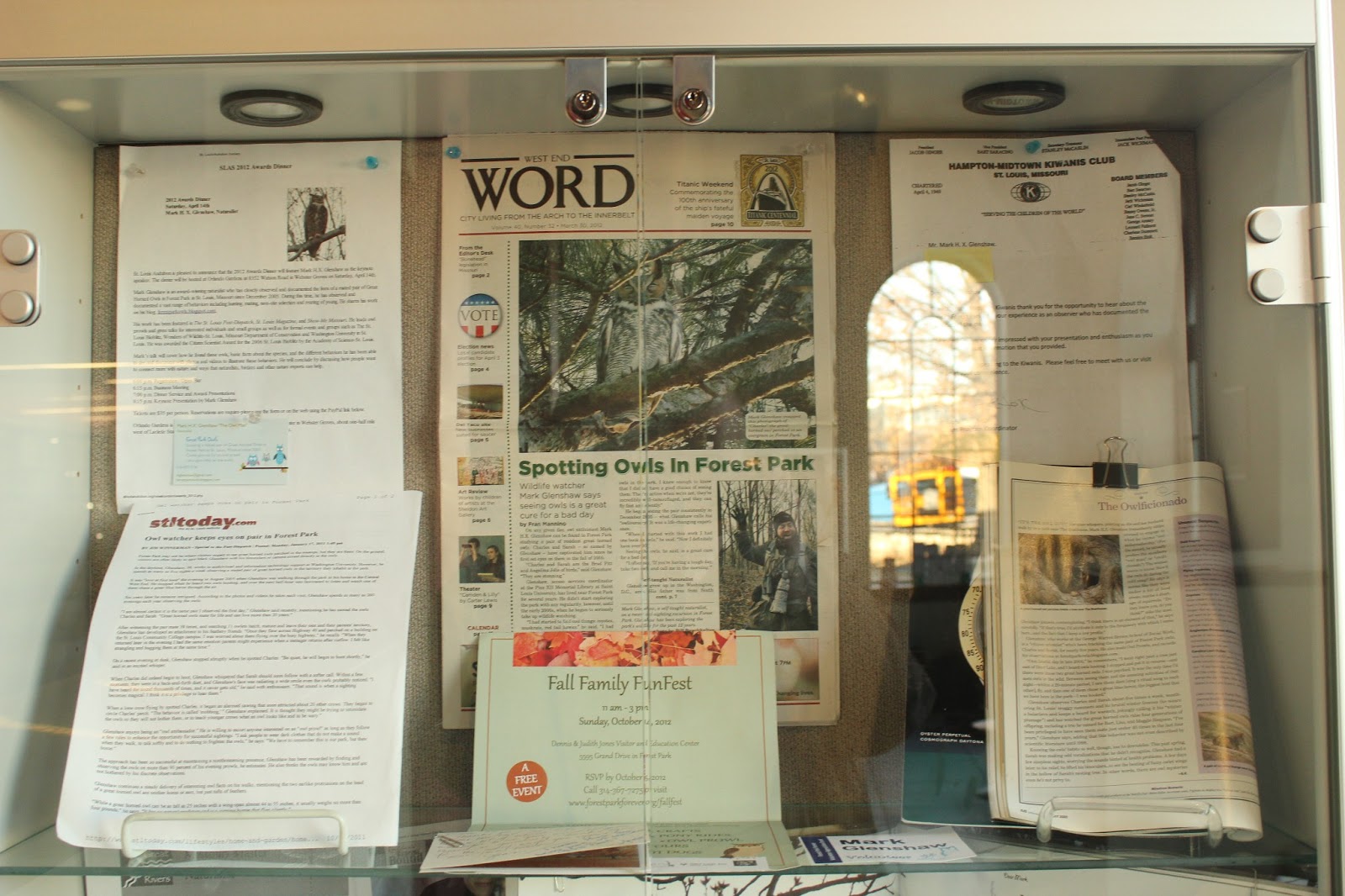 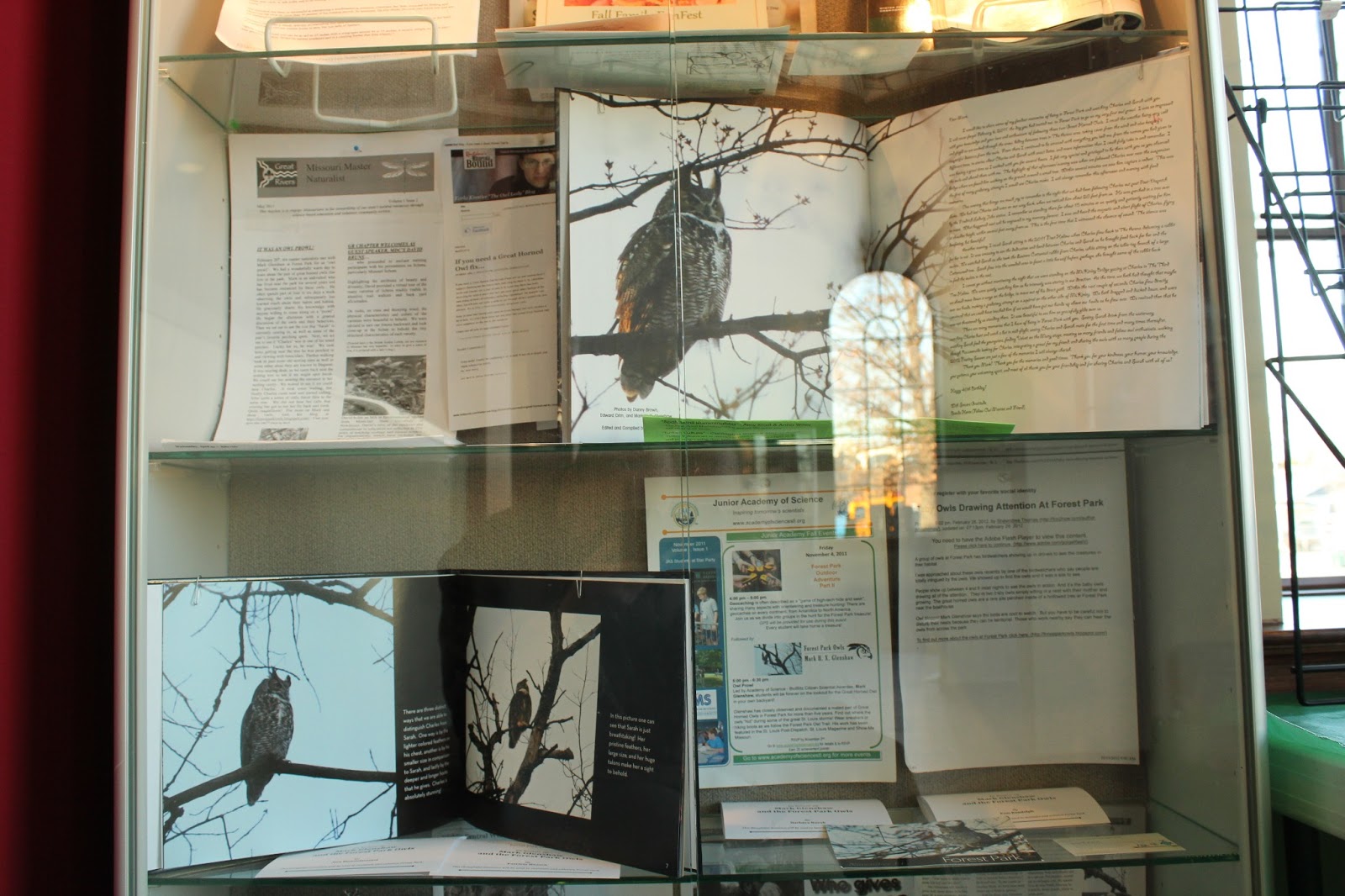 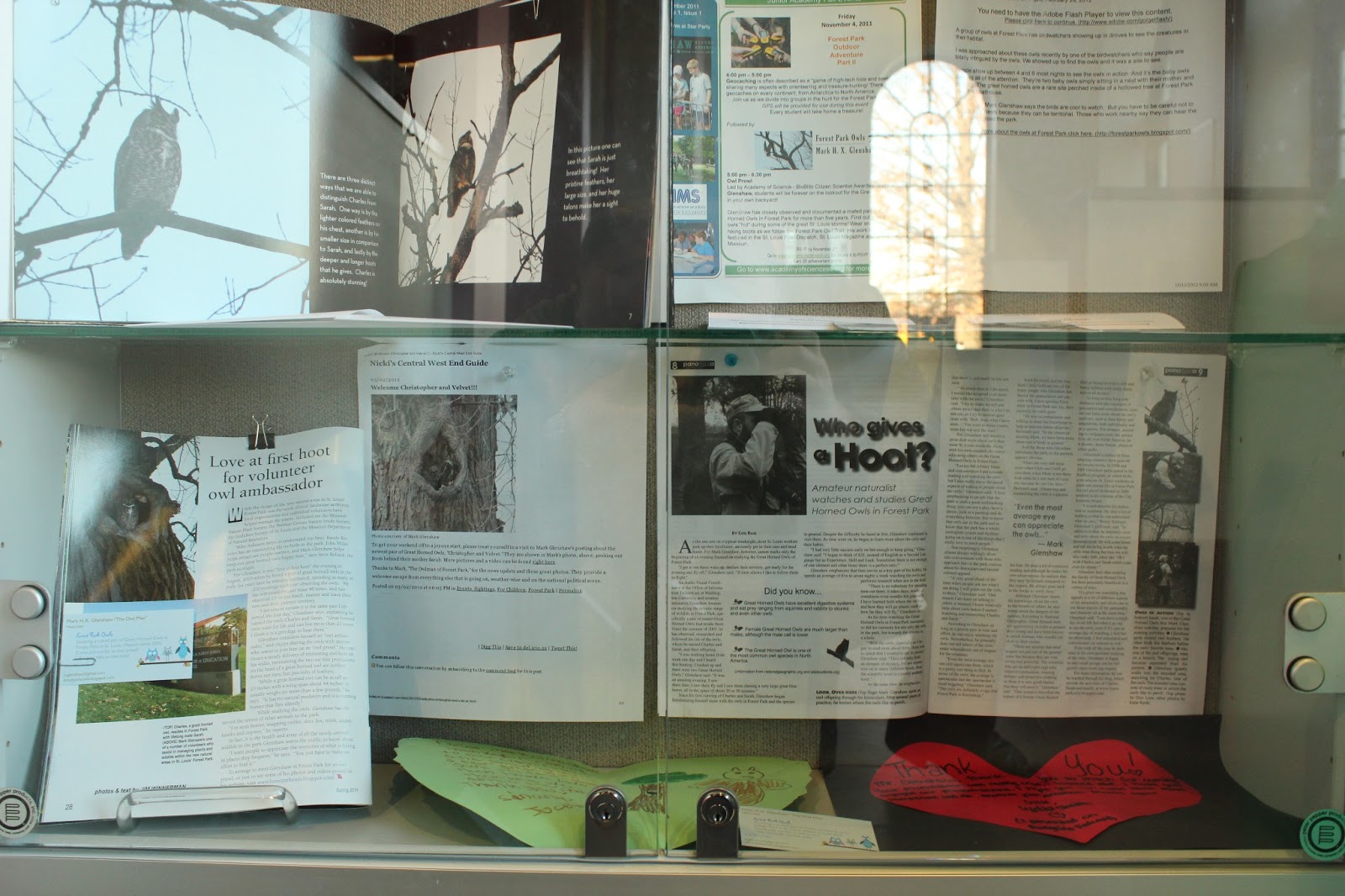 I hope to see many of you next week, January 24, 2013, at this talk. If you can't make it, I will let you know about the other talks I have coming up this year right here on this blog.  Thanks for reading!
Posted by Mark at 7:48 AM