I'm excited to be giving a new talk on the owls tomorrow, Saturday, September 28 at the Maplewood Public Library in Maplewood, MO.  The talk is titled, Forest Park Owls: Hunting and Feeding and focuses on the owls' hunting and feeding behavior.  The talk is at 1:00pm and I am thrilled that this is the third talk I have been lucky to present this year at the Maplewood Public Library.  Huge thank yous to Dawn Yourtee, the library's program director, and the entire staff of the library for their support and help.   Here are links to the library's FAQ with directions to the library (it is both easy and tricky to get there!) and a brochure for the talk itself.  I would be honored to see you all there! 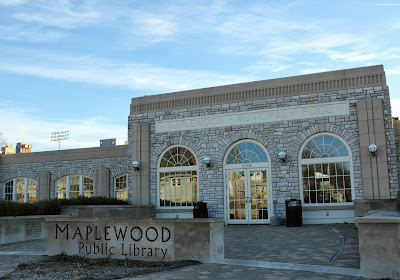 This talk will be the twelfth talk of the year.  I have another eleven scheduled before year's end. That's a lot of talking! I now have a place for upcoming talks on this blog.  On the right column you will see the next four talks listed.

Last night made it two weeks since I last saw one of this year's owlets.  A week before that I "made the call" that the owlets had all dispersed.  This year's dispersal was interesting as the owlets dispersed gradually and in age order from oldest to youngest.  I had not seen such a gradual and age ordered dispersal before this year.  At one point the youngest owlet, Stuart, was not seen for several days but then returned for a few more weeks.  Dispersal is always a bittersweet time.  I miss the owlets and wish them well on their next big step in life.  At the same time I am excited for them and happy to see Charles and Sarah have some time to themselves before, hopefully, beginning the whole process over again.  Dispersal is also vital to the owls overall well-being.  If the owlets did not disperse, the pressure on the populations of the owls' prey would be damaging.  Secondly, dispersal helps to ensure that the owls' gene population stays nice and healthy by spreading related owls out into the world.

Here is an earlier video of Stuart doing some begging cheeps that are more visible than audible.  Usually it is the opposite.

I sent the below out a couple of weeks ago to my e-mail list and to the MO-Birds listserv so it is old news for some of you. It documents what turned out to be the last day I saw one of Charles and Sarah's owlets this year, Thursday, September 12.   Thanks for reading!

After too many days, albeit days well spent, not having enough time in Forest Park, I was able to spend a few hours there last night checking out the Great Horned Owls and other cool critters.

My first sighting was of a immature Cooper's Hawk flying right above me with prey in its talons.  I saw where it landed and watched it adjust its position while begging to pluck the unidentified bird it had caught.  I took my eyes off for a moment and it was gone in a flash.

After a Muskrat sighting I was continued looking for the owls when I heard a loud bird call.  It sounded, as I said at the time, "perhaps like a Pileated Woodpecker or a Northern Flicker on steroids."  I was wrong it was the immature Cooper's Hawk and he was calling at an immature Great Horned Owl.  It was Stuart, the last of the 2013 owlets to disperse (also the last to fledge). The owl and the hawk took turns facing each other and then flying at/attacking each other. It was interesting to see these two immature birds exhibiting this behavior.  What the owl lacked in agility in speed it made up for in size and power. Over the years I have seen numerous interactions of these two species including vigorous mobbing of the owls by the hawks and predatory attempts on the hawks by the owls.  These interactions are always intense and fascinating.

I lost sight of the mutually inhospitable immature individuals but I soon found Charles, the adult male GHO.  He engaged in intensive grooming and stretching while bathed in the setting sun before beginning to hoot in earnest. The adult female,  Sarah,  soon made her presence known and joined him for a duet, which they then took on the road for a while.  They each made a unsuccessful predatory attempt on bats in midair. Despite the lack of success, these attempts were thrilling as always to see.  I have observed the owls catching 5+ bats in the time I have been watching them.