Adventures In Owl Dining, Part I

In less than a week it has been my luck to have two amazing nights of Sarah feeding herself and the owlets. The first night was Saturday, April 12.  I met my friends and owl mentees Brenda Hente, Barb Brownell and Chris Gerli and we headed over to see the owls. We found Sarah high up in The Overlook Hotel Tree. From about forty yards away I spied with my little eye all three owlets in a row in The Jungle Gym Tree Near The Archy Tree; a favorite haunt of theirs in this post-fledging stage this year.  (Be sure to double click on the photos to see a larger version of them) 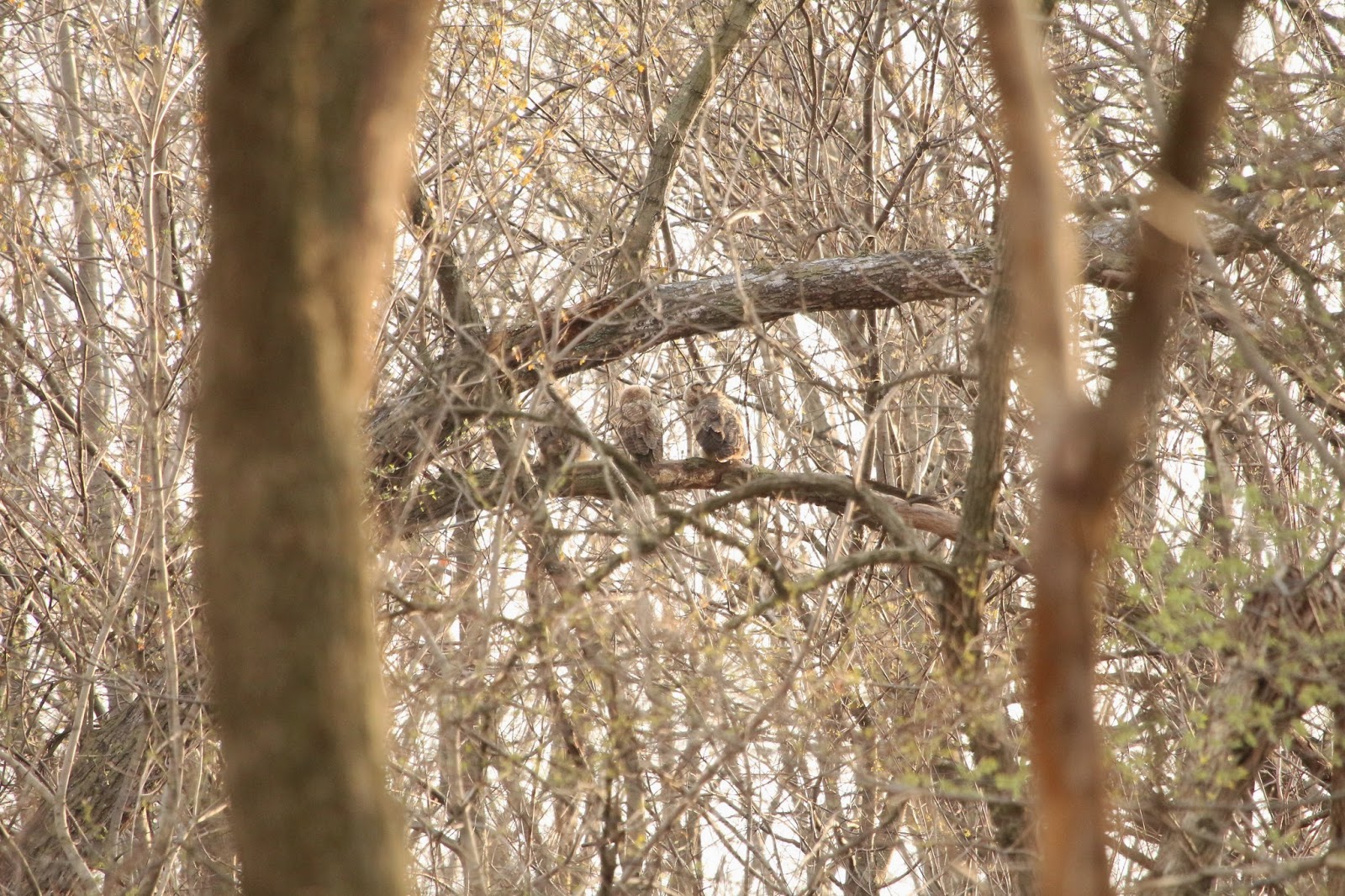 After a quick stop to find Charles in the tallest of The Trio Conifers we headed back to watch the owlets from a closer angle.  Chris saw that Sarah had joined the owlets in their tree.  We saw her move into a crotch in this multi-faceted tree and we wondered if she was removing prey from a cache site.  Indeed she was. She made a short hop over to The Jungle Gym Tree Near The North-South Path landing on a bare branch with the remains of large greyish/darkish bird in her massive talons.  She wasted no time in feeding. We wondered what it was and American Crow, Little Blue Heron, and Cooper's Hawk promptly came to my mind as likely candidates.  It was amazing to see her take large bites of this bird with feathers of her prey sticking out of her bill as the setting sun bathed her in light. 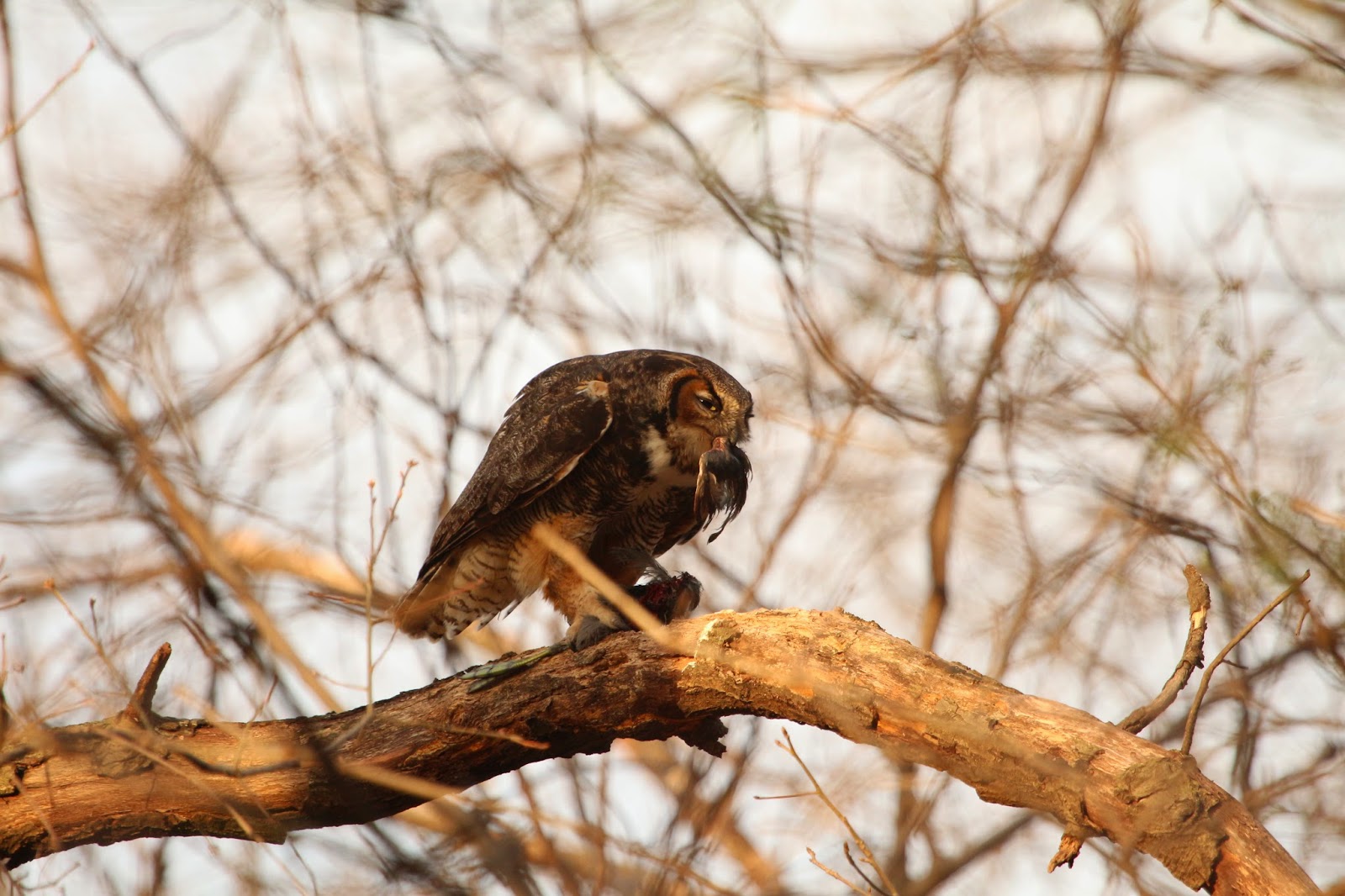 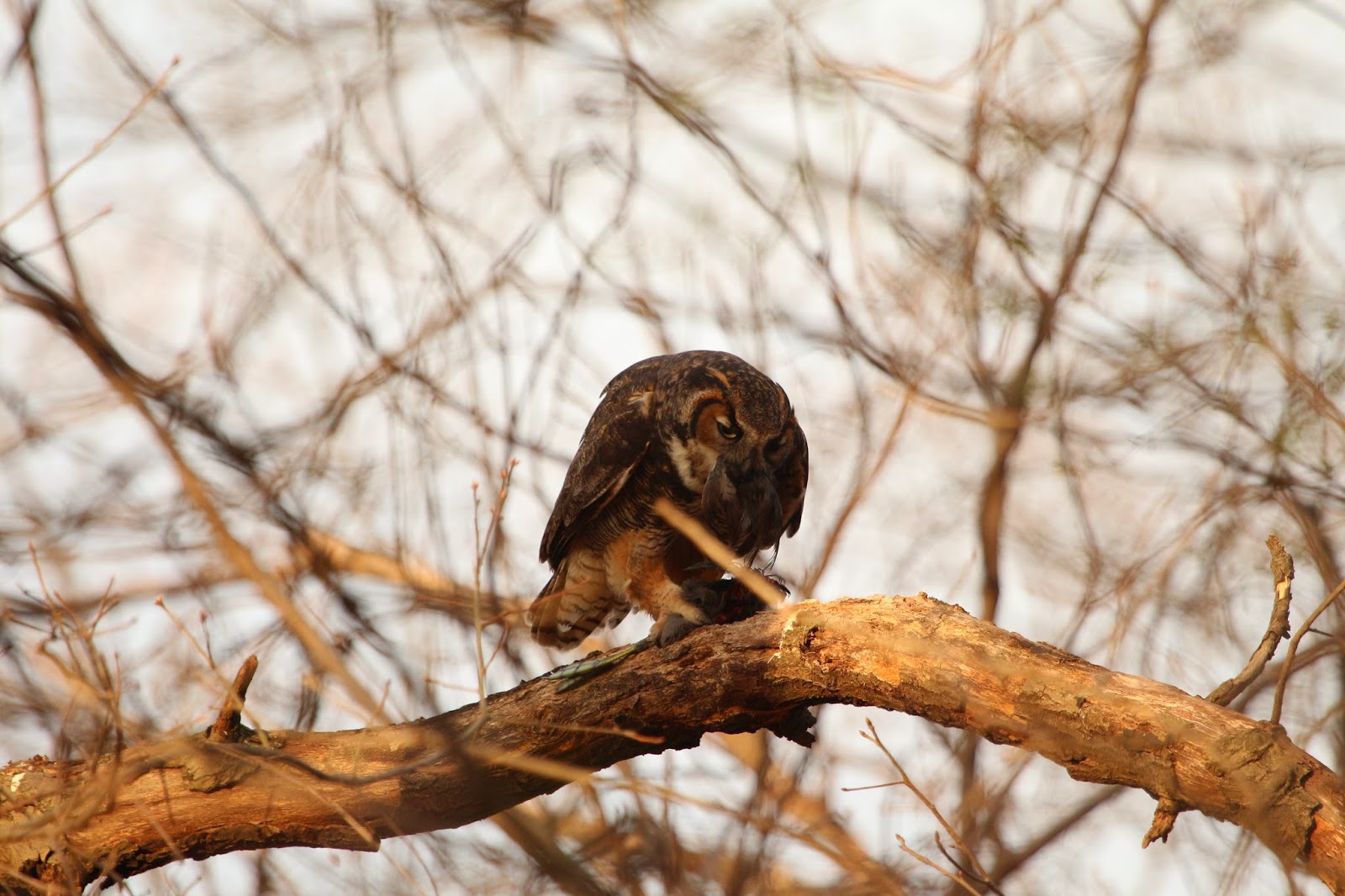 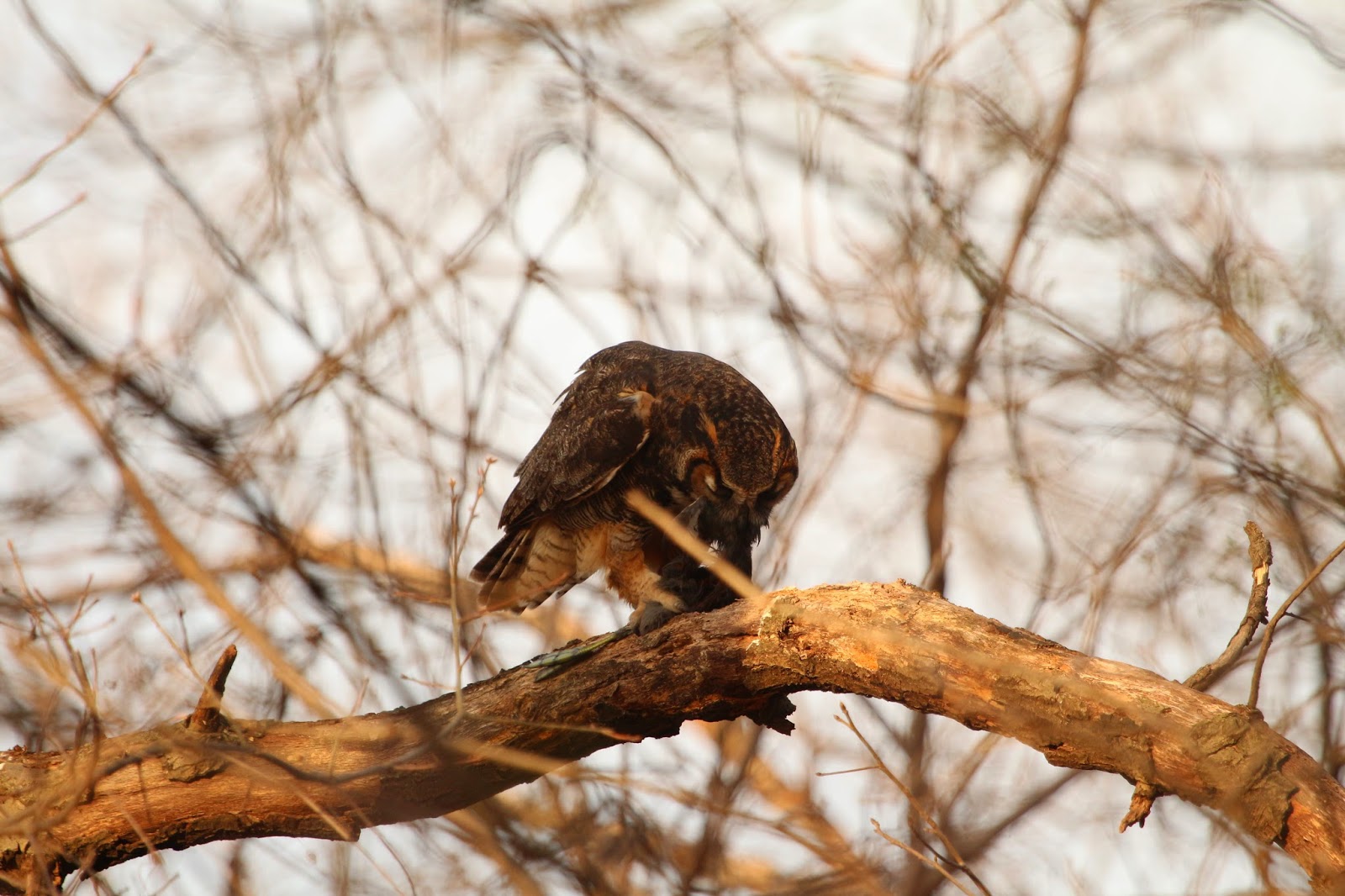 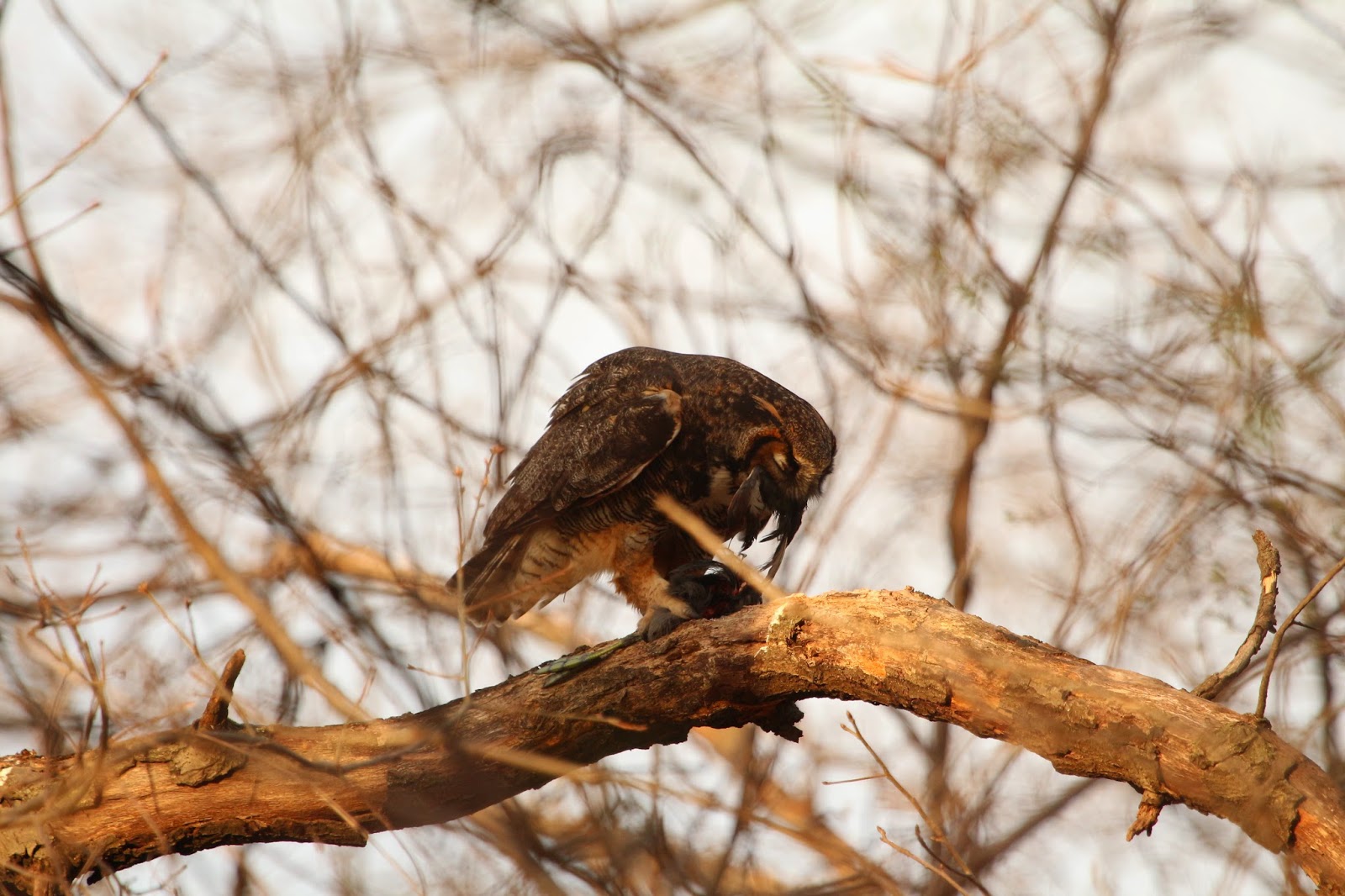 I only took one video of her and the focus was a tad off so my apologies for that.  Still it gives some insight into her feeding.

She paused in feeding and I was able to get a clearer glimpse of the prey.  These photos are cropped in order to see the prey more closely. 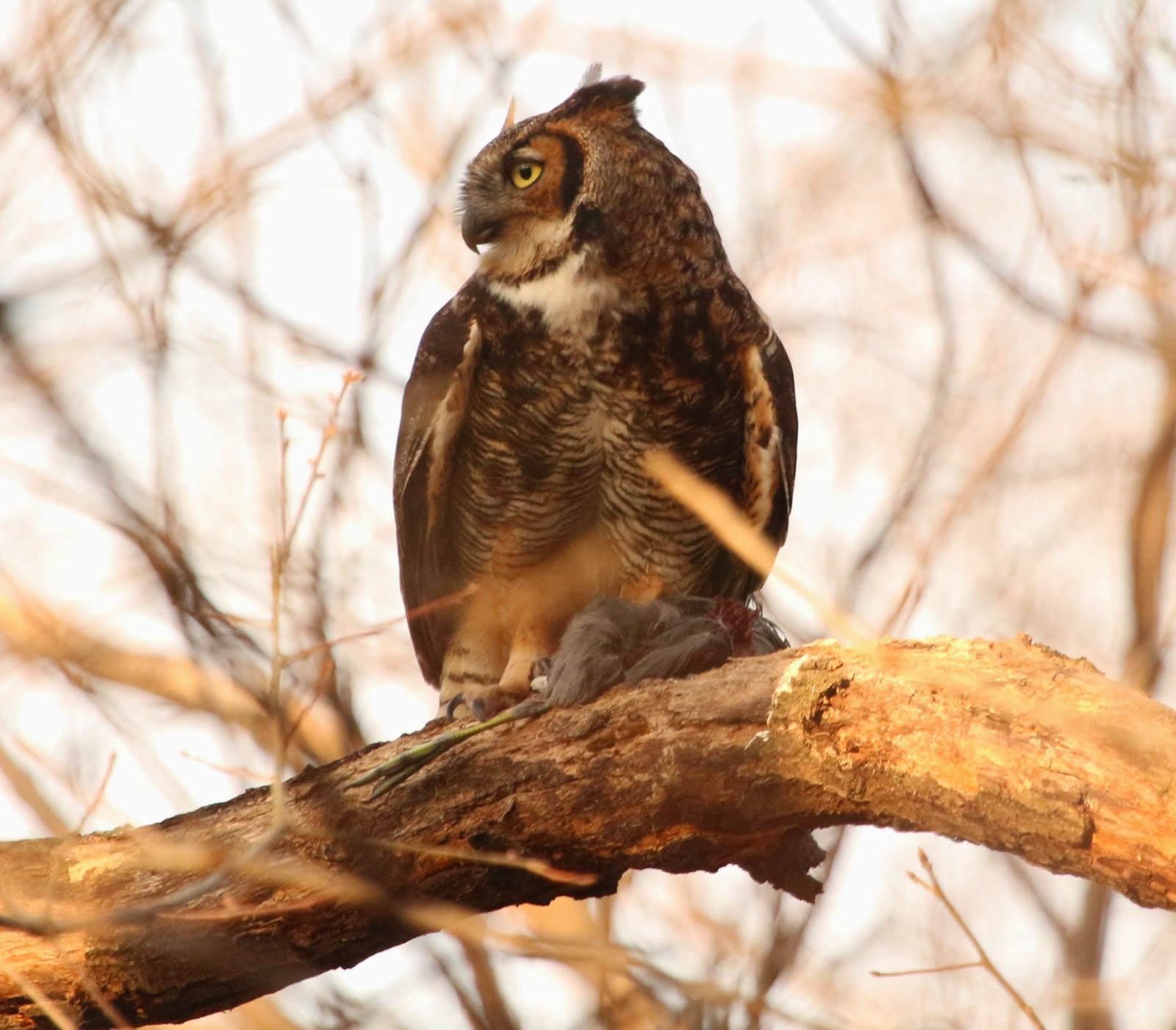 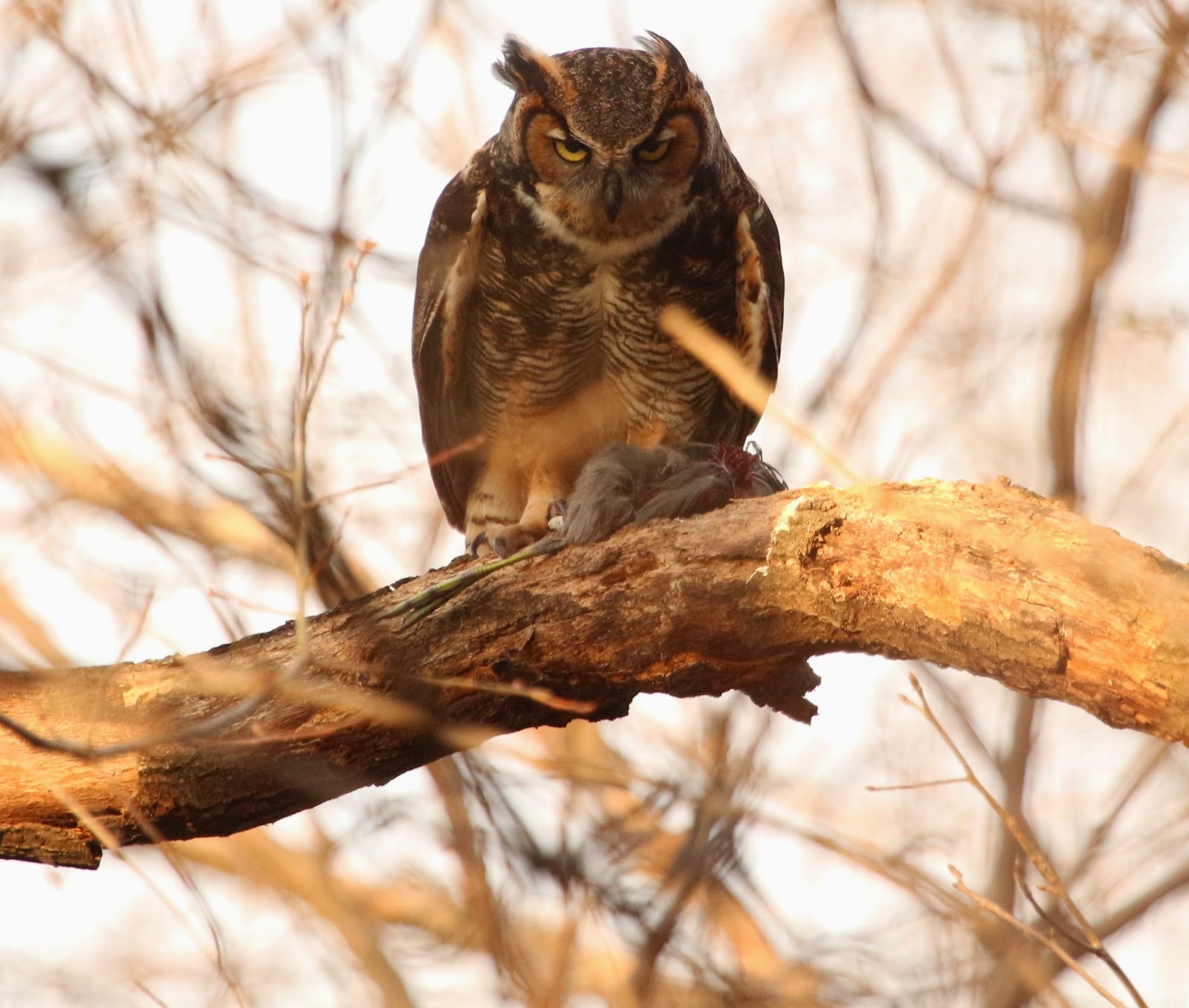 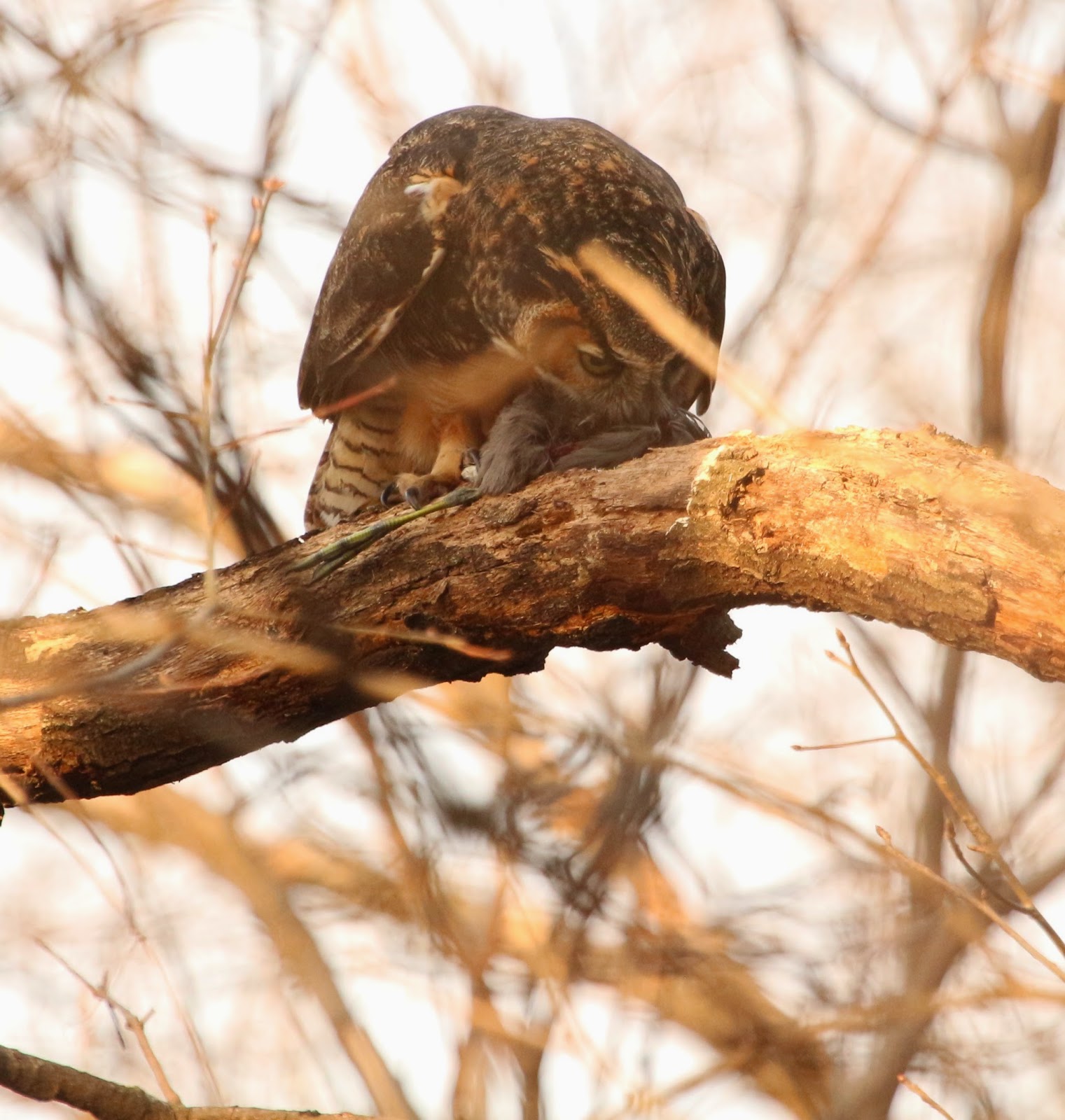 When our night ended, I looked closely at these photos and showed them to everyone on my camera. I was pretty certain it was a Little Blue Heron given the size of the bird and its blue-grey feathers and long green-brown legs.  My friends and mentees were not as convinced just yet. Chris and Brenda thought that they saw some barring or striping that would have ruled out a Little Blue Heron.  A few days later I sent Brenda the above cropped photos and she concurred that it was a Little Blue Heron.  She showed it to her one of her students, Jacob Meyr, a superb birder, and he too agreed with my identification.

The day before this, Friday, April 11, I saw a Little Blue Heron flying through the owls' territory.  Of the various herons and egrets that are seen in Forest Park, it is one of the most uncommon species.  The last one I had seen was at least two years ago.  I do not know if the one that Sarah was eating was the one I had just seen the day before but I wished I had seen the actual predatory attempt and learned which owl had caught it.  A Little Blue Heron, at 24 inches tall, is in the same size class as a Great Horned Owl.  Just one of many examples of the predatory prowess of these owls.

Now that Sarah was fortified she hopped back over to the owlets and began to feed them. 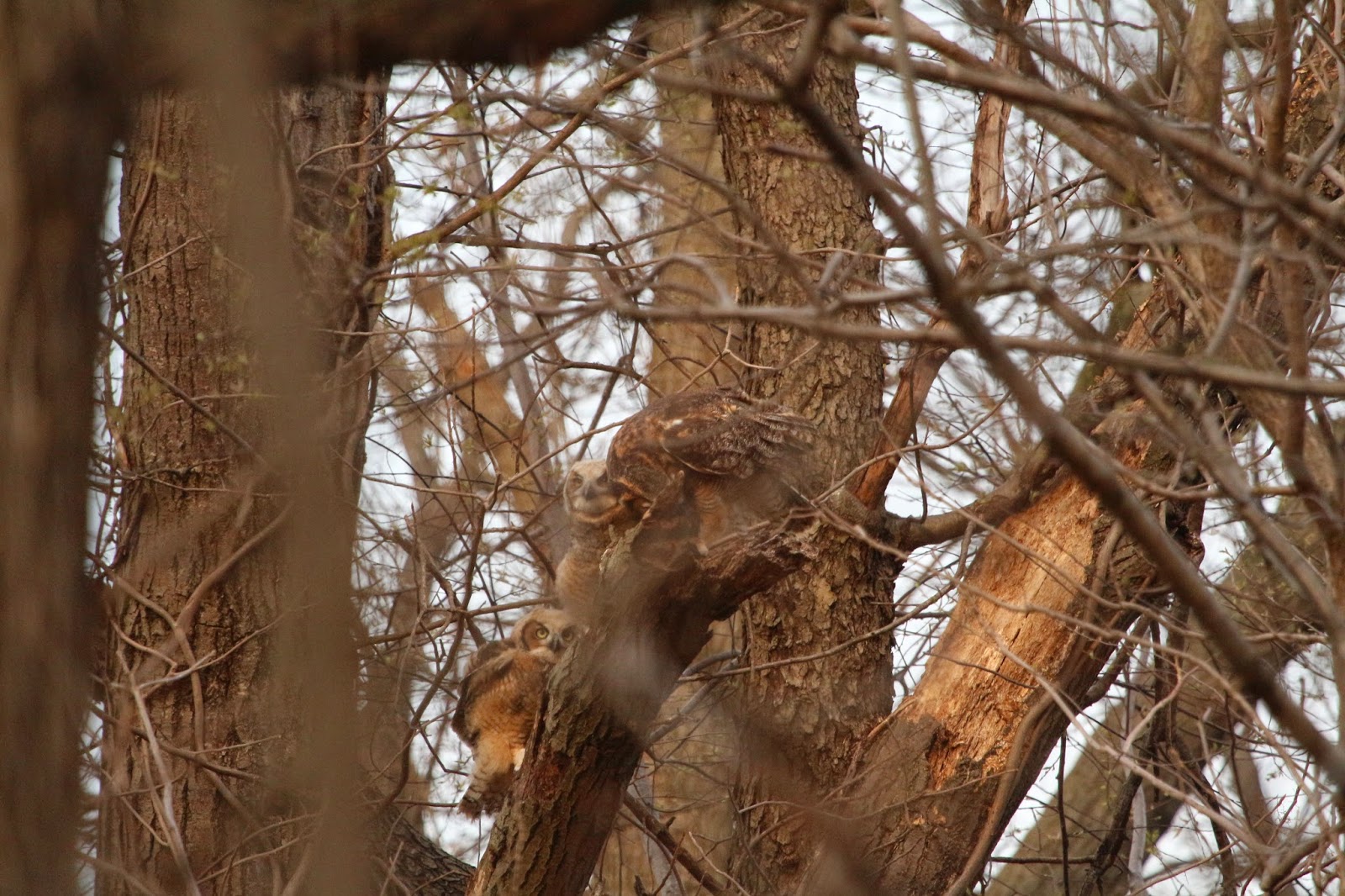 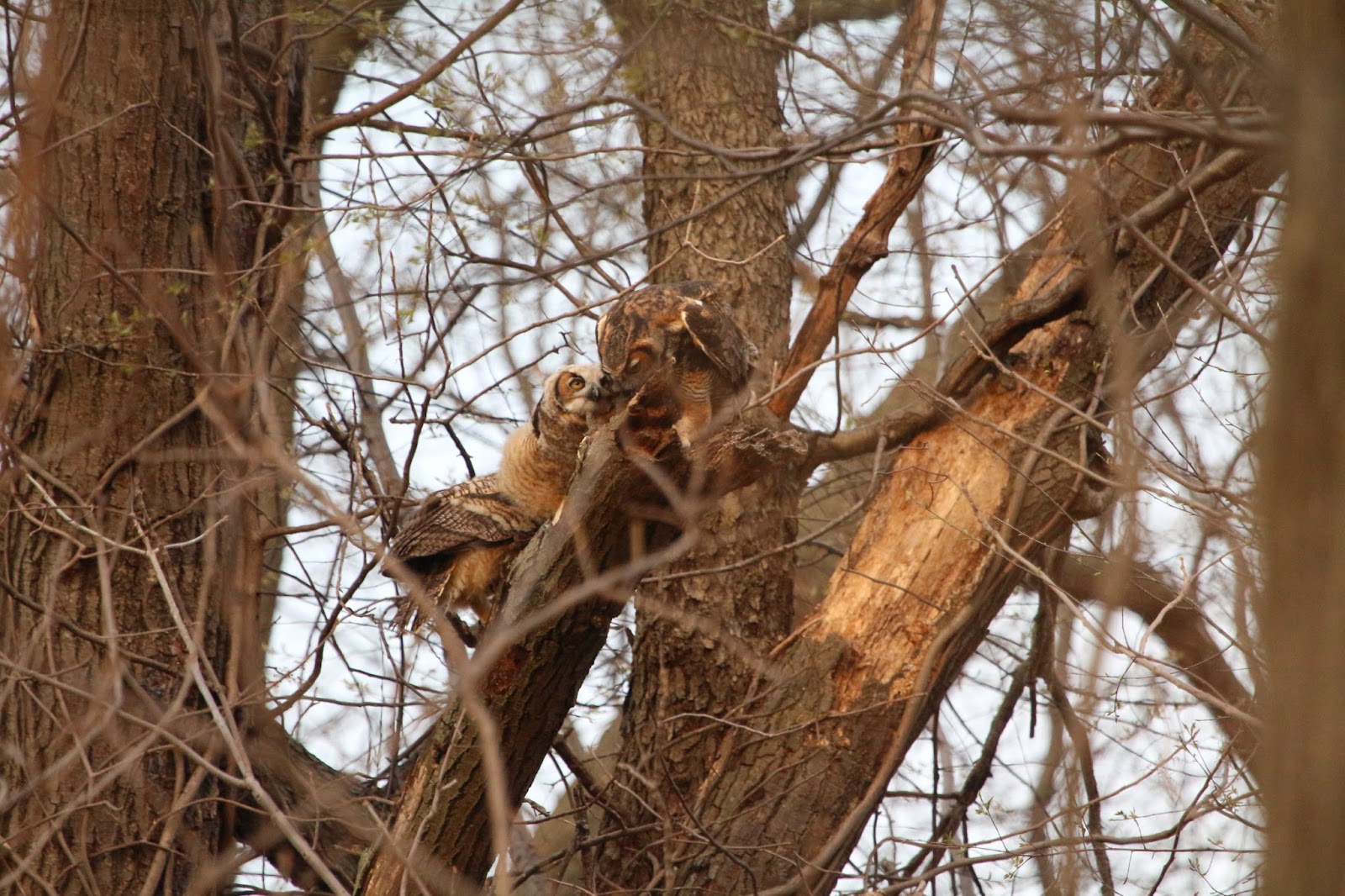 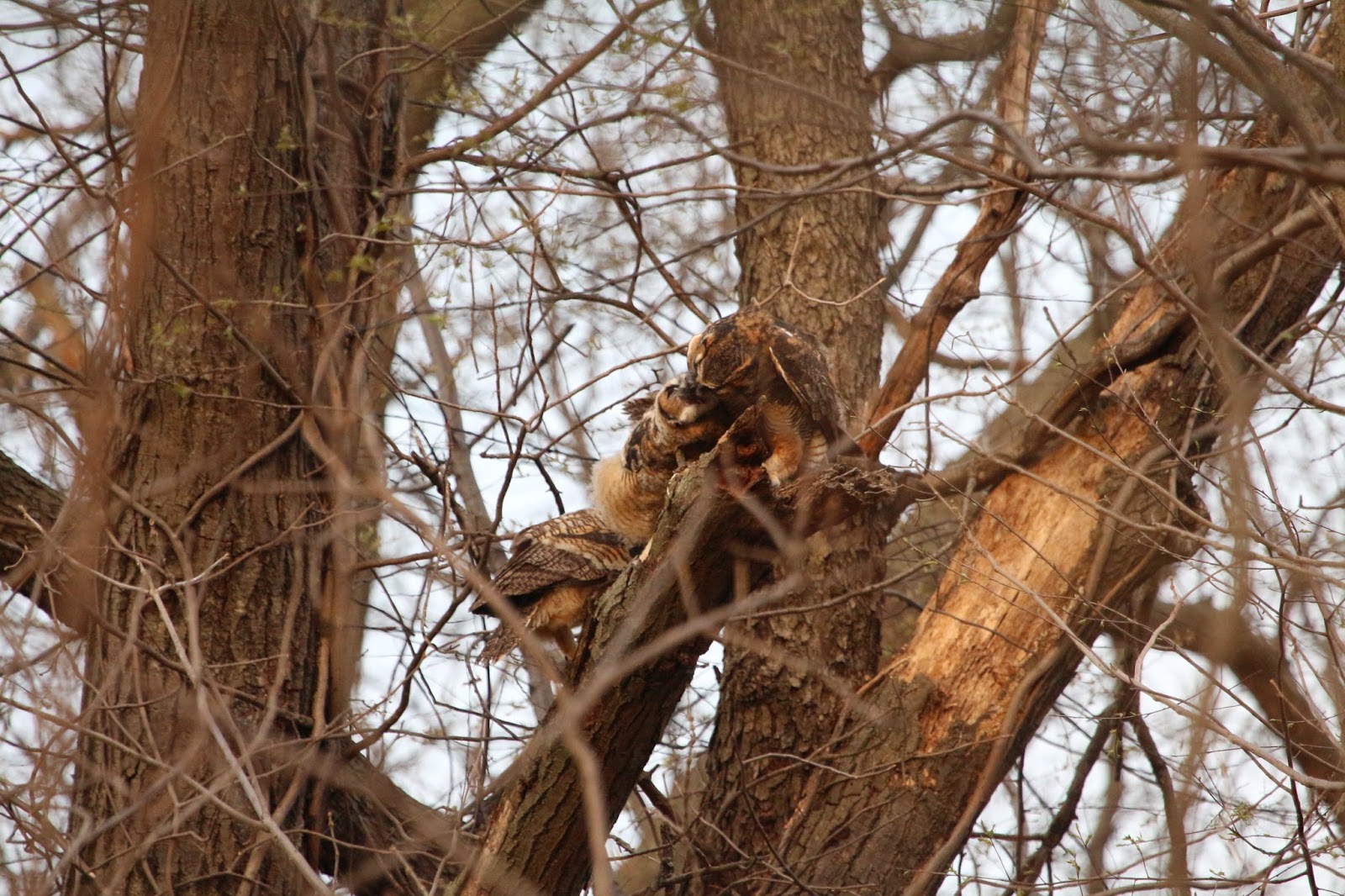 The owlets moved around a fair amount and at one point instead of flying to Sarah's right, one of the owlets flew to her left and got fed. 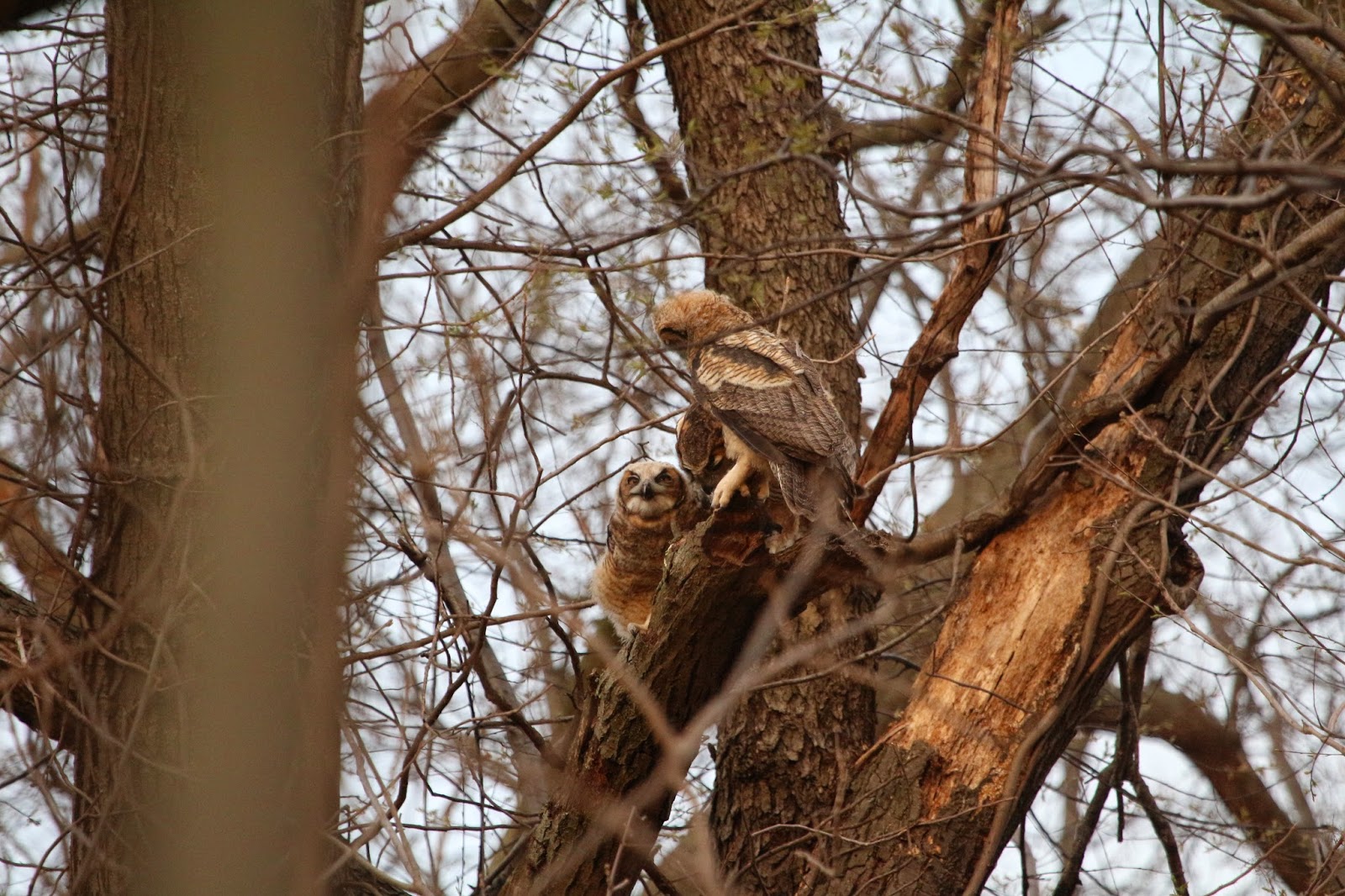 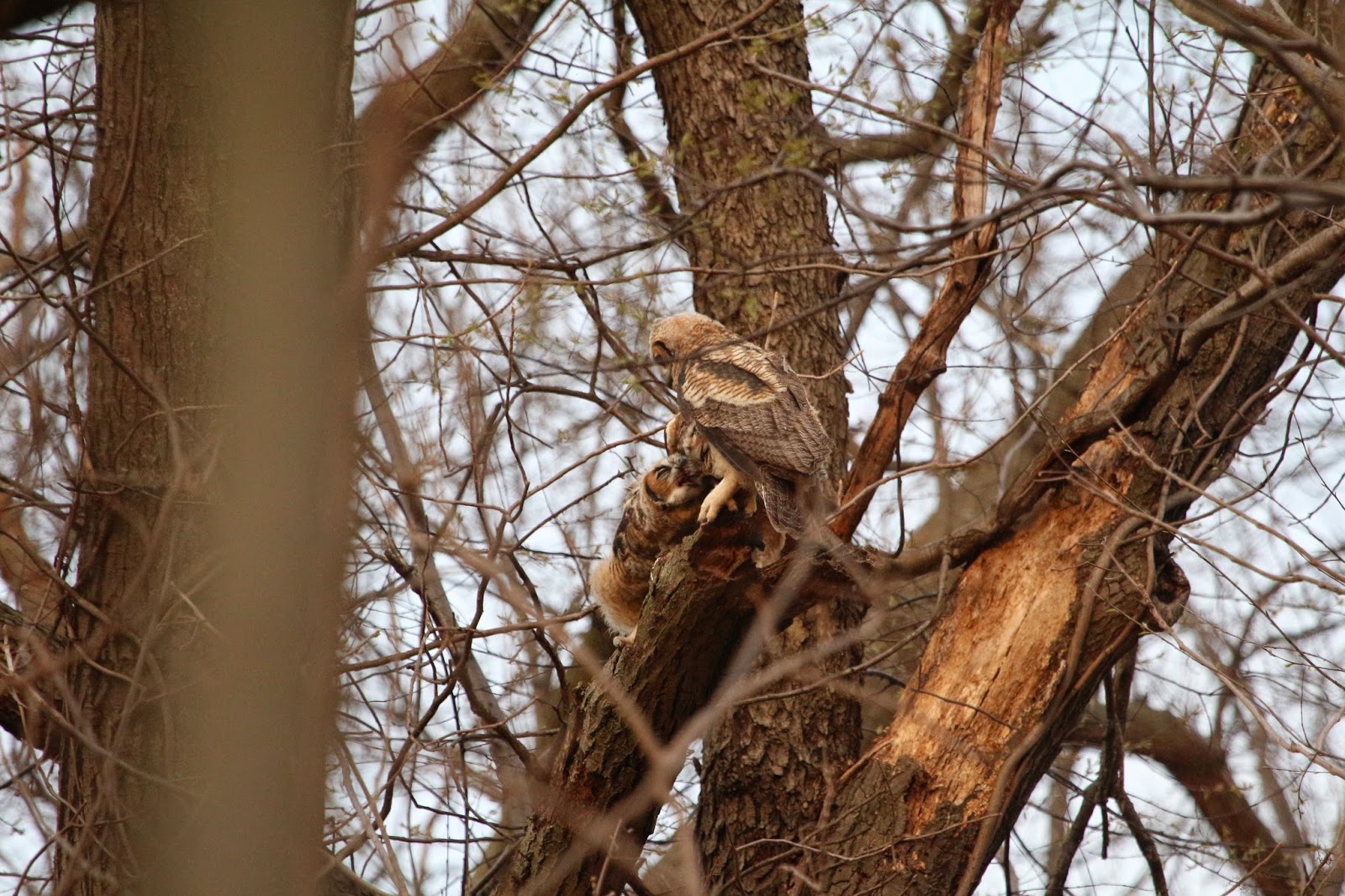 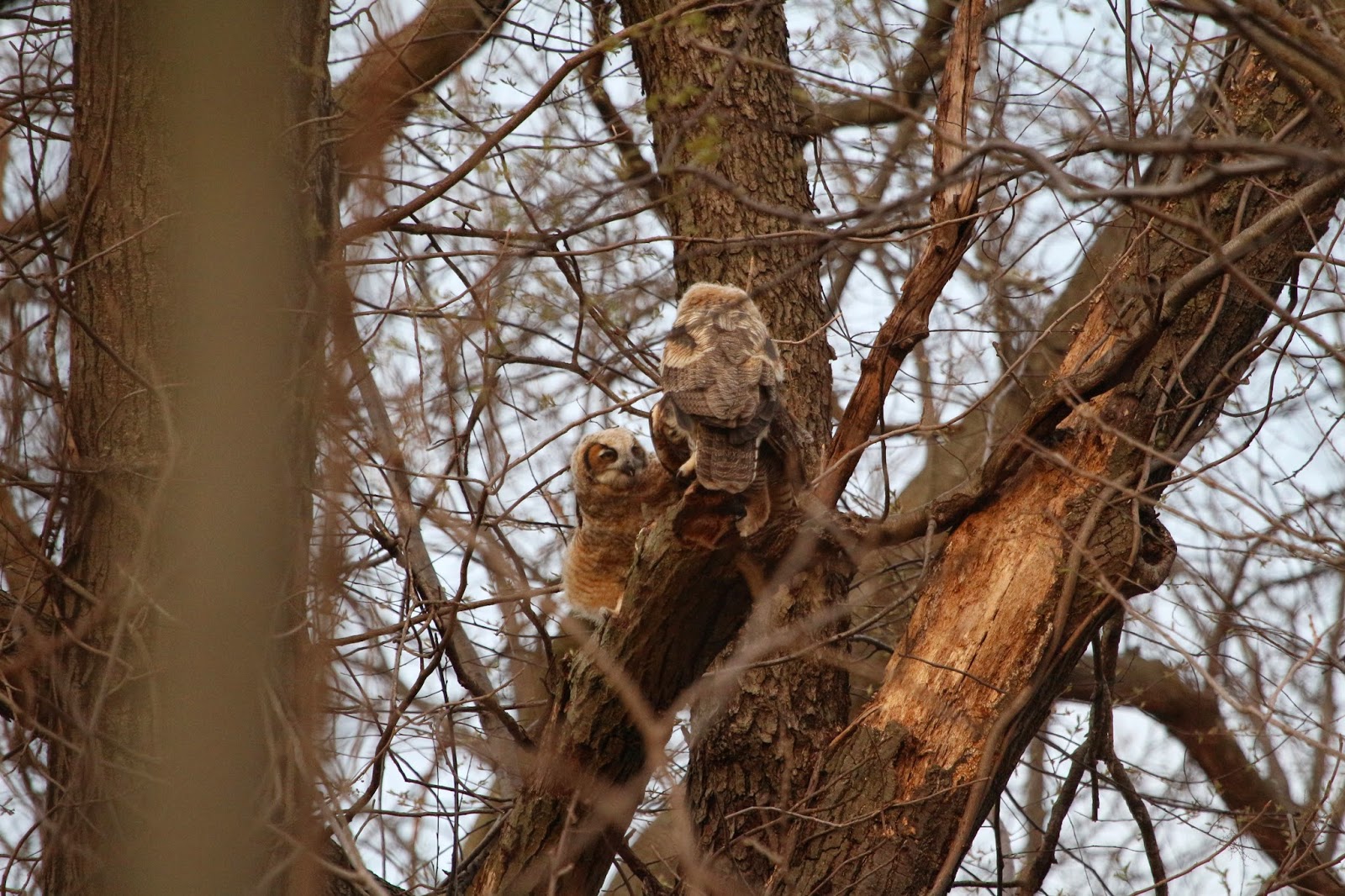 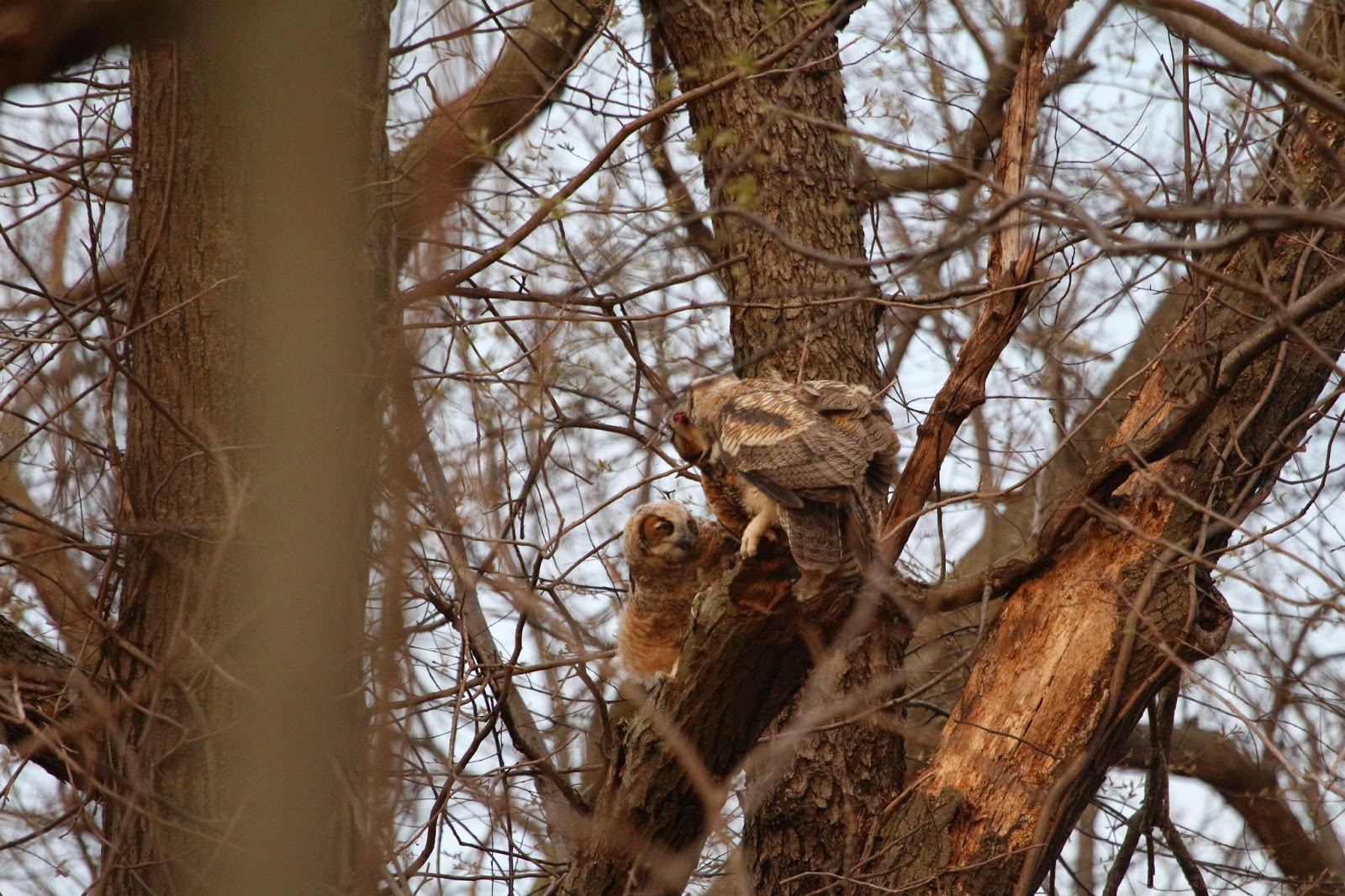 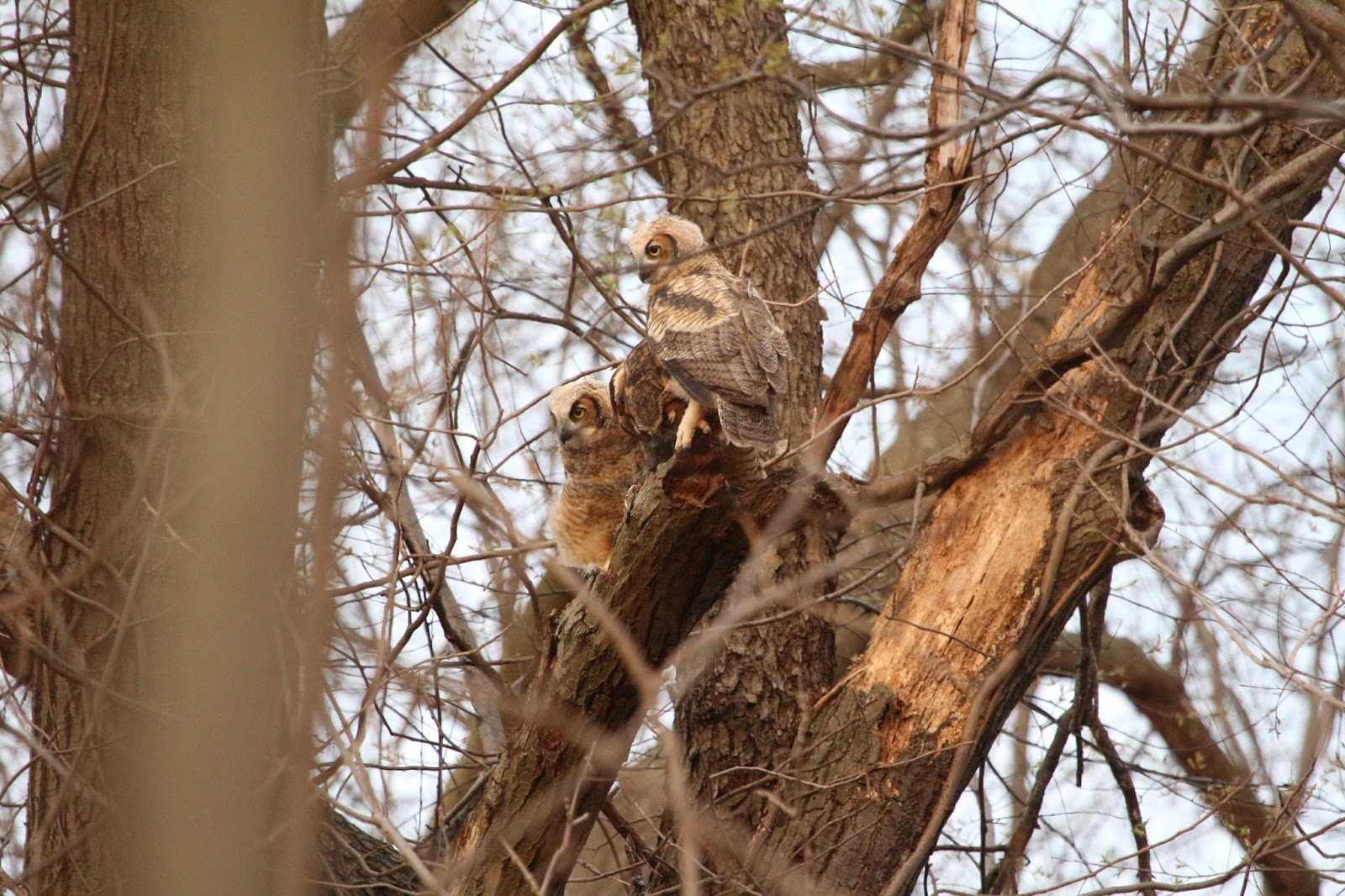 Sarah fed the owlets on either side of her and then left much of the prey for the owlets to eat on their own. 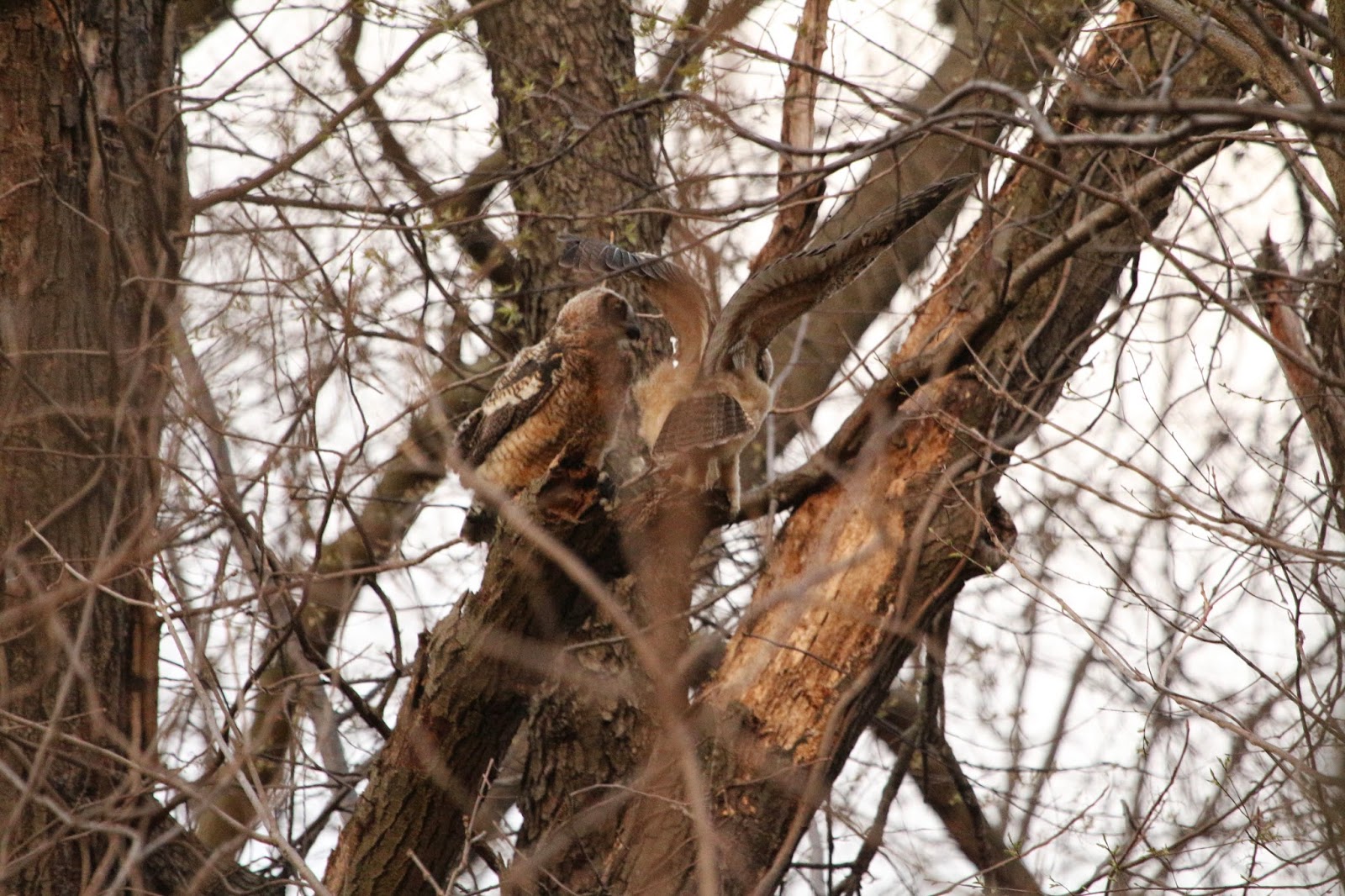 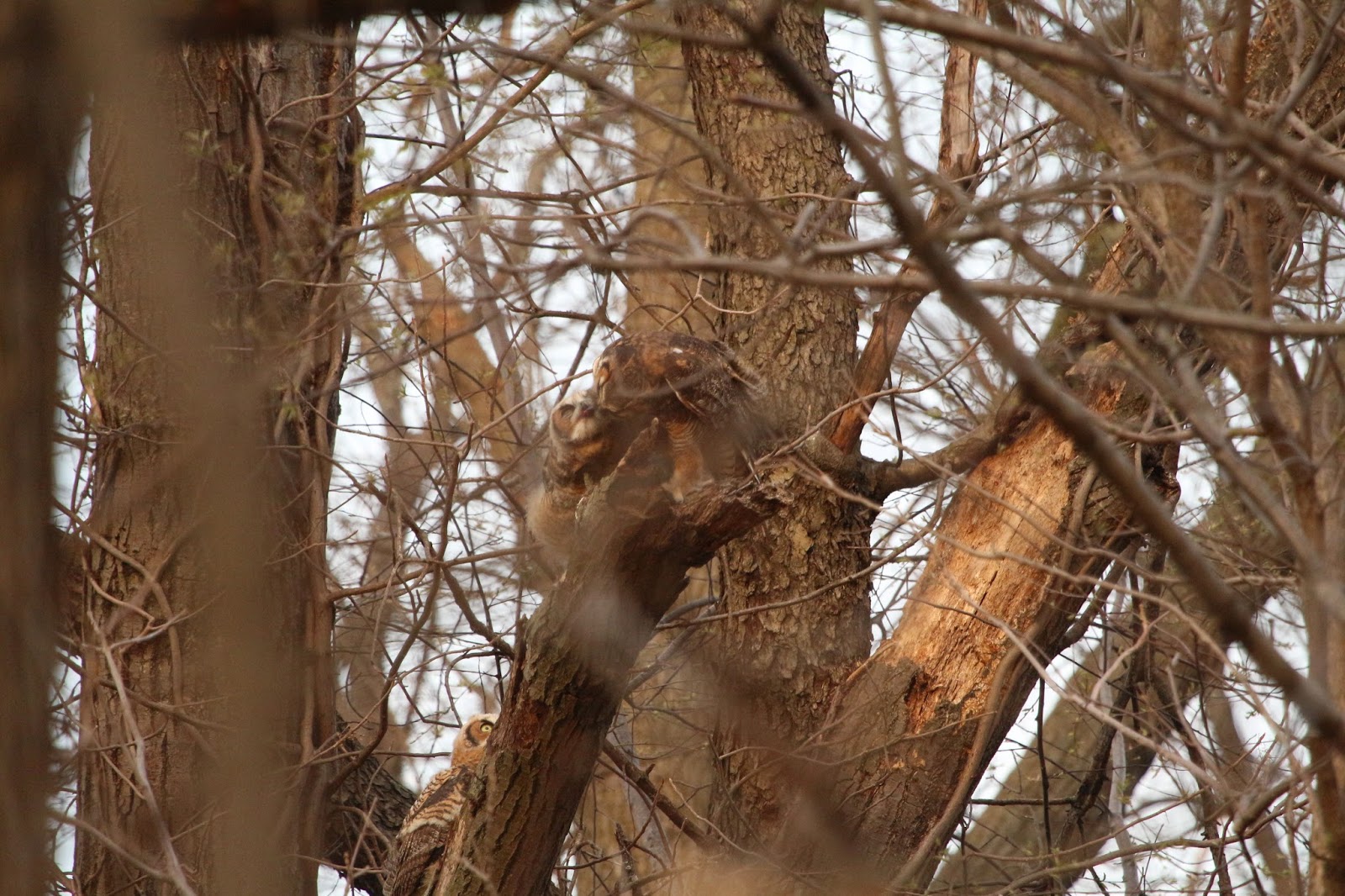 She flew off and the owlets remained. While this was all going on, Charles flew to the northern edge of The Wooded Area.  Eager to get a closer, longer look at Charles, Chris went around and watched him fly further north.  Chris followed Charles and we kept in touch, relaying our observations and updates via our phones.

Brenda, Barb and I delighted in watching the owlets move around and it was great to see them end up all together again in the same branch before we left for the night. 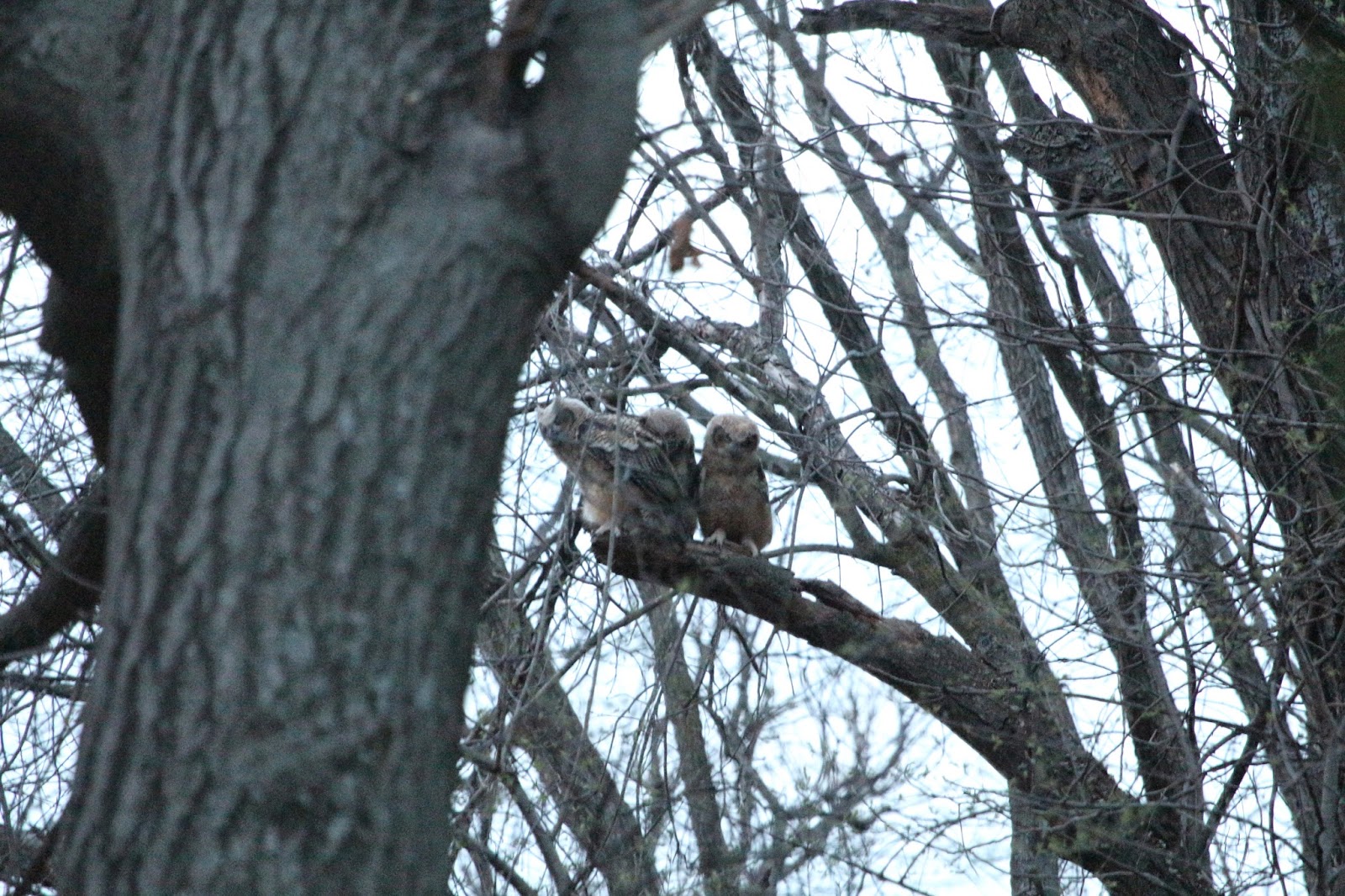 Thank you for reading and look for Part II soon!
Posted by Mark at 12:52 PM