An Illuminating Afternoon With The Owls

It is always great to observe the owls but on some days the purely visual part of observation stands out more than others.  Sunday, March 22 was such a day.  When I arrived at the park, there was a thin layer of cloud over the otherwise sunny sky.  I had a great time checking out the wildlife in and around the Steinberg Prairie area and the Fish Hatchery ponds.  Highlights including my second and third sightings of frogs (American Bullfrogs) in 2015, many Red-eared Sliders (the most common turtle species in Forest Park) and Hooded Mergansers.

Early in my walk I ran into my friend and owl mentee, Brenda Hente, who was walking her dog, the ever-happy Pumpkin.  Brenda called me later to tell me that she had found Charles and that I would greatly enjoy where he was perched.  I thanked her for the heads up and headed over to the owls' territory.  I soon found Charles perched in a nook of The First of Three Trees completely unobstructed.  By now the clouds had dissipated and the afternoon sun bathed him in amazing light.  [Be sure to double click on the photos to see a larger version] 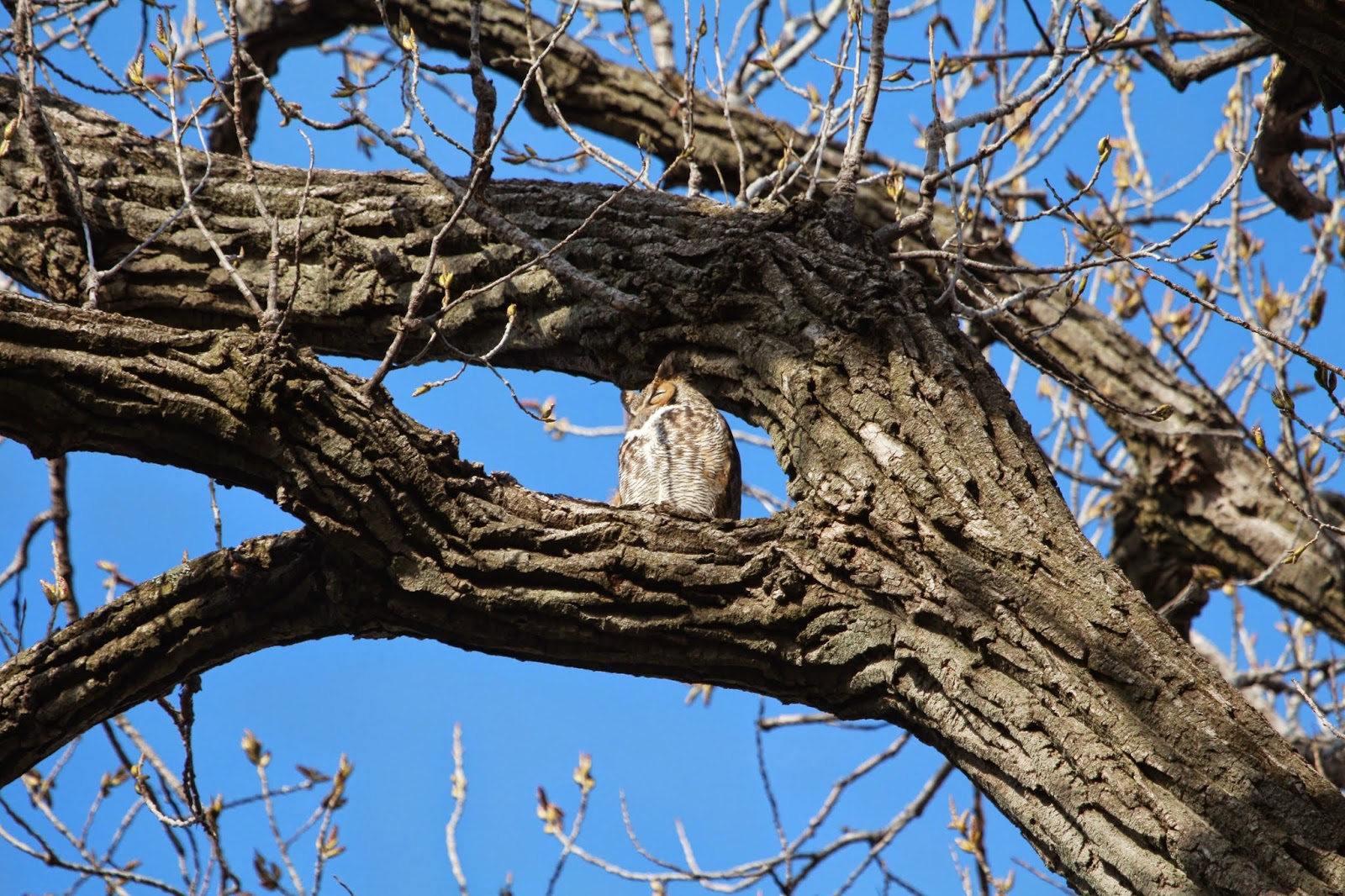 One of the owlets was quite visible in the nest but the other was not in view. 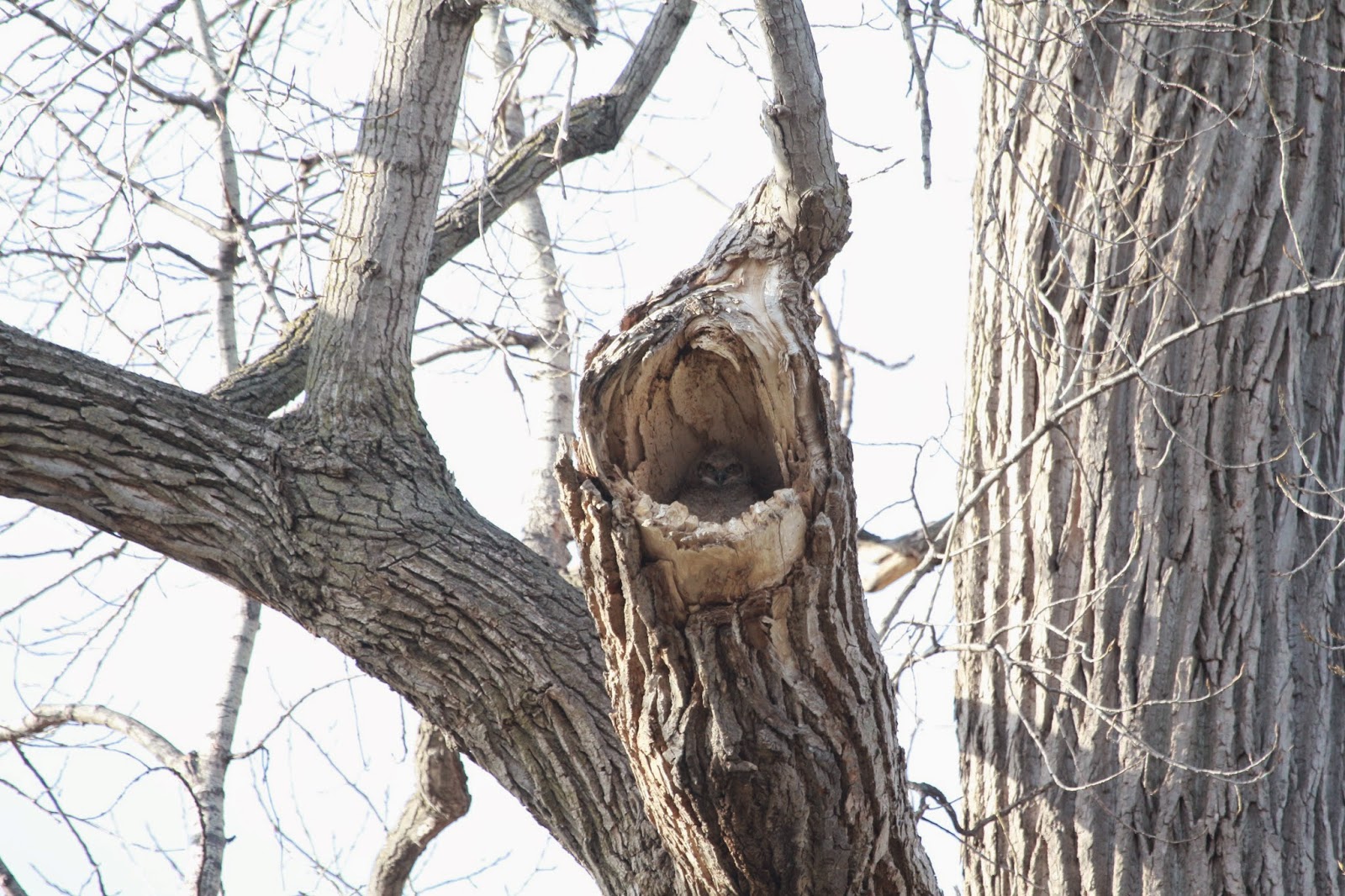 I looked for a while for Sarah before finding her in the same tree as Charles.  I saw her initially from a spot further away from where I had found Charles.  She was about fifteen-twenty feet above him and in her own nook and also with an unobstructed view. 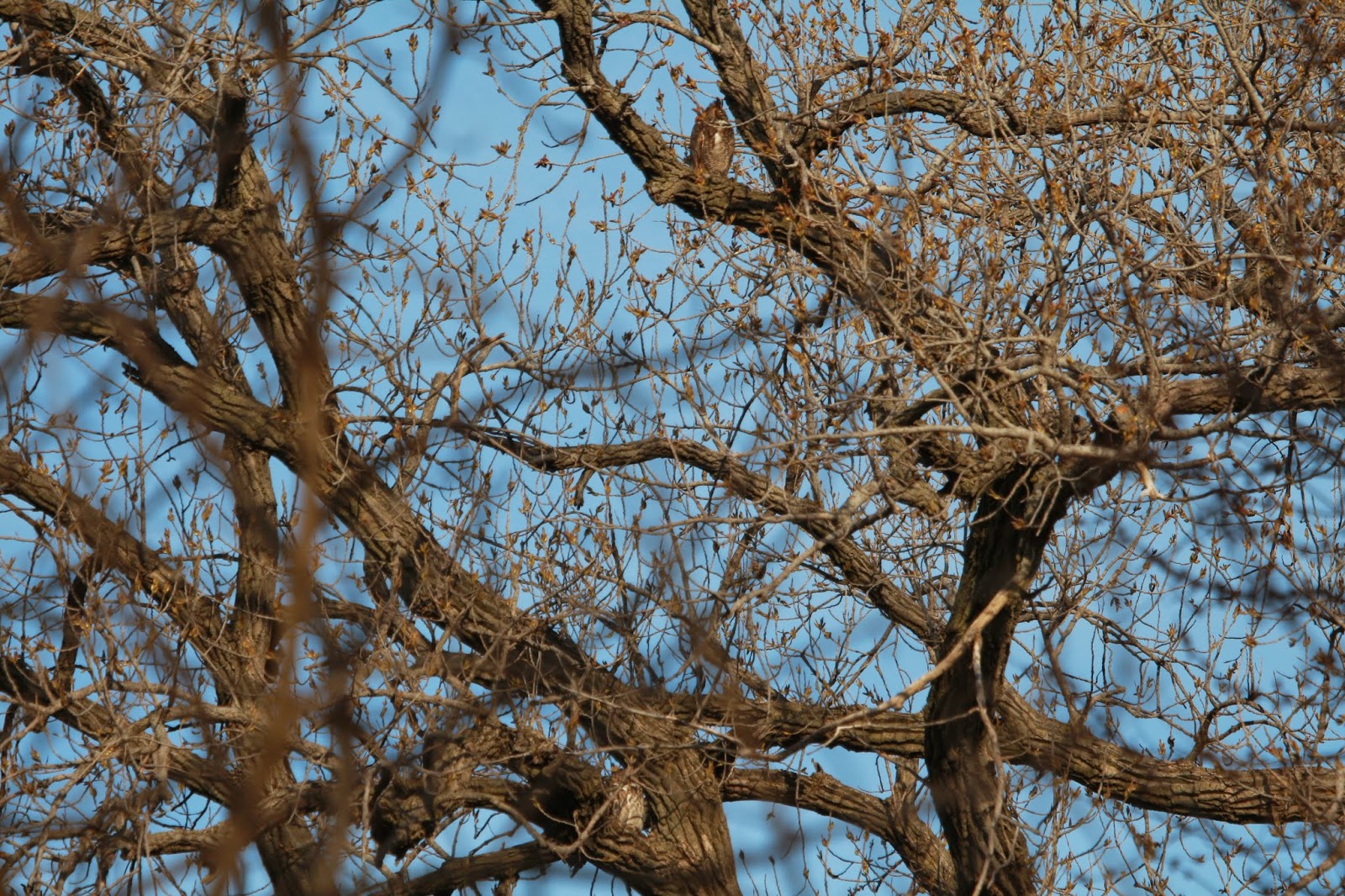 I went over for a closer look at her in the amazing light. 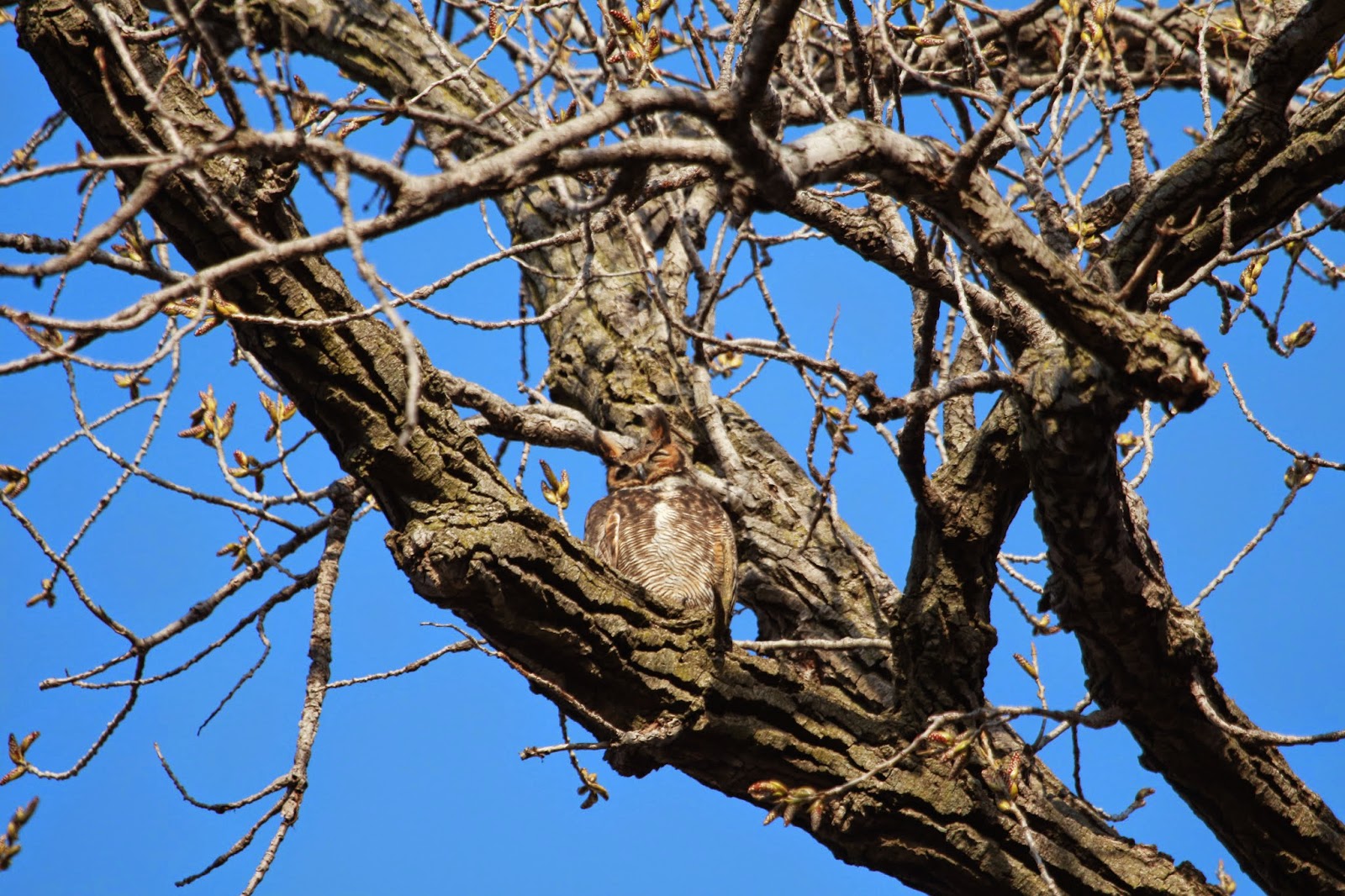 I followed this with a closer look at the two of them in their respective nooks.  I do not regularly see Charles and Sarah perched in the same tree, be they right next to each other or some distance apart, so it was great to see them and in this splendid light. 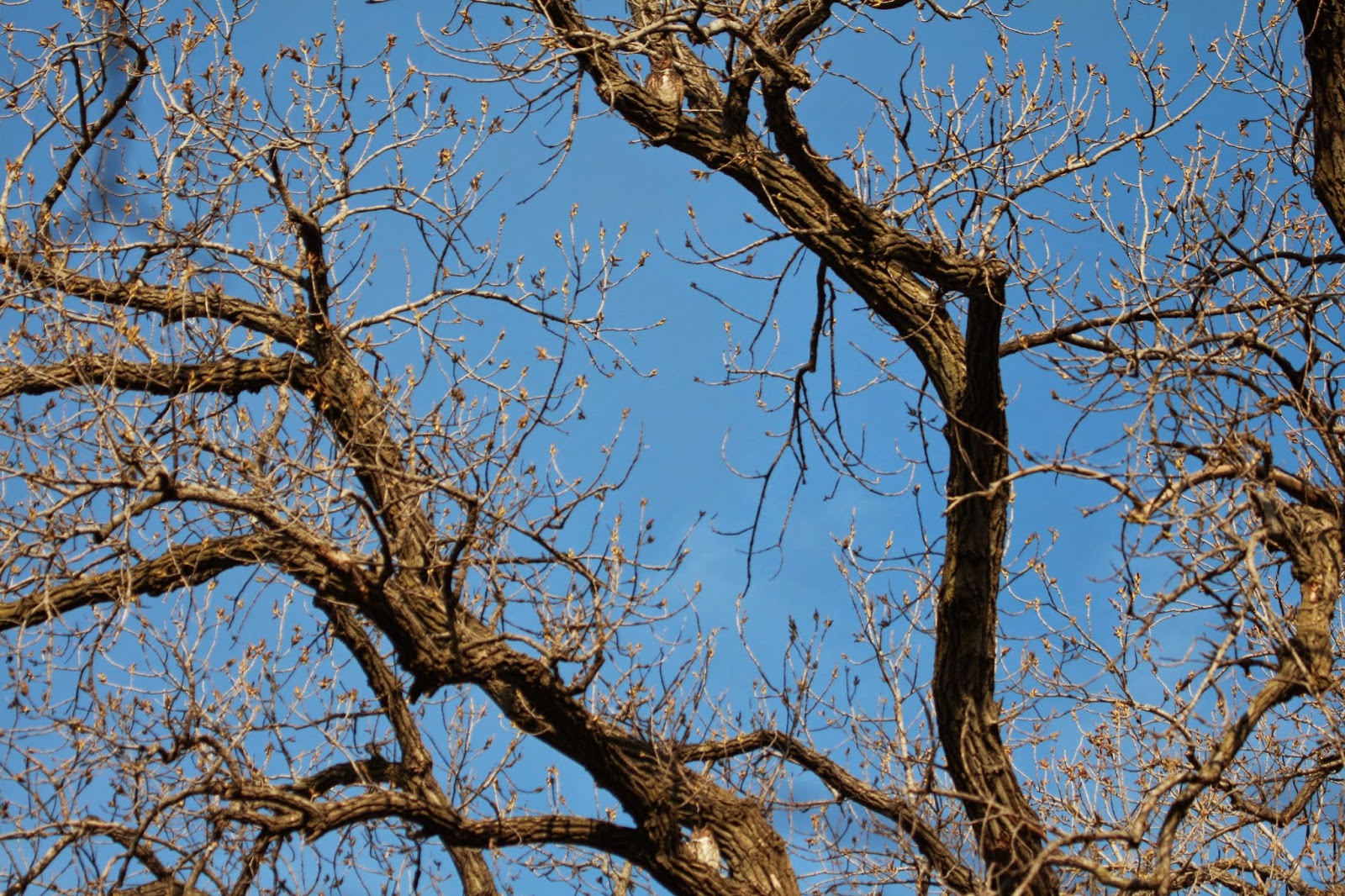 The Three Trees are Cottonwoods, which develop and subsequently drop their leaves earlier than many deciduous tree species.  In the last few days these Cottonwoods have begun to bud out rapidly as you can see. 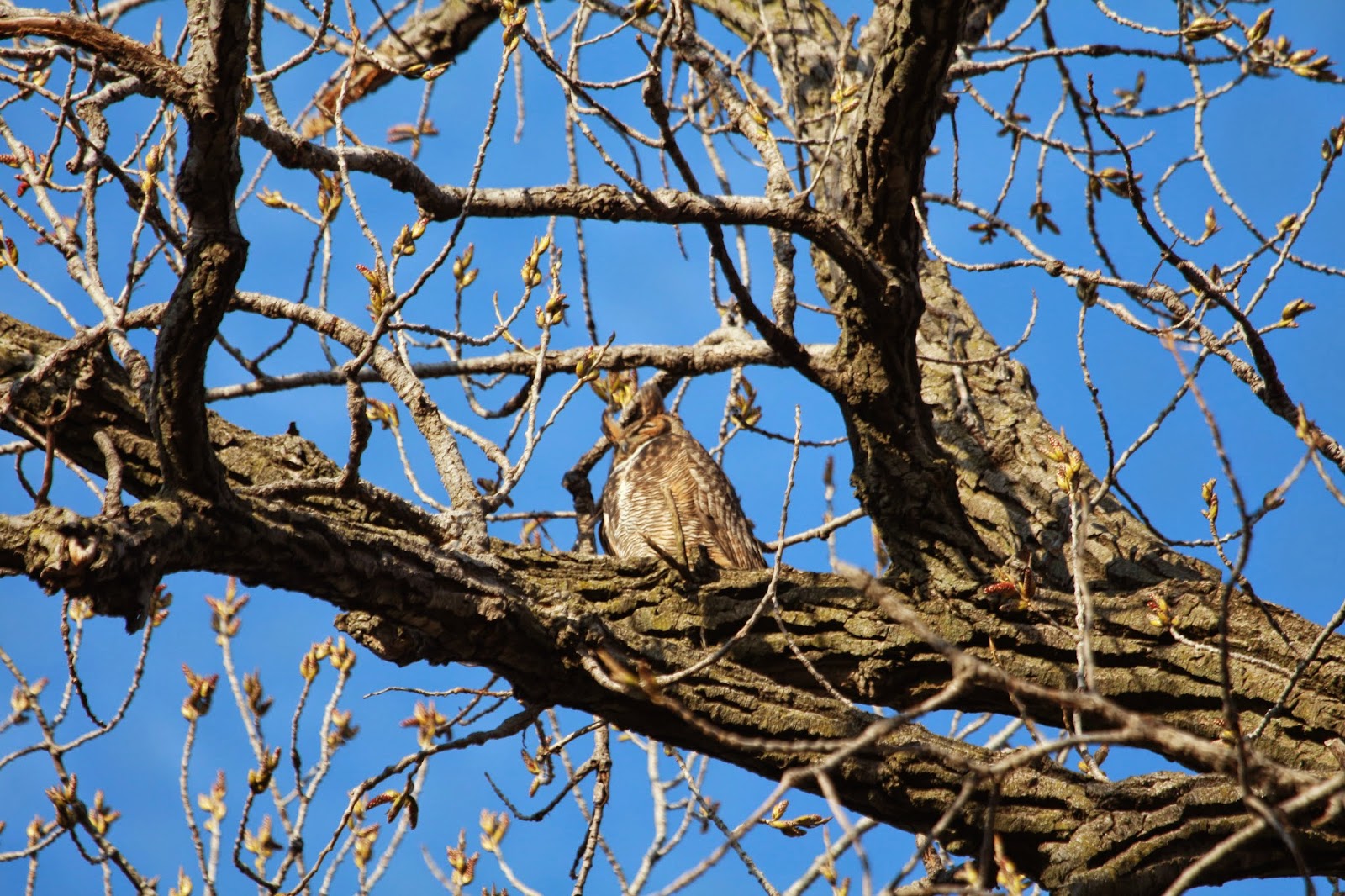 Charles hopped down to a lower branch and began to groom. 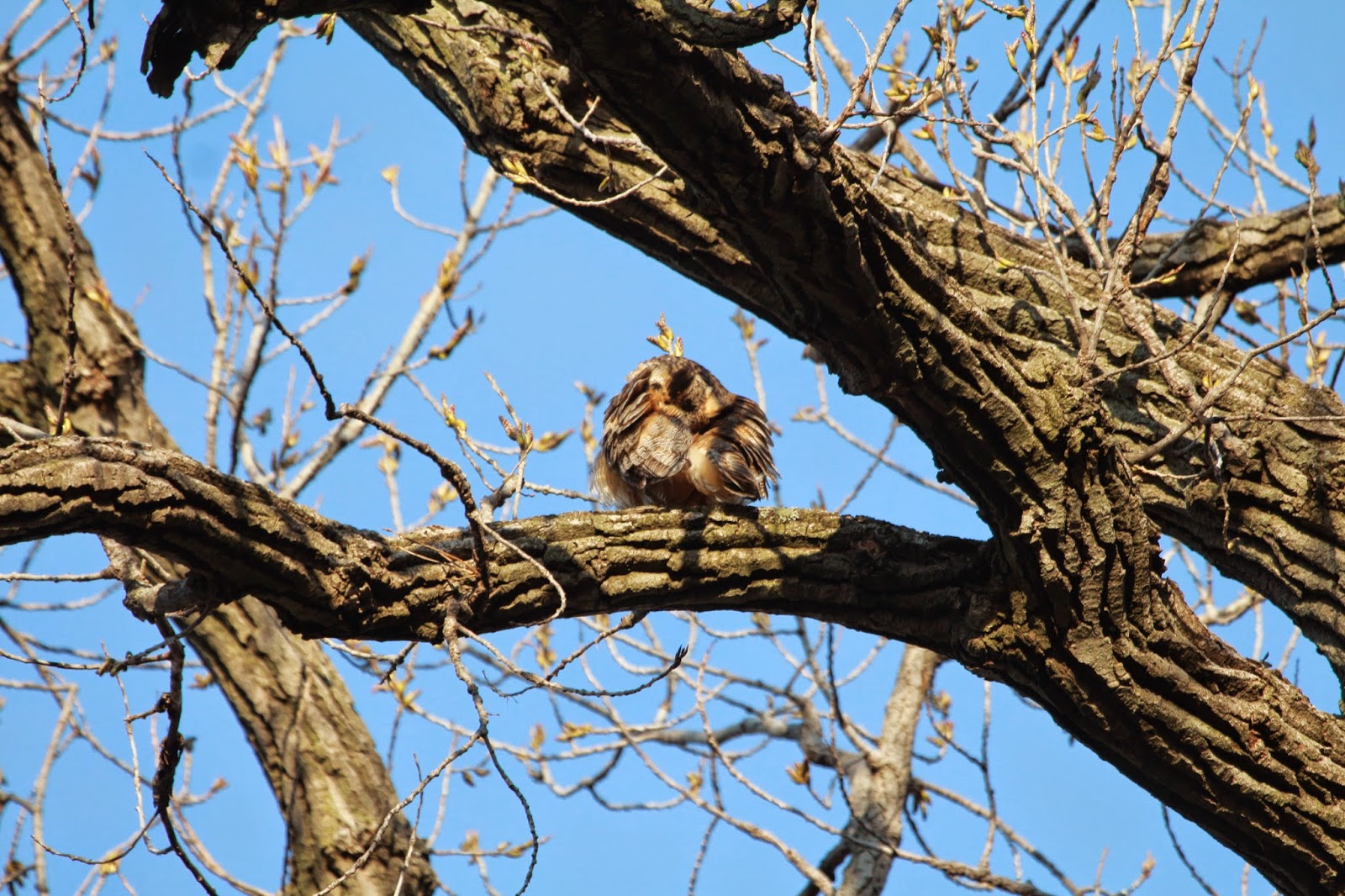 Laurie and Dave, who have been on a few Forest Park Beginner Birder Walks, were out for a bike ride and they swung by to see the owls.  They were later joined by Richard and Jane, owl devotees of several years running, and then by very recent owl prowlers, Sharon McClinton and her friend Brek who brought Sharon's husband.  It was great to see both new and seasoned owl observers return to the park to feed their love for and interest in the owls. Everyone delighted in seeing Charles and Sarah in their well-illuminated perches.

Both owlets soon came into view, The nest is so deep and dark that you have to overexpose just to get a decent look at them.  Not the easiet spot for observation photos but a great spot for nesting.  I think that the latter is much more important than the former. 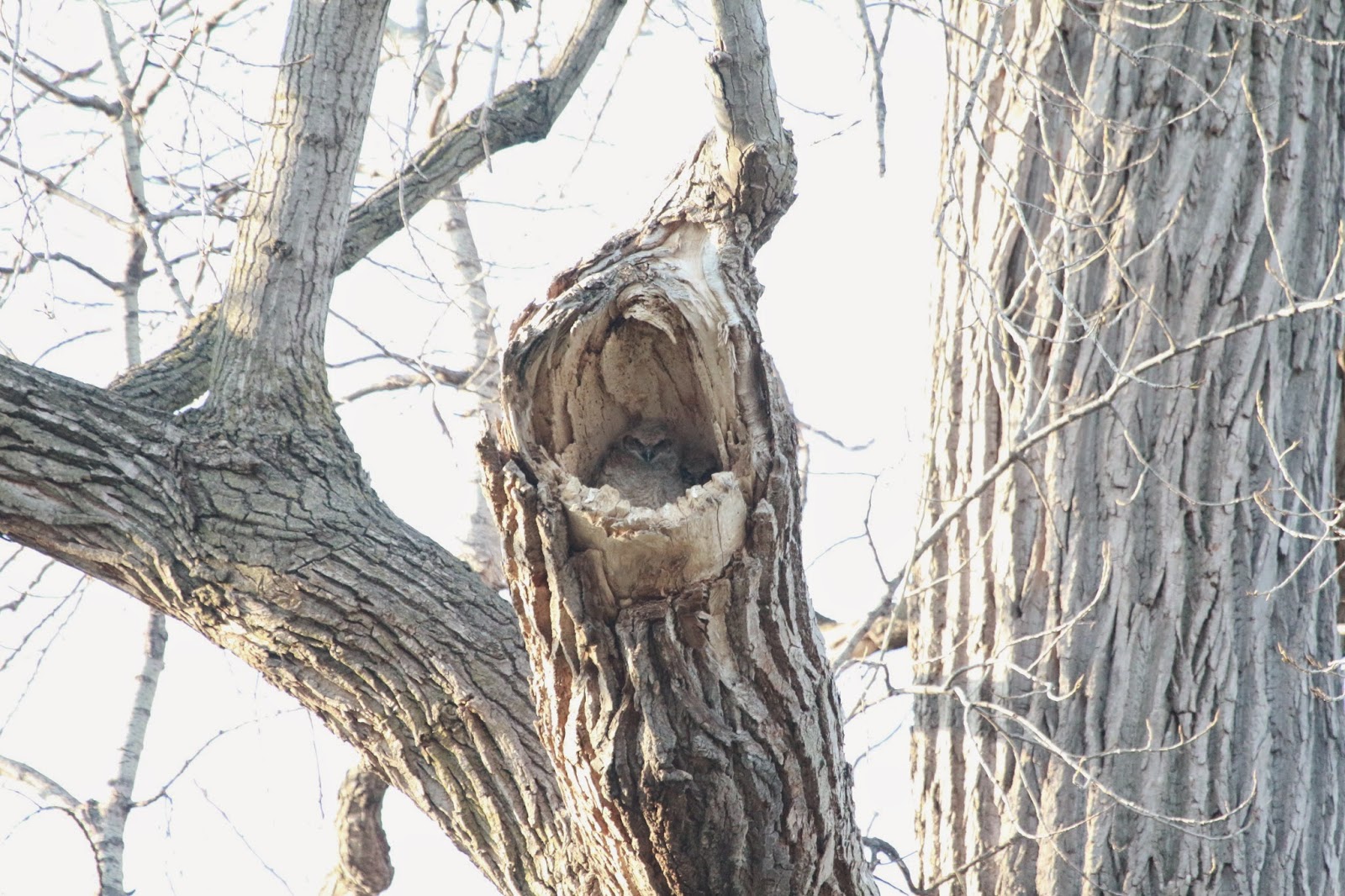 Sarah remained in her perch for a while later and began to groom and even yawn. 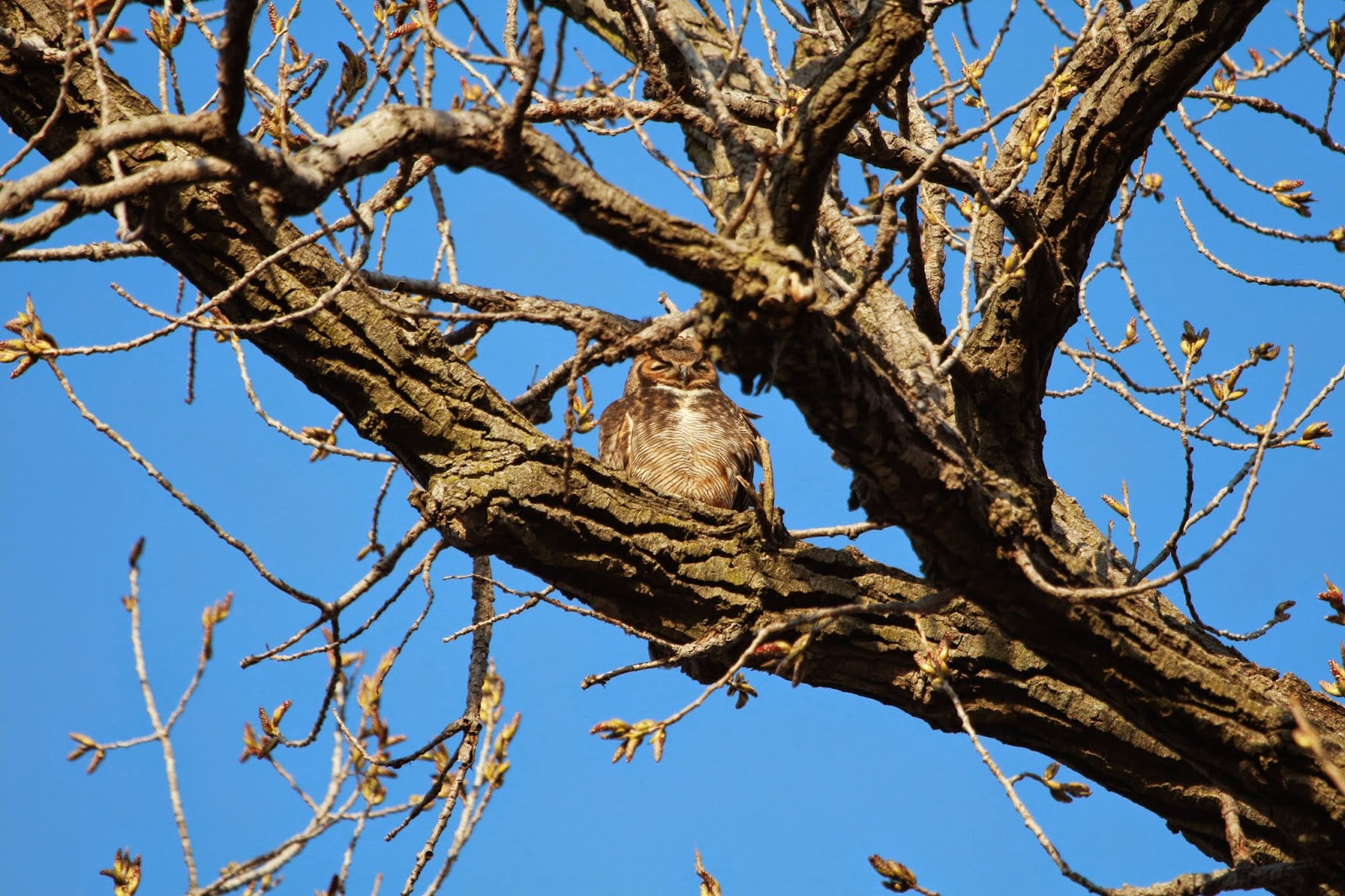 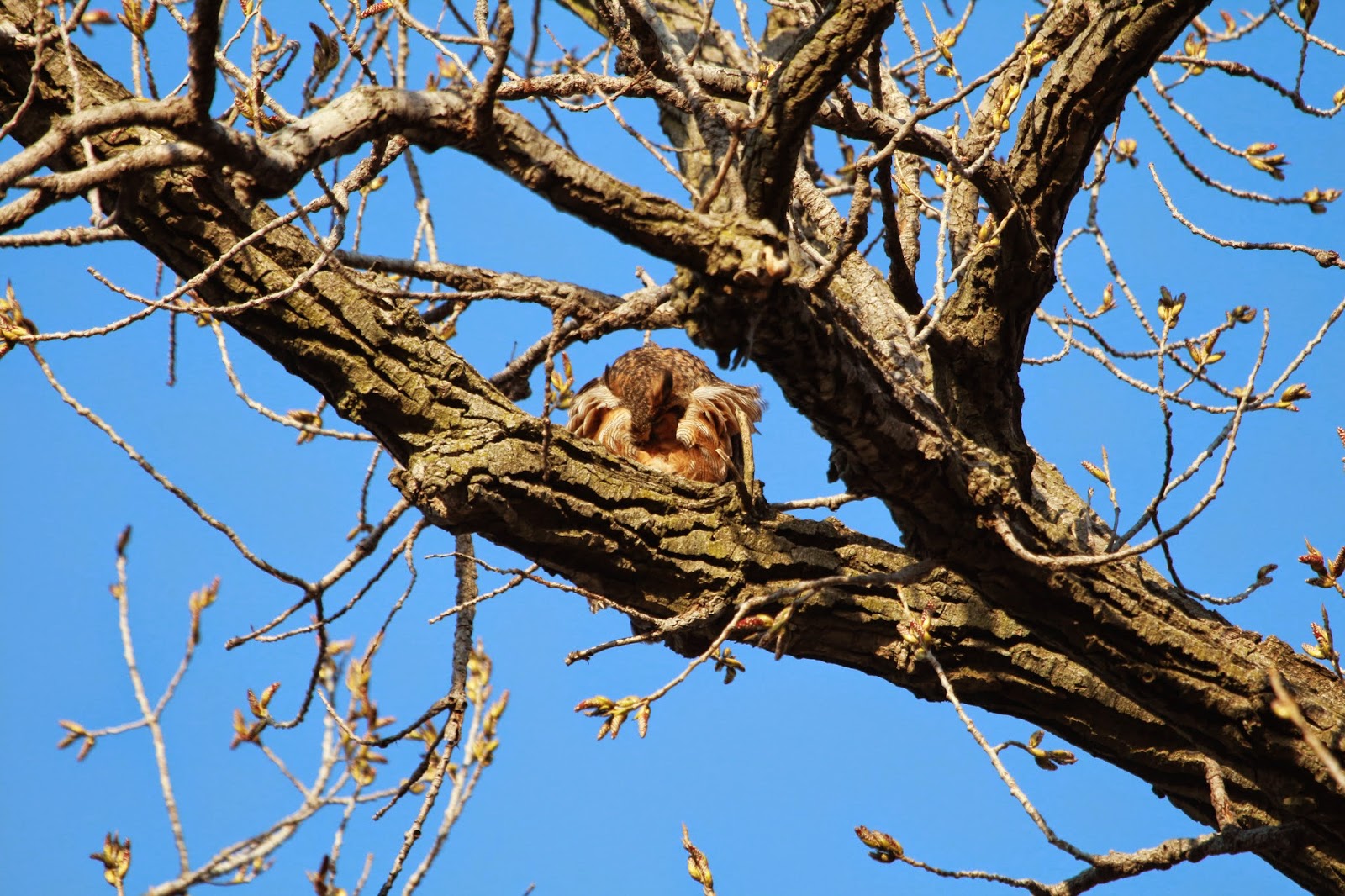 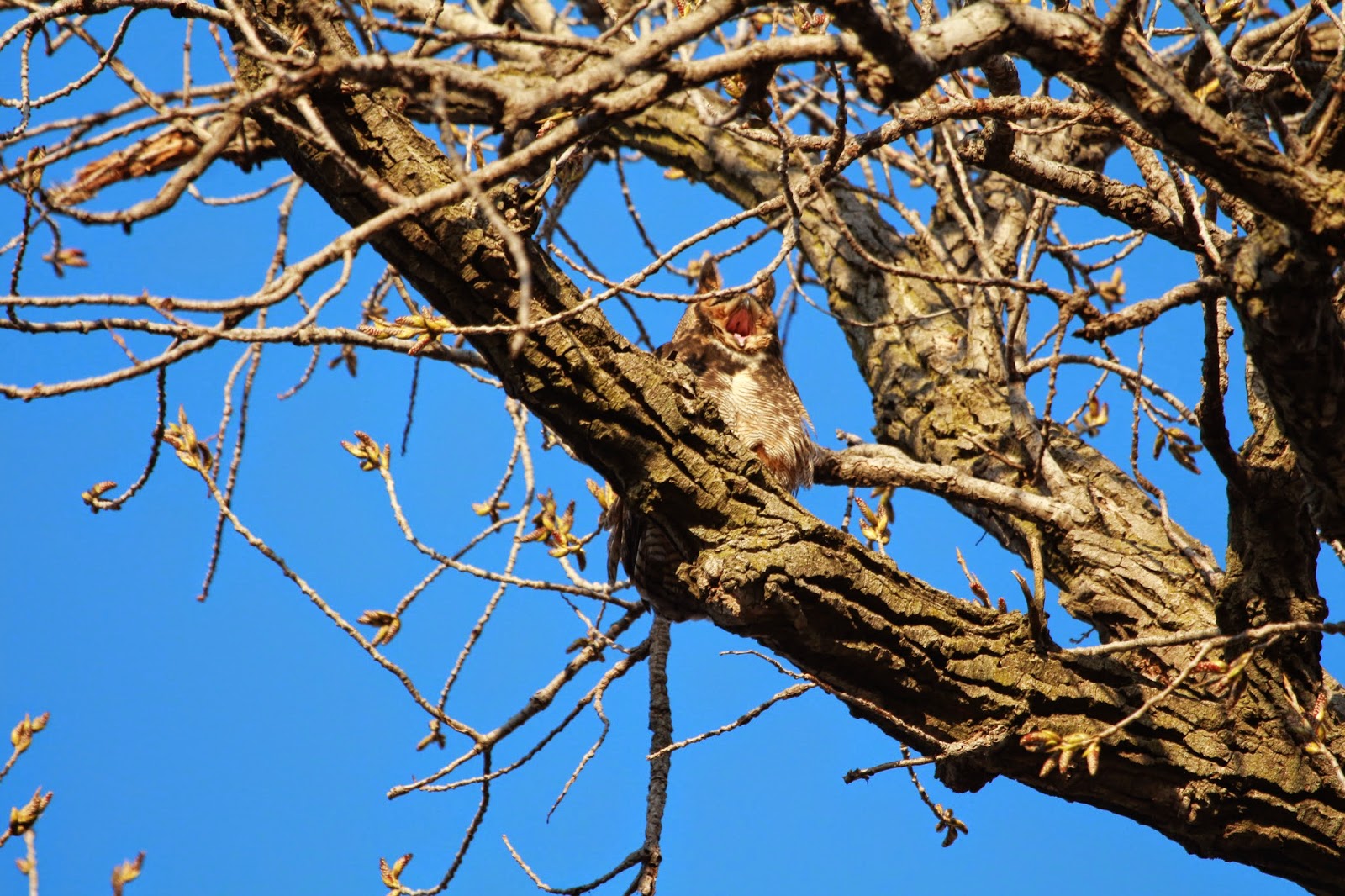 As Charles and Sarah continued to wake up, they moved from their perch spots and they really began to move by making predatory attempts on Eastern Gray Squirrels in The Nest Tree.  The Nest Tree is not only a nesting location for the owls but a year-round residence for these squirrels.  I mentioned how I was asked once why the squirrels moved into where the owls nested and I explained that the owls began to nest where the squirrels were already living.

True to form, the squirrels proved to be tough to catch and not shy about charging Sarah after a Mexican stand-off with her. Here is a photo of such a stand-off; the squirrel to the left of Sarah.  It was an action-filled ten minutes or so. 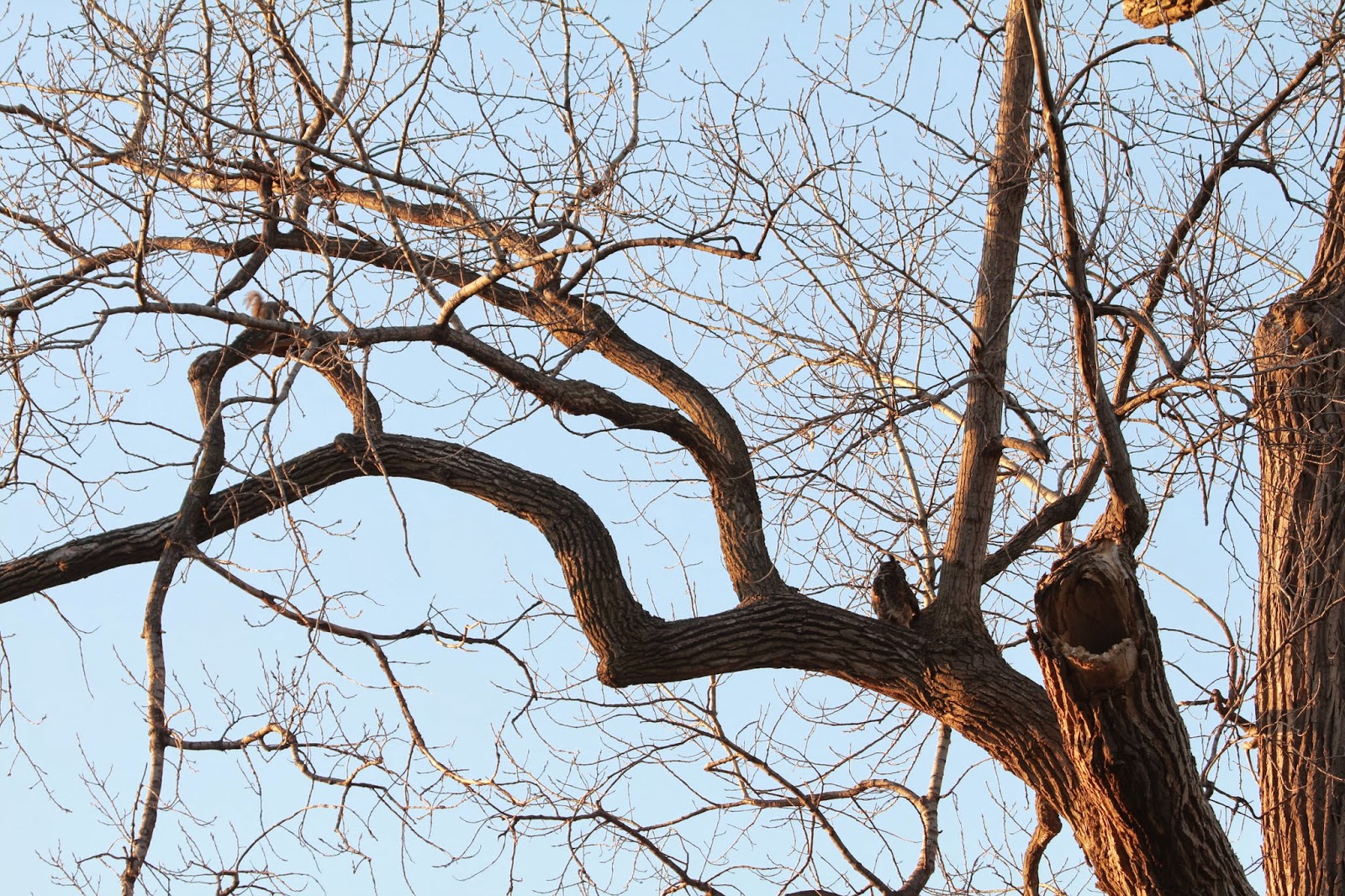 I enjoyed interpreting the owl-squirrel interactions for everyone and how I had seen such behavior many times over the years.  Sarah ended up on the large branch that contains the nest hollow and gave us a great look with the now setting sun upon her. 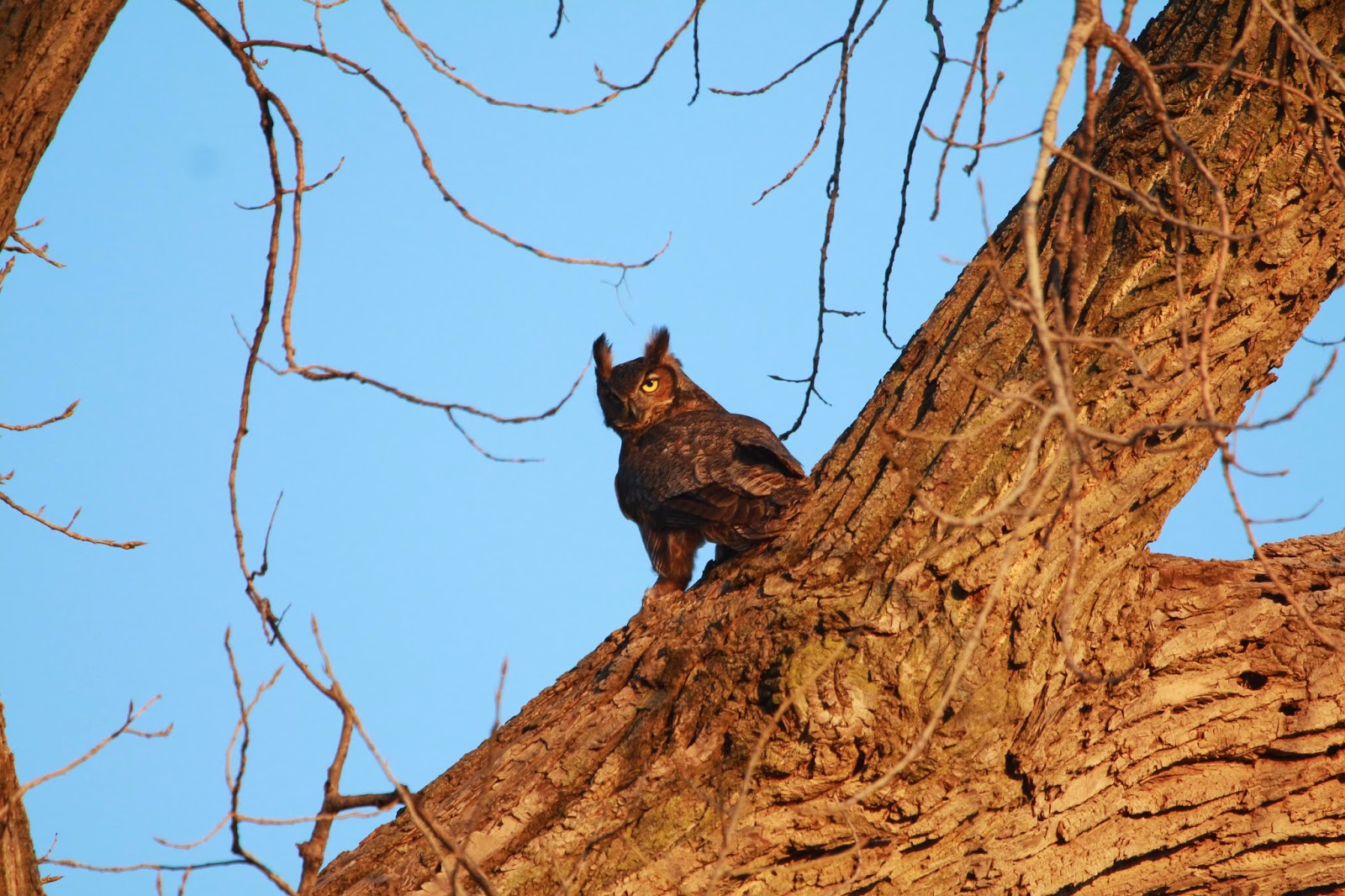 Charles flew to another tree opposite The Nest Tree. I told everyone that he might be waiting for the squirrels to be so focused on Sarah so that he could make a predatory attempt on the now distracted squirrels. Charles did just that but was unable to capture the ever elusive squirrels.  He landed at the edge of The Wooded Area with the sun giving him a gloriously gilded look. 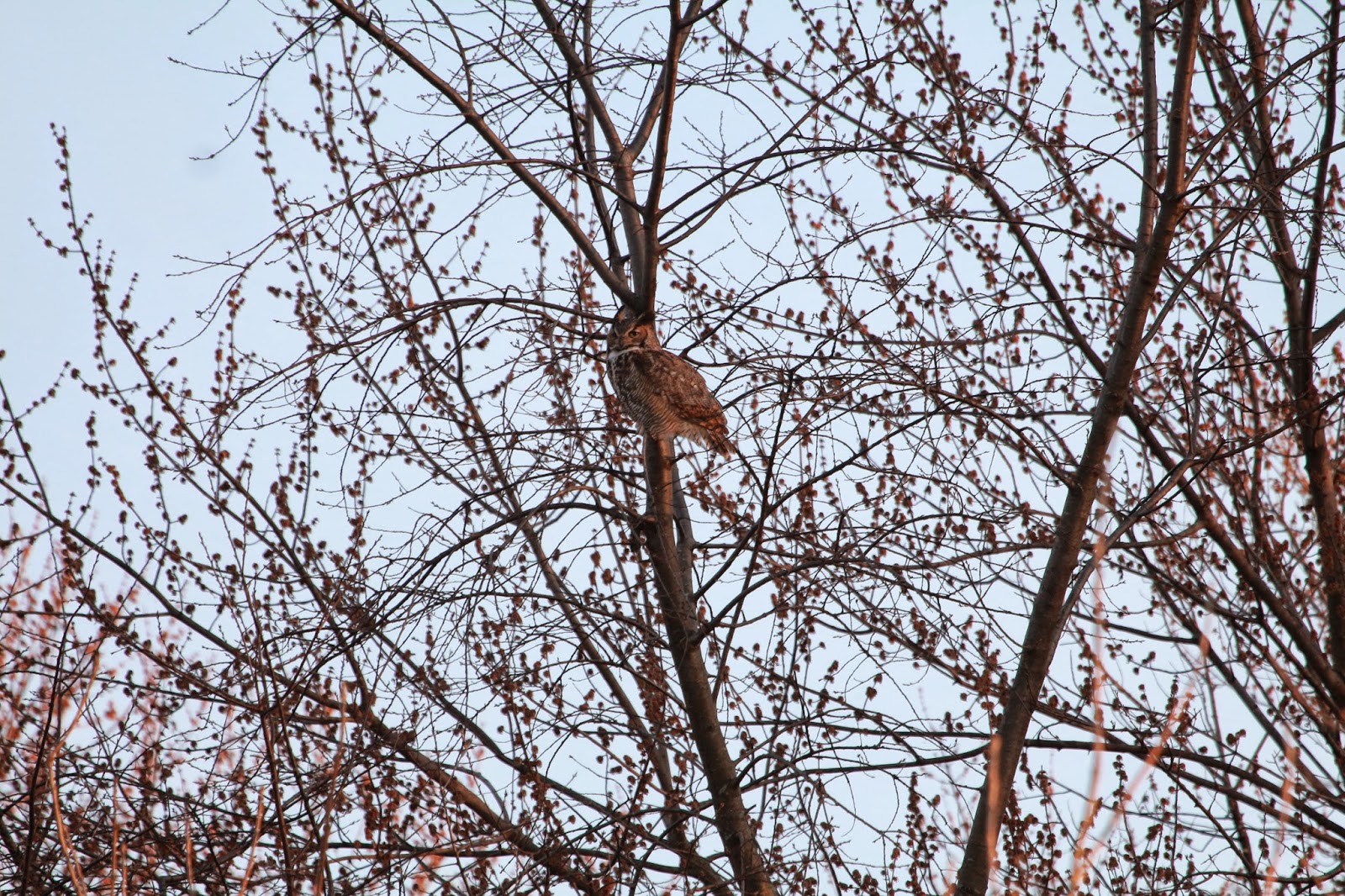 Sarah changed her stance on the tree and now faced the sun directly.  To say that everyone was awestruck by the beauty of Charles and Sarah is putting it mildly. 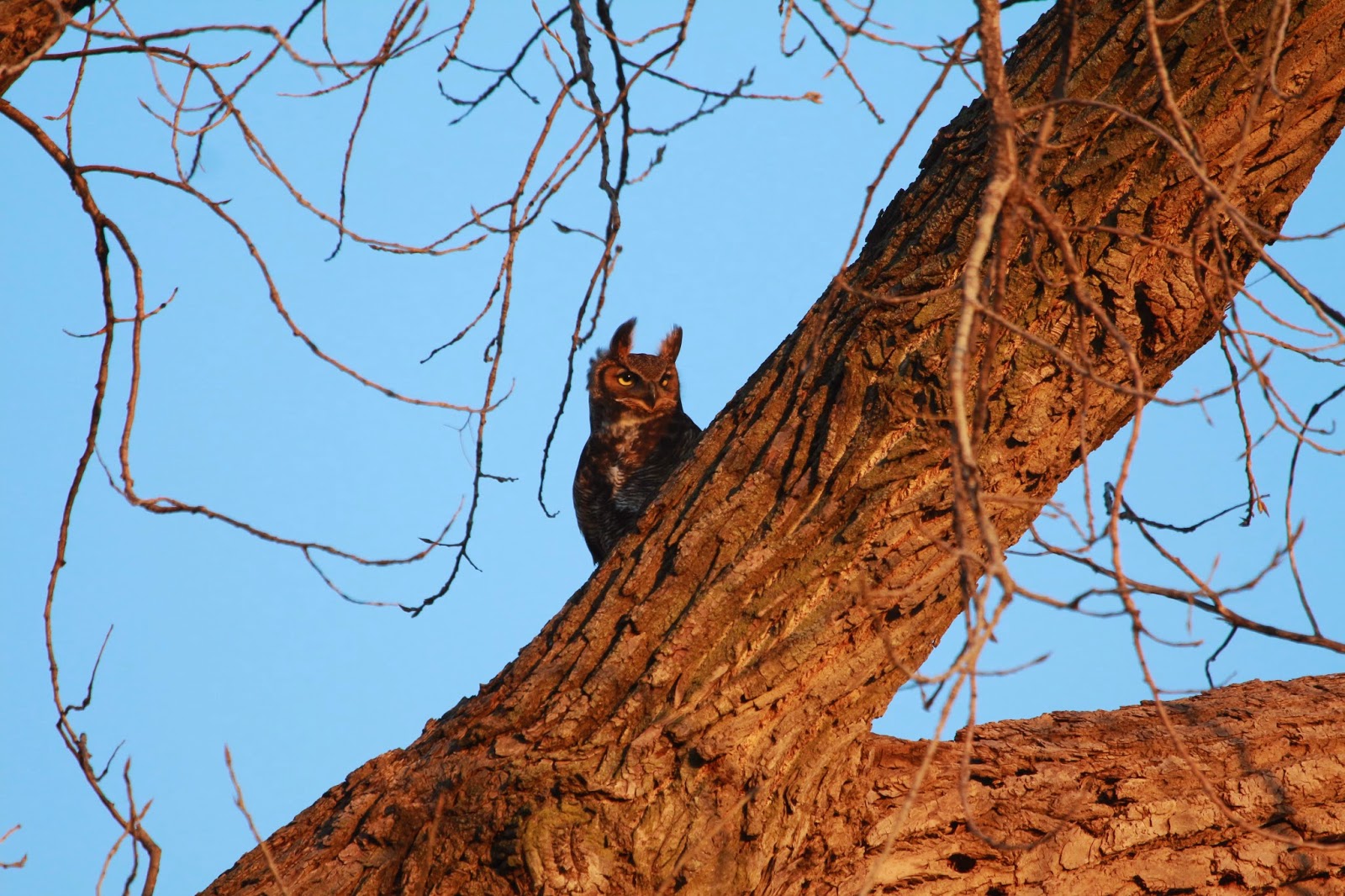 The now more awake and active owlets moved closer to the edge of the nest.  As always they are disgustingly cute.  In the best sense of the phrase. 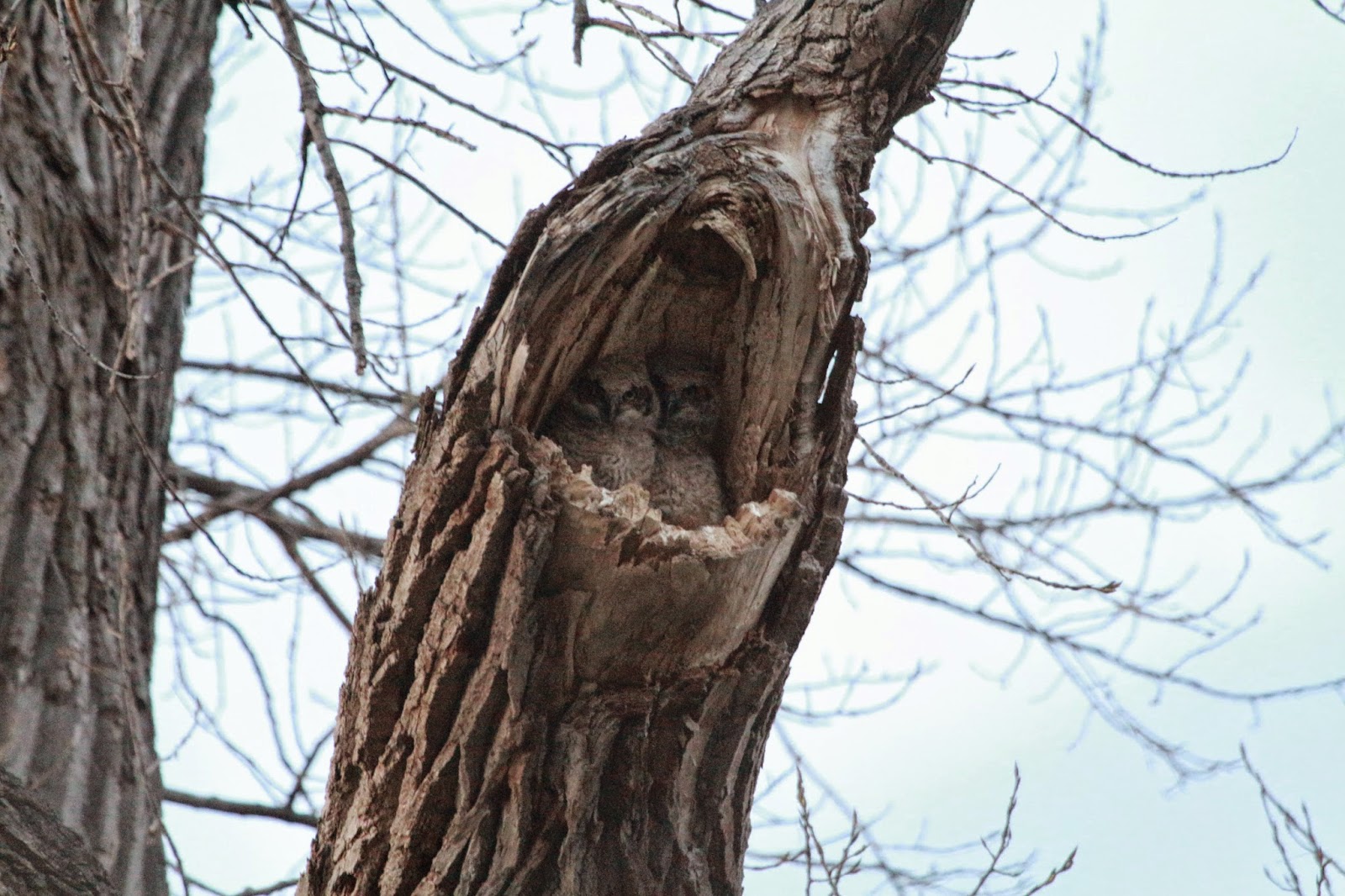 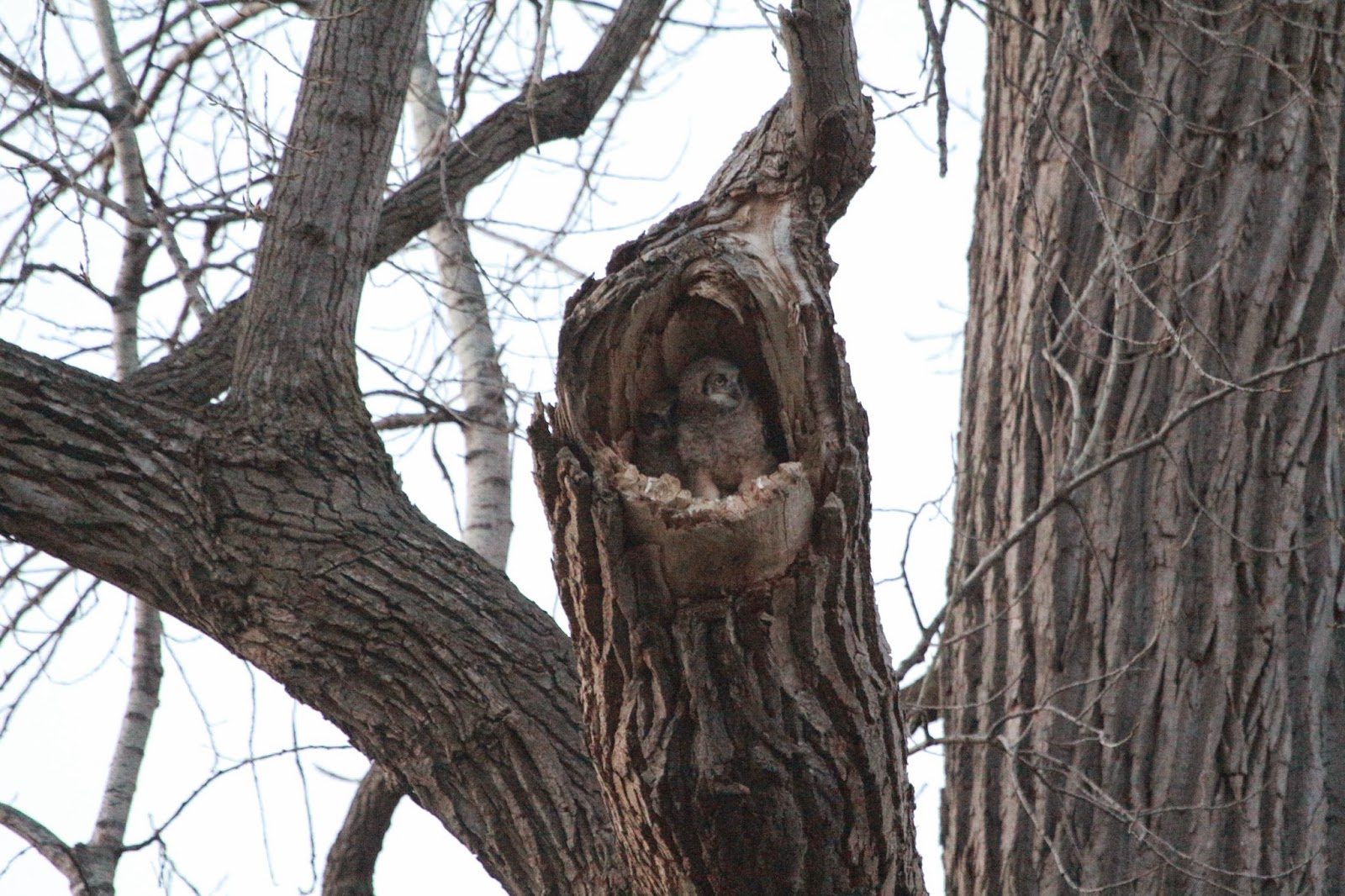 Charles and Sarah ended up close together again but now in two different Cottonwoods before they each flew out to one of the park's lakes.  Sarah is on the left and Charles is just flying off on the right. 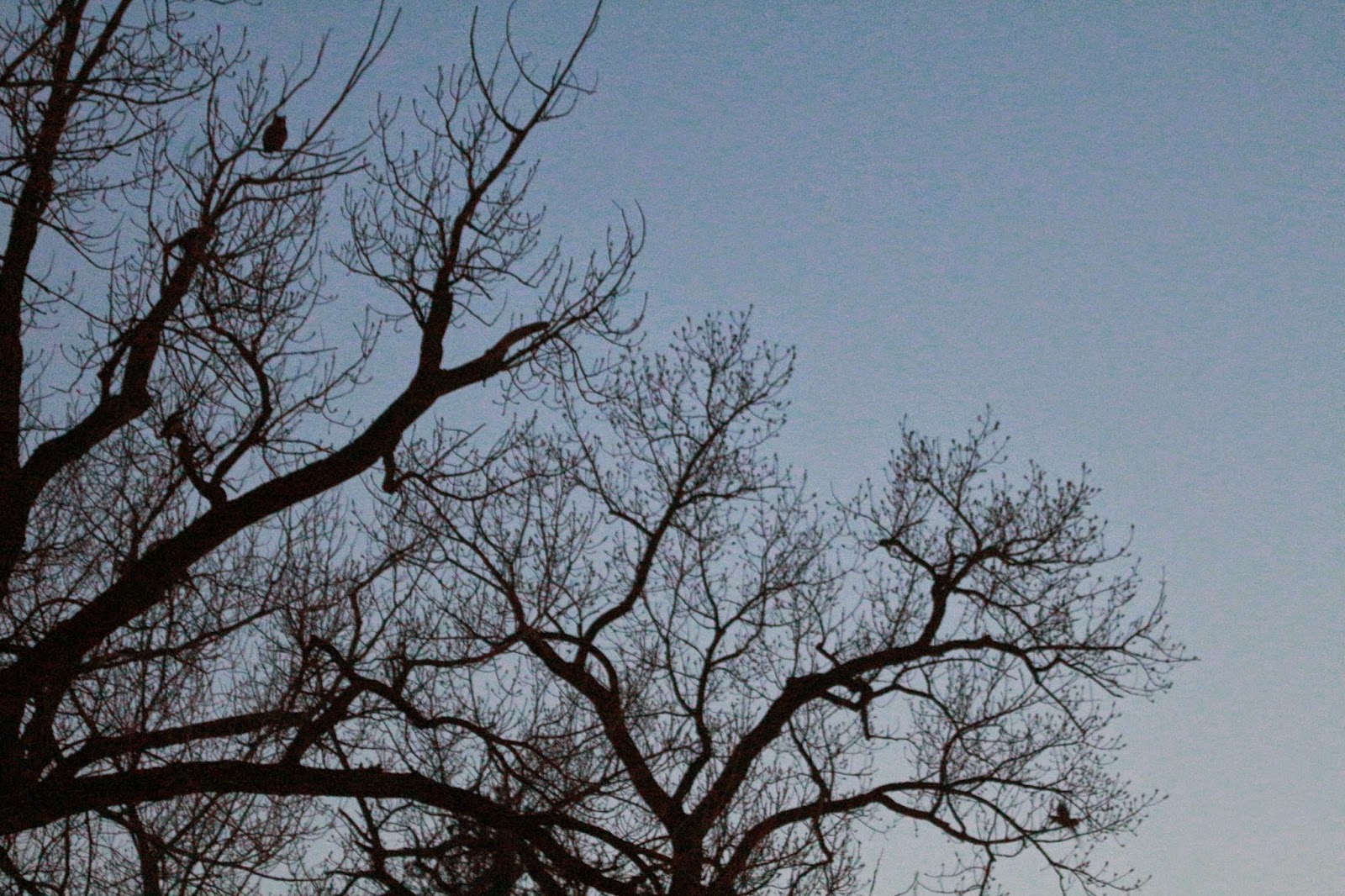 Pleasantly exhausted I headed for home but not before stopping a restaurant where my girlfriend, Wendy Schlegel, was hosting our friend Jo Viggers Davis visiting from Florida.  I shared many of these pictures with them and they loved seeing them.