Since my last post was rather photo-oriented, I am making this one more video-centric. My YouTube videos recently reached 56,000 cumulative views; a nice number to attain.

This first video, from June 23rd, shows what is probably Grace perched mere inches off the ground on The Fallen Tree.  She is intrigued and absolutely focused on the fireflies that travel and illuminate around her.  It was a joy to watch Grace and be able to capture some of these moments.

Next up is Harold, most likely, on June 27 perched in "the back" of The Overlook Hotel Tree. I have found him or Grace there a few times in recent weeks.  I had just found him and began to film him when, as you will see, he did an especially vigorous Fluff-Up, which caused feathers to quite literally fly. Harold was not finished as he segued into an Escalator Stretch.

Earlier that night I found Sarah in The Bushy Tree.  In the last week or so, she has perched in that tree or other parts in The Wooded Area and thus closer to the owlets.  This is in marked contrast to the weeks prior when both she and Charles perched in The Arena. With the owlets getting closer than not to dispersing, is she feeling a type of separation anxiety.  Or does she need a pause from Charles?  "Next on Owls On The Couch."   The sun broke through and her well-hidden spot received a blast of late sun. 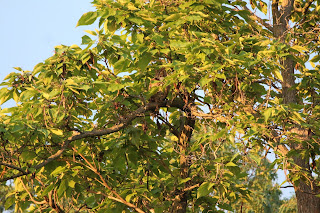 I then found Charles and the owlets, Grace and Harold but as the day dimmed and evening emerged, I found her pinnacling in The Eastern Tree. 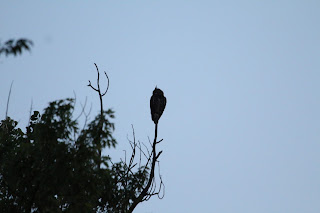 I had my doubts of the wisdom of Sarah's position as the ever more awake owlets were sure to find her and give chase seeking one of their two parental providers of provisions. This is exactly what happened.  Forgive the shaky video but if it is hard to film an owl in flight, filming three is jolly difficult. Listen for the loud and excited begging cheeps of the owlets.

Two of the three Jungle Gym Trees continue to be frequent perch sites for Grace and Harold.  On June 28, I caught a mere glimpse of Grace in The Jungle Gym Tree By The Archy Tree.  I moved around for a better view and found her fast asleep.  Notice how her lower eyelids are so far up her face.  This indicates that they are sleeping deeply.  What a beauty.

Last night, June 29th, was the half year owliversary point.  I have now watched the owls for nine-and-a-half years.  It is a thrill each time I reach such points as I never imagined how the owls would have such an impact on my life and even the lives of others. The first half of 2015 went well in all respects: observation, documentation and outreach.  The videos and pictures in this post I hope demonstrate the first two aspects of my work with the owls.  Outreach continues to grow and expand.  I gave my 14th talk of the year on Saturday and I have led 39 owl prowls so far. Talks in the first part of the year took me as far away as Joplin, MO and Carbondale, IL and as close to home as Webster Groves and Tower Grove Park. (As always, my next few public talks are on the right side of this website)

Thank you for reading and your support of the owls and my work with them!
Posted by Mark at 3:12 PM