Sad News About The Nest

I wish I had better news about Charles and Danielle's nest but sadly it has failed. For better or for worse I saw it actively failing Tuesday night and then both on Wednesday morning and subsequent evenings I saw all too emphatic reinforcement of nest failure.  I strongly suspect Raccoons as the cause of the nest failure.

I arrived in the park on Tuesday night 2/18 and met up with Bill Chamberlin, who had heard of the owls from our friends in common, Tom and Mary DeBenedetti.  Over 30 years ago, Bill had rehabilitated a Red-tailed Hawk in Wyoming and was curious to learn about the owls and my work with them.  I am grateful for Bill's presence that night as he was a great blend of observant, patient, empathetic and curious.

After rendezvousing with Bill we headed to check out the nest and Danielle was noticeably higher last night than her already higher position of the last several days; an often positive sign of successful hatching.  Given her behavior and timing of when I suspected eggs were laid, I was confident that hatching had occurred in recently.  [Please be sure to double click on the photos to see a larger version] 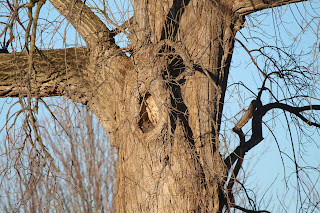 Charles was nearby in The Vine Hide Tree, his almost always perch site during this year's nesting.  The VHT is at the eastern edge of The Wooded Area just next to The Fleur de Lis Tree. 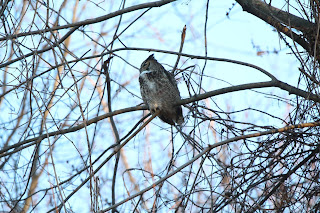 We watched both owls from a couple of different angles and the bright sunny conditions made for great views and light.

Charles had done some early hooting but then hit the snooze alarm so we went back to check on Danielle in the nest.  As we did a pair of Red-tailed Hawks flew past the Pagoda Circle side of the nest not overly close to the nest.  Charles woke up and hooted at them and the hawks passed out of sight.  Bill soon noticed that Danielle was out of the nest. She was not far from the hollow but it was odd to see her out of the nest at 5:15pm-a good 25 minutes before sunset. The last time I saw her leave the nest was on Sunday night and that was around 6:30pm. 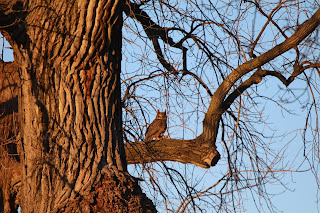 At first I interpreted her being out of the nest as a response to Charles' early warning hoot to the hawks' presence.  This interpretation swerved some when she flew with prey in her talons landing in The First of The Three Trees and began eating.  I thought she might be taking advantage of being out of the nest to take one of her few breaks from the nest. 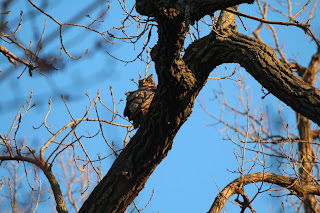 She stayed there for several minutes before back to The Middle Tree; the tree closest to the nest.  I hoped she would head directly to the nest but she spent quite a while in The Middle Tree even moving within it. Finally Danielle flew to the nest tree landing close to the hollow before flying to the edge of the hollow. 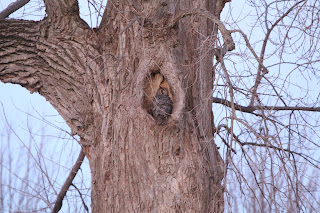 She lingered at the hollow and then turned around and flew back to The Middle Tree. I optimistically thought that she may have had a hard time finding a safe path to jump back into the nest.

This optimism soon faded when she flew back to the edge of the hollow and bill clacked before flying back again to The Middle Tree.  She was soon joined by Charles who hooted intensely as he has often done in this tree during this nesting period but there seemed to be a different edge to his hooting.  The bill clacking behavior is a very aggressive behavior in response to threats and danger and to see her do it at the edge of the nest was a not at all good indication of things being well.

To compound this, she had been out of the nest for well over 30 minutes.  While GHOW eggs are hardy, up to a point, in cold weather, newly hatched young cannot maintain their own body temperature and are incredibly vulnerable to the cold. It was not a freezing cold night but it was by no means a warm one either with temperatures in the high 30s and falling.  Bill and I kept a close watch on the owls and the nest but never saw anything in the nest. A frustrating lack of data that could not be helped as we could only see what we could see of the nest. While I have never seen Raccoons in this particular nest tree, they are all over the immediate vicinity of the nest and often in high numbers.

Danielle began a pattern of flying to the nest tree and then flying off to The Middle Tree or The Multi-trunk Tree; another tree close to nest. 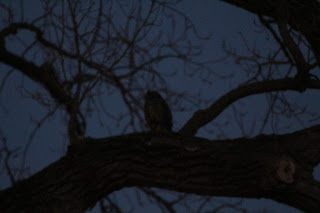 Danielle continued her pattern of trips to the nest tree before returning to The Middle Tree or The Multi-trunk Tree. I heard Charles call from The Wooded Area and soon after he was close by in a tree catty-corner from the nest. He hooted intensely and Danielle responded by making the begging-cheep like call the nesting females can use. It was one of the few times I had heard her make this call and I could not help but wonder if she used it to express panic and desperation. Charles flew to the nest tree and hooted more. Things happened quickly and vaguely when I lost sight of Charles and did not hear him hooting. This was followed by Danielle flying off towards The Multi-Trunk Tree and then out of sight.  I circled the area but did not hear or see either of the owls.  By now Danielle had been out of the nest for a little over 90 minutes.  Not at all good. I headed home with barely an optimistic thought or feeling.

I left for work earlier the next morning, Wednesday, 2/19 so I could stop in the park and check on the owls. Unfortunately Danielle was not back on the nest .  She was in The Vine Hide Tree with Charles nearby in Eastern Branch Tree. She flew to The Middle Tree which gave me some hope but then she got harassed by a Cooper's Hawk and then twice by a Red-tailed Hawk-it was crazy!  She then flew just into The Wooded Area behind The Vine Hide Tree and then quickly went to The Trio Conifers; where she often perched prior to nesting. It was like seeing a door slammed shut. (I did not have my camera with me)

All of this is a terribly sad development after such high hopes and positive developments of this nesting season.  I am curious but doubtful that a second round of mating and nesting will occur as it did with Charles and Samantha when there nest failed well into 2017-2018 nesting season.  I had never read of or seen such behavior before or since so its rarity may be especially high.

While the loss of the nest is a most unwelcome and crushing development, I do not want to excoriate or spew vitriol at the Raccoons.  Just like Great Horned Owls, Raccoons are highly adaptable animals with their own important ecological role.  Furthermore, GHOWs do kill and eat Raccoons-both young and adults. In fact during the entire nesting cycle I saw several predatory attempts by the owls on Raccoons; most of them by Charles and two by Danielle. As such the relationship between GHOWs and Raccoons is a complex and fascinating one. There are no heroes or villains in nature, just organisms trying to survive and reproduce.

Since Wednesday morning I have seen nothing that makes me think that a second round of mating and nesting is in the offing but I keep a window of hope open. Charles has been perched in several different spots deeper in The Wooded Area and has been quite vocal. That said,  I have not seen or heard Samantha on Friday, 2/21 or Saturday 2/22. I also am concerned that her presence and my ability to find, observe and document her will be hit or miss as it was for the vast majority of the time from her first appearance on 4/5/2019 until mid-12/2019.

Thank you for your time and support and sorry to be the bearer of such bad tidings.
Posted by Mark at 7:50 PM