Bye-bye to boots, hello to owls, egrets, Edward and more

Between Barb and Chris' exciting observations of Mo and the rest of the Great Horned Owl family and my short visit to the park the day before, I was itching for a nice long venture into the park.

Before I headed out, I had an important switch to make in my go-to-the-park gear. After many months of great use and much wear and tear, I had to replace my boots. These boots served me for well countless miles and through every terrain and weather the park could throw at them and me. I was reluctant to replace them but a hole in the toe area of left boot's sole became the proverbial straw. 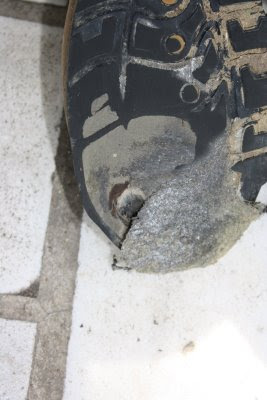 I had patched it but with the rain and mud of spring coming on strong, I needed a completely sealed pair of boots. Thanks to my sharp-eyed girlfriend, I was able to get a replacment pair of the same type of boots, Timberland Men's Waterproof Flume Mid Hiker Dark Brown, and a new pair of running shoes for a song. So I took some more photos of my boots, kept the one without the hole, and washed the pair of laces to keep as back up. 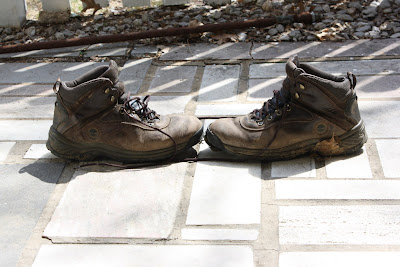 I shouldered my back-pack and head into the park, shaking my head at the change in weather. The day before was bathed in gorgeous sunshine but today was dramatically cloudy and windy and more than a little cool. 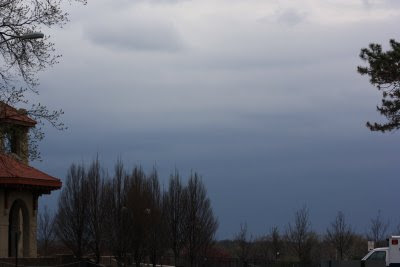 I headed straight for The Wooded Area and soon found Sarah in one of the large deciduous trees in the eastern third of the area. Her talons looked especially large as they grasped the branch that made her perch. 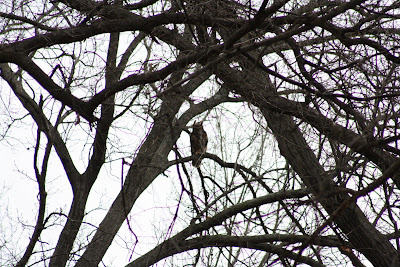 The talon spread of a Great Horned Owl is 4-8 inches in diameter and the claw part of the talon can be up to 1.25 inches in length! The leg muscles are structured in such a way that when the talons close they just don't close but lock in place. The talons close with up to thirty pounds of pressure and once closed and locked, almost nothing can unlock them. In one of the seminal books on the Great Horned Owl, The World of the Great Horned Owl by Austing and Holt, the authors relay the story of a Great Horned Owl kept as a labratory animal at a university. An inexperienced student working with the owl inadverdantly caused the owl to sink its talons into the students arms. The owl would not let go and the labratory staff were forced to cut the tendons of the owls legs before it would release its grip.

Charles was keeping post in his Favorite Conifer, tufts sharply pointed up and with his right eye open and his left eye mostly closed. 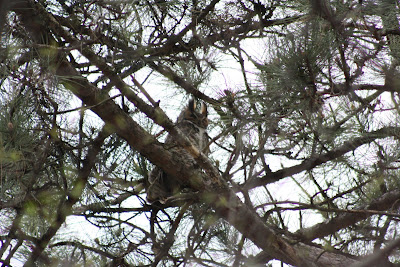 Since I arrived early to the park, I had plenty of time to go exploring in several locations before heading back to watch the owls at dusk, when they wake up and begin the evening's activities.
I walked around the "front" of The Wooded Area and as often happens, I ran into Edward Crim. I introduced Edward and his great photo blog Forest Park 365 in a recent posting of mine. We were catching up when I spied something coming down the road that I knew Edward would want to photograph. It was Mr. Talanya of Talanya's Pizza fame on his trippy, tricycle. I've seen this man on this outsize, pump-action tricycle many times over the years but it was only recently that someone identified him to me. I've most often seen him going down the backside of The Wooded Area as I am watching the owls. This bike makes an odd sound and an odd site and I have been known to think to myself, "That's a somewhat odd chap." I then go back to standing next to a tree watching owls. Mr. Pot meet Mr. Kettle.
Now instead of just shooting a few discreet photos from a distance, Edward went up to Mr. Talanya and introduced himself and began chatting with about his bike and Forest Park 365. While I am no shrinking violet about pointing the owls and other critters out to people, Edward makes me look shy! Edward and Mr. Talanya chatted for a while as I took photos and Mr. Talanya even gave Edward a coupon for Talanya's Pizza. 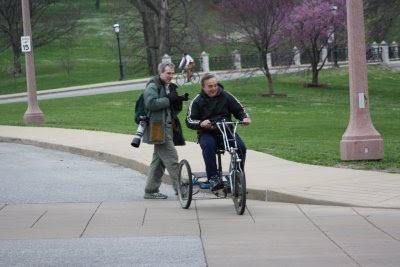 Edward and I continued east stopping around the "moat" around the Nathan Frank Bandstand, where we saw saw a Great Egret and it's smaller cousin the Snowy Egret. These were among the first of each species that we had seen this year and we welcomed them back to the park. Once by the little waterfalls east of Deer Lake we saw another Snowy Egret hunting at the bottoms of one of the waterfalls. These and other small waterfalls are among the best places to find egrets and herons as they wait patiently for fish or other potential prey to appear on the veritable prey conveyor belt made by the waterfall. 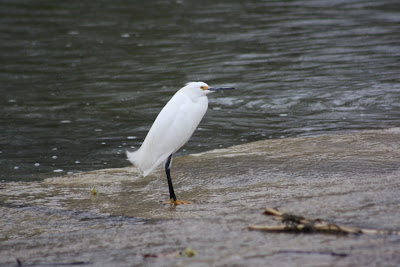 The air soon became filled with interesting birds and bird happenings. We looked up and saw a large bird gliding along the gusty winds. I identified it as a Black Vulture and not the more frequently seen Turkey Vulture. That said, in my observations, vultures are uncommon in and around the park. I have probably seen fewer than 10 so it was great to see one. I snapped away with my camera and it wasn't until I uploaded them that I saw that vulture was not just flying... 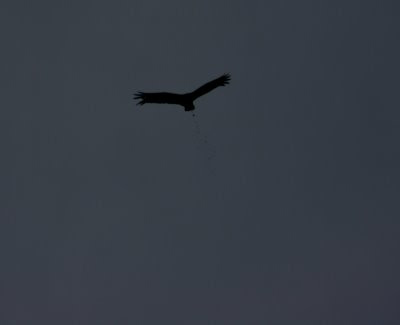 The vulture flew off and my attention was caught by a Northern Flicker. Along with the Downy Woodpecker, the Northern Flicker is the most commonly found woodpecker species in the park. Its plumage is a fascinating combination of colors and patterns that in satorial terms somehow works for them. More to come...
Posted by Mark at 12:44 PM