This was going to be a busy but fun day. The day was grey and a little cool but not too bad. It began on a different path than most Sundays in the park. I started off in the park but headed north and west to meet Katie, Libby and Mark Rank. Katie and I were meeting so that she could conduct an interview with me about the owls and my interactons/observations with them for her school newspaper. I wrote about this interview and how it came to be and how it turned out earlier and you can read all about that here.

After a stimulating interview and owl prowl, the Ranks headed for home and I continued my visit in the park. I first went to the other section of The Successional Woods to look for the Barred Owls that reside there. I found one but as I went in for a closer look going as quietly and cautiously as possible, the Barred Owl flushed and flew away. I have found these owls to be extremely touchy and easily disturbed. While I'm not too surprised by this, it can be frustrating. As a way of explaining my understanding of their behavior, allow me to quote an e-mail I sent in late 2008 to a contact of mine at Forest Park Forever. This person tipped me off about seeing Barred Owls consistently in this portion of The Successional Woods and they asked me about the Barred Owls being so close to Charles and Sarah and overlapping territories among the two species in general. Here's what I wrote (with a few corrections):

I really appreciate you contacting me and for asking for my input.

I’m glad you have seen this Barred Owl with such recent frequency but like you I have only seen one there and yes, it’s proximity to the very heart of the Great Horned Owls territory is cause for concern. For example, one of the first encounters I had with Barred Owls ever in the park was in the winter of 2006/2007 and it was in the same part of the Successional Woods. At that time, the mated pair of Great Horned Owls (Charles and Sarah as I call them) had an active nest along Government Drive, right across from The Boathouse. Charles and Sarah were duetting and then I heard two Barred Owls call and respond to each other from within the Successional Woods. Within seconds, Charles headed to the very epicenter from which the calls emanated. I was unable to reacquire Charles that night but that was the first and only time I have heard a Barred Owl call from the Successional Woods and the only time I observed two in that area. I remember shaking my head knowing that the Barred Owls were putting themselves at risk.

In Wayne Kramer’s "Owls of the United States and Canada: A Complete Guide to Their Biology and Behavior", there is a stunning photo of a Great Horned Owl on top of a Barred Owl that the Great Horned Owl had killed. On a slightly smaller owl scale, Dwight G. Smith, in his book "Great Horned Owl" tells an anecdote of a study he was doing with radio-collared Eastern Screech Owls. One night, they followed the radio signal but could not find any owls. They eventually traced the transmitters-they were inside of pellets from a Great Horned Owl. In the same book, Smith gives a rundown of the different raptor species, diurnal and nocturnal, small, medium and large that Great Horned Owls have taken as prey. It is not a short list.

I think the Barred Owl in the Successional Woods is able to stay safe and alive for two main reasons. One, it keeps a low profile. I have rarely heard it vocalize and I have never seen it outside of the woods. Two, in my observations, Charles and Sarah do not go into this part of The Successional Woods . The most I have seen them do is fly over the woods or fly to a high branch of a tree there for a short time before flying off east. Great Horned Owls generally like open areas with perches for hunting. With their daytime perches and the core of their territory in the other portion of the Successional Woods (what I call The Wooded Area), they may not have a need to use the Barred Owl’s portion of the woods.

In documenting the Barred Owl I realized that I had forgotten to upload the previous day's footage so I headed for home. It was a tad frustrating to go all the way back home but it proved worthwhile. I uploaded the footage and even had a bite to eat.

I came back to the park via the AAA Golf Course. Like last year, there is an active hawk nest right by one of the course's greens. I had noticed this nest three years ago and had kept an eye on it. Both this year and last year, my friend Chris Gerli told me that the nest was being used. On this day, both parent hawks were in residence. One of them was in the nest while the other was in a nearby tree. 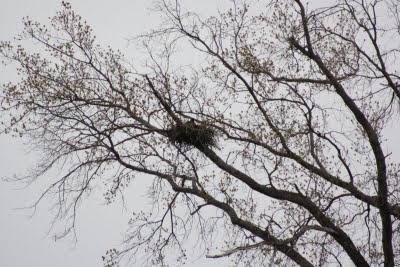 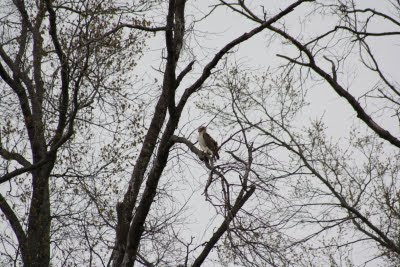 There was some movement in the nest by an adult. Perhaps the adult feeding or brooding a chick but I could not see a chick. The rain that threatened throughout the day began to fall. The rain was mild enough that I could use my umbrella and the smaller of my cameras but strong enough that I packed up SLR.

I headed north and heard and then saw a Belted Kingfisher near the Vadenventer Gates. I had never seen them in that area before, which made this sighting even more enjoyable than usual. My next stop was to look for Barred Owls again but they remained out of sight.

I continued on to The Wooded Area. I heard a begging cheep close to The Quintet Conifers and I found Art in this area. 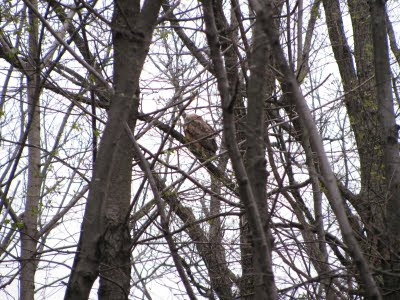 I reacquired Sarah in the same spot where I found earlier in the day with the Ranks. The rain was back on after a little pause, unfortunately. Charles was still in his favorite conifer but had moved within it to an unusual spot in the tree which brought him quite close to Art. 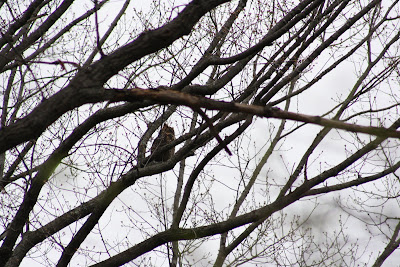 I then went to reacquire d Mo as the rain paused for a while. I found and I decided to stay and watch him. Chris Gerli and Barb Brownell came through the area with Chris' niece, Mia. Last year, Mia had joined them for an owl prowl and proved to be an adept owl finder. I had also met this trio earlier this year for an owl prowl. I'm glad that Chris and Barb continue to impart their passion for wildlife to Mia! 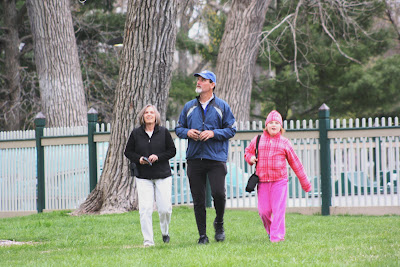 We watched Mo for a while to before heading over to The Wooded Area to find the others. We found Art shortly before Charles went flew off from his perch. Art did a great flight of at least 60-75 yards ending with a solid landing, all of which impressed us greatly. Barb, Chris and Mia had to head off and I decided to return, again, and watch Mo for the rest of my time. 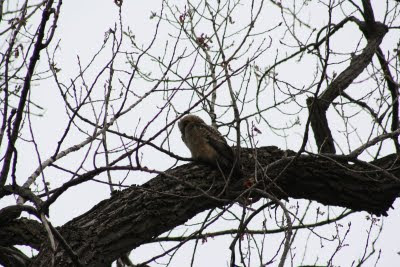 The rain held off for a while but returned at a whipping pace. As I watched Mo, I heard Charles hoot from The Wooded Area. Mo did some more hopping around and position changes along with head bobbing followed by begging cheeps. He moved out to the end of a branch, which looked like a nice launching pad. The rate and intensity of the rain increased forcing me to I open my umbrella. Mo's begging cheeps increased in volume. He took off and landed in another tree. His flights while small were solidly executed. In the early stages of the post-fledging portion of an owlet's life, each of their flights is a big deal all combining to give the owlet the experience and skill to mature into an adult owl.

The rain continued but my battery power in my video camera began to ebb. I worried about the rain and its possible detrimental effects on Sarah and Charles finding food and sharing it with their youngsters. With the rain unceasing, batteries failing and a long, fun day gone by, I jumped on the bus and headed home.
Posted by Mark at 1:34 PM