To find an owlet, you have to think and act like an owlet

April continued to live up to the promise of spring with another gorgeous, warm day approaching the 70s.

Like the other day, I found Charles in Charles' Fav Conifer from the far side of The Wooded Area. Check the below picture closely for the yawning male Great Horned Owl. I was chuffed to not only see him yawn but also to capture it with my camera. For the hundreds and hundreds of hours I have spent watching the owls, yawning remains an infrequently seen behavior. 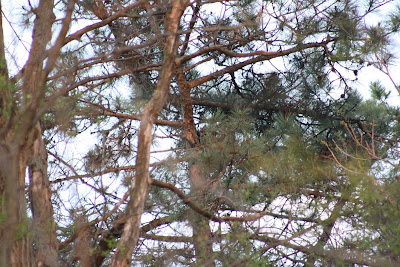 I spied Sarah in Wooded Area only a few minutes after finding Charles. Charles flew to The Bushy Tree, gracefully landing in the same spot as night before. Shortly after, I found Art not too far from the Quintet Conifers. 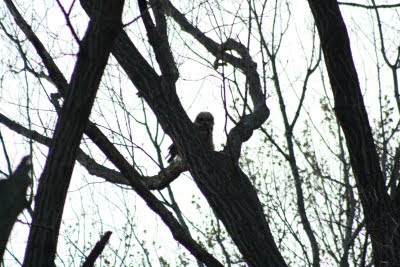 By adjusting my vantage point, I could see Charles, Sarah and Art from one place. As a fast and unidentified heron or egret came flying through Sarah did a double winged stretch. She followed this by fluffing out a bit and grooming some. While watching Sarah I realized that Charles was not hooting at all and he had not done so the night before either. The post-nesting season period from the spring until the late summer is the least vocal time of the year for the parents. Hooting and duets do occur but with nothing like the vigor of the autumn and winter.

Wendy called and she was going to come out tonight and look for Mo. After I rang off, I saw a group of fellow animal fans that I saw on occasion; nice folks who are always eager to hear the latest about the owls and other critters in the park.

I called Barb Brownell and Chris Gerli . I then met up with them and then went to meet Wendy. Barb had been interviewed today by Katie Rank for the article that Katie wrote about me. I thanked her for taking the time to be interviewed. I met up with Wendy and we joined Barb and Chris at the north bank of the lake to look for Mo.

We looked carefully but could not find him until Wendy took a new tack. She did a great imitation of the raspy begging cheep made by Great Horned owlets. After just a few of the calls, Mo responded with his own begging cheep that led us to find his location. I gently scolded Wendy for reasons she was well aware of, namely that while imitating the call of an animal can help you find the animal, it can also be a unintentionally confusing and/or provocative gesture to the animal. However, as someone who when hungry, gets as if not more whiny than a ravenous Great Horned Owlet, Wendy knows how they feel. As she said about the begging cheeps that night, "They come naturally to me." Wendy's sincerity and overall grooviness won the day.

We found Mo in the group of conifers along the lakeside, the same group where he had some spent some time last night. We speculated if he had gone back to other side of the lake last night after I had left and only to return to the north side of the lake. Mo moved around the conifer going from thicker sections of branches to more exposed perches. His begging cheeps decreased for a time but soon ramped up again. We moved further away from the group of conifers just in case Sarah came by; we did not want to get in between her and Mo!

After Mo moved back to a thicker section of conifer, Wendy and I took our leave and headed out for dinner. This way, we knew for sure that one of the hungry little ones would be fed!
Posted by Mark at 12:57 PM