A wet, short but good day

Saturday, April 18, 2009
Between the day's rain, weekend errands and some social outing that night, it was a short time in the park this day. I had just enough time to count heads and enjoy seeing the owls. On my way over to their territory I saw an American Robin bathing enthusiastically in a puddle. 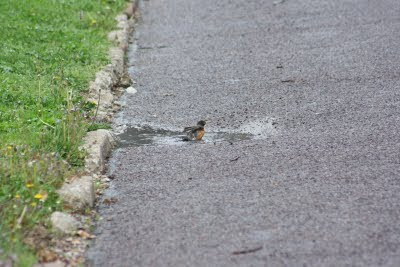 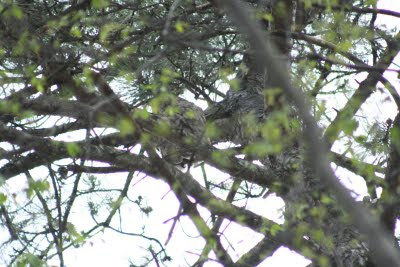 Art was in an exposed spot just southwest of Charles and in the midst of an intensive bit of grooming. Some of the most intense owl grooming sessions I have seen have occurred after rain and snow. Maintaining healthy feathers is vital for all birds and as the feather construction and arrangement of owls' feathers makes owls' silent flight possible, this maintenance is especially imperative for owls. Silent flight not only allows owls to make stealthy predatory attempts it also provides them with a quiet background from which to hone in on potential prey with their acute hearing. 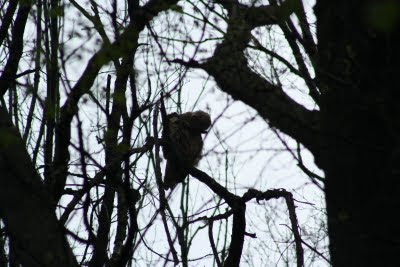 In the above photo, Art is pulling one of the feathers called primaries of his right wing through his bill. By doing so, he removes any loos feathers, dirt and parasites. In the photo below, his head is just barely visible as he grooms around the inside of his right wing and his back. 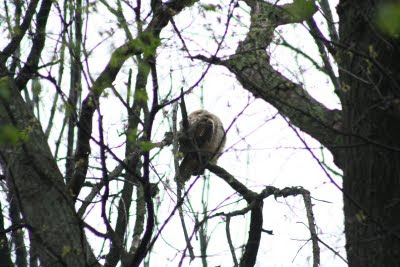 Sarah was perched just a short distance behind Art. 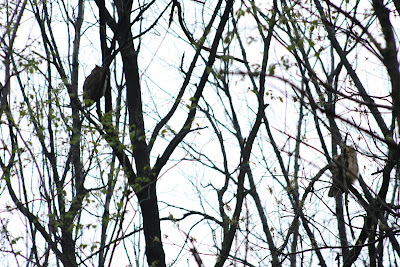 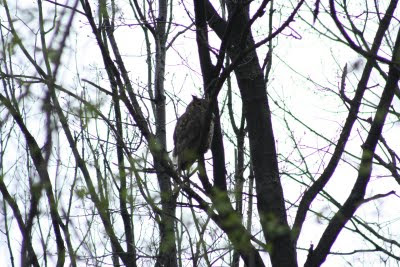 The recent rain made the burgeoning blooms of the trees pop with color. While it was great to see this evidence of spring, I could not help but think of the challenge of finding owls and other critters in the thickly leafed trees of summer. Every season has its trade-offs of advantages and challenges for observing animals. The bare trees of winter make it easier to acquire and reacquire the owls but the frigid temperatures and cutting winds turn owl observation into a type of endurance sport. Summer's challenges are finding parent owls and owlets among the wave of green foliage and then keeping track of the ever more adventurous owlets and their active parents.

After watching Sarah and Art, I repeated the recent pattern of looking for Art after I had found the rest of the family group. On my way over to finding this wandering owlet, I saw a Great Egret on the south bank of Post-Dispatch Lake and a Snowy Egret on eastern bank of Wildlife Island.

I found Mo again in the White Pine he had been using recently; could this be his favorite conifer? 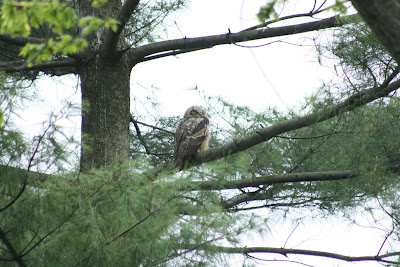 There were good indications that this was the case as I found a fair amount of whitewash (owl droppings) and a bit of squirrel, or possibly rabbit or raccoon, fur on the ground around this tree; themselves a good indication that Mo was being fed by his parents. 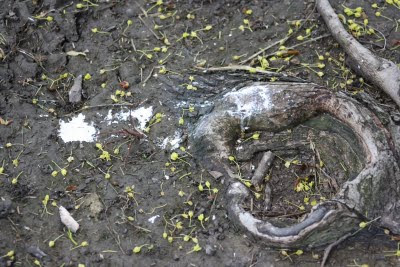 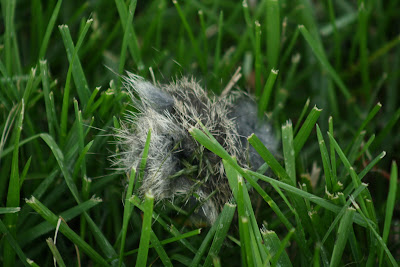 While these indicators of feeding cheered me, I still hoped that Mo would join the rest of the family group, sooner rather than later. I headed for home but not before taking in some more evidence of spring. 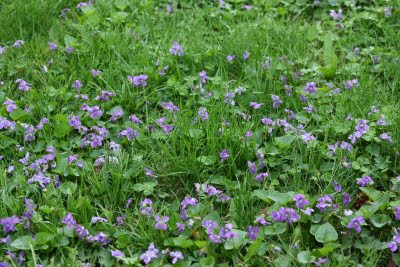