The Owlets Have Fledged!!

Tuesday, March 22, 2011
In what comes as a pleasant, albeit puzzling surprise, we found on Monday night that the owlets have fledged! Fledging is the process of the owlets leaving both the immediate nest and the nest tree. They are well into The Wooded Area, a good 80-120 yards from the nest. Sarah is keeping a close eye on them and I'm sure Charles' hunting efforts continue apace. Here's the younger/smaller of the two: 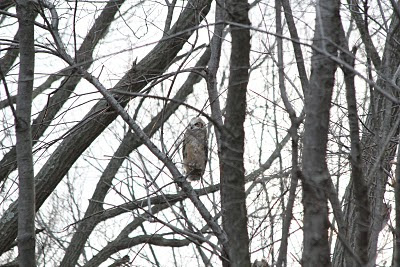 Here's the older/bigger of the two: 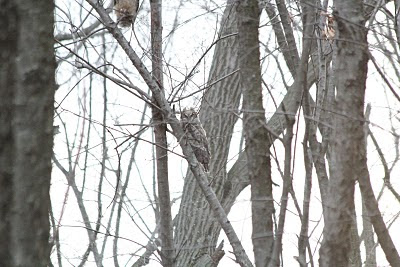 You can tell the age size/difference by the greater feather maturation in the older one including bigger tufts!

Here are the two of them in one shot: 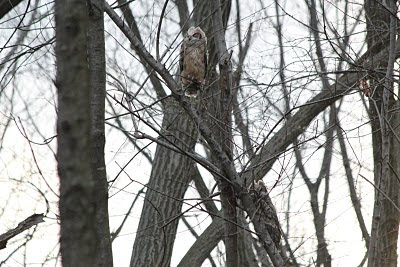 They are both gorgeous Great Horned owlets and I am so excited that they have fledged!

What is funny and embarrassing about finding the owlets is that I was right by them earlier the same night and I did not see them! The night began with me not seeing the owlets in the nest. I found Charles in his favorite conifer and Sarah a short distance from him just south/southwest of his pine-laden perch. It was puzzling to see Sarah much further away from the nest that she had been of late.

I went back to the nest and met my new owl friend Brenda Hente. Brenda has done a brilliant job of going from zero to owl addict in the last several months. We carefully looked in the nest but saw no owlets so we went to see Charles and Sarah. We located them and as we marveled at Sarah's massive, feather-covered talons, I turned my head slightly to the left and saw the younger owlet! I could barely believe my eyes and I had to look again before I whispered to Brenda that I saw an owlet just ahead of us. As Brenda delighted in seeing the owlet, I looked again and saw that the older, larger owlet was just inches away from its sibling! It was stunning to see them both and I continue to be bowled over that I missed seeing the owlets mere minutes ago!

The owlets were a very healthy distance from the nest and in some low trees a few feet away from Sarah's perch. I had seen one owlet in the nest the night before and now I even wondered that one was an third owlet, even though we had only ever seen two. Brenda and I returned to nest and ran into Kathleen Young, who had been out the night before with her parents. They along with Kathleen's daughter had gone out on a prowl weeks earlier and attended my talk at The Audubon Society and were fast devotees of the owls. We told Kathleen about the owlets fledging and she too was thrilled. We all looked at the nest and seeing no one, we returned to see the fledglings.

We were under a spell as we watched the owlets begin to move about and even bill-clack in their excitement. Their rasping begging cheeps, whispered and gradual at first but soon loud and frequent, filled the air. Charles went off to hunt and we wished him a speedy return. The older owlet took a spill as he made a flight that may have been too long for his experience level. We breathed a sigh of relief as he got off the ground and half-climbed/half-flew to a low perch. After many minutes of ear-to-ear grins fromwatching these owlets, we headed for home.

The owlets' fledging is not a surprise because of their age, they are in the 6-8 week-old range, which is when Great Horned Owlets fledge. The surprise is because we had seen all but nothing in the way of wing-exercising by the owlets. Before owlets fledge they spend many nights flapping their wings so that they build up their wing strength prior to making their first flights. I have seen this every year and a few years back I dubbed this process "hitting the gym." It is an amusing and even confusing process because it looks as the owlets are about to take flight as they furiously flap their wings but they remain fixed to their perches. So how did these owlets fledge with us barely seeing them "hitting the gym?" I'm not sure but a future post will review the time line of what I observed just prior to fledging supplemented with observations from owl friends new and old. Thanks for reading!