Mistletoe Works-Much More Mating By The Owls! Part I

Even though I am more of a fauna person than a flora devotee, I am reasonably comfortable in saying that I have never seen mistletoe in Forest Park.  That said, there must be some near the owls' territory as they are mating and mating some more.  I am more confident that they will nest so frequent is their mating.

In my last post, the last mating was observed was on December 19.  Charles and Sarah did not mate while I was watching them on December 20.  The next time they mated in the same place as they had on December 17, the glade containing The 2010 OP (Observation Post) Trees in The Hilly Wooded Area.  Check out this footage and listen closely at the 20 second mark for the high pitched that female GHOs make when mating.

They did not mate on December 22 despite some intense duetting and even perching immediately next to each other in The Middle Tree for several minutes.  Starting on December 23 they have mated every night including last night.  On December 25 and 26 they mated twice on each night!  I have seen two matings in one night before but this may be the first time I have seen it in consecutive nights.

The mating on December 23 was interesting and demonstrated something a behavioral point I have seen in prior years, namely that where the owls are matters when mating.  Charles and Sarah had a great duet and met up in The Middle Tree on the same branch, mere inches from each other.  However, where Sarah was perched made her, for lack of a better word, inaccessible.  Several branches above her prevented Charles from hopping on her back to mate with her.   Sarah solved the problem but hopping over Charles as if she was playing checkers and he promptly hopped on her and they mated.  Unfortunately it was too dark when I was filming to see this but you can hear my narration and hear them mate below.

December 24's mating was wild because I was doubtful that mating would happen.  Thankfully due to patience and perseverance by Charles and your friendly neighborhood Owl Man, mating was observed. The night began on an interesting note.  Earlier that day my friend and fellow owl devotee Robin Street-Morris had been to see the owls and posted some photos of them on Facebook.  Judging by the photos, I was pretty sure where the owls but asked Robin for confirmation, which she kindly gave.  In Robin's photos, Sarah was in her recent favorite perch in the tallest of The Trio Conifers and Charles was perched at the edge of the 2011 Nest Hollow in The 06/09/11 Nest Tree.  Of late Charles has been using this hollow a great deal, sometimes perched edge and other times deep within this cavernous hollow.  I arrived at their territory and headed to look for Sarah first.  No Sarah, at least not in The Trio Conifers.  When not there she has also roosted lately in The Overlook Hotel Tree.  No dice and no Sarah.   I tried to look through The Wooded Area for a long distance, needle in a haystack view of Charles in The 2011 Nest Hollow.  I trained my binoculars to find Charles only to find myself looking at Sarah's back.  She was in an unusual perch in a tree between The Fleur-de-lis Tree and The 08/09 Salon Trees. 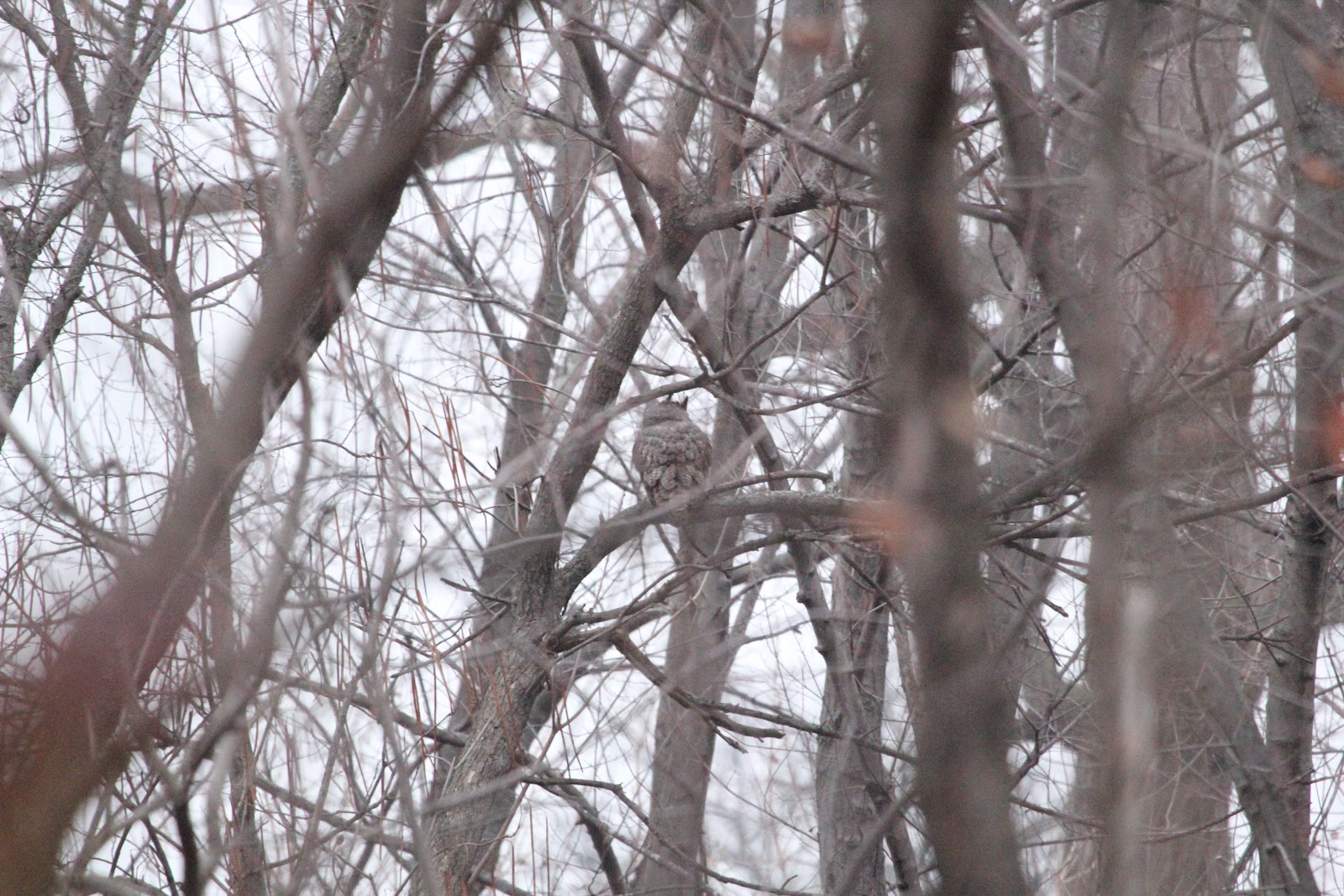 I headed down to The Arena to see Charles and get a better look at Sarah.  Charles was at the edge of the 2011 Nest Hollow but as soon as I trained my camera on him, he turned around and went deep into the hollow.  Check out his gorgeous tail feathers. 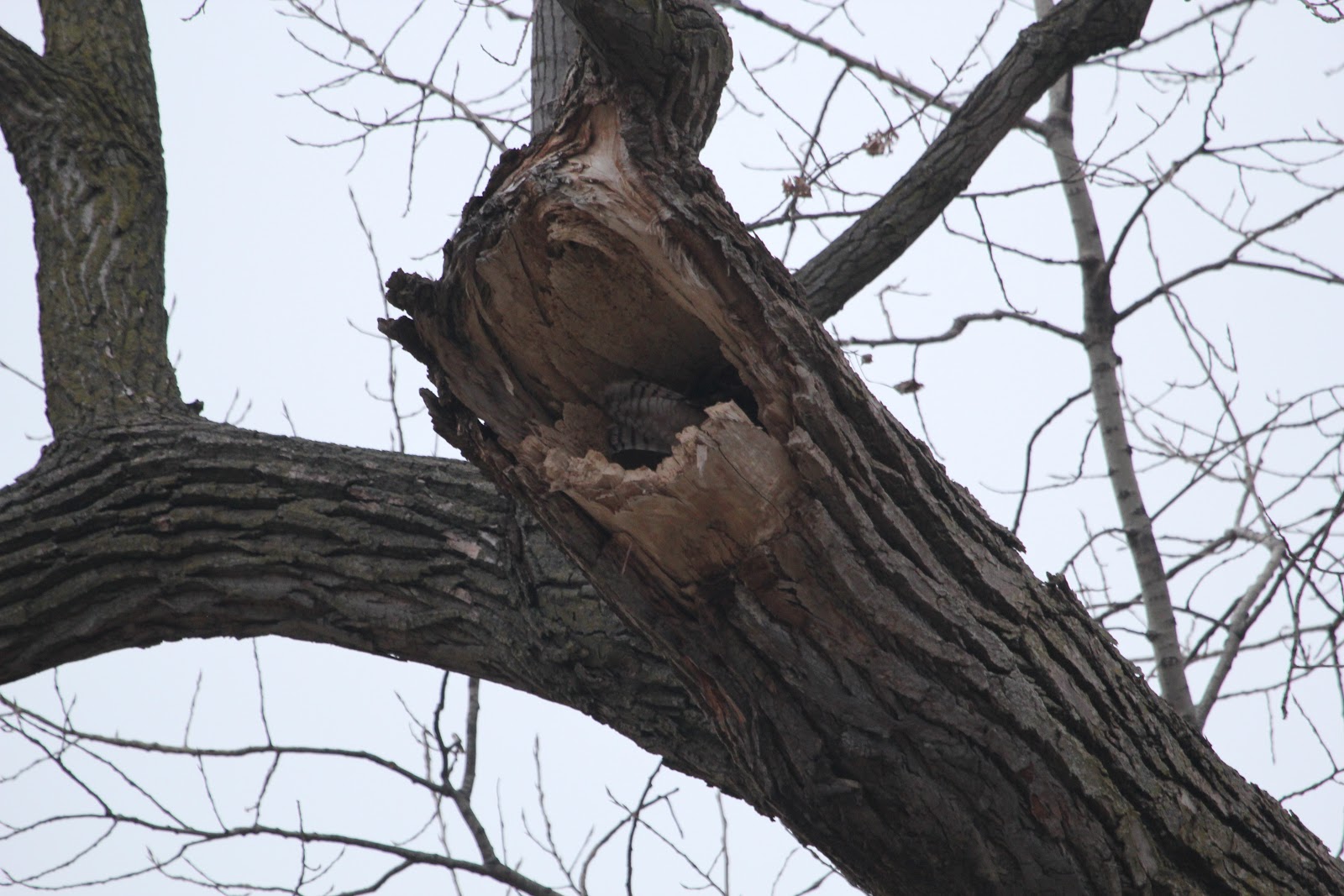 With Charles out of sight I went to look at Sarah.  She began to groom as you can see her here grooming her leg or pants, as my girlfriend, Wendy, would say:). 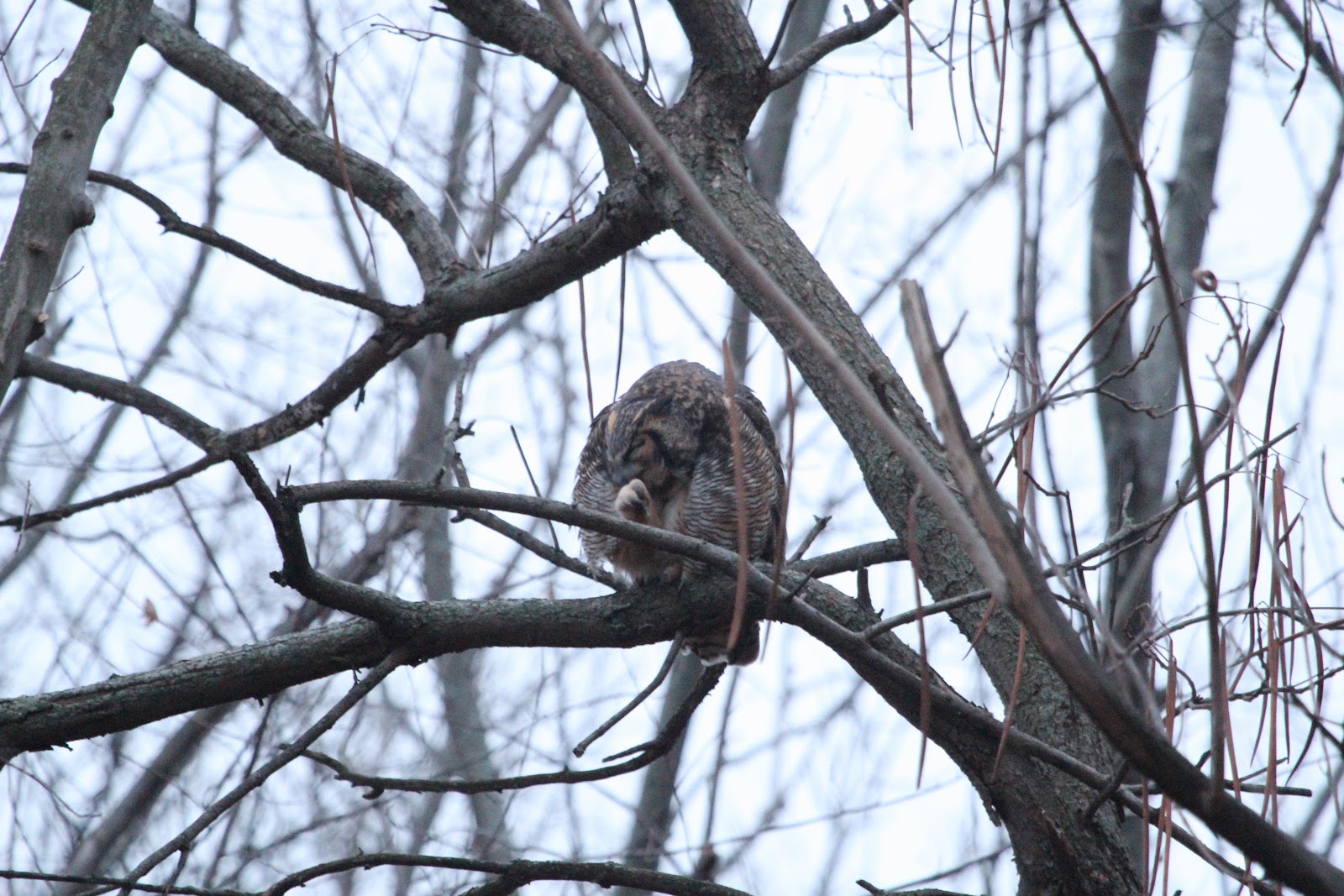 As sunset approached, the owls hooted a few times but as time went on they never got into a duet groove.  Sarah flew to a couple of different perches including The Eastern Tree and hooted but at this point Charles was not responding.  Sarah flew off northwest landing about 100 yards from Charles.  I had not given up hope and I was thrilled when Charles finally emerged from the hollow.  My hopes were diminished not because he did not hoot, on the contrary he was hooting at his peak rate, 3-4 hoots per minute, but because of where was hooting.  Instead of landing in a nearby spot and hooting he landed in The Jungle Gym Tree by The Overlook Hotel Tree.   He was now 150-200 yards away from Sarah.  While it was jolly cold that night there was only a light wind so I am reasonably certain that Sarah could here the now vastly vocal Charles. She did not reply at all.  She eventually flew off going further northwest but then I saw a largish shape head back closer The Arena but I was not sure if it was Sarah or not.  Charles continued to hoot and I decided to stick with him.

The cold was biting and nasty, eating through my five layers on my torso, balaclava, hat, two pairs of gloves, two pairs of socks and boots.  I lamented my decision not to bring a thermos of hot tea with me. In an effort to stay warm, I changed positions, which helped keep the blood flowing.  This can be a risky move as an owl can fly off so quickly and quietly that you can never know the direction in which they flew unless you see them depart.  I was in mid-position change when I noticed the tempo and tonality of Charles' hoots change.  His calls came faster, more trilling/purring and softer.  I realized that Sarah must be nearby.  I didn't hear her hoot but the next thing I knew I heard them mate. Charles then flew right over me, staccato hooting as went. He landed in The Middle Tree and Sarah made a hunger demand call.

They had mated 31 minutes after Sarah had flown off northwest! Sarah made a few more hunger demand calls before flying off northwest.  Charles hooted triumphantly and moved to the 06/09 Nest Hollow, eventually disappearing deep into the hollow.  I headed home grateful to have seen them mate and grateful to be walking home fast and feeling my body warm up gradually.  Be sure to check out part two of this post, thanks for reading!
Posted by Mark at 6:48 AM