Sunday night in the park presented great opportunities to see owlet behavior at close proximity.  Just as I arrived in the owls' territory before sunset  I heard the warning calls of Northern Cardinals near The Permanent Puddle.  I began my search there and in seconds I was mere feet away from the middle owlet.  (Be sure to double click on the photos to see a larger version). 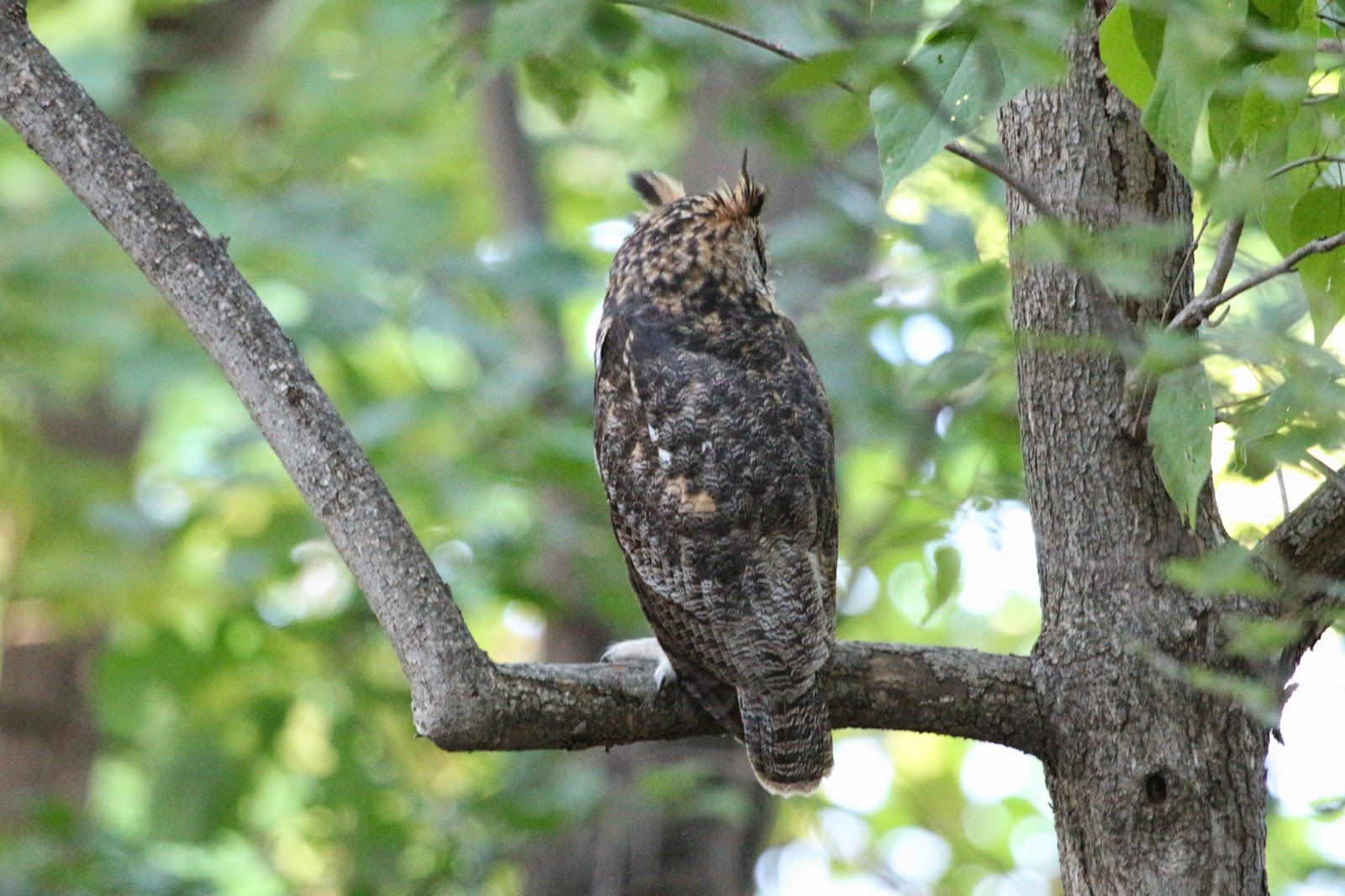 As I watched this owlet, she demonstrated the amazing neck flexibility of owls. Owls eyes are so large that they cannot move their eyes in their sockets. To compensate, they have evolved incredibly flexible necks that allow the owls to turn their heads up to 270 degrees.

Owls have fourteen neck vertebrae, double the seven humans have, but a recent study at Johns Hopkins University (shout to my sister, Mary, who she did her advanced degrees in public health there) uncovered other amazing anatomical adaptations that makes this neck turning possible.  Read all about this amazing study here.

Going along the the outskirts of The Permanent Puddle, I managed to get a look at this large and in charge owlet from a few different angles. 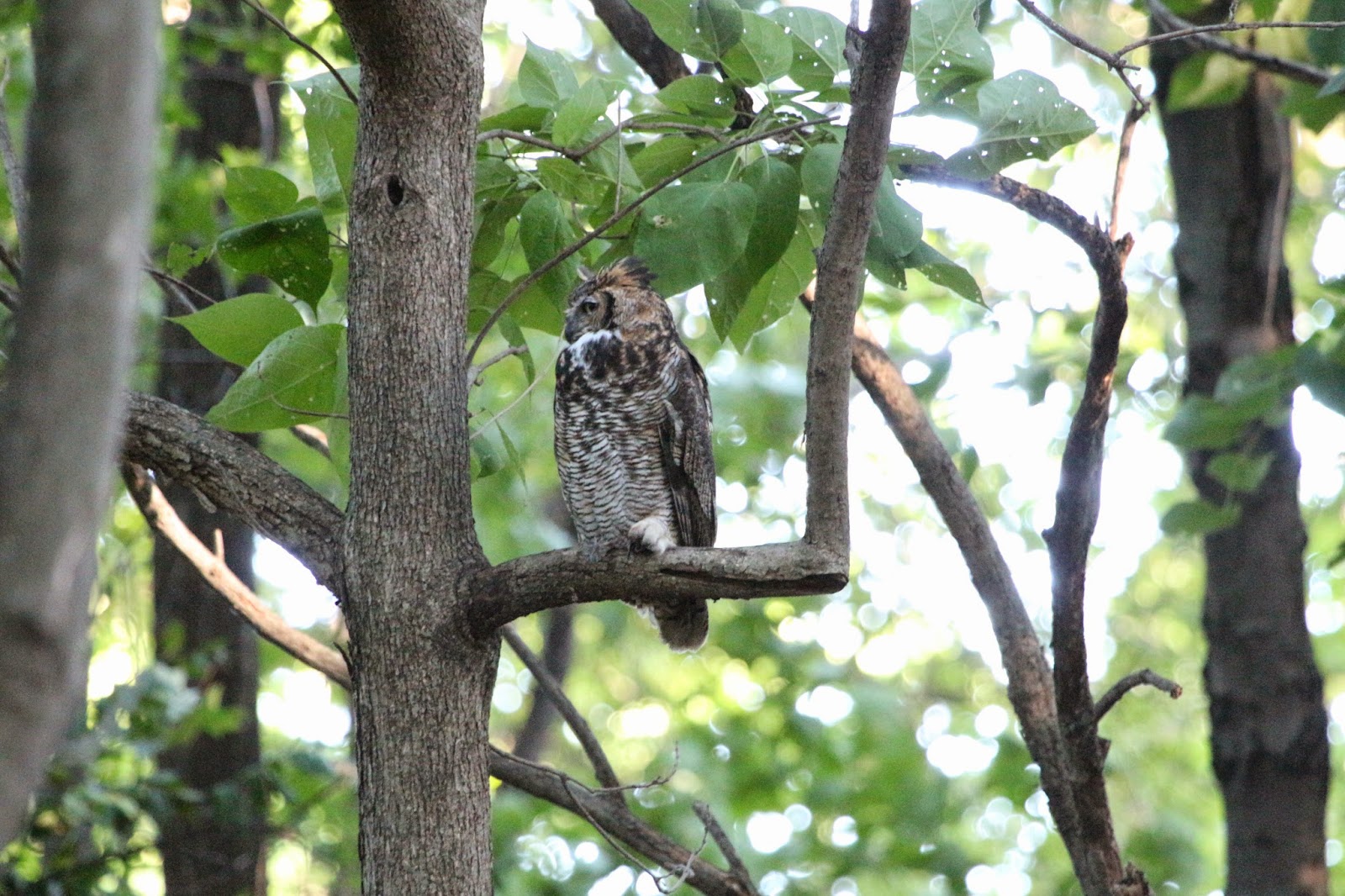 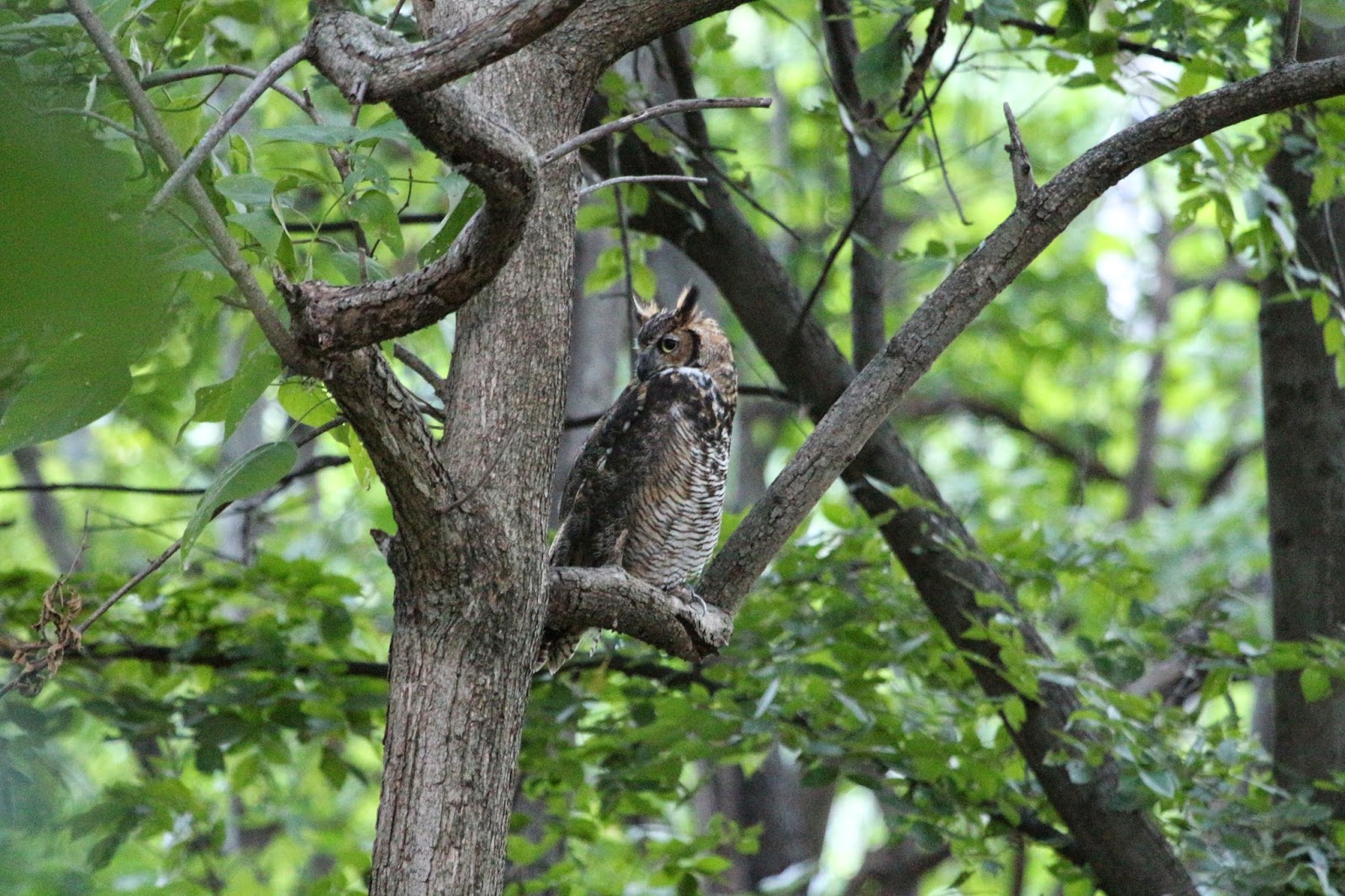 Continuing my search, I headed up into the western section of The Wooded Area.  The search took a while to bear fruit, underlining the need for patience and thoroughness when looking for owls and wildlife as a whole.  As I continue to watch the owls I am always amazed to see the similarities and variations in the owls' behavior both day-to-day and month-to-month as well as over the years.  Among these behaviors is where they perch/roost.  As with their parents you see patterns emerge and maintain while others dissolve; some permanently with others renewed. For example, last year the owlets, Lawrence, Edward and Stuart, used a hitherto unnamed tree so much that I had to name this tree.  It was dubbed The Sandwich Tree due to its spot right between three other more consistently used trees: The Big Dead Tree, Sarah's Late Summer/Early Fall Perch and The Window on the West Tree. This year I have seen an owlet in The Sandwich Tree less than five times. But this does not mean that I do not look in this tree each time I look for the owls. Quite the contrary, I look in this tree almost every time.

Finding all of the owls is my initial goal each time so learning their perching/roosting sites is essential.  I am often asked "How do you find the owls?" I respond by saying, "ESL. Not English as a Second Language but Experience, Skill and Luck."

Another phrase I try, but not always succeed, to follow is: Open Eyes, Open Ears, and Open Mind.  The Open Mind portion of this phrase is the hardest because we fall into patterns, which can become ruts even at our most vigilant.  I endeavor to keep my mind open to new places to look as well as looking at previous perch/roost sites that have not been used for some time.

Thankfully, on Sunday I followed my maxim and found the youngest owlet on a low, thin branch at the base of The Window on the West Tree (Henneth Annun for fellow Tolkien fans out there). 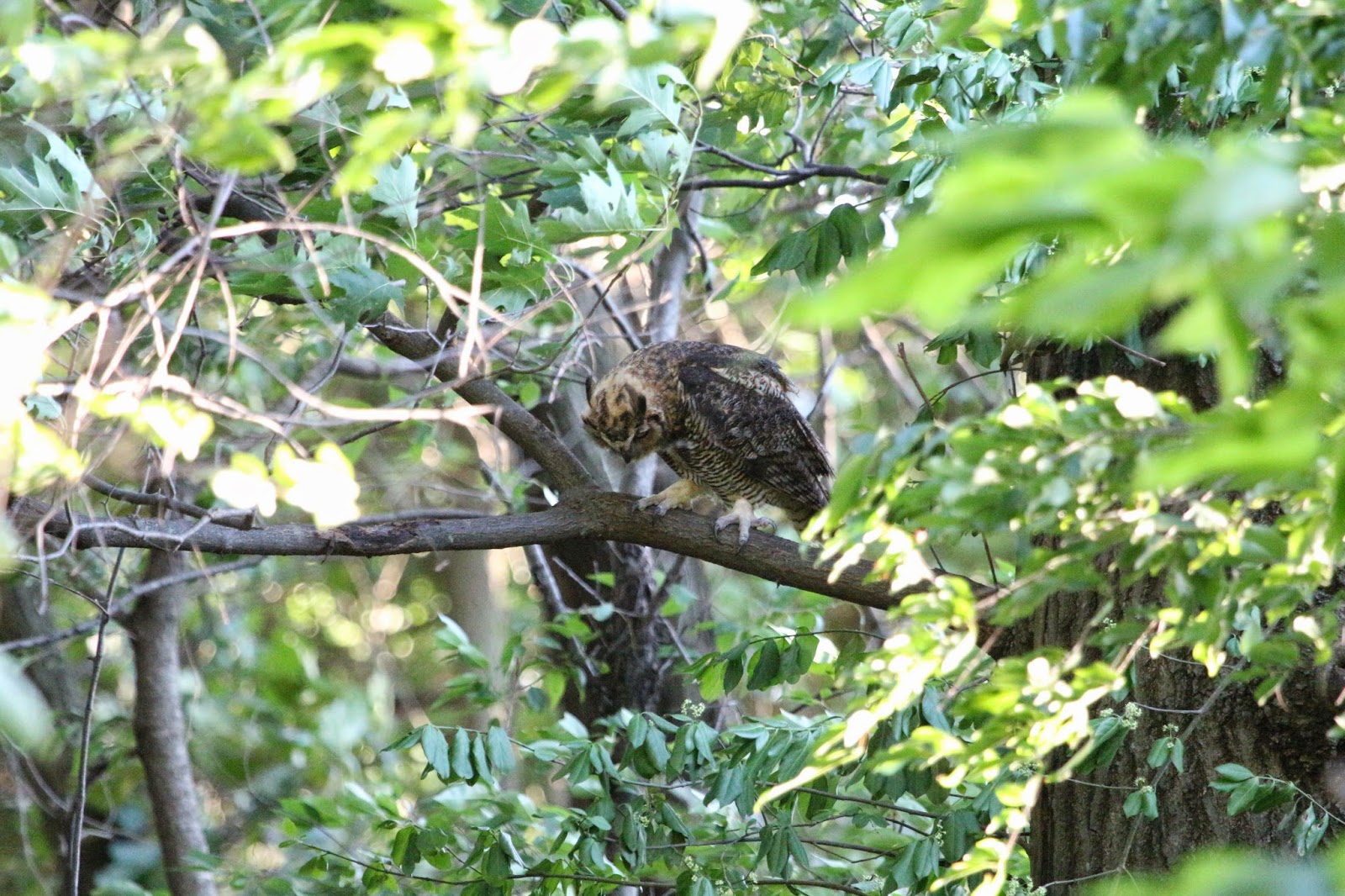 This branch has been an owlet perch for the last view years but I had not seen any owlet in this branch this year.  I almost did not look there but I remembered to look anyway.  Glad I did.  As I moved slowly and quietly to not disturb the owlet and to get a closer view, the owlet's gaze remained on the ground. 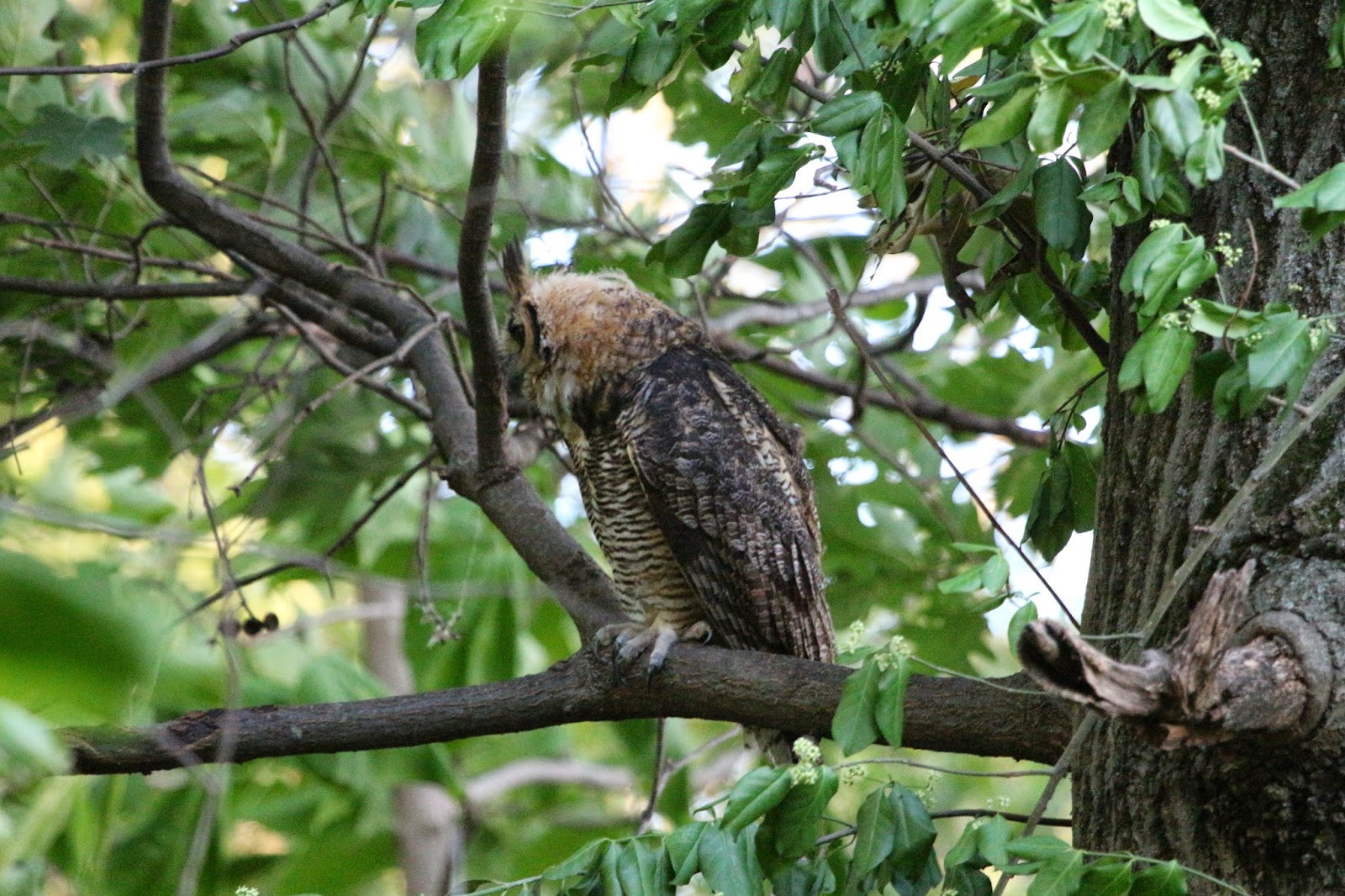 The owlets' hunting activity grows by the day and it is likely that he was on the prowl for a tasty bug or worm or even small bird or mammal.  The position of the owlet's gaze altered as it stretched its right wing using a move I call The Escalator Stretch.  As you watch the video below, the reason for this name may become clear.

At the end of the video the owlet noticed my presence but as you can see the picture below, he was pretty nonchalant. 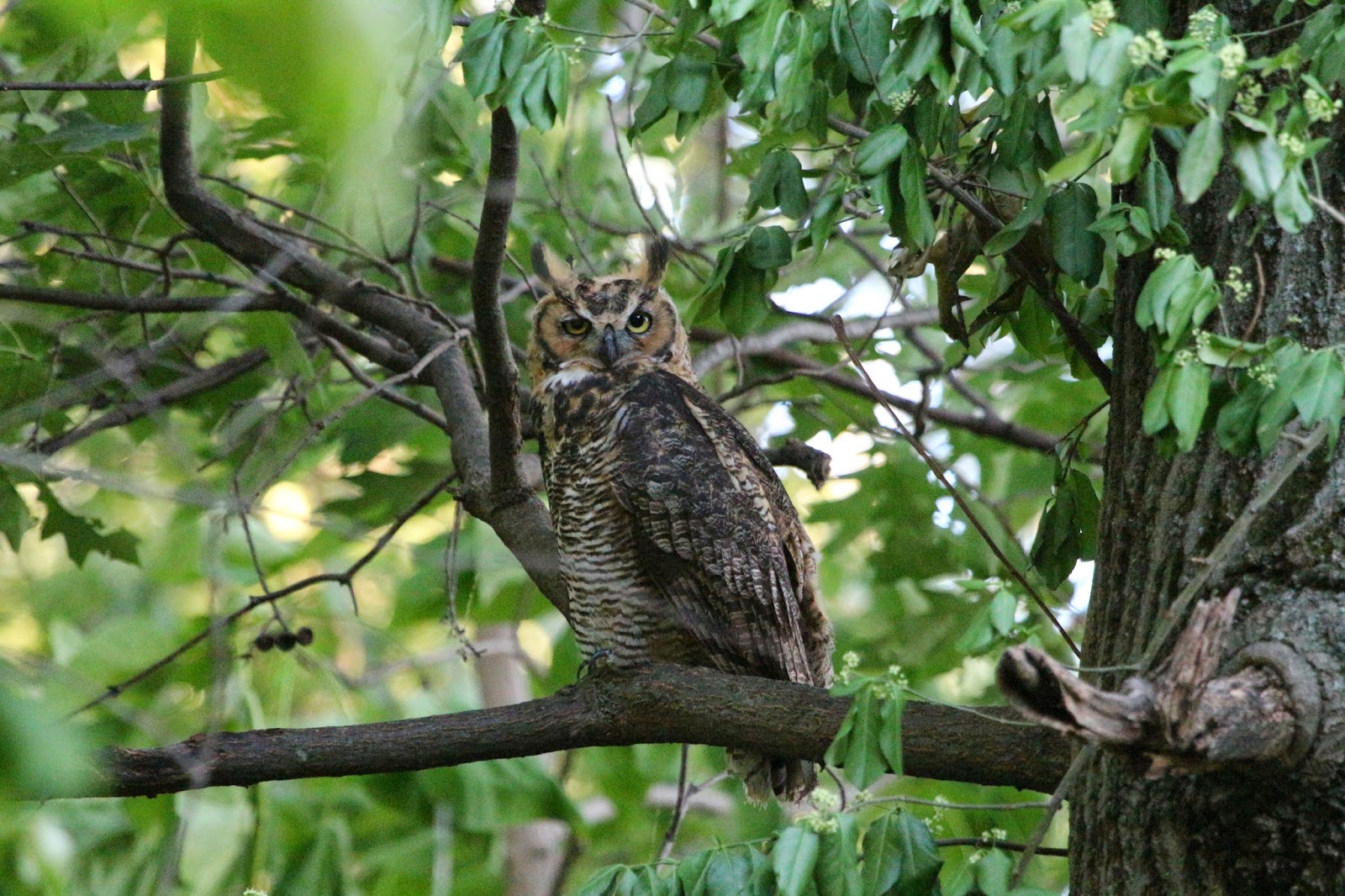 I hope this was because of how I dressed and behaved. I was dressed in dark, muted clothes, My blond hair was under a dark hat.  I moved slowly and quietly, the latter a challenge with the ground dry from the lack of rain. I did not get too close to the owlet and kept my time at close proximity to a modest length.