Close Encounters of the Bird Kind

Much is happening with the owls.  I last saw the middle owlet last Monday, September 8 and as it has been a week since then, I am making the call saying that she has dispersed.  Last week was the most challenging week with finding the owls I have experienced in years. To make a terribly long story short, I think Charles and Sarah are trying to make it hard for the last, youngest owlet to find them and thereby encouraging it to disperse.  As of last night, the youngest owlet is still in the park.

Most recently, the last two nights featured some interesting bird sightings and all in the same tree. The tree in question is The Jungle Gym Tree Near The Overlook Hotel Tree.  The owls use this tree primarily as a late afternoon/early evening perch site.  Last night, I arrived in the park and began to look for the owls passing by this tree early in my search.  After not finding the owls in several  spots, I returned to this tree.  There in the tree was a large bird and I could not identify it until I got my binoculars on it. The bird was an Osprey!  I had never seen an Osprey in Forest Park before now!
Check out this big beauty and notice the fish in his left talon. (Be sure to double click on the photos to see a larger version). 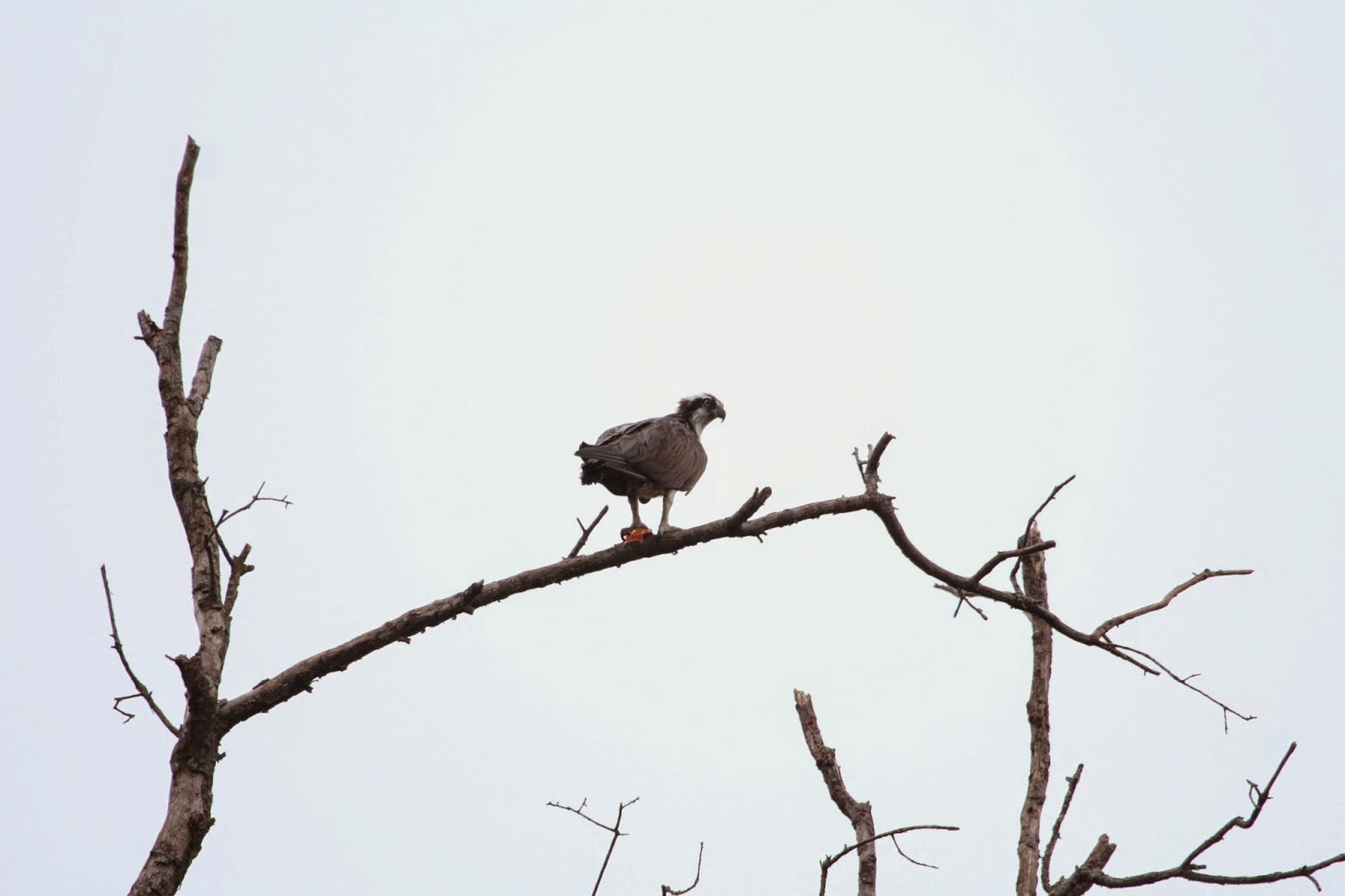 I knew an Osprey had been seen in the park recently, thanks to my friend Deepa Mohan's frequent nature walks in Forest Park and frequent blogging. Check out this post of hers for some nice shots of an Osprey in flight.  According to the indispensable Birds In Missouri by Brad Jacobs, Ospreys are an uncommon, migrant in this state. The equally valuable, Checklist of the Birds of Forest Park, lists the species as a rare migrant in the park.  I had seen Ospreys twice before in Connecticut during a visit there in 2009.  A bird with a truly global range, it can be found almost anywhere there is water and thus fish.  Forest Park's river way, ponds, lakes and creeks offer decent hunting for this species.  I saw this or another Osprey twice more last night including in this same tree a couple of hours later as I headed home. I hope to see this species more in Forest Park.  The massive, over 60 inch, wingspan is especially impressive.

One night earlier, in this same tree, The Jungle Gym Tree Near The Overlook Hotel Tree, was Sarah. I was leading the monthly, public owl prowl (the second Sunday of each month, pick up the flyer at the Visitor and Education Center for more information) and we had heard Charles near this tree and we saw Sarah in the tree.  Sarah soon had company when a Great Blue Heron landed in this tree mere feet away from her.  Sarah went into full alert mode with body clenched and tufts raised high as I have ever seen them.  I told the group to watch carefully to see what happened next as Great Horned Owls are known to attack and eat these herons. 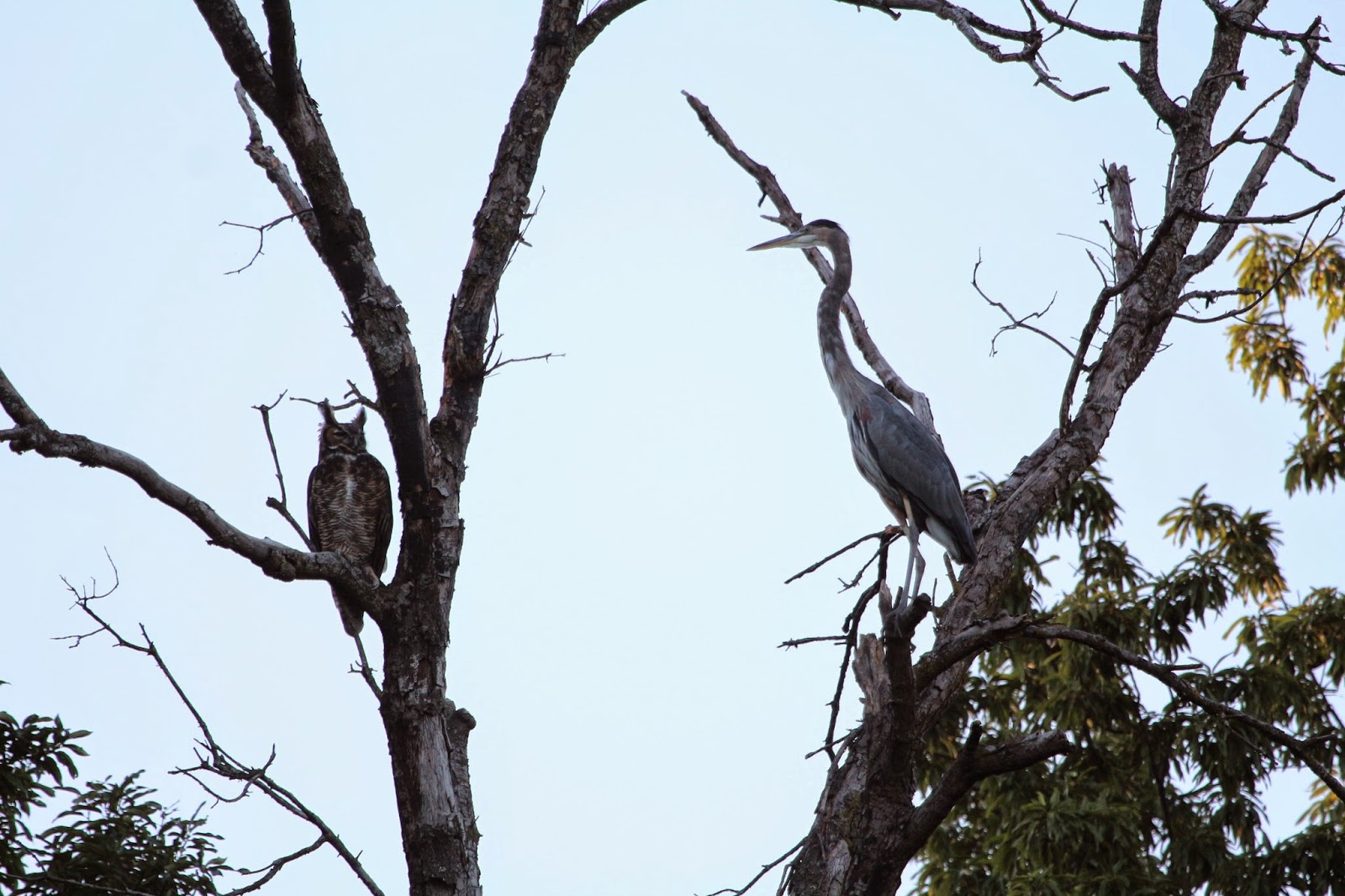 The heron remained in the tree for no more than two minutes before flying off without Sarah in pursuit.  I think if Sarah had been more awake and ready, she would have likely attacked this heron. Perhaps some of you are wondering if Great Horned Owls can really eat Great Blue Herons as the latter is twice the size of the owl.  This occurrence is well documented and I have seen several intense predatory attempts on GBHs by Charles and Sarah including the three below, which took place between October 2013 and March 2014.

Oh and Great Horned Owls are known to eat Ospreys as well. Check out this brief but fascinating article from the Wisconsin ornithological journal,  The Passenger Pigeon, for evidence of this.