After waiting, watching, hoping and predicting that mating was in the offing, Charles and Sarah mated last night!  It was the first time I have seen them mate for the 2015 breeding season! Fantastic! In the footage below, Sarah flies across the road starting from a large Cottonwood and landing immediately next to Charles in The Second of The Three Trees.  As soon as she landed they mated. Charles needed a moment to secure his spot but mating commenced with the owls making their high pitched call of excitement.  Charles then flew off west/northwest.

The mating took a while to happen and while I was confident that mating was in the cards in the next few nights, it never was a certainty last night.  In fact for a couple of periods mating was more in doubt last night than not.

The evening began with me finding one of the owls in Sarah's Autumnal Perch.  This well concealed spot sometimes requires finding and identifying the other owl and/or getting other angles on the occupant of this fall favorite. Whoever it was already awake and active executing an Escalator Stretch.  (Be sure to double-click on the photos to see a larger version of each shot) 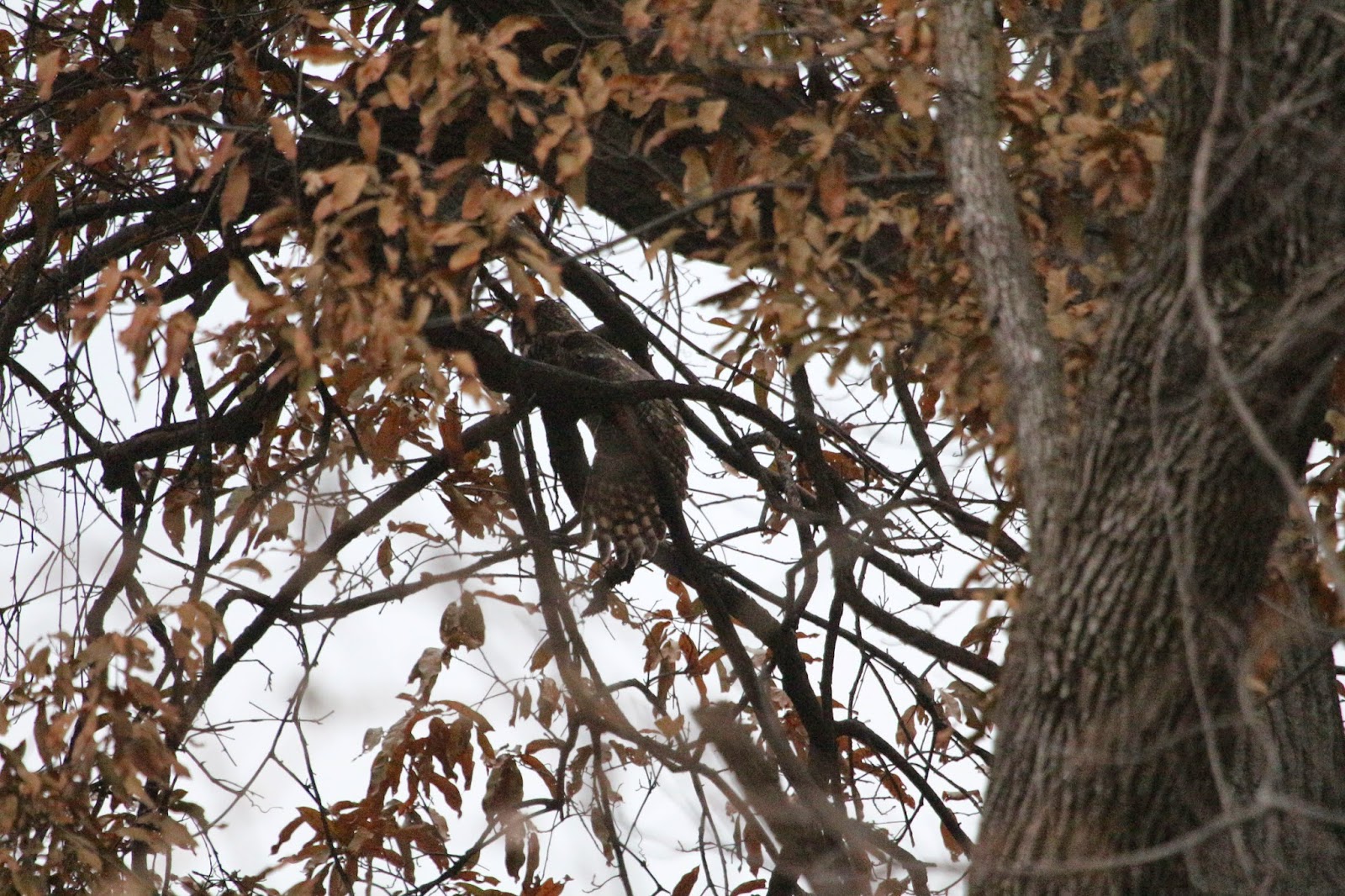 Nearby in The Tallest of The Trio Conifers was the second owl. 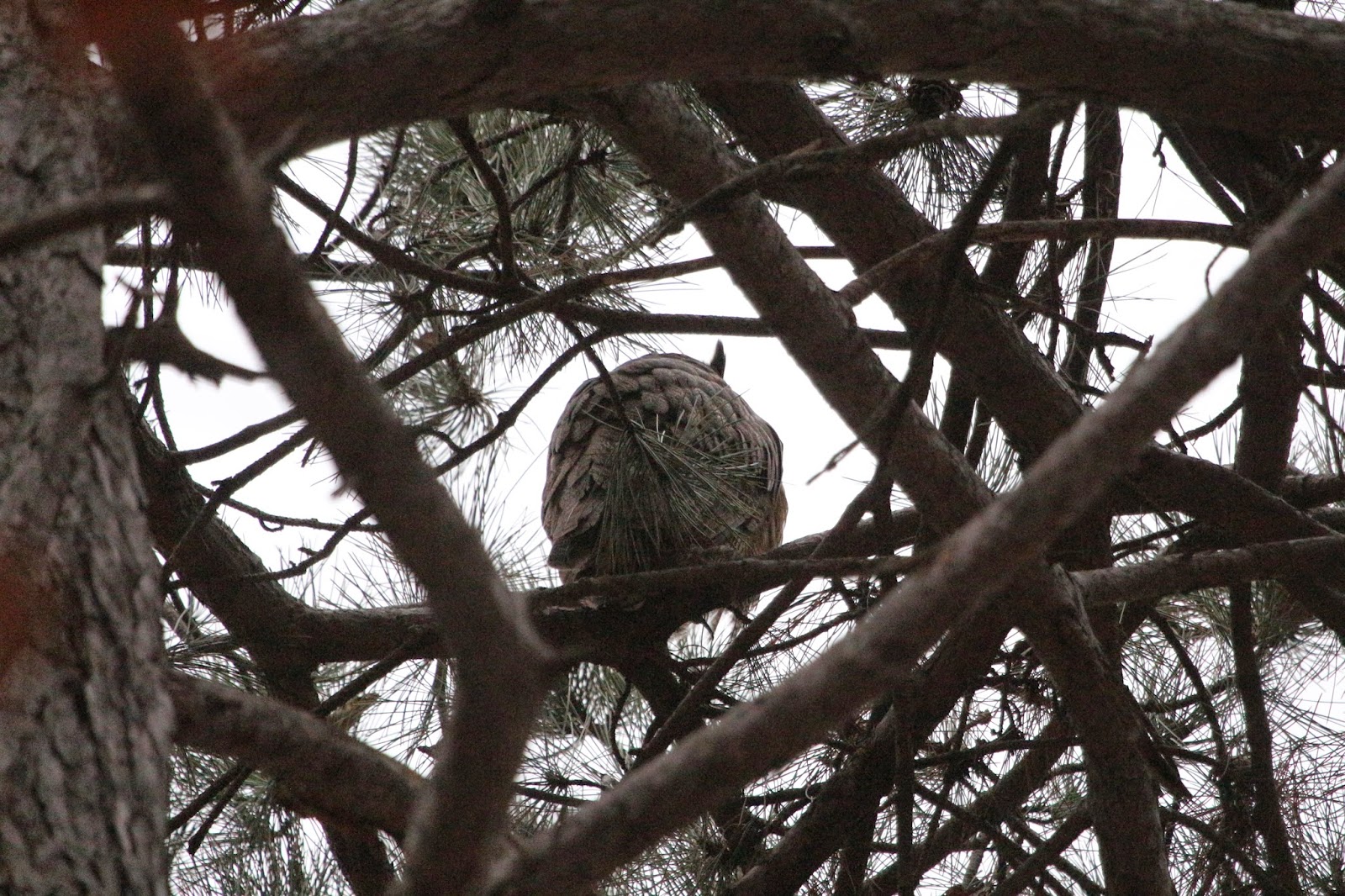 Just as I began to identify the second owl correctly as Sarah and thus Charles as the occupant of Sarah's Autumnal Perch, Charles hooted from this perch confirming his identity beyond doubt.  They engaged in a short, early duet before resuming their preparation for the evening. Charles was active with extensive grooming and stretching, including three Escalator Stretches and a Double-Wing Stretch.  In marked contrast, Sarah was quite still with the occasional turning of her head.

The American Crows commuting back to their rookeries noticed Sarah's slightly more exposed spot and began to mob her.  Sarah has used this tree a fair amount in the last few weeks and she regularly gets mobbed.  In contrast, if she or Charles are in Sarah's Autumnal Perch, they are not seen by the American Crows and are not mobbed.  What makes this especially interest is the vagaries in location and topography and the resulting difference in perspective between the crows and me.

As you can see from my shots  The Tallest of The Trio Conifers usually is challenging spot for me  to see and observe the owls.  The abundant and be-needled branches offer great concealment. The particular position of the tree on the middle of a hill typically limits how much of Charles and Sarah I can see and the places from which to watch.

Now while Sarah's Autumnal Perch is well-concealed spot, I can get multiple and better perspectives of whoever is perched there. The tree is on top of a portion of a hill but views from the side, the top of a higher part of the hill and from the bottom of the tree's portion of hill are all available to me. My shot of Charles stretching is from the side.  Here he is yesterday from the front as I stand between The Archy Tree and The AYU Tree. 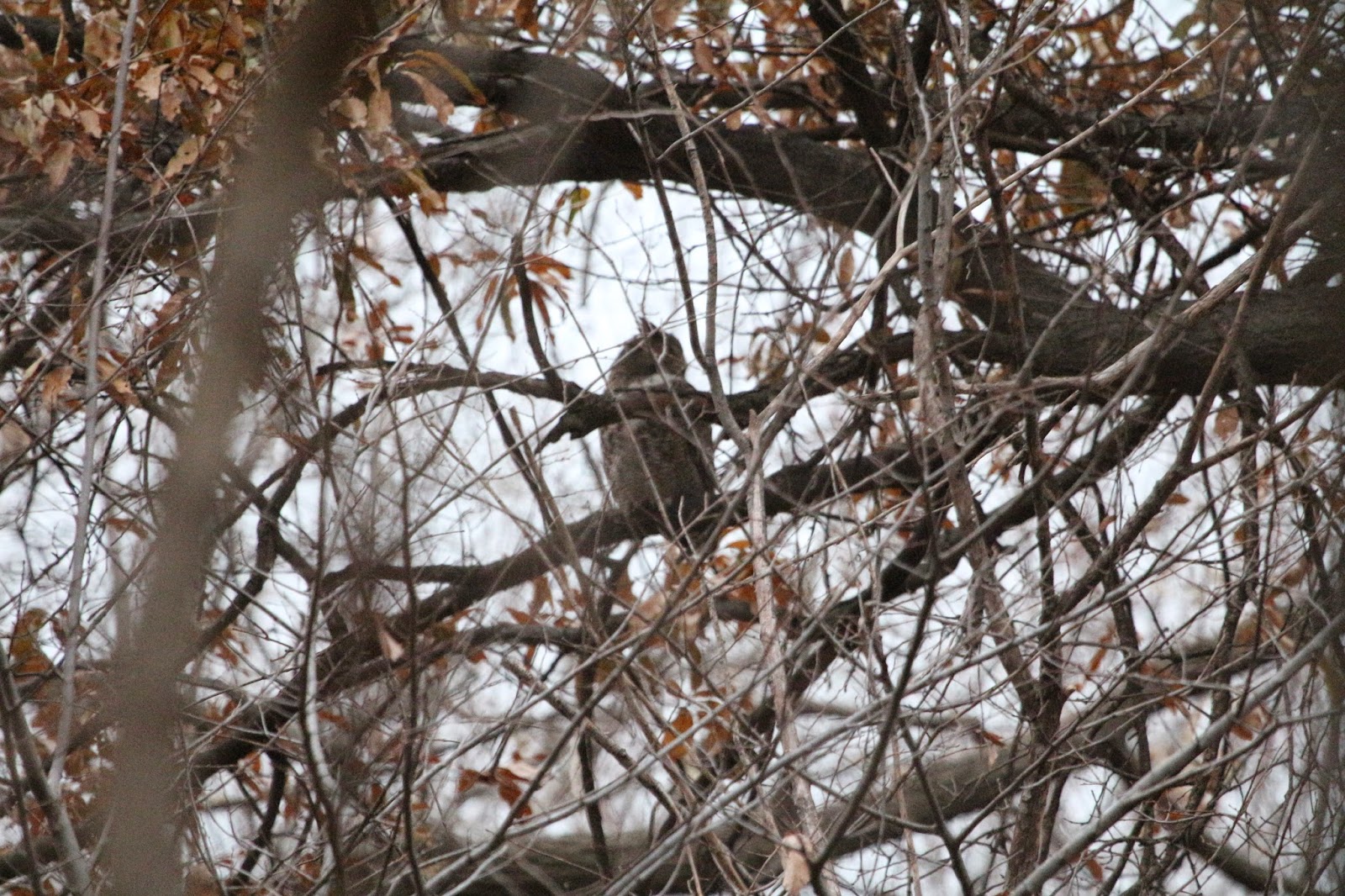 Here's Sarah on this perch on November 28 ejecting a large pellet while I film from the bottom of the tree's portion of hill.

However from the American Crows' airborne perspective, the situation is markedly different.  With their literal bird's eye view they can see more of Sarah's usual spot in The Tallest of The Trio Conifers but they cannot see Charles or her when perched in Sarah's Autumnal Tree.  Me with my equally literal boots on the ground perspective sees little of The Tallest of The Trio Conifers but much more of Sarah's Autumnal Perch.

As the mobbing came to the end I was joined by my friend and owl mentee, Rusty Wandall.   In the process of catching him up on the last few nights' activities, Charles disappeared on us! D'oh! I said that he may have gone down to The Arena and if not, hopefully he was otherwise nearby.  We stayed to watch Sarah.  She began to stir and even did an Escalator Stretch of her own. 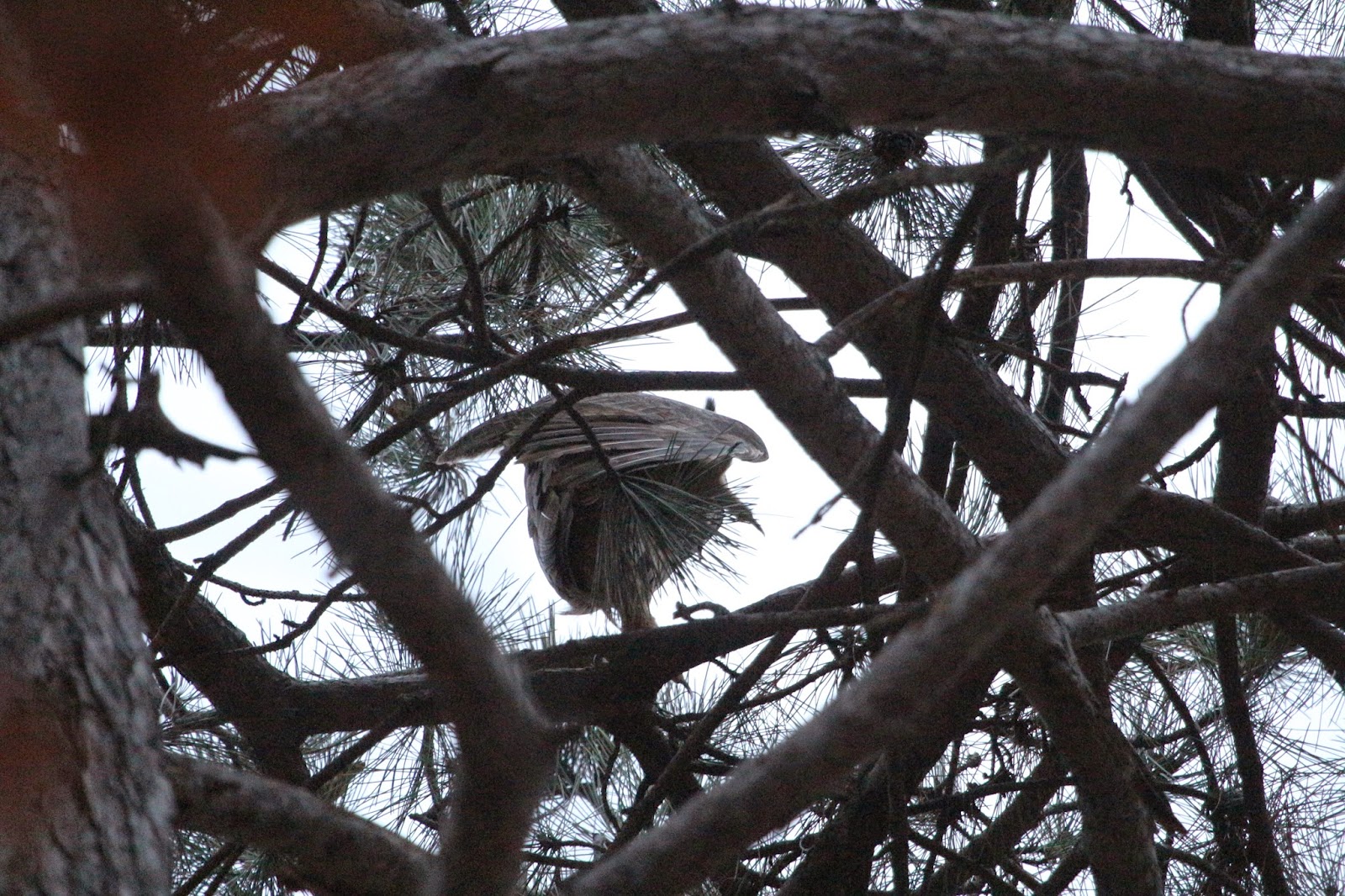 She flew off east landing 80-100 meters away in a large Cottonwood next to an arching row of Bald Cypresses.  We followed her and got a good angle on her while we looked towards The Arena in hopes of a sign of Charles.  Our hopes were soon rewarded as we heard him hoot.  I commented that he well be in The 11/13/14 Nest Hollow.  We inched forward to see try and see more while not loosing our angle on Sarah. I trained my binoculars on this hollow and there was Charles right inside of it.  I took the least worst photo I could of him and if you look in the hollow branch you can see a large white patch.  That patch of white feathers is Charles' chest and gular sac. 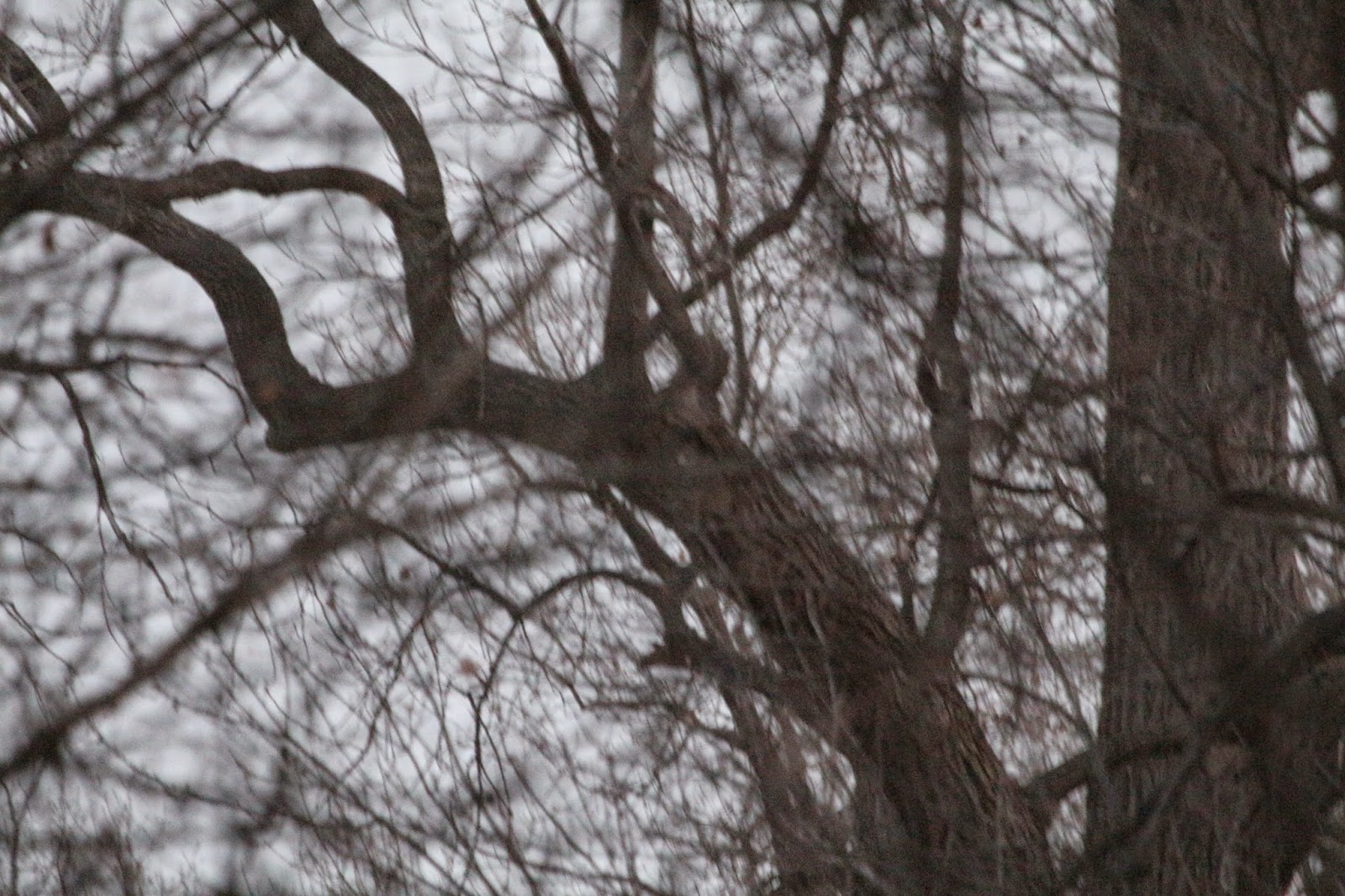 So why did I say that Charles might be in the hollow?  Well that's where I found him perched the day before; a hitherto unseen observation of him perching in this hollow before Sarah's nesting had begun.  On Sunday, Charles twice and Sarah once checked out this oft-used hollow. In recent weeks they examined in twice more.  I did not know that Charles had flown there but it was a decent likelihood given all this recent activity.

Charles and Sarah began to duet.  They were about a hundred meters from each other and the duet was solid if not intense yet.  The intensity grew as Charles flew towards her and us landing in the hollow in The First of Three Trees. Sarah quickly flew towards him and landed in a low branch next door in The Second of The Three Trees. Sarah was at roughly the same height as Charles and only 2-4 meters away.  The immensity of her presence and beauty there was astounding. 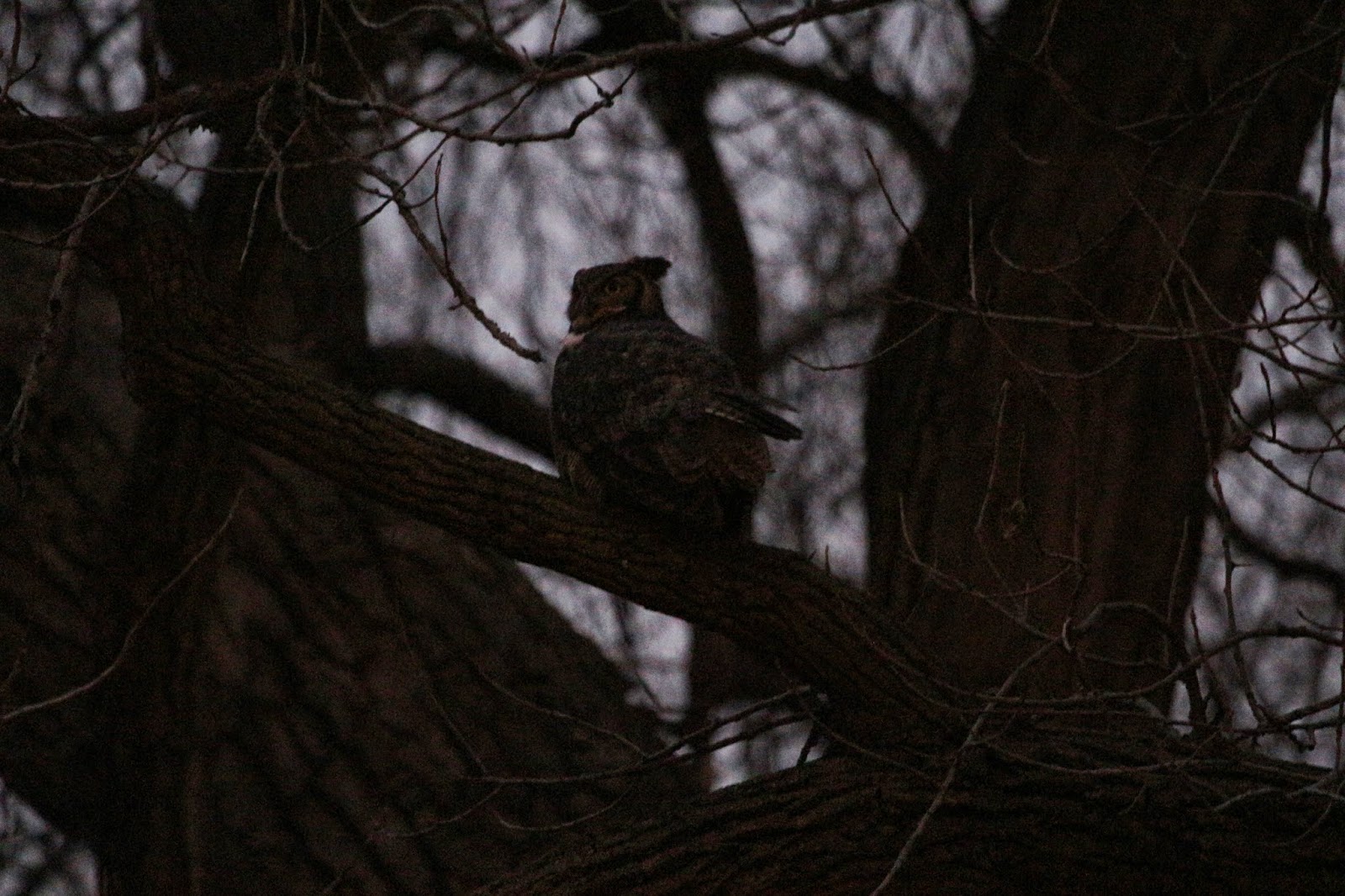 They duetted vigorously and Charles was scarcely visible as he went deeper into this hollow, 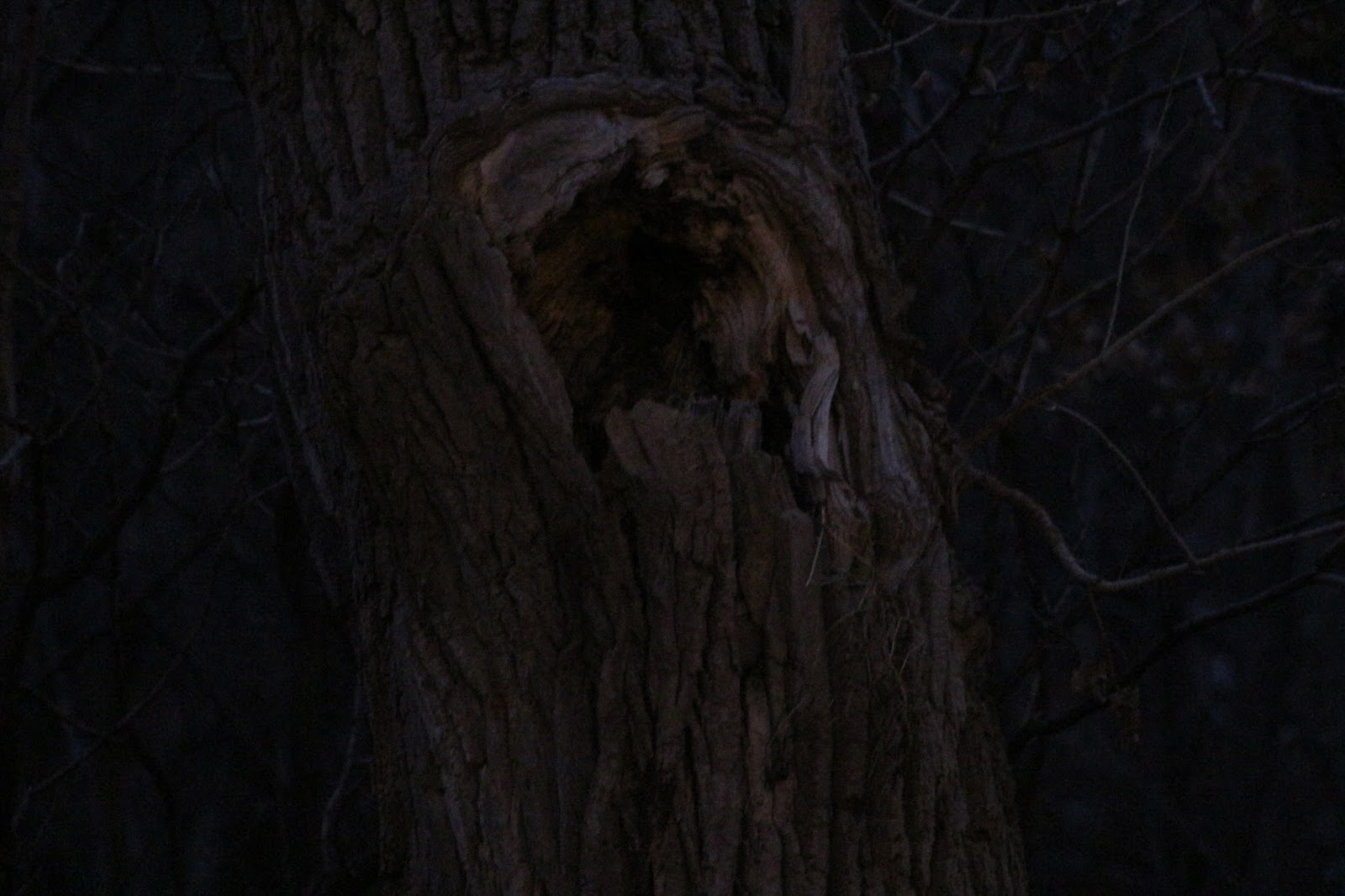 His hooting dropped off while Sarah's continued for a little while longer.  Charles stopped hooting as I have seen him do sometimes while inspecting hollows.  It is as if he goes from being a talkative real estate agent to a taciturn and detail-oriented home inspector.  At times this transition throws off the duet and mating does not occur and I feared this might be the case.

This was the third time I had seen them check out this hollow this year.  I hope that if all goes well and they nest that they do not nest here.  They began to nest here in December 2010 for the 2011 breeding season and I was hugely relieved when they changed hollows.  This hollow is low and too close to highly traveled areas by park visitors both vehicular and pedestrian.  If they nested here I worry about them being inadvertently disturbed by people and the people getting attacked by the owls as well as the safety of the owls and their owlets.

Sarah flew across the road and a creek landing high in another Cottonwood.  Several minutes later Charles did the same and they were both high up and 40-50 meters away from each other.  They began to duet sometimes mildly but other times with touches of intensity.  I kept wonder if it was enough yet for mating, which usually takes place at the peak of an intense duet.   Sarah flew but still landed not any closer to Charles by landing at the pinnacle of yet another massive Cottonwood at a greater height than Charles.

The duet continued and the intensity grew a touch more but still not to red-hot coal proportions.  Charles flew past Sarah landing high in The Second of The Three Trees at about the same height as Sarah's skyscraper perch.  I wondered aloud if he did this to be at the same height as her and if now he would go to her or vice versa.  She ended the question mark by flying to him, landing right next to him and them mating as you saw in this post's first video.

Rusty made a great comment by noting how relatively short and not especially intense the duet was but still they mated.  I complimented him on his observation and analysis.  I told him that yes, mating usually occurs at the peak of an intense duet but not always.  I have observed and documented Charles and Sarah mating over a hundred times since December 2006. I have seen them mate after a few early, mild hoots.  They have mated after a brief but intense duet that went from 0 to 60 in no time.  I said the duet has to be just long and intense enough for them to mate.  This also implies the context: day/time/weather/location, hungry, not hungry, etc

Soon after Sarah followed Charles with Rusty and me in pursuit.  They were actively hooting as they continued going west/northwest.  The duetting was fantastic.  It was great to see them take their show on the road, actively re-establishing their territory and re-cementing their pair bond throughout their territory.  Overall this fall and early winter I have not seen as much of this wide-ranging duetting as I usually do.  Only recently have I seen more of it. I am reasonably certain that this difference is due to the youngest owlet's late departure.

We reacquired them several times. Here they are together in a glade of Sycamores. 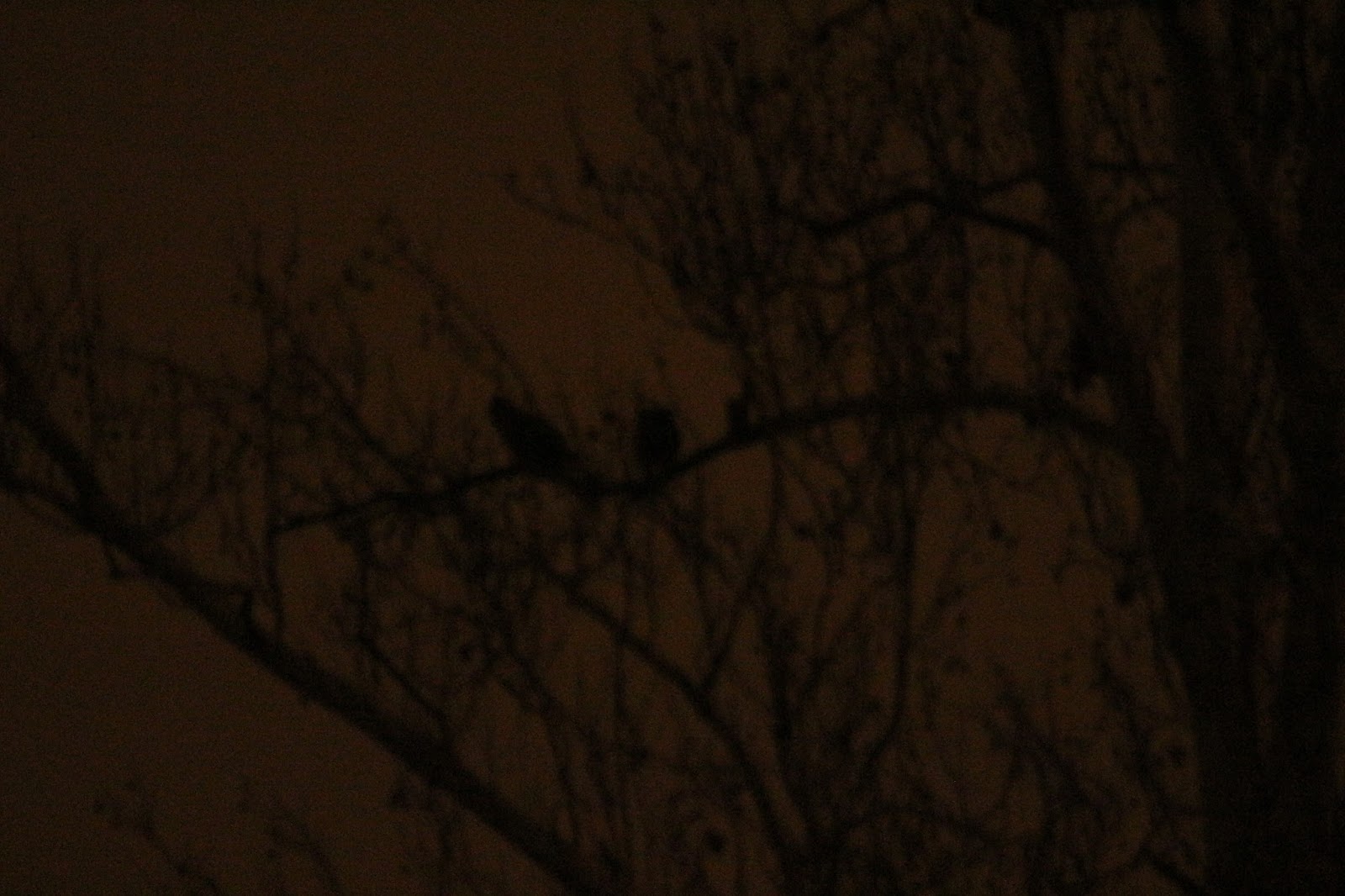 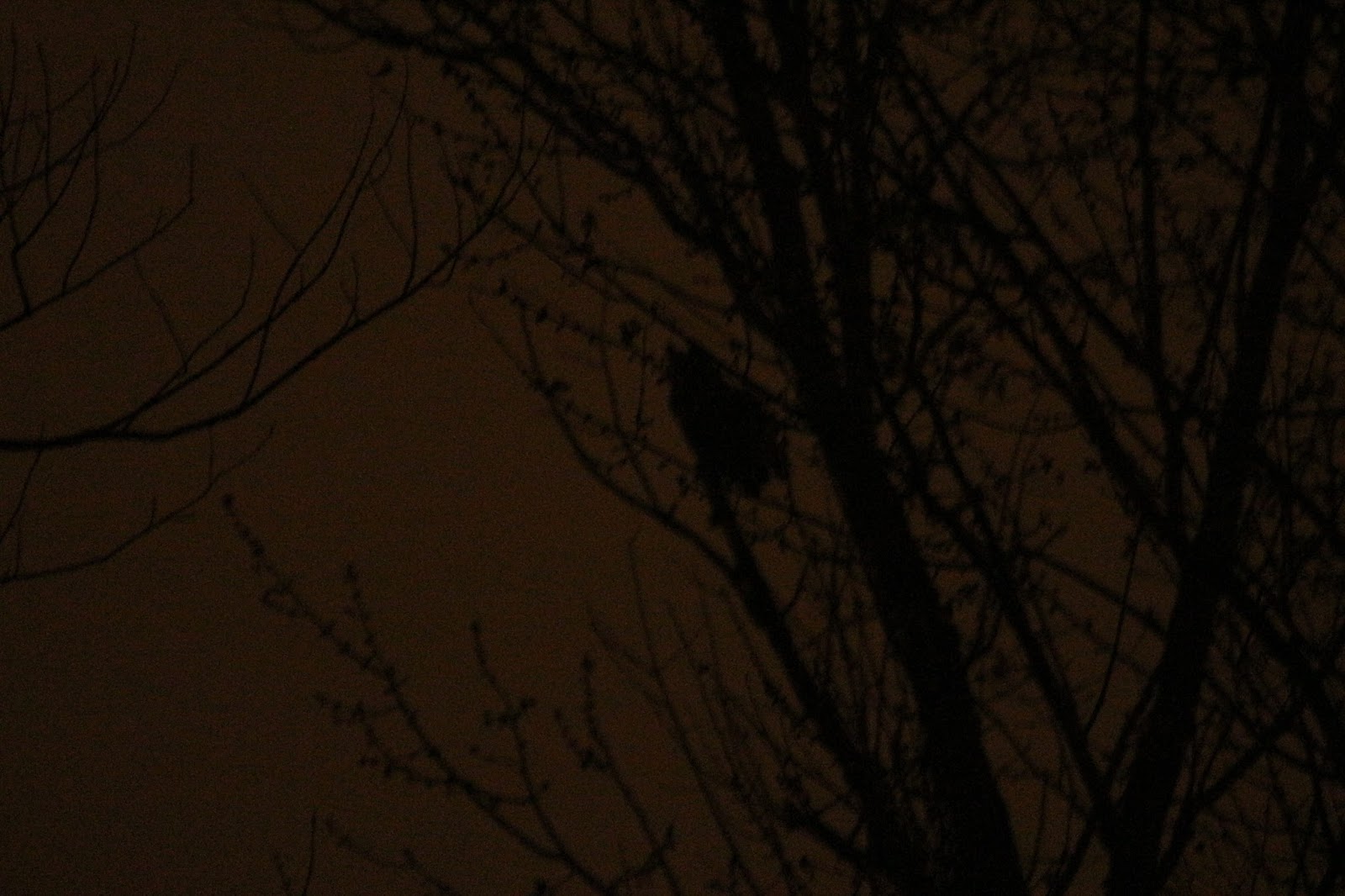 Sarah perched in low conifer about 50 meters from Charles. 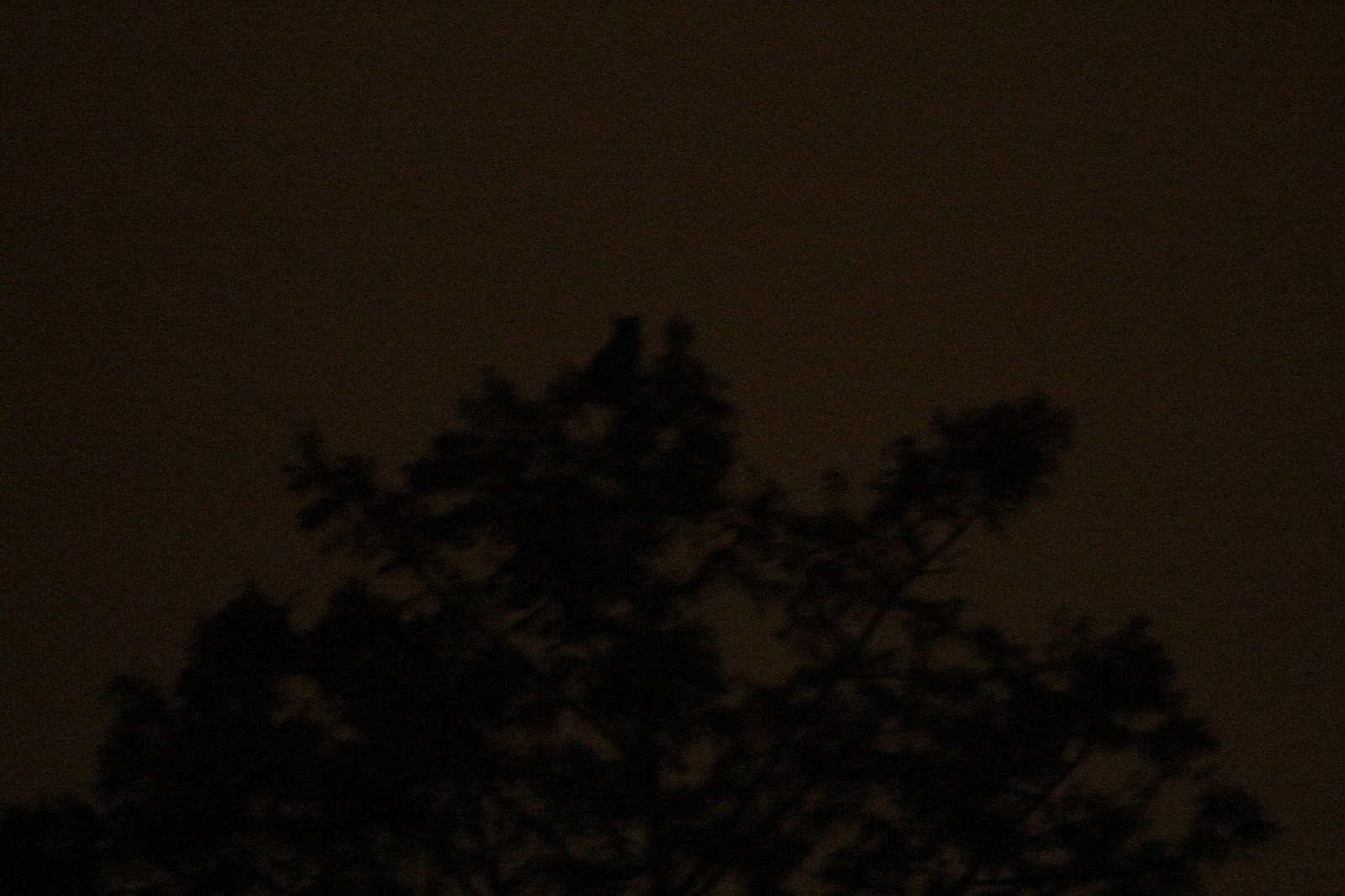 Charles flew past Sarah landing high up in a Bald Cypress. 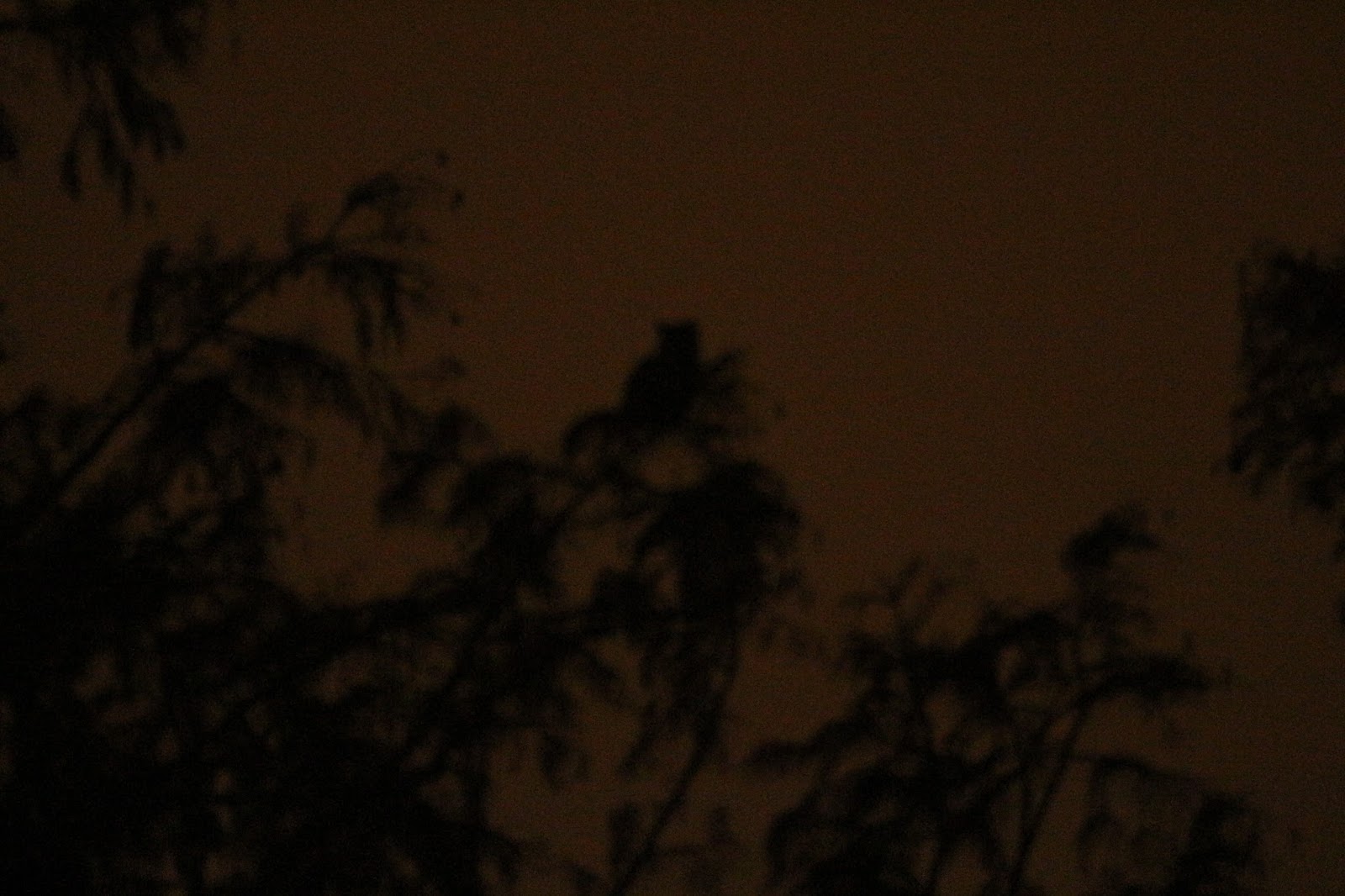 Sarah flew off further northwest and Charles pulled another disappearing act on us.  Thrilled with what we had observed we headed back to our vehicles and homes.

Thank you for reading!
Posted by Mark at 3:20 PM