The Last Owlet Throws In The Towel(ette)

I am making the call.  The youngest owlet has left Charles and Sarah's territory.  It finally happened. It has been a long time coming for this owlet to finally disperse.  The owlet is incredibly late in dispersing.  To put it in context, the 2013 owlets and the 2014 owlets hatched at the same time, early to mid-February.  The youngest owlet of the 2013 clutch was last seen on September 17, 2013.  I last saw the youngest owlet of the 2014 on Thanksgiving, November 27, 2014.  Here he is on that night, perched in one of The Crossroads Conifers, a spot he had used a few times that week.  (Be sure to double click on the photos to see a bigger version). 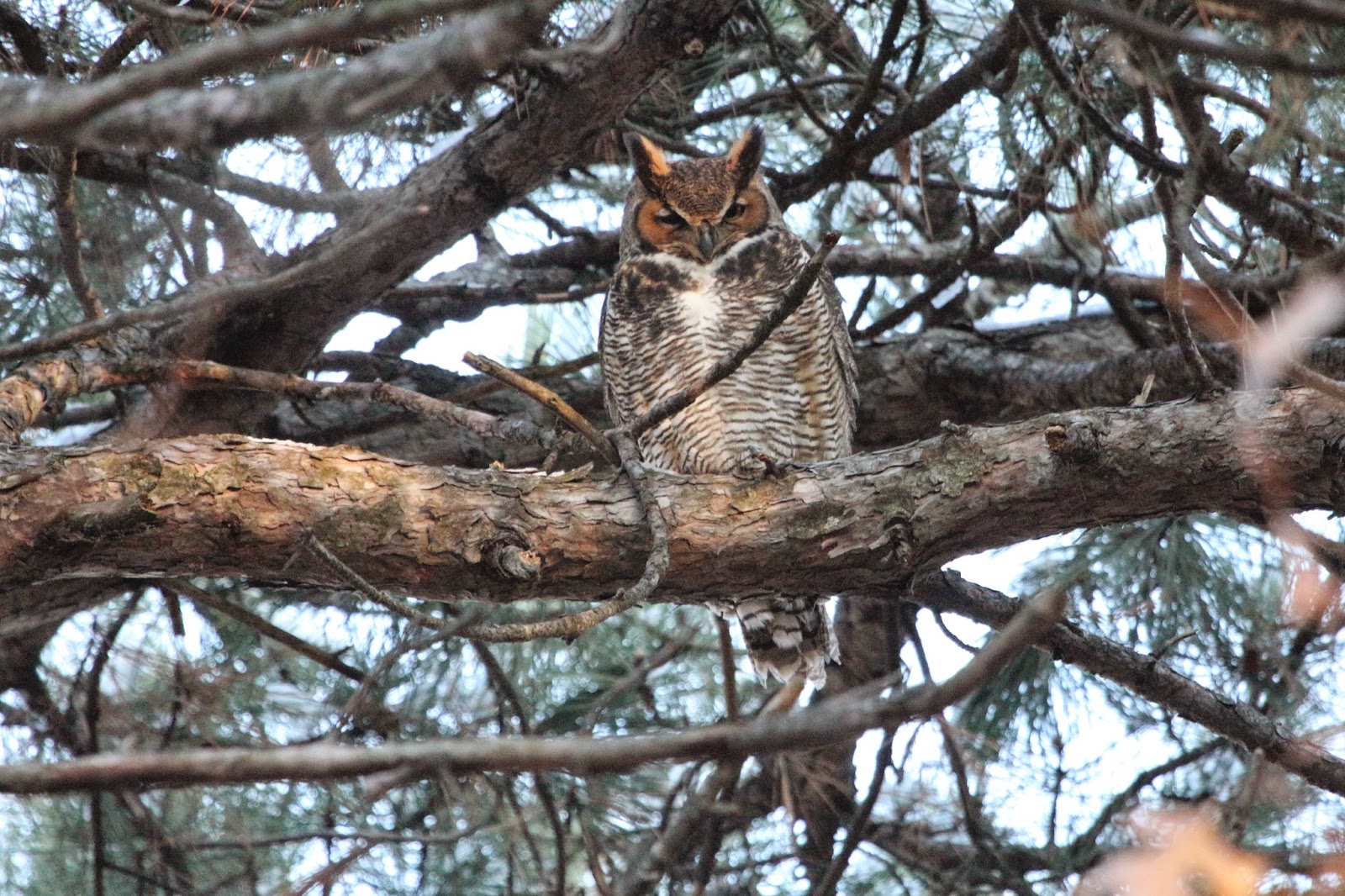 A beautiful owlet that looks a great deal like Sarah from the neck down and like Charles from the neck up so much so that sometimes IDing them all was challenging at times.

At my recent talk on the owls' mating, nesting and owlets at the Mid-County branch of the St. Louis County there was a whiteboard in the room and with my complete lack of all but the crudest drawing ability, I drew a diagram of these changes in the owls' perching/roosting sites.  Despite my worst efforts, the diagram helped make this impact palpable and not just to the owls.  I have recreated this below with a few extra labels and such. 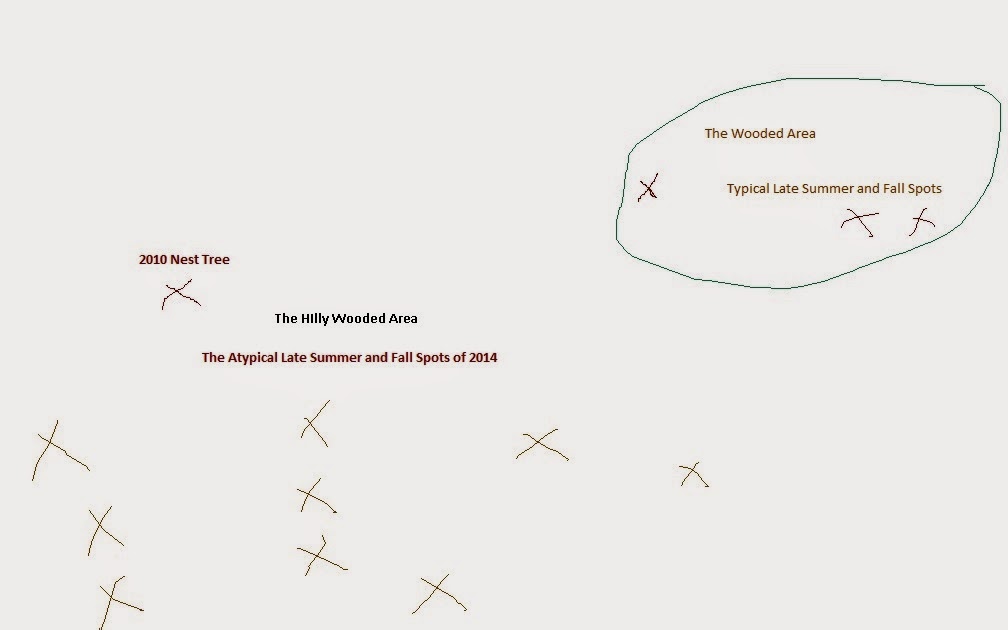 Prior to this period, I had only seen Charles and Sarah use this area for daytime perching when she nested there in 2010.  Not only that but we had a few periods when Charles and Sarah could not be found for a day or two.  These disappearing acts occurred before this but not as frequently.

This owlet begged throughout its whole time with the parents. I often found the owlet first vocally and then visually.  Charles and Sarah stopped feeding it probably in August but still it stayed and begged.  On numerous occasions it interrupted their duetting. I saw them chase the owlet twice.  The first time was unmistakable: the owlet flew off with Charles and further back, Sarah, in pursuit.  The second time was intensity made flesh and feather.  Charles and Sarah all but assaulted the owlet as they did their best to drive it to disperse.  While it seems a tough thing to do, owlets must disperse to maintain healthy populations of owl prey and deep, rich owl gene pools.  Even with this chasing, the owlet remained.

Not only that but I would have hints that the owlet had left only to find him once more. I would not see him for one night and begin my countdown only to see him the next day.  I had two separate four night periods when I did not see him and I thought that he might be gone but each time I found him again.

As the days and weeks ticked by and the impact on Charles and Sarah's behavior continued I had two concerns.

1. The owlet was developmentally lacking and that this not bode well both in the short and the long term.

2. The owlet's continued presence might impact Charles and Sarah so much that they may not mate and/or nest.

These concerns continue but thankfully the second concern is diminishing.  Charles and Sarah's duets have increased in intensity and I think they could mate any day now.  I have also seen them check out a few potential nest spots including the 2011/13/14 Nest Hollow. Here they are in mid-duet last night. Such a treat to see this. (Charles on the right, Sarah on the left) 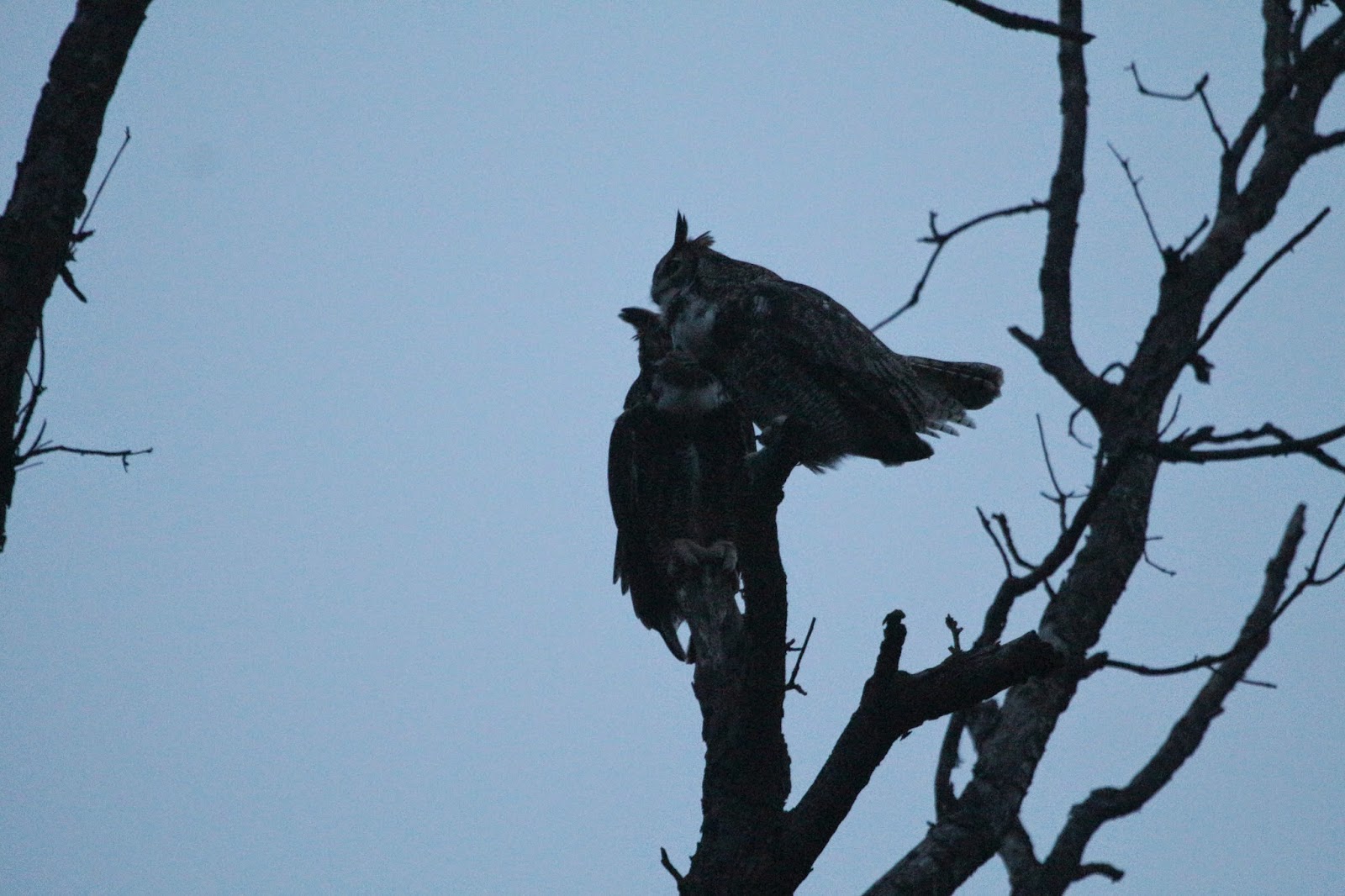 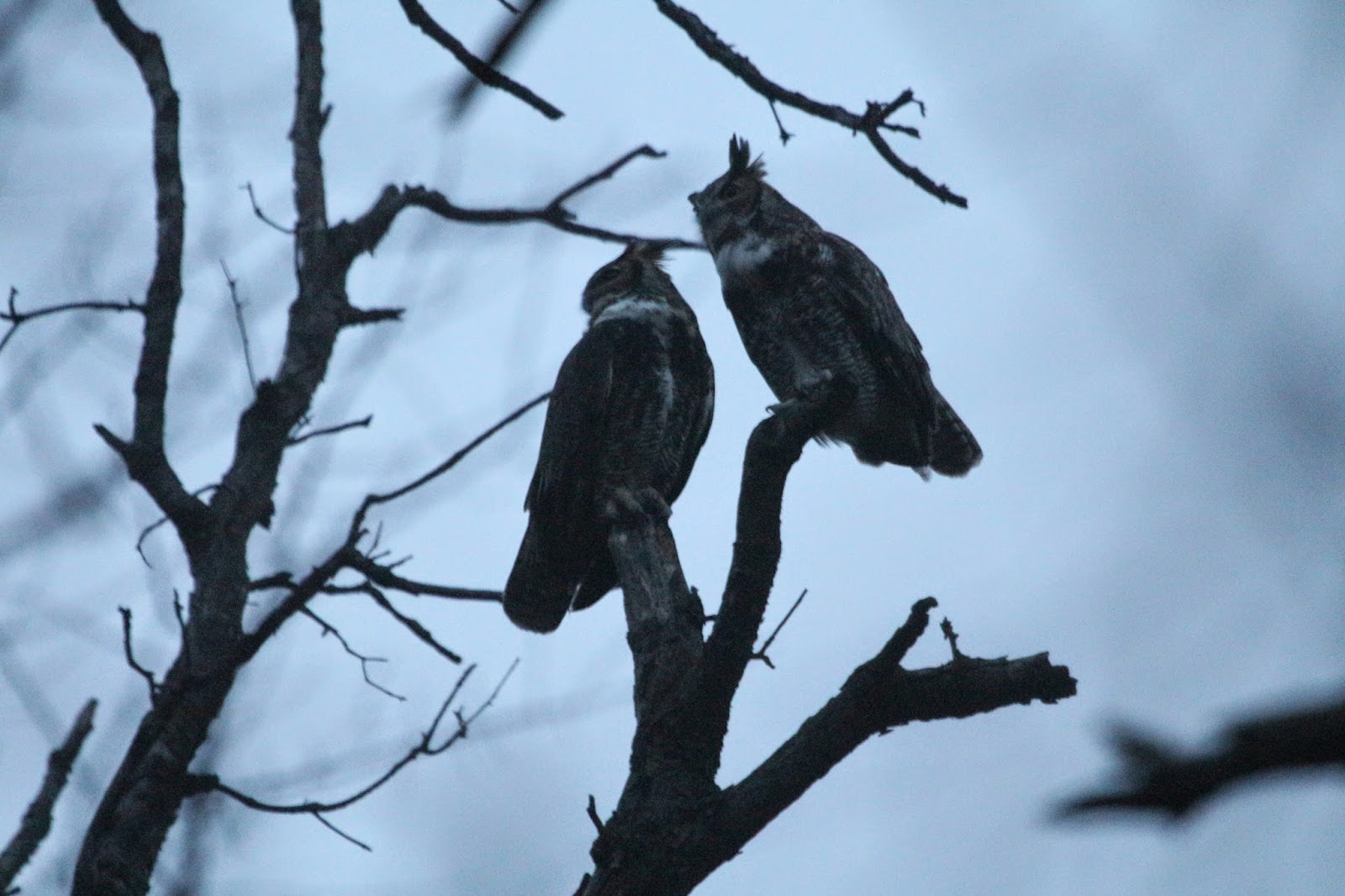 With any luck the owlet will survive and thrive and my next post will be about Charles and Sarah mating.  Thank you for reading!
Posted by Mark at 2:47 PM