Mating Owls Have A Merry Christmas!

After two rain-drenched days on December 23 and 24 filled with a great deal of Christmas shopping and no visits to see the owls, I was eager to return. We had some slight snow flurries in the morning and early afternoon, not enough for a truly white Christmas but enough to add an extra special touch to the day. After a great morning of presents (including several owl-related ones) and nibbling, it was time to go the park and see the owls. 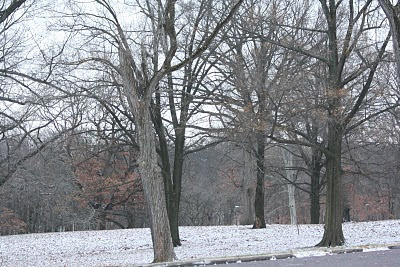 I headed to the The Quintet Conifers but did not find anyone there. I wondered if it was time for the Thanksgiving Owl Mysteries to morph into the Christmas Owl Mysteries. The snow returned and in picked up in pace causing me to deploy my umbrella to provide a layer of protection to my cameras and optics. I decided to look next in The Mixed Glade and The Middle Conifers. I had just started in that direction when I realized I should check The Crossroads Conifers while I was in the area. No sooner had I changed my direction, then I heard Charles hoot from the vicinity of these recently named conifers.

Sure enough, I found an owl in The Crossroads Conifers but it was too obscured to get a positive identification. I saw flashes of Charles and Sarah but nothing definitive. After some more observation, the owl flew out of this glade of trees and landed in the top part of the tall dead tree in The Quintet Conifers. Its position at the top of this conifer looked the owl statue we at the top of our Christmas tree. Now in this exposed spot, I could tell by its dark plumage and massive size that it was Sarah. 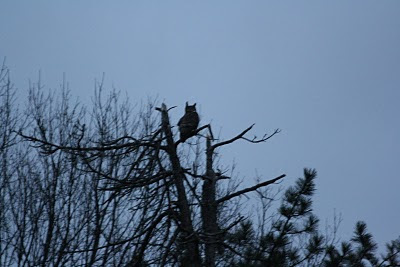 I thought it was more likely that it was Sarah who flew out of The Crossroads Conifers. I have only found Charles in these conifers a couple of times but I have found Sarah there about ten-fifteen times over the past two years.

While I was glad to see Sarah, I wondered where Charles was especially as I heard him hoot. I did not have to wait long to find him. He hooted from The Hilly Wooded Area and I found him in a deciduous tree not far from The Crossroads Conifers. I know I had not looked carefully in that area so it is possible that he had been there and I had not taken notice. 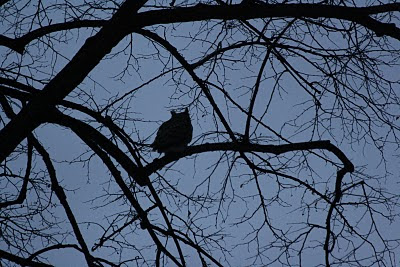 I was happy to find both of them and just as I watch Charles, Sarah flew over and landed next to him, mere feet away, on the same branch. They duetted briefly before Sarah flew dove off the branch flying south. If Sarah had not left, I would wager that there was a good chance that they would have mated right there.

Charles began to hoot loudly and frequently, about once every thirty seconds. With his hoots competing with the strong wind, the neighborhood Eastern Grey Squirrels took notice. Their warning cries filled the air and one squirrel that was on its way to the tree in which Charles was perched managed to re-route its path sufficiently to avoid Charles.

He continued to hoot for a while longer before he defecated. In my observations of these owls, defecation is an almost guaranteed precursor to flight and fly Charles did. He flew a modest distance to a tree close to The Possible Nest Tree. His hooting continued undiminished. Judging by the muffled responses from Sarah, she was in the snag/hollow of The Possible Nest Tree.

This was not the first or last time that I have heard the muffled sounds of Sarah hooting from within a hollow. I call it diva duetting. It is as if Sarah is some great operatic diva like Maria Callas, Joan Sutherland or Kelly Clarkson. She refuses to go onstage due to some minor mishap but she still insists on performing for her adoring public. Unfortunately, on this night it was sufficiently windy that while I could hear her, the recordings I made did not pick up this diva dynamic. I always enjoy hearing diva duetting, as it seems to illustrate the deep bond between these two remarkable owls.

The deep bond between them was even better illustrated by what happened next. Sarah flew north out of The Possible Nest Tree and landed in a branch quite close to me; about fifty-eighty feet horizontally and about fifteen to twenty-five feet vertically. Charles did not waste any time. He flew over to this branch but instead of landing on the branch or elsewhere on the tree, he landed on Sarah's back and they mated!! Listen below at the twenty-nine second mark for the high-pitched sound that Charles makes when they mate:

Charles flew off west/northwest and it almost looked like he flew right down to the ground but instead he disappeared from my site within moments. This was the sixth time I had seen them mate this season, six times in fifteen days, and the first time I had ever seen them mate on Christmas! The very first time I saw the owls mate was on Christmas Eve 2006. Must be the mistletoe...

It became time for Sarah to depart, which she did in a northeasterly direction. I found her only a short distance away still in The Hilly Wooded Area. She groomed for a short while before continuing in the same direction. I reacquired her in the same tree, just slightly higher up, as I had before prior to her joining Charles, on the tall dead tree in The Quintet Conifers. 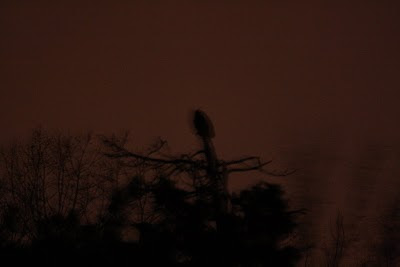 She did not stay long and went bombing off north. I went looking for her and Charles for a little while, hoping to spy them in some of their favorite spots in the around the road and the lake. My luck ran out but I was more than thrilled to have seen what I had. After many amazing things witnessed this evening and Christmas dinner in the offing, I headed for home to feast upon Wendy's superb meal of roast beef, creamed spinach (of the gods), and a great three-berry pie from our amazing local bakery, Sugaree Baking. A very merry Christmas indeed!
Posted by Mark at 1:34 PM