What Is Charles Doing While Sarah Is Nesting?

Charles is on full-time hunting duty. When the eggs hatch male Great Horned Owls are known to hunt, hunt and hunt some more until the nest overflows with food. This is not always the case but some remarkably prey-filled nests have been observed over the years. One such nest was described in Life Histories of North American Birds of Prey, Part 2. Owls by Arthur Cleveland Bent, a giant work by one of the giants of American ornithology. The nest contained remains of:
All of which weighed over eighteen pounds! I have seen this portion of Bent's work quoted in numerous books on owls. I first read it in Great Horned Owl by Dwight G. Smith. If I had to recommend one single book on the species, it would be this one for its concise, informative text and brilliant pictures. I have not seen evidence that Charles creates a veritable Sam's Club of prey items for Sarah. That said, having seen them raise eight owlets in four years speaks well to his hunting abilities.

On Wednesday, January 13 Charles flew off west/northwest. I reacquired him in a low branch of a tree near the wooden bridge that connects The Grand Basin with Picnic Island (last year I reacquired him one night on this bridge's railing-breathtaking). I was quite chuffed to see that he was sitting in the tree with a small rodent in his bill. He flew back in the direction of The Nest Tree; undoubtedly bringing his prize to Sarah just over twenty minutes since he had left the vicinity of The Nest Tree.

One of the interesting aspects about this season's nest tree is that it within a dense population of Eastern Grey Squirrels. In fact, I am reasonably certain that there is a squirrel nest within The Nest Tree itself. Throughout much of the owls' activity in the area, the air is filled with squirrel warning cries. I have seen both Charles make numerous predatory attempts, none successful so far, on these squirrels. I have seen Sarah make a few predatory attempts on Eastern Grey Squirrels on milder days. I hope this a reflection of her taking advantage of the warmer weather to have some more activity and perhaps keep her hunting skills sharp and not an indicator that Charles is not providing enough food. Here's Charles making a predatory attempt on a squirrel on January 6, 2010, one of five he made in a span of five minutes that day:


Charles has been fascinating to watch but not without his challenges. His daytime perch sites varies between his favorite conifer and a few different deciduous trees close to The Nest Tree. On Monday, January 25, he was in an unusual but not unprecedented spot in the middle of a large cypress that made him look like a Christmas tree ornament. When he his in his favorite conifer he transitions from out of The Woody Area to trees close to The Nest Tree. Sometimes he stops at an edge of The Wooded Area near The Second Catalpa, other times he makes a non-stop flight.

Over these past few weeks, I have see many of these transitory flights and they have been master classes in speed and precision. Unfortunately, my luck at capturing them on video has been poor. On January 23 he was in his favorite conifer. I moved to a spot between this hallowed conifer and The Nest Tree and kept the camera trained on The Wooded Area. He hooted regularly but remained in his needle-covered nook. I hit record on my camera and chided him gently for not flying out yet. The next thing I knew, he was flying past me about twenty yards away. I managed to get the camera trained on him for the last portion of his flight. I later realized that since I was recording before I saw him, that I may have captured some more of this stunning flight. I reviewed the footage and sure enough I got some of the beginning of the flight and its end but missed the middle. Look at the right sight of the screen and at the twelve second mark, look for Charles come blazing out of The Wooded Area!

Charles evening routine is basically unchanged but no less intriguing. He stretches, grooms, hoots and then goes off to hunt. Sometimes Sarah will respond in kind to his hoots and I have observed duets, both short and long. Sarah continues to duet from within the snag/hollow, a mode that I have described as "diva duetting."

With the plethora of Eastern Grey Squirrels in and around The Nest Tree, Charles' hunting often begins close to home; what a locavore. One of his favorite perches near the nest tree is on the end of a dead branch belonging to a tree that faces the opening of the snag/hollow. Seeing him there with his impressive silhouette is never less than memorable. 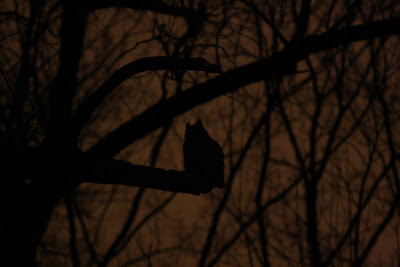 When he does leave the immediate area of The Nest Tree, he has gone south more than any other direction. He tends to stay within The Hilly Wooded Area for a while when he goes south. Over the years I have learned some of the owls' favorite hunting and singing perches in The Hilly Wooded Area. This helps make reacquiring them possible but even still this is one of the trickiest areas in which to reacquire the owls. The number of large trees, loud crunchy leaf litter and rolling hills all add up to create this challenging course. This also makes reacquiring them a memorable and rewarding experience.

A few weeks ago, I followed Charles off south in The Hilly Wooded Area. I quickly reacquired him in the low branch of a tree no more than fifteen feet off the ground and about forty feet feet away from me. Despite my best efforts to approach silently, the frozen ground covered with crunchy leaves and sticks announced my presence. Charles did not seem to notice me and I was glad that he had not. I took up an observation position next to a nearby tree. If I can, I like to have a tree or some other large structure between me and the owls in case I need to take cover.

I continued to watch Charles when I began to hear something rustling in the leaves behind me. Charles took notice of this noise too and he turned around, facing me to get a better take on this sound. I saw him prepare to fly in my direction and I realized I had a second or two to decide my course of action. I chose to move behind the tree and as I did Charles flew low right past where I had just been standing. He flew so close to me that as he passed by me I could have touched him! I was confident that he was not threatening me or threatened by me but I was puzzled that he seemed not to notice me until he flew past me and veered off slightly to the left. Whatever the explanation, it was one of the closest encounters I have ever had with the owls and it left me breathless even though it was mere seconds in length. Such encounters underline a thought I have often; while the park is our park, for the owls and all other fauna and flora it is their home and it is important to be mindful of this distinction.
Posted by Mark at 1:30 PM