Sarah Is Nesting! Part I

January 22, 2010
While I am still working on detailing the events of late December and early January, I think I need to jump ahead a tad. For over three weeks now, Sarah has been nesting in The Possible Nest Tree turning it into The Nest Tree. If all goes well there will be owlets this year!! Here's out it went down...

As December drew to a close Charles and Sarah continued to be very active and amorous. I saw them mate several more times including a few times in the Deer Lake Wet Savannah. I had not seen them mate in that part of the park since the 2007-2008 mating/nesting season. On December 31, I joined Edward Crim and friends new and old for a morning walk through much of the park to mark not only the last day of 2009 but the conclusion of Edward's remarkable project Forest Park 365. Congratulations and a job well done, Edward! 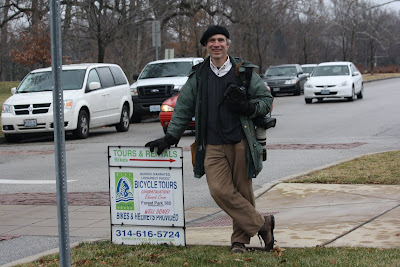 During the walk we made a stop at Charles and Sarah's territory. I scouted ahead and found Charles in his favorite conifer. I showed Charles to the others in groups of two or three. Everyone was thrilled to see him and was amazed at his majestic beauty. I think the biggest takeaway they received was that the owls are just one of many gems in the park that while relatively unknown are there all the time. They just take more time and effort to find and observe. I was a little concerned that we did not find Sarah but I thought that maybe she had taken up a nest spot and that The Possible Nest Tree was a likely candidate. As we passed by this tree I turned to my friend and long-time owling cohort, Chris Gerli, and said sotto voce, "I wonder if Sarah is in The Possible Nest Tree."

The morning tour wound up superbly with one of our last animal observations being a Bald Eagle-amazing! 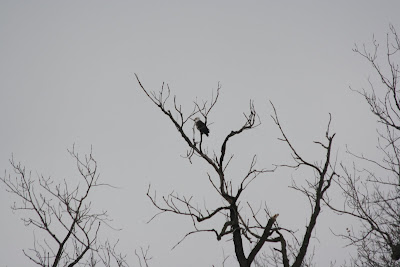 Chris and Barb kindly offered me a ride home, which I readily accepted. I asked if we could stop by the 2007-2008 nest tree. I wanted to itch a small scratch in my mind that hinted that Sarah might nest there again. They kindly agreed to the detour and we piled out to look at the hollow at which we spent many hours watching Sarah, Charles and that year's offspring: Bart, Lisa and Maggie. The hollow was unoccupied by any owls. We discussed the possible nest scenarios and then they showed me where they had followed the Great Horned Owls in Kennedy Forest after these owls had mated on an amazing evening just a few nights prior. That's right, there is a second mated pair of Great Horned Owls in the park. I hope to write more on that later. After a great tour, Chris and Barb drove my tired and grateful body back home.

I arrived home, changed clothes and headed out to run some errands with my girlfriend Wendy. Near the top of the agenda was to get some food into me. Even though I had eaten before the morning walk, the three-and-a-half hour walk had drained my fuel tank to its dregs. As a couple of errands took us south, we agreed that a late breakfast at Chris' Pancakes & Dining would go down a treat. By the time we arrived I was yawning non-stop. Wendy said it was a race between what biological imperative got to me first; eating or sleeping. Thankfully, breakfast arrived in a flash and was ingested at a not-much slower rate. Revived, we finished our errands and went home. I knew I would go back to the park; I had to find out where Sarah was. As sunset approached, I strapped on my go-to-the-park clothes, cameras and binoculars and headed to the territory of Charles and Sarah.

I found Charles again in his favorite conifer. After waking up he began to hoot and then flew off to an edge along the south side of The Wooded Area. He hooted directly at The Possible Nest Tree for several minutes. He then flew to a tree just in front of the snag/hollow of The Possible Nest Tree and continued to hoot in its direction. From within The Possible Nest Tree came the muffled sound of Sarah hooting from within the snag/hollow of this tree. She was doing what I have dubbed "diva-duetting", which I described in a recent post as, "It is as if Sarah is some great operatic diva like Maria Callas, Joan Sutherland or Kelly Clarkson. She refuses to go onstage due to some minor mishap but she still insists on performing for her adoring public... I always enjoy hearing diva duetting, as it seems to illustrate the deep bond between these two remarkable owls."

But unlike the events of Christmas evening described in said post, when Sarah flew into the snag/hollow and diva-duetted, on this night Sarah was already in the snag/hollow-a substantial difference. She had likely been there earlier in the day when we walked by it and for many hours before and since then. Sarah emerged from the nest and she and Charles mating shortly thereafter. This was the tenth time I had seen them mate since December 10, making it the second time I observed them mating 10 times or more in a breeding season. You can see them mate below, just move to the 1:25 mark.

I followed Sarah off northeast near when she reversed direction and headed back to The Hilly Wooded Area. I followed her again and as I got into this area, I was stunned and thrilled to have Charles fly directly over me, hooting in flight about twenty feet above me. After I caught my breath, I wondered if having seeing Sarah already in the snag/hollow that he knew that she was nesting. Knowing this, perhaps a biological/hormonal switch was thrown inside him telling him that he was on full-time food acquisition duty for both he and Sarah. Perhaps he may have been making his first food drop. I did not have to wait for long for Charles to return again. He flew right by me at great speed about thirty feet away from me. He and Sarah resumed their duet on a tree just in front of The Possible Nest Tree and they mated again!! This was the first time I had ever seen them mate twice in one night, in less than an hour in fact and I was completely flabbergasted. Even now I cannot believe I saw them mate twice in a night! Charles flew back near me and landed, making some short but intense and rapid hoots.

After I picked my now very sore jaw off the ground, I watched them for a little while longer before heading home to tell Wendy the amazing news.

While I was reasonably certain that Sarah was nesting and this tree was this season's nest tree, I like to be completely certain of such things. Long-time owl friends know that I like to give things like nesting or owlet dispersal a little more time before I "make that the call." With this in mind, I returned to the park on New Year's Day but a driving snow made me "make that the call" that I would not see the owls that night. Thankfully, Barb and Chris had more luck that night with the Great Horned Owls in Kennedy Forest; they saw them mate again and witnessed some close fly-bys and other heart-stopping owl behavior.

On January 2, I made way back to their territory and sure enough Sarah was already in the snag/hollow of the now very likely Nest Tree! I wanted to make sure that I saw her in this spot with my own eyes for three nights before I made the call that nesting was occurring and that this was the nest spot. I was back again on January 3 and again Sarah was in the snag/hollow. I made the call; Sarah was nesting and The Possible Nest Tree was now the The Nest Tree or The 2009-2010 Nest Tree.