I was leading an owl prowl last night, more on that particular prowl in an upcoming post, and somewhere between the beginning of the prowl and the last portion thereof, one of the owlets fledged! Not only did it leave the nest it got out of the nest tree entirely!  No branching in the nest tree-just out and about wholesale. The owlet was at the base of the nest tree delicately perched on top of some reeds by the river way.  My biggest concern was that it was 3-5 feet from the water.  Even though the water is shallow, it is cold and these are owls not ducks or geese.  I was also concerned about potential predators but thankfully Sarah was nearby. The owlet appeared uninjured and safe.  It adjusted its wings when it needed to balance itself. Here's the little one last night. 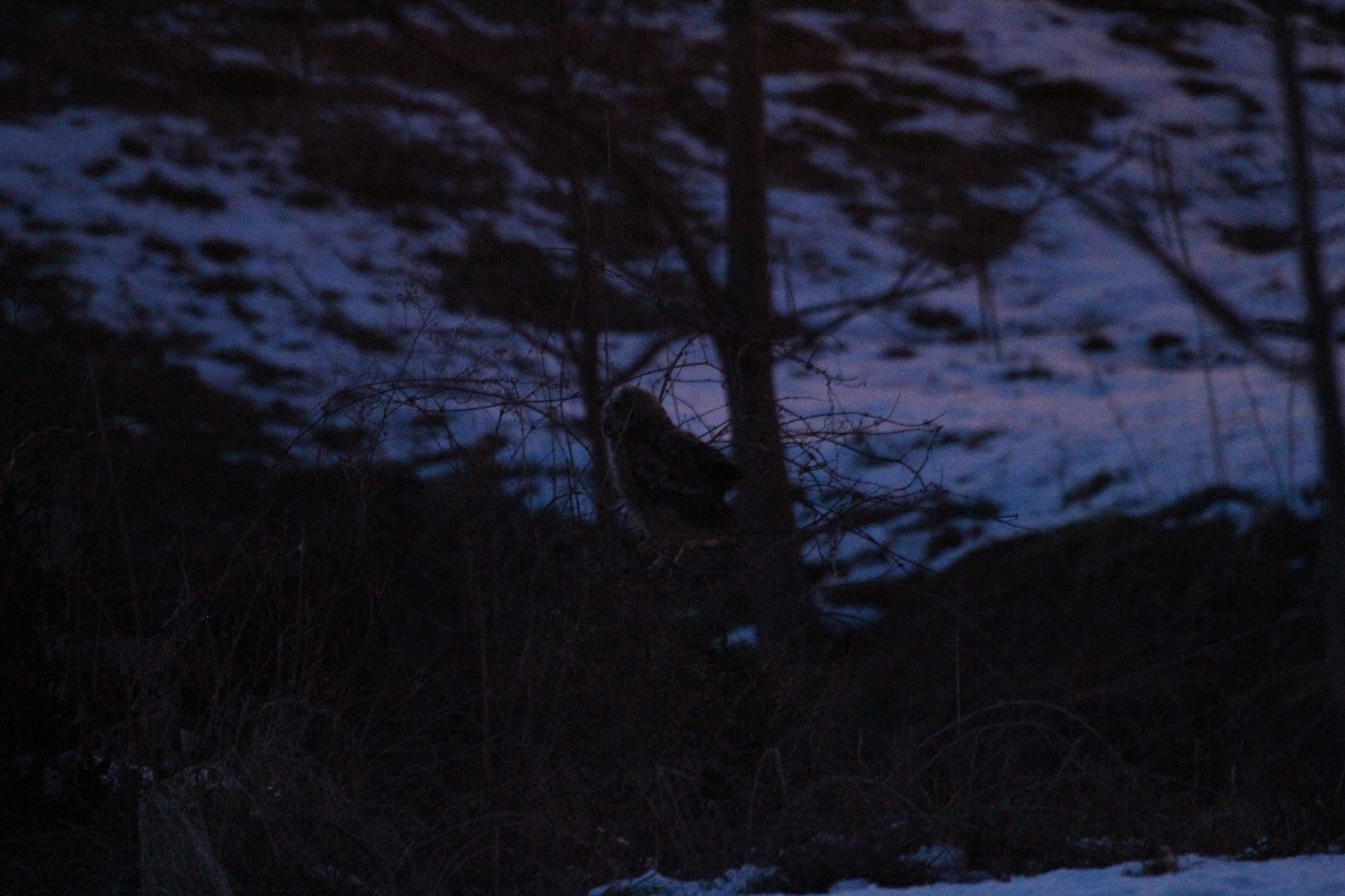 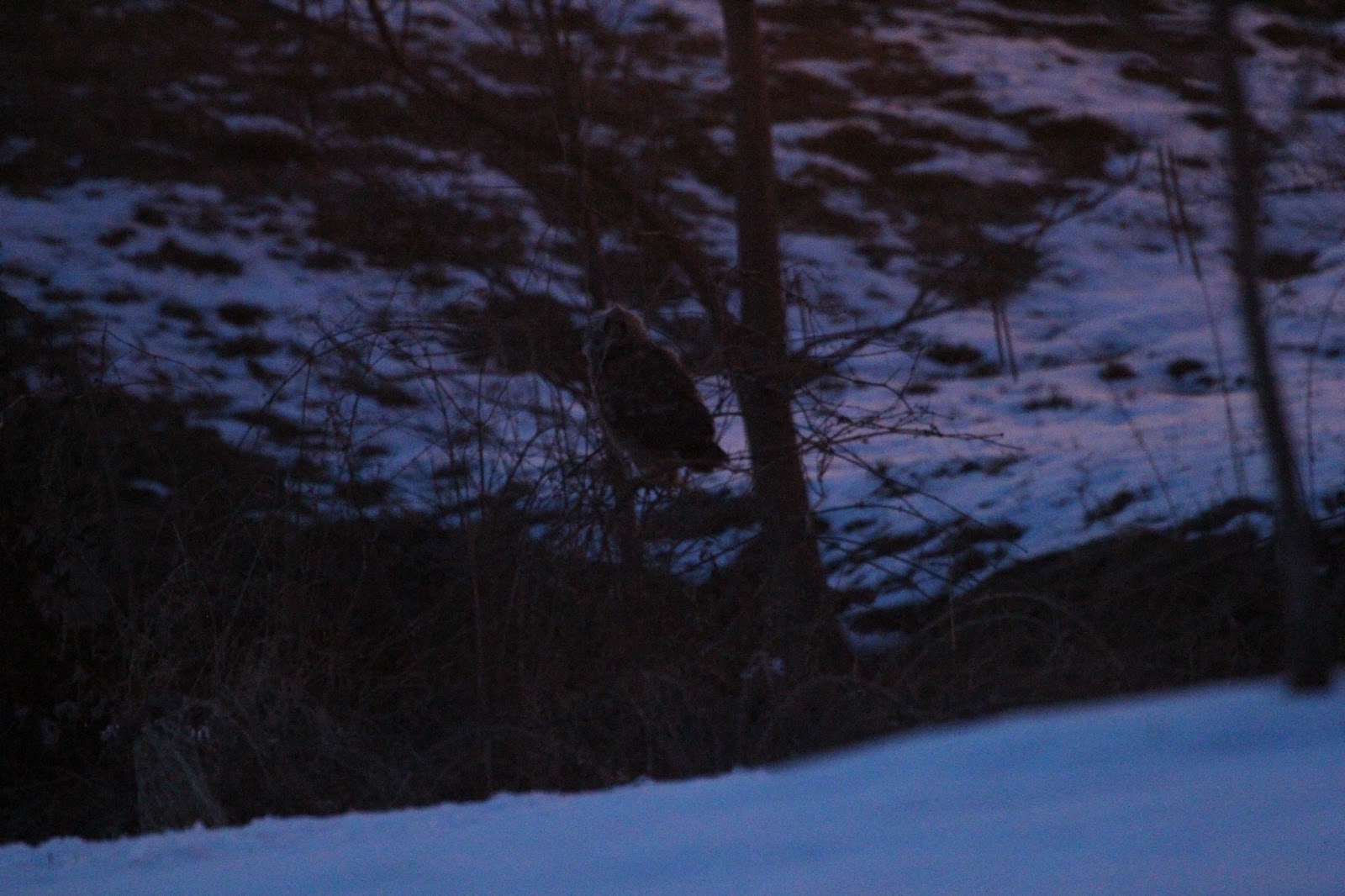 I stopped by this morning with my binos and my point-and-shoot camera mere minutes before sunrise and was pleased to see that the owlet had made it into the The Wooded Area.  It was perched in a low branch in The Training Area not far from the base of The Overlook Hotel Tree. 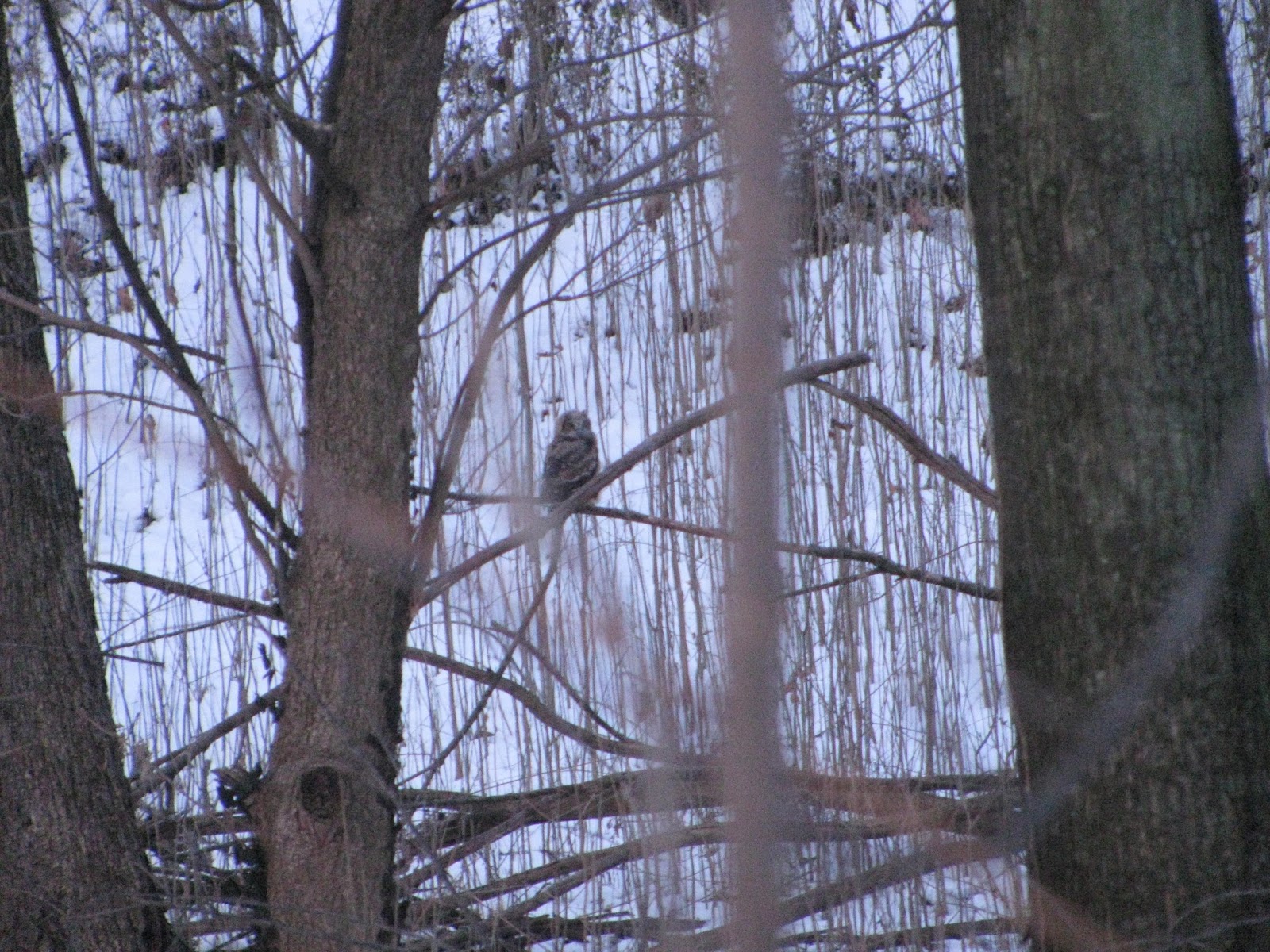 The other owlet was still in the nest hollow and Sarah was perched close to the hollow.  Charles was nearby in The PX Tree, a newly named but much storied tree in their territory.  It was touching to see the whole family so close together.  Some commuting crows harassed Charles and Sarah but the crows did not appear to notice the fledged owlet, thankfully.

So how did the owlet get out of the nest?  My best guess is it got out of the nest courtesy of The Three Fs: Fly, Fall and Flail. These three verbs are key to the nest departure locomotion of fledging GHOs. Space issues may have contributed to this owlets departure .  The entry/exit point of the hollow was getting more crowded day by the day as the owlets grew.  Before I left last night, I saw Sarah fly out of the nest hollow before landing in The Second of The Three Trees. I wonder if Sarah's presence in the nest and the subsequent decrease in space became a precipitating factor leading to the owlet's departure.  Perhaps the owlet was just ready for this huge step in its life.

There is much more to say about this fledging but in the meantime, if you come to the park to see the owls please be extra cautious and careful.  I would strongly suggest not entering their territory from the road closest to the nest tree as you might find yourself between owlet and mom.  Do not get close to the fledged owlet and be mindful of Sarah's whereabouts at all times.  Do not risk incurring her protective wrath. Last week my friend Robin Street-Morris saw a hawk of the genus Buteo, likely Red-tailed Hawk flew near the nest and Sarah chased it off vehemently.   You would not mess with a hawk, do not mess with an animal that does mess with a hawk.  Fledging is one of the most dangerous times for a young Great Horned Owl.  They are not strong fliers yet and dangers abound.  Last night during my prowl I compared fledging to a human parent watching its child take its first steps...in Times Square.

Thanks for reading!
Posted by Mark at 8:49 AM