Well, if the evening of March 25 and morning of March 26 were not exciting enough with seeing one owlet fledge and make it into The Wooded Area, last night, March 26, just took everything to a whole new level.  To cut to the chase, there are three owlets!  Three!  As of last night, two have fledged into The Wooded Area and one was still in the nest. I was thrilled to finally see two at the same time just over a week ago but we never saw more than that at once and so we thought that it was two owlets and no more.  Two-three is typical for Great Horned Owls and Charles and Sarah have mostly had two per year.  They had three owlets in 2008 and 2010. Their average is very nuclear family in size: 2.25 owlets per year.   With last year's drought I was happy that they nested and had two owlets period so seeing three is a delight and especially interesting.  Here's how I found all three last night.

I arrived at The Wooded Area about an hour and a half before sunset as I wanted time to look for the fledgling I had seen that morning and the night before then.  I found Charles quickly in his new favorite conifer, in which I had not seen him for over a week.  I headed down to The Arena and saw the one owlet still in the nest.  I carefully walked around the perimeter of the eastern half of The Wooded Area looking for the fledgling and Sarah. No dice. I wondered if the owlet had covered more ground like the owlets had in 2011 so I walked back to where I had found Charles to look around that area.

I found Sarah deep into The Wooded Area not far from her late summer/early fall perch.  I did not notice at the time but a Red-bellied Woodpecker was just to the right of her as you can see here. 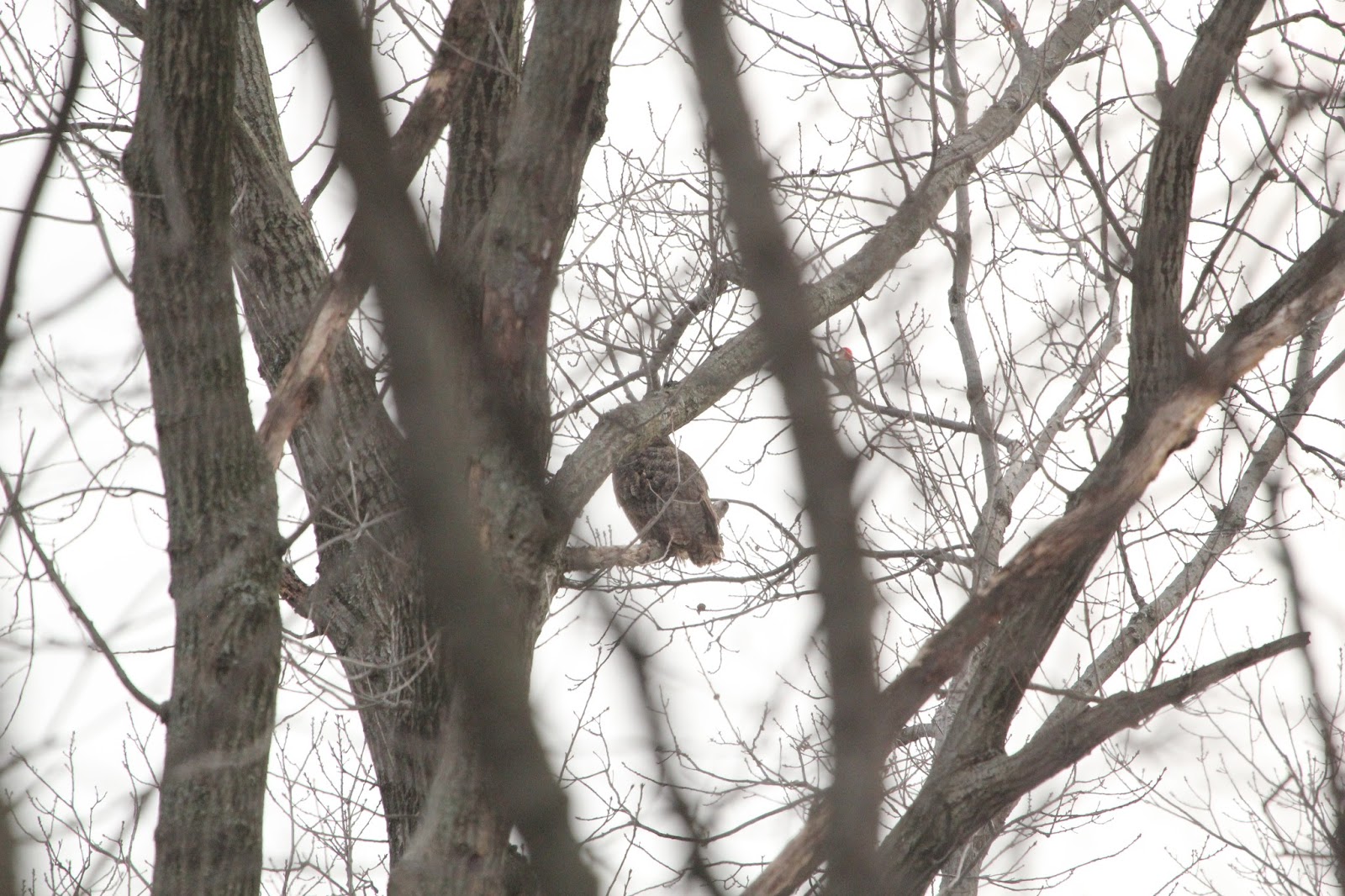 I looked between the two parent owls and there just 20-30 feet from Charles in a low, thin tree was the fledgling.  Incredible.  It had covered 50-80 yards since that morning.  Check out how fluffy its cheeks are! 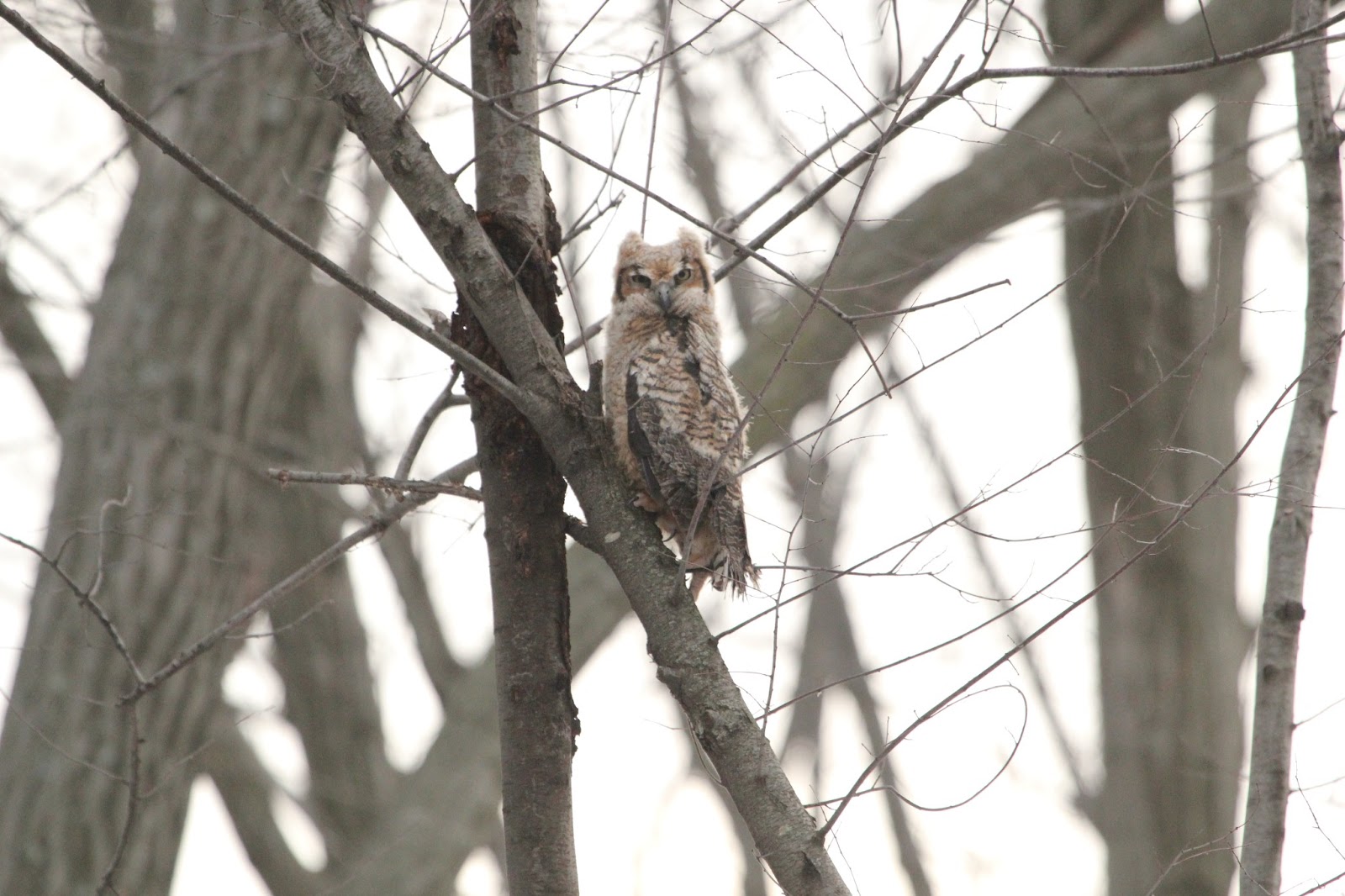 Charles had pivoted in his new favorite confer and I was able to see more of him. 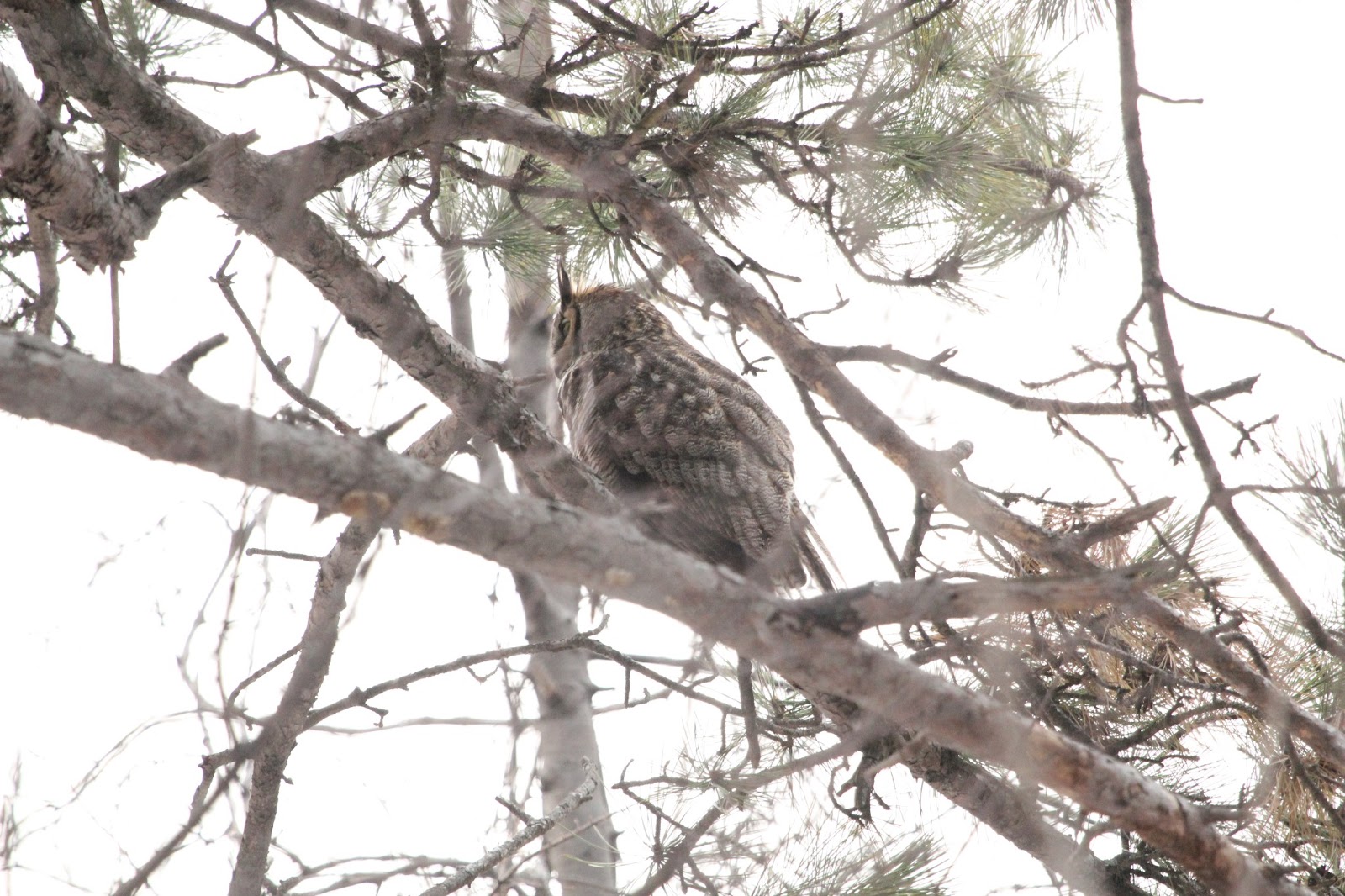 I watched the owlet as it kept a low profile and watched its new surroundings.  As I did so, a helicopter flew by and the owlet watched the chopper's progress with much curiosity. 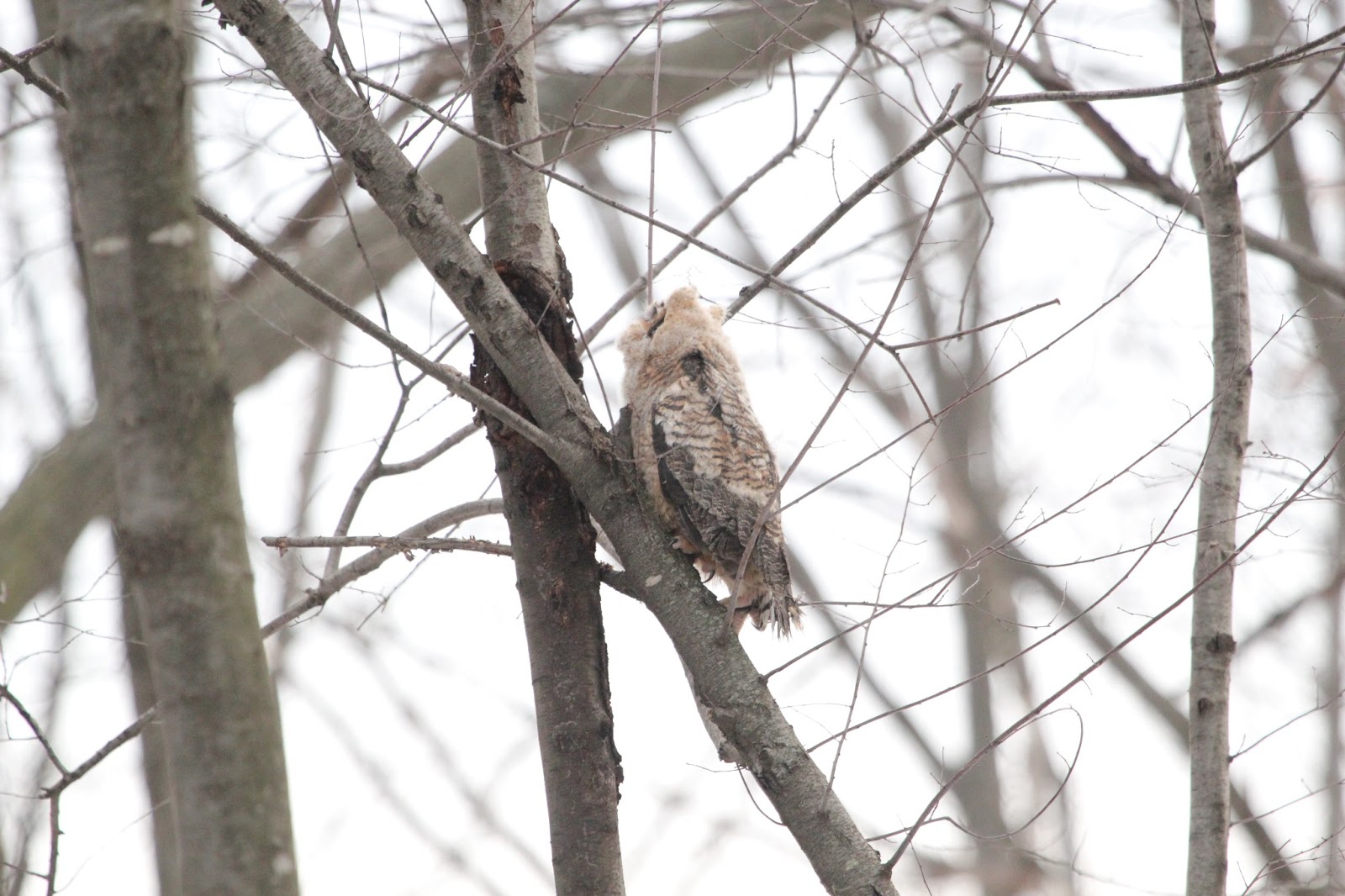 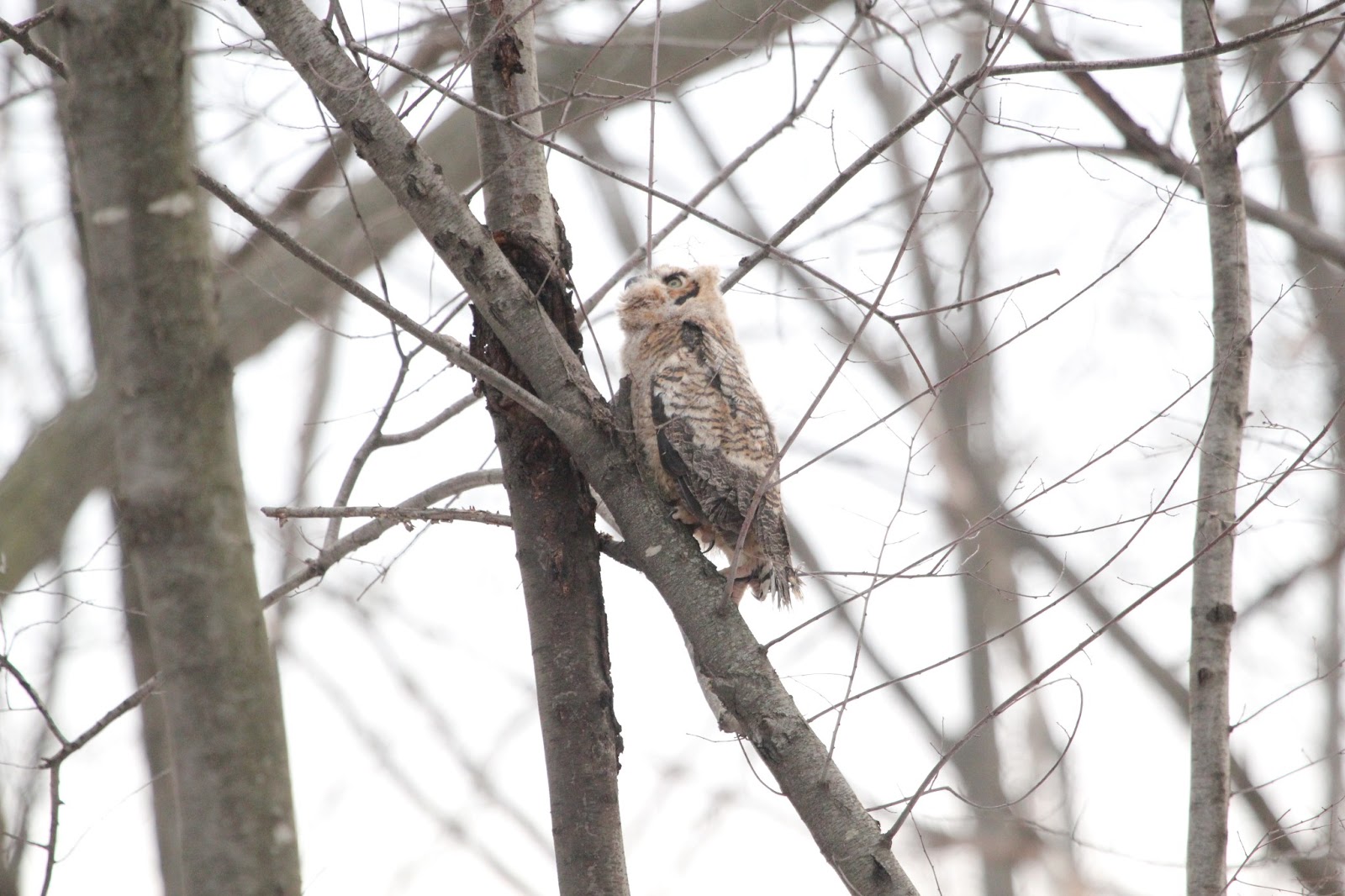 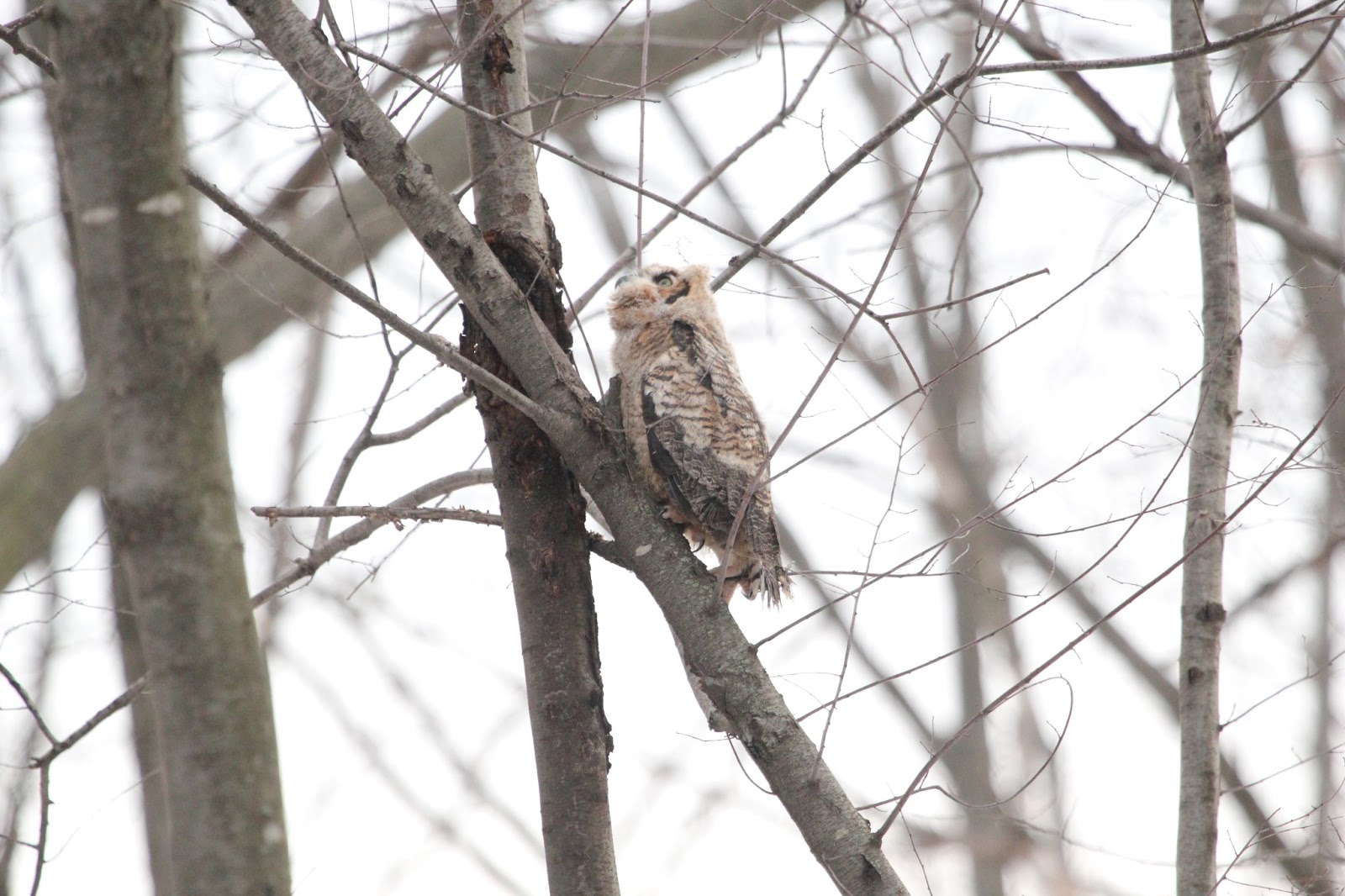 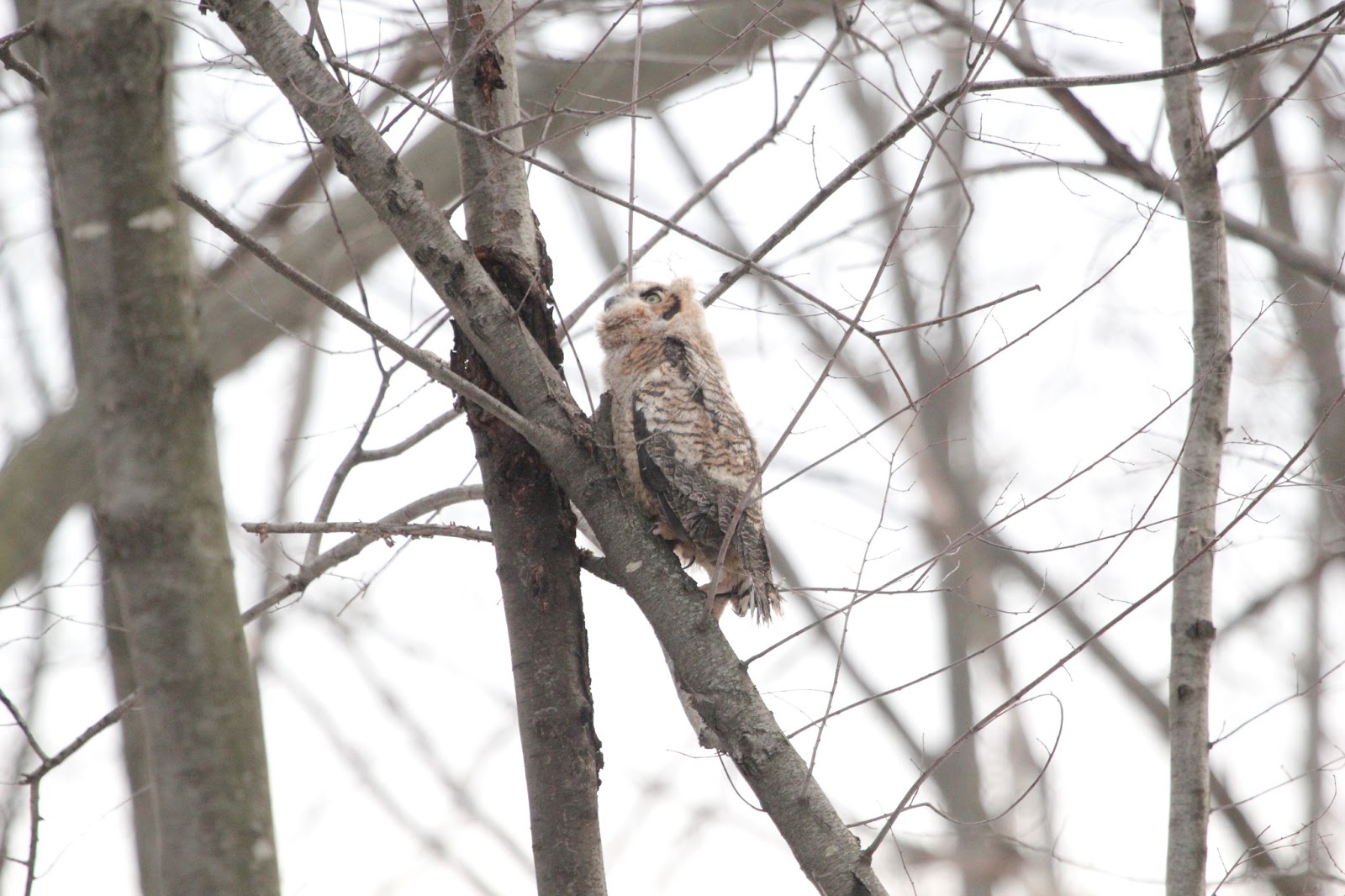 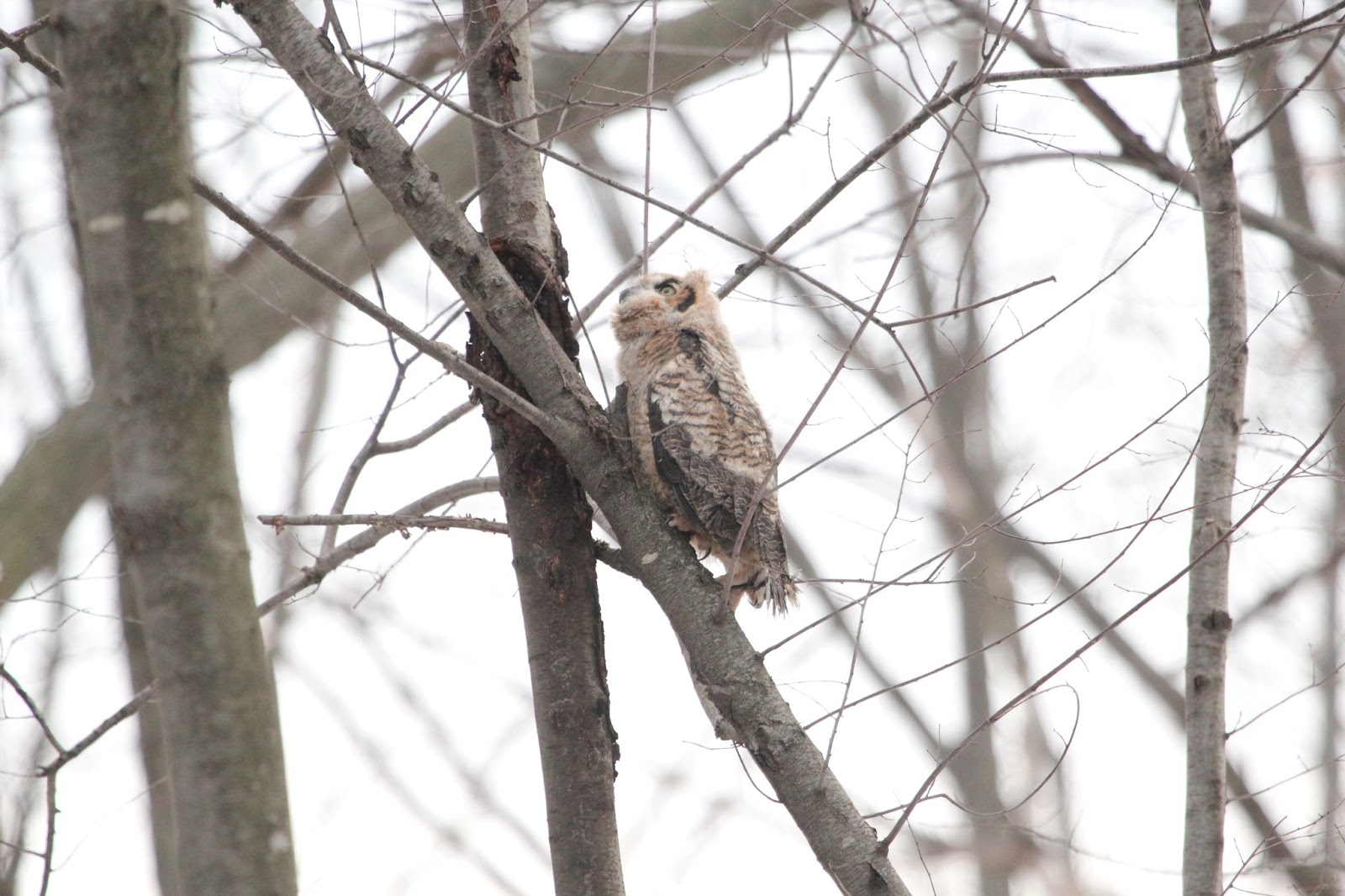 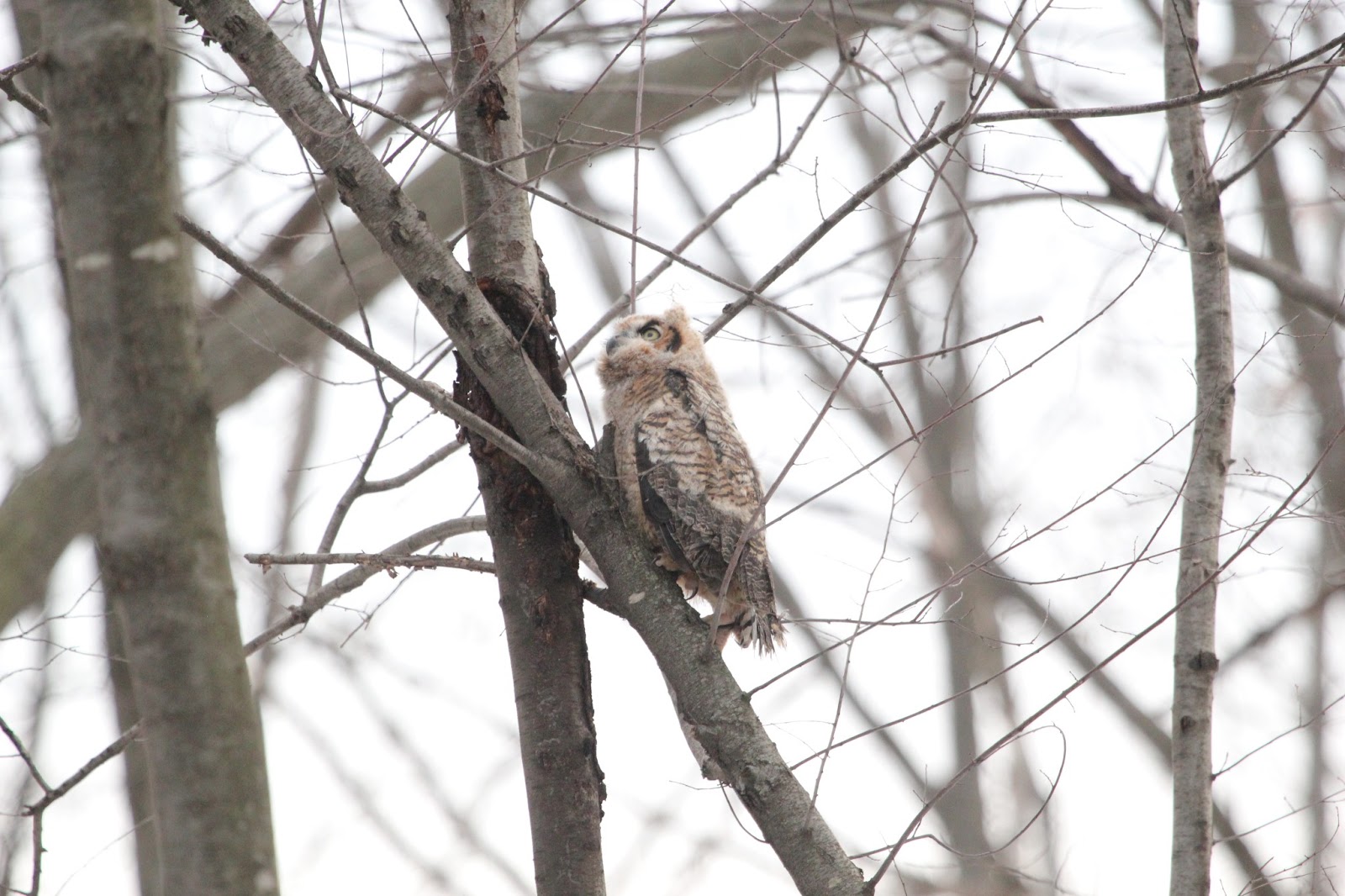 Amazed, I  headed back down to The Arena to see the owlet still in the nest.  I could no longer see it in the nest and decided that it had gone deeper down into the nest, a perfectly normal activity.  Charles began to hoot and so I headed back to him, Sarah and the fledgling.  Charles had moved to The Archy Tree in a more atypical spot within this tree, which is mostly used in the summer and early fall. 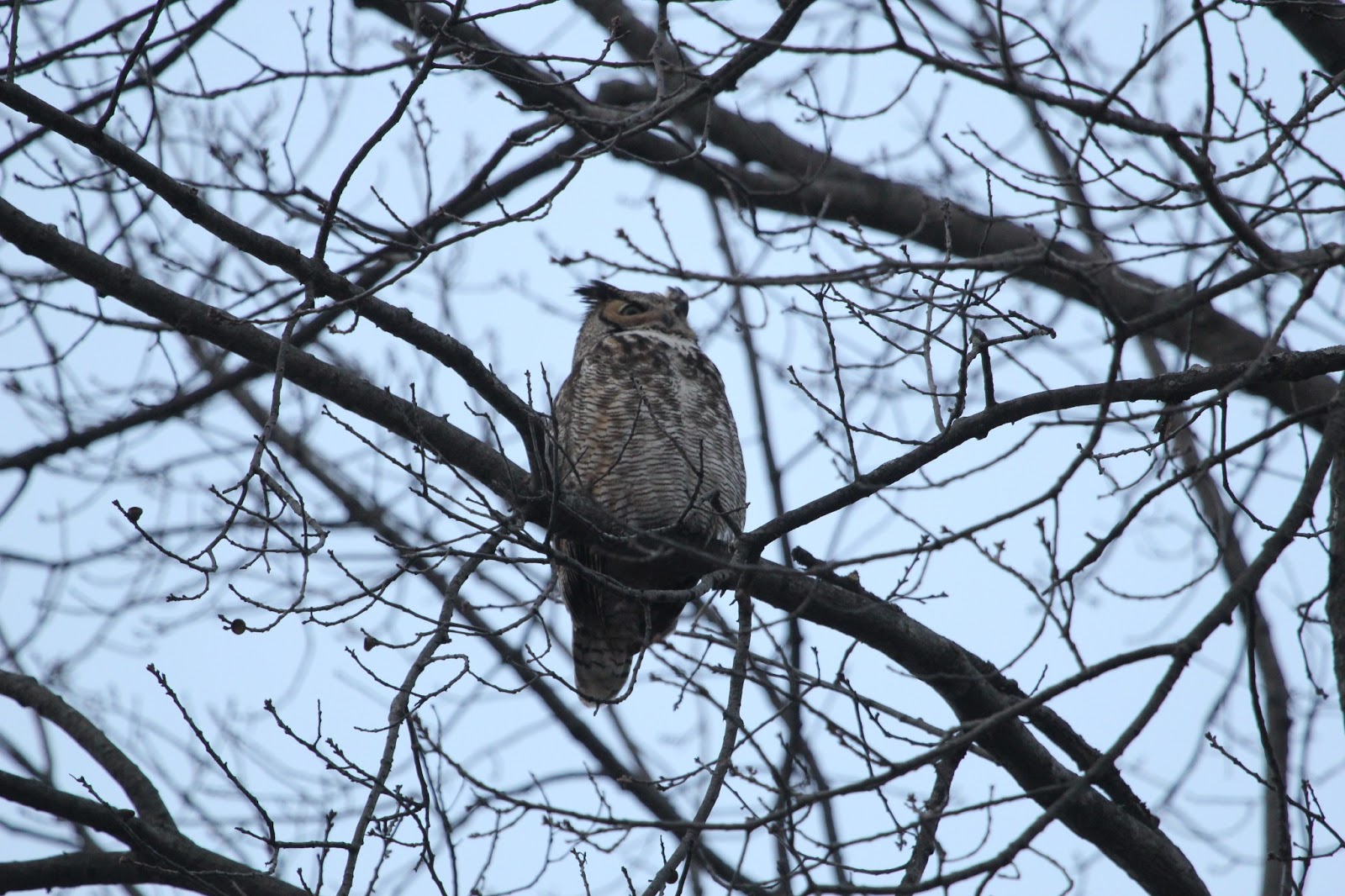 I found the fledgling and as I looked in the area of where Sarah was perched, I saw an owlet  trying to keep its balance while perched in a low, small tree near Sarah's perch.  I looked back to the fledgling near Charles to see if it had flown to this new spot but it was still there.  This balancing owlet was a second fledgling! 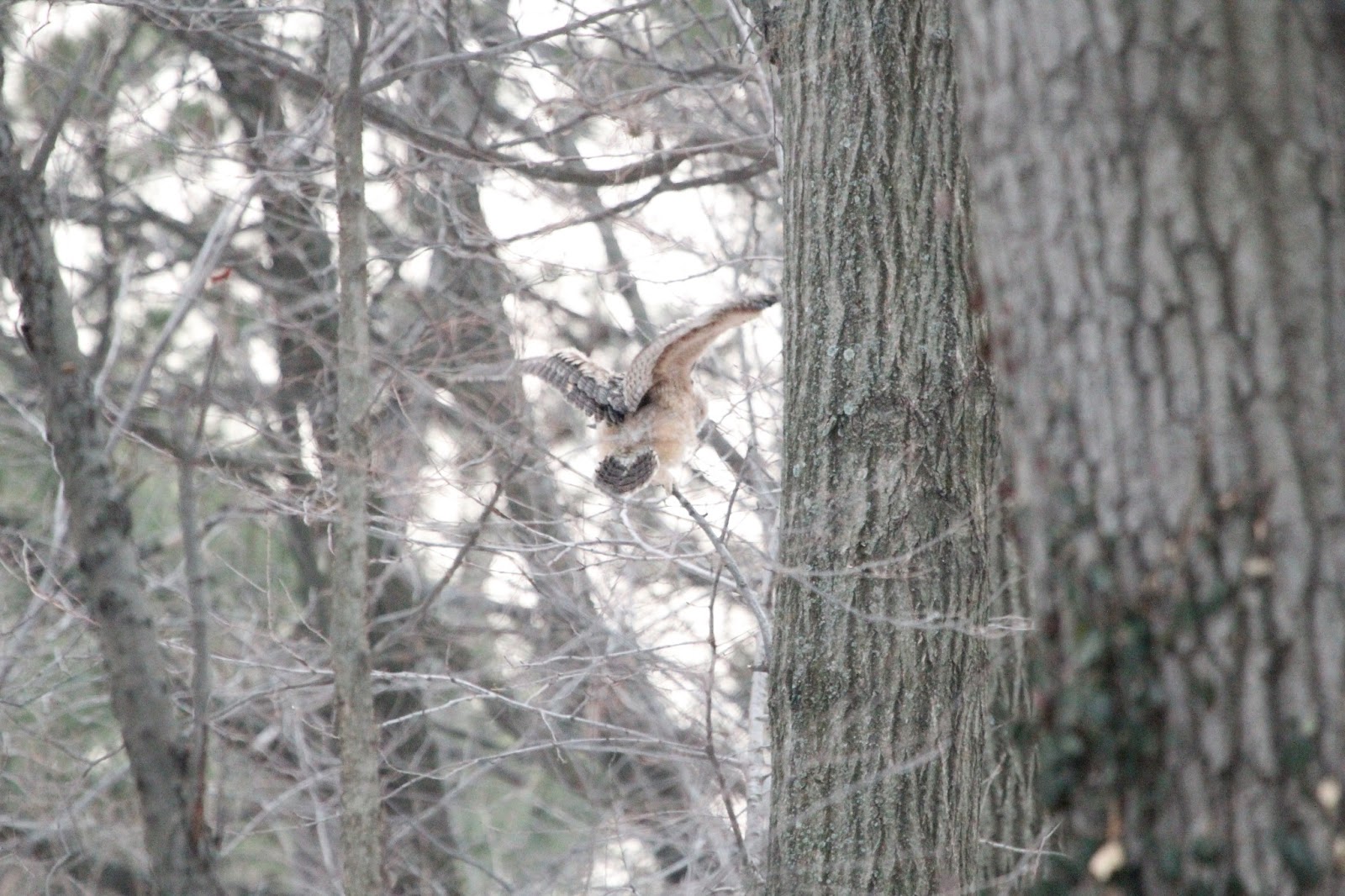 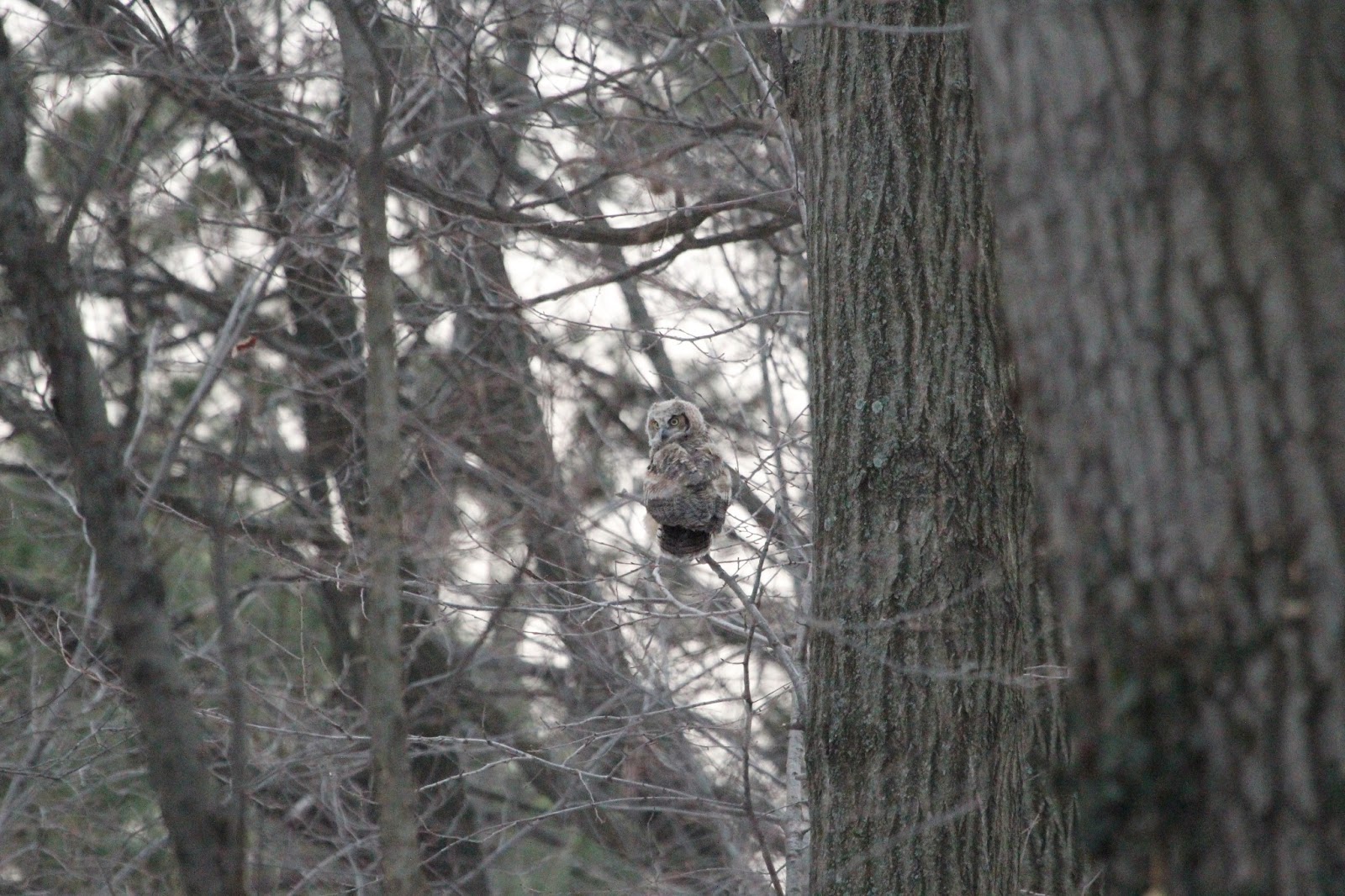 This second fledgling was bigger than the first.  I think this second one was in fact the owlet that I saw fledge the night prior judging by its size.  Furthermore, I think this fledgling near Sarah is bigger and older than the fledgling near Charles.  This fledging of these two owlets was reminiscent of how the 2011 owlets fledged, which you can read about here.  The big difference was that in 2013 we saw the owlets "hit the gym", much more than in 2011.

By now my mind was reeling.  Were there three owlets or had the one seen in the nest mere minutes ago fledged and moved 80 plus yards from the nest?  The former was the much more realistic option but I had to confirm it.  Back to The Arena I went and there in the nest, again visible was the owlet, smaller and younger than the others. 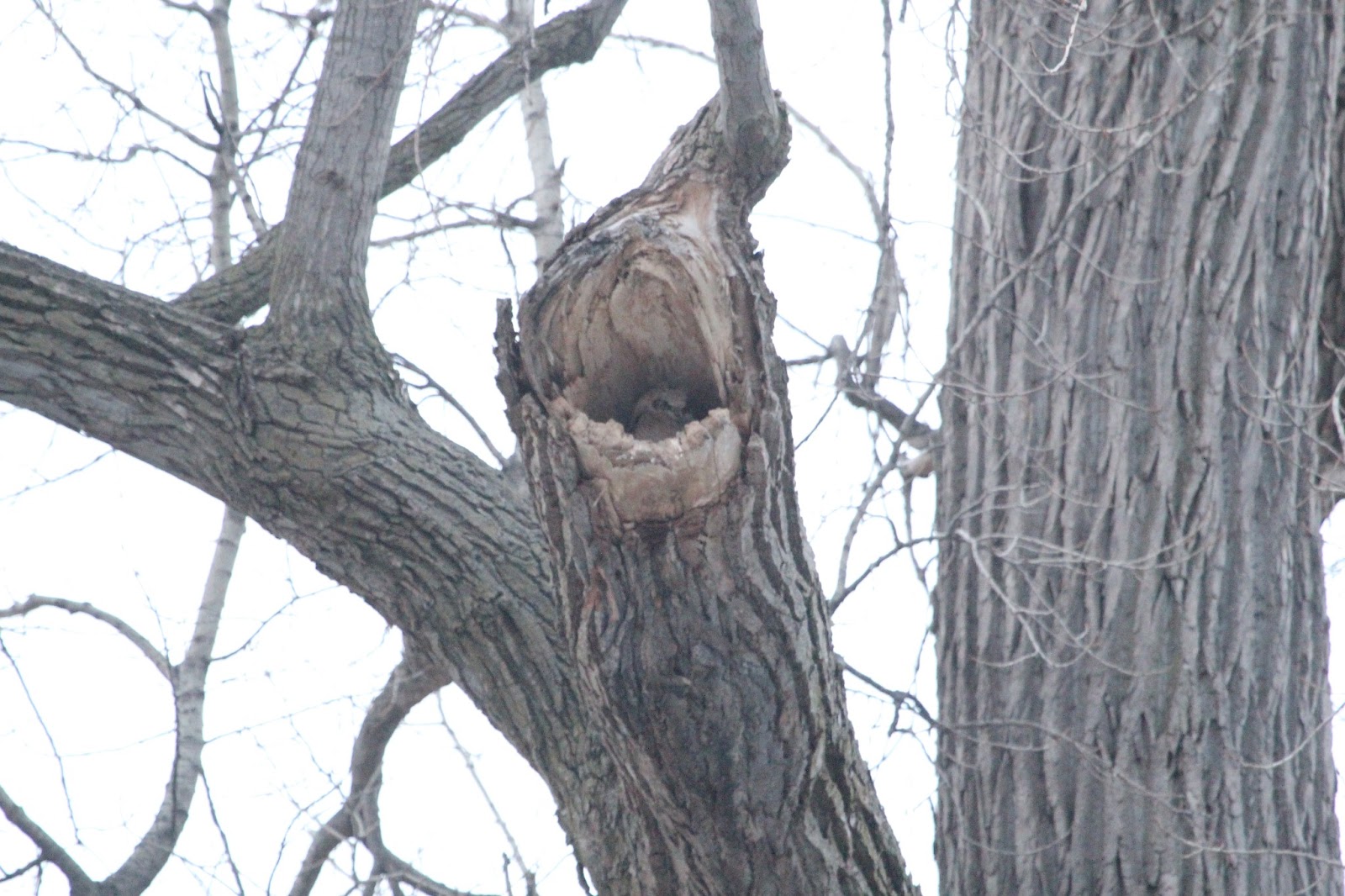 I grinned with delight and quickly texted the news to my girlfriend, Wendy, and several owl friends and mentees.  As I did so I was joined by Taffy Ross a frequent park goer and owl fan. Taffy marveled at the news and as she watched the owlet in the nest, I saw a car pull up and a couple get out and  look in The 08-12 Nest Tree.  I called them over and it turns out they, Peter and Beverly Danis, had been reading my blog, which was great to hear. They began to watch and photograph the owlet and ask many great questions.  Michael Sprague then stopped by and joined the group.  Michael joined me for an owl prowl the night before and he spotted the fledgling first. He is a journalism student at Lindenwood University who is doing a piece on the owls and my work with them for his online journalism class.  He hopes to turn this class project into an article for the university's student newspaper. Michael is co-editor of that paper's sports section and active sports blogger as well as you can see here.

The news of the three owlets amazed Michael during his brief stay.  Taffy, the Danis' and I headed up to see the others.  Taffy saw Charles but had to return to her keen for a walk dogs.  Peter and Beverly joined me and we began to hear the owlets beg for food and the second fledgling made the first owlet flight of the year that I was able to see.

A Cooper's Hawk appeared near Charles and he glared at it before the accipter departed in great haste.  Sarah had food in her talons, something mammalian, and she changed positions a couple of times to try and get closer to the not yet overly mobile owlets. Here she is with the food and taking a nibble for herself and then a shot of her with the food in her bill.  The owlets begging and Charles hooting continued apace. 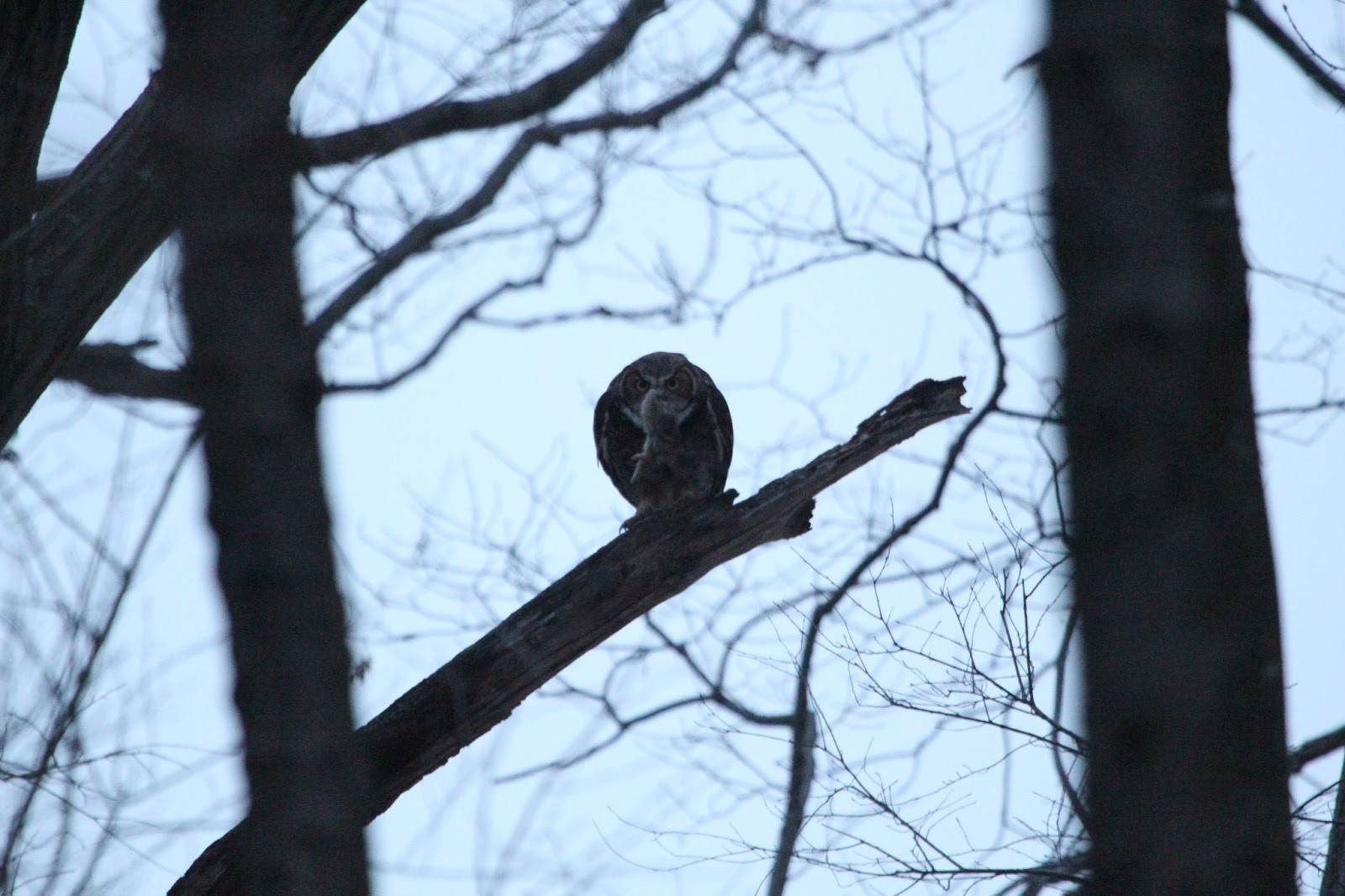 Sarah looked especially intense and so we backed off and watched them from a distance before heading down to The Arena once again.  The owlet in the nest was still there but more prominently in view. Peter and Beverly headed home and I watched for a little longer.  Charles' hooting stopped and I went back up to find him gone and the owlets quiet, leading me to believe that Sarah was able to find a way and a place to feed them.  The larger owlet was visible where I had first found it.  I walked home and showed Wendy the pictures and she cooed with delight.  My friend and owl mentee and master of Forest Park, Chris Gerli of City Cycling Tours called me and we had a great discussion about these owlets with much analyzing and comparing with the previous years owlets.

Thank you for reading! Before I go here is one last picture of the smaller fledgling dozing in its perch. 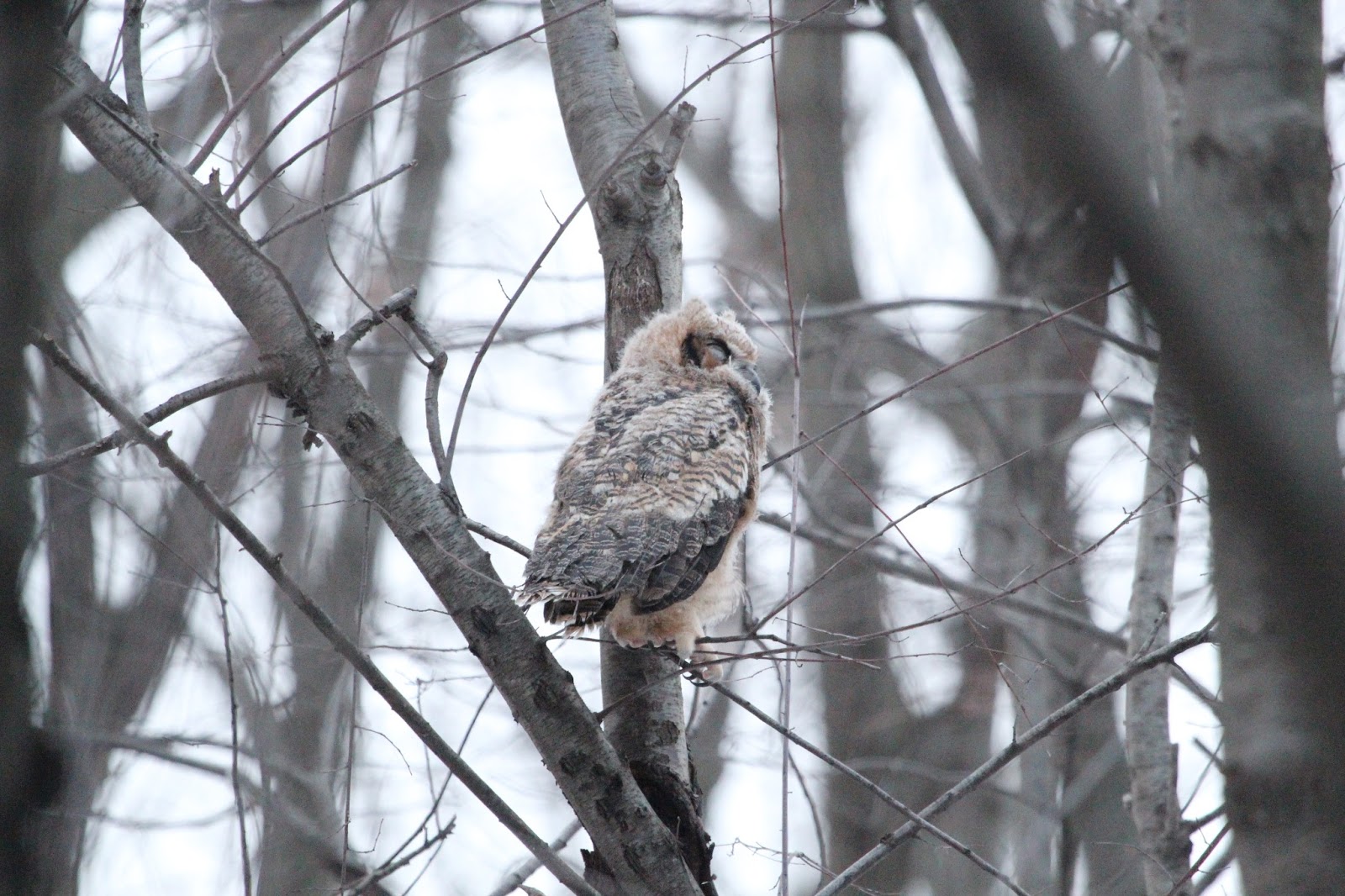