Happy St. Patrick's Day!  We have much to celebrate.  Last night two owlets were seen for the first time!  My friend and owl mentee, Brenda Hente, called me last from the nest site last night and said, "Congratulations. There are two owlets. I'm looking at them both right now." I marveled at the news and shared it with my girlfriend, Wendy, and she exclaimed and smiled with delight.  Just a short while before Brenda's call, I showed Wendy pictures of the owls and owlets I had taken on my brief visit to the park yesterday.  As I looked at some of the pictures of the one visible owlet shot at different times, I noticed some differences in how the owlet appeared.  I wondered if these difference were due to where the owlet was and what it was doing or if these were two different owlets.  I'm glad that I had this hunch before Brenda called but was even more happy to hear from her that she was seeing two owlets at the same time.  Brenda is on an owlet streak this year both with Charles and Sarah's progeny as well as the now three owlets, Stan, Lil and Red, hatched by the owls, Will and Kate, that Brenda watches in another local park.

Prior to Brenda's sighting there had been only one report of more than one owlet seen at the same time and that was from Crystal Camp a Horticulturist for Forest Park Forever.  Crystal's area of responsibility includes the core of the owls territory.  On Friday she told me that she may have seen two but was less than certain as she said she did not have binoculars and her eyesight is not up to snuff.  Still, it was interesting to hear and my vigil at the owls nest continued. Many other folks have been coming by and my thanks to them including Brenda, Barb, Chris, Rusty, Pam, Luann, Jane, Ted, and Raphie. Biggest thanks to Wendy for her continuously amazing encouragement and support!

Here are some photos that Brenda got yesterday of the two owlets. You can definitely see differences in age because of the differences in size and facial disk development. 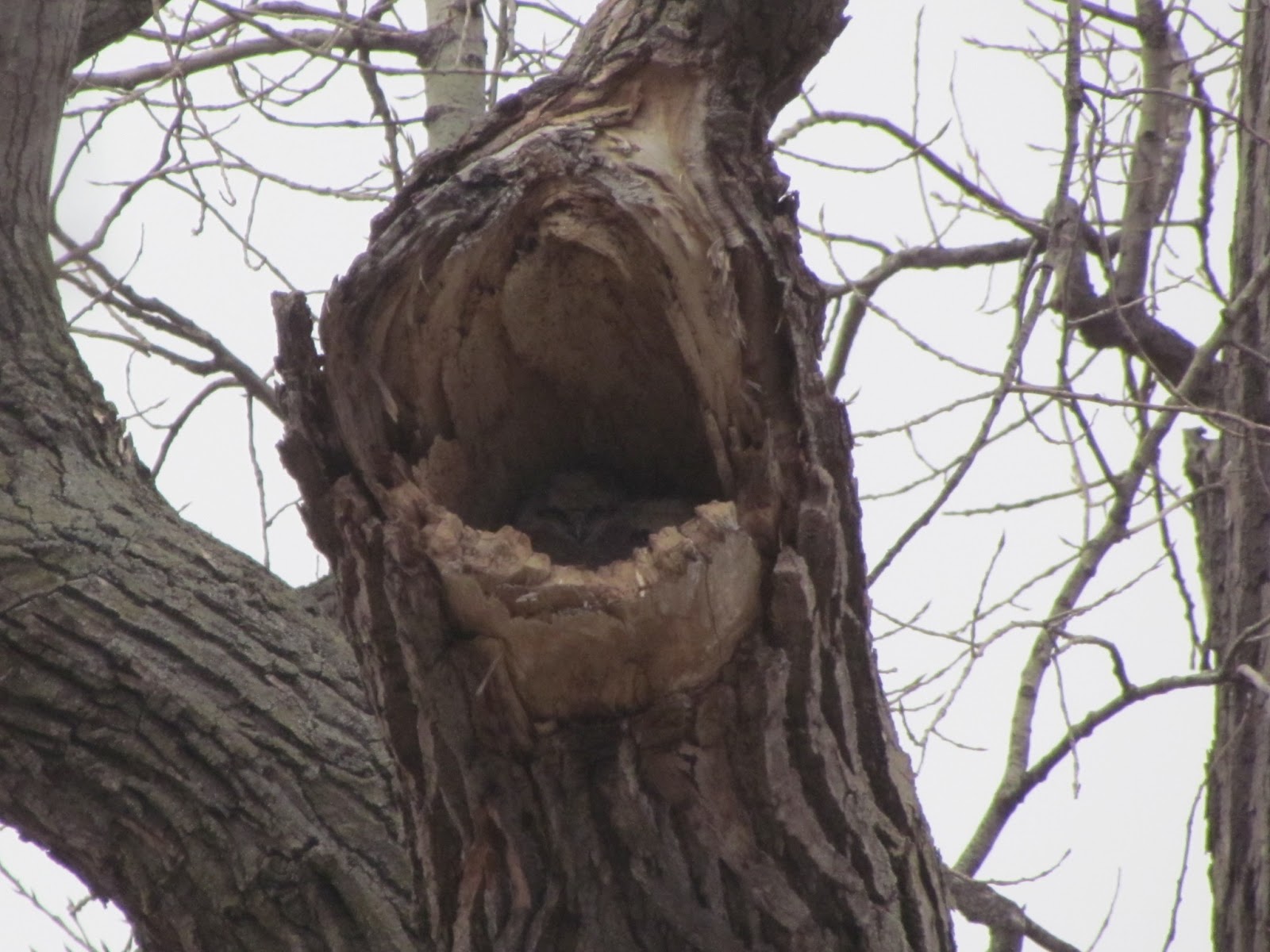 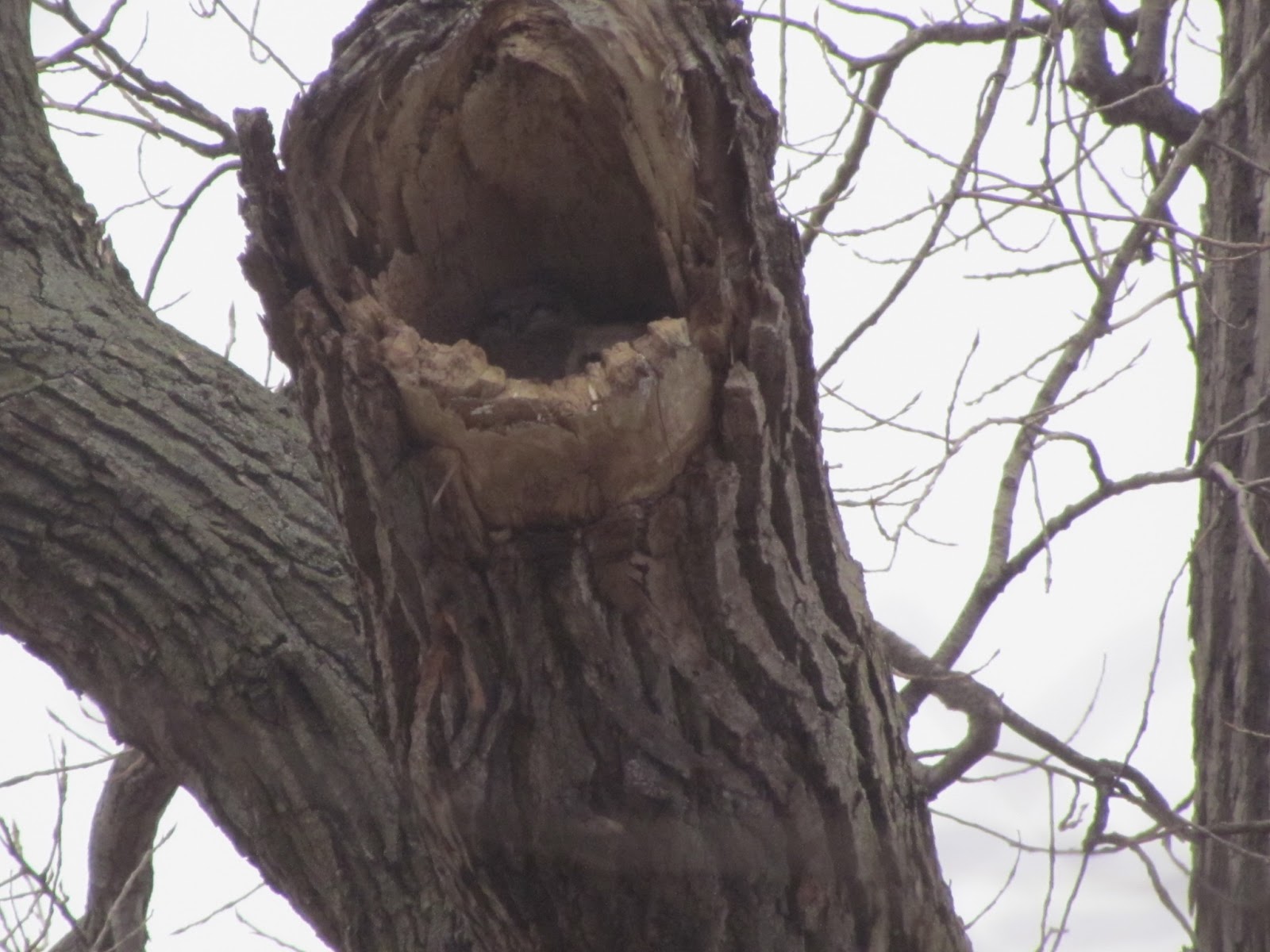 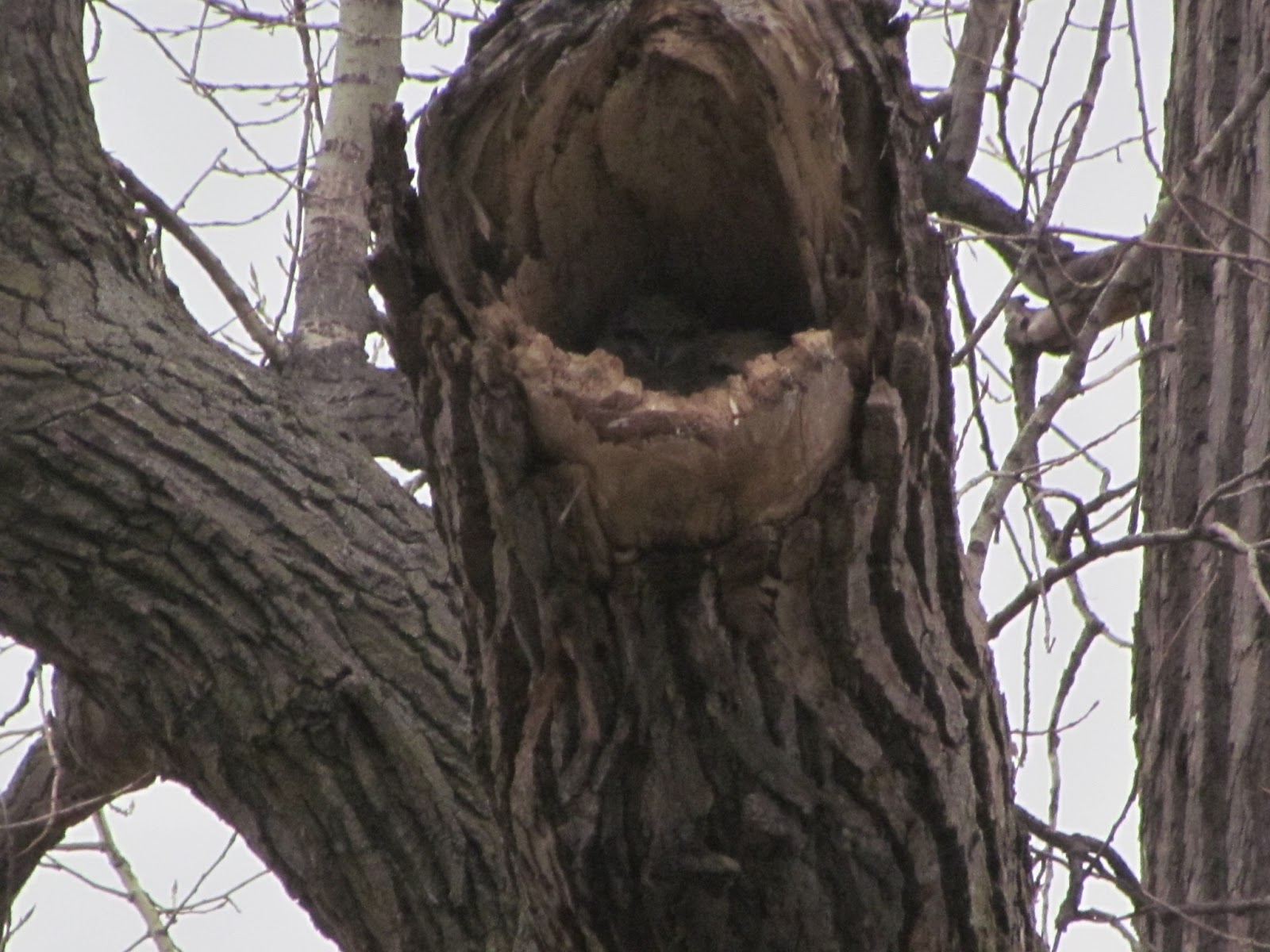 Now here are two of my pictures yesterday of what I was suspecting were two different owlets.  The pictures were taken twenty minutes apart.  In the first picture Sarah was out of the nest on a perch where she and Charles mated several times.  In the second picture Sarah had returned to the nest and descended deep within it. 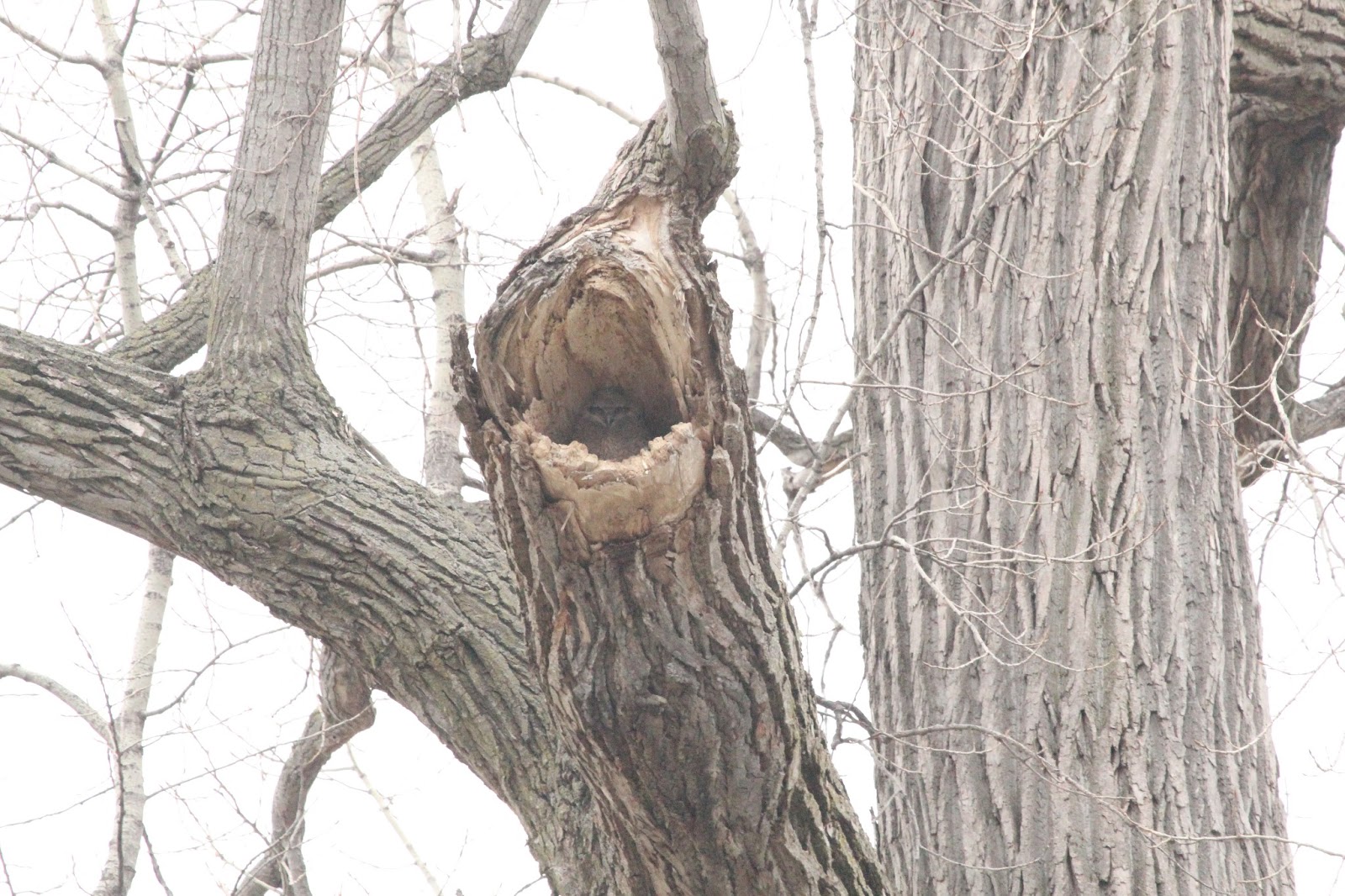 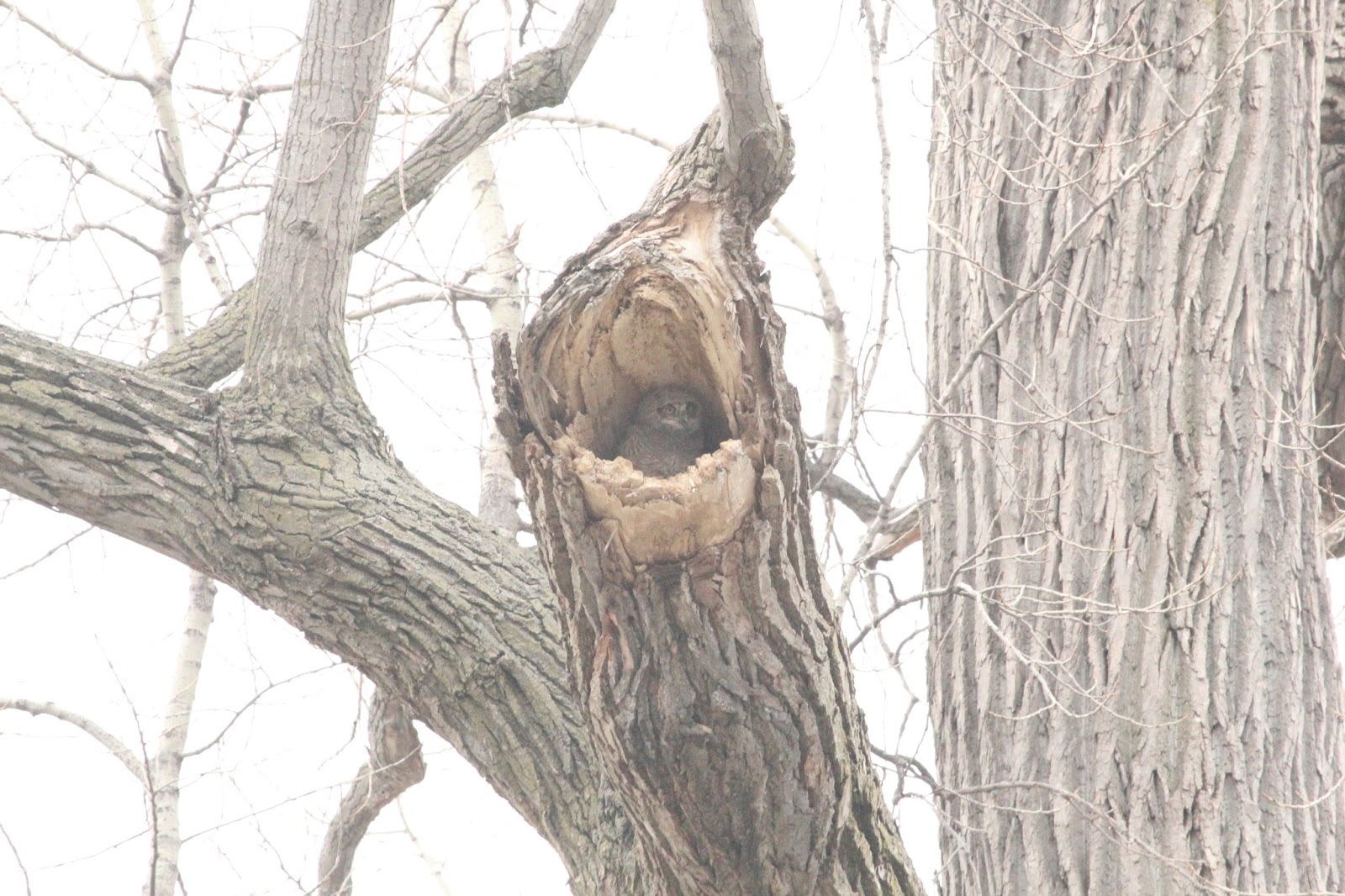 Great stuff! I have a name for one of the owlets picked out, now I just have to think of a second one.  I will post here when I have the second name determined. Thanks for reading and I hope see some of you at my talks this week as described in my previous post!
Posted by Mark at 9:26 AM